Very few players in the NHL can do what Nazem Kadri does. He’s a former 7th overall pick in the 2009 draft. Going 1st overall in that draft was his London Knights teammate and now teammate in Toronto, John Tavares. And then also ahead of him on the center depth chart is former 1st overall pick Auston Matthews. So he’s a lottery pick talent who is playing 3rd line minutes since he has 2 former 1st overall guys ahead of him. I think a lot of guys with Kadri’s skillset would get all pissy about playing on the 3rd line at this point in their career but Kadri lives for this shit. Not only is he coming off back-to-back seasons where he put up 32 goals after getting great matchups on the ice (currently on pace for another 30 goal season), but that position also allows him to be a grade A shit stirrer out there. He’s a pest, he’s a guy who you hate to play against, he gets under the opponent’s skin and he takes a lot of players and teams out of their game. Case in point, this opening faceoff last night in San Jose.

Barclay Goodrow, a player who has no business taking Nazem Kadri off the ice for 5 minutes and especially not so on the opening faceoff, tries to get Kadri to drop the gloves to start the game. It’s a joke that Goodrow was out there for the opening faceoff in the first place, and Kadri knew it. Now if you’re wondering why the Sharks would send a 4th liner look Goodrow out there for the opening puck drop, it all goes back to this moment last year when Kadri and Thornton dropped the gloves off the first whistle.

Both guys were getting a little chippy with their twigs before the puck drop. I’m sure both guys ended up saying some not-too-pleasant things to one another as they were getting kicked out of the faceoff. Then they dropped the gloves like men and decided to chuck some knucks about it. I mean, there weren’t too many punches thrown in that fight as Jumbo rag dolled Kadri a bit. But Nazem left that tilt with a souvenir and grabbed a fist full of beard on his way down to the ice. 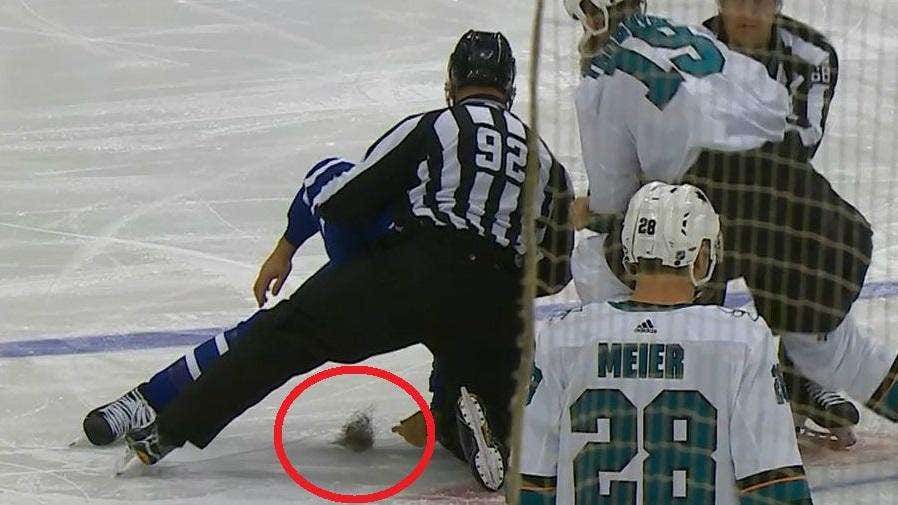 But here’s the thing–that was last season. And the two already fought right there on the spot. After that fight, the situation should have been over. But here we are. It was 315 since that Kadri/Thornton fight and the San Jose Sharks were still obsessed over Kadri. They still couldn’t get this guy out of their head. So they send some bum out there for the opening faceoff to try to fight him again. Why? Because he’s a shit stirrer and he’s the best at it. And part of being the best at what he does means not falling for any cheap tricks like the one the Sharks tried to pull last night. In what world does Nazem Kadri owe Barclay Goodrow a fight? The answer is no world. Maybe if Evander Kane or somebody of relevance stepped up to Kadri, he would have answered the bell. But a 5 minute swap between a 30-goal scorer and a guy who hasn’t scored 30 since playing in the OHL? Doesn’t seem worth Kadri’s time.

And to top it off, here’s Tavares scoring right as the Goodrow penalty expired.

All because Nazem Kadri was living in the brains of the San Jose Sharks for 315 days and caused them to take an extremely ill-advised penalty to open up the game against one of the most lethal powerplays in the league. And then to close out his night, Kadri got Melker Karlsson off the ice for 4 minutes with the Sharks down 2 and 5 minutes left in the game.

Not sure why Melker Karlsson is so concerned with trying to punch Kadri in the back of the head when he should be worried about getting on the scoresheet again. But that’s just what happens when teams play against Nazem Kadri. They lose their minds. The only thought consumes them is trying to take that guy out of the game instead of just winning. And that’s what makes Kadri so effective.