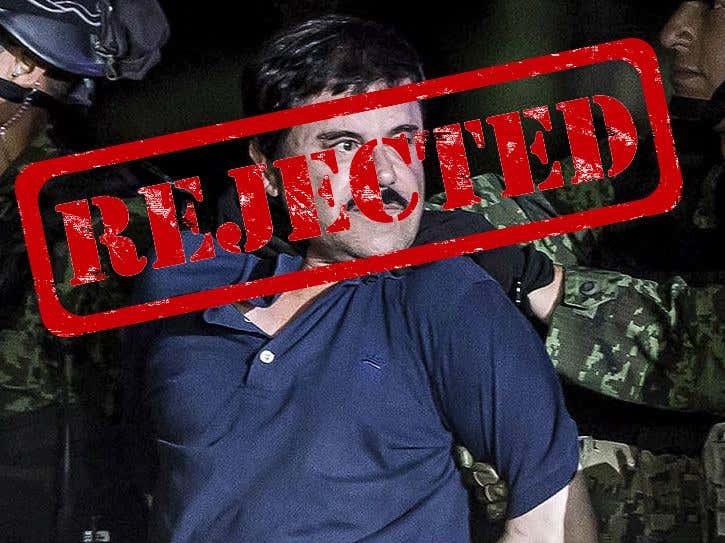 NBC- The U.S. district judge presiding over the case of a notorious drug lord has denied his request to hug his wife before the start of his trial, citing concerns over a potential prison escape and security.

According to a letter Defense Attorney Mariel Colon Miro sent the judge presiding over the case Tuesday, the alleged Mexican drug lord, Joaquin “El Chapo” Guzman, just wants to “embrace” his wife before his trial begins. In the letter addressed to U.S. District Judge Brian M. Cogan, Miro writes “to request that Mr. Guzman be allowed to give his wife, Emma Coronel Aispuro, a brief momentary greeting to include perhaps an embrace on Tuesday, November 13th right before the beginning of the opening statements. It can be a brief embrace in open court with the courtroom railing between them.”

In Cogan’s reply letter, dated Thursday, the judge writes in part: “The Court is sympathetic to the request. As defense counsel points out, defendant’s conduct during what are surely difficult proceedings and conditions of confinement for him has been exemplary, and he has displayed considerable grace under pressure. Nevertheless, having conferred extensively with the U.S. Marshals Service about defendant’s request, the Court is constrained to deny it. The Marshals have stressed that acceding to the request would be contrary to all the security procedures that have been put in place.” The letter additionally states that the [Special Administrative Measures] involved in the case “are tailored to the Government’s legitimate objectives of preventing defendant from coordinating any escape from prison or directing any attack on individuals who might be cooperating with the Government.”

And just like that, #Hugwatch is over and #HugGate is born. No appeals, no compromise of a kiss on the cheek, no nothing. Instead, the justice system dealt love a capital L because I guess El Chapo’s wife could smuggle in something that could help Chapo, excuse me El Chapo, escape or shank a guard/witness? Pish posh. El Chapo hasn’t an escaped a prison or personally murdered anybody in YEARS*. He was just looking for a little bit of TLC before the trial for his life kicks off. Where did human decency go in this country? If I am El Chapo’s lawyer, I am fighting for an overruling like my life depended on it, probably because it likely does. But until that appeal is filed, I suggest El Chapo’s El Lawyer organize a sit-in at NFL headquarters since that’s the only way I know to fight against such an egregious injustice.

*That we know of