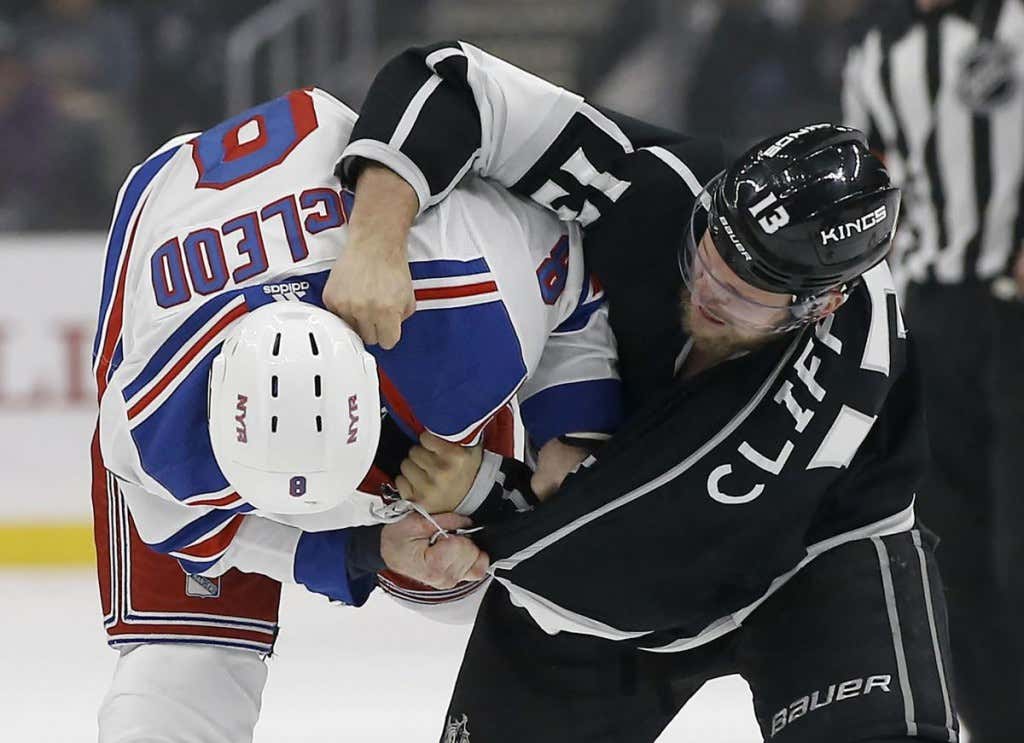 After the Rangers second straight shootout victory bailed them out of a second straight last-minute choke job, a lot of the fan chatter wasn’t about the win streak or squandering another lead late. Instead it was more Blueshirts supporters ripping into Cody McLeod playing yet again over Pavel Buchnevich & yet again next to Filip Chytil. There’s no question Buch & Chytil are projected to be big parts of the future on Broadway which forces fans to believe that, especially during a rebuild, the kids should play. Period. What’s the benefit of a 34 year-old goon impeding their growth at the NHL level?

Well here’s what those fans have to understand. The point isn’t that McLeod happens to be the one playing ahead of Buch & beside Chytil. Doesn’t matter who it is. Coach Quinn is trying to establish an identity here. He’s said it all along. He’s looking to build a squad all pulling the same rope in the same direction. He wants physicality, hustle & pucks on net. You won’t get an argument from me if you said Cody McLeod shouldn’t even be on the roster – but he is, and guess what? He’s doing exactly what Quinn is asking. He bangs, protects his teammates and believe it or not has the highest per-60 shot rate on the team at 5×5. 11 shots on goal in a mere 56 minutes. Compare that to the highly-skilled Buchnevich who’s mustered only 8 in more than double the ice time while blatantly avoiding the dirty areas & you can start to see what Quinn is trying to get the young Russian to understand.

Make no mistake, this is NOT pro-McLeod. I’m not a fan in the least – but you have to be objective. Understand the big picture. Our rookie head coach has stuck to his guns. It’s not about results right now but rather making sure that, regardless of skill level, everyone is all-in to play the style he demands. In Buch’s case, he’s clearly not. You think Quinn WANTS to have one of his most skilled scorers watching from the press box? Of course he doesn’t. But this isn’t on Quinn alone. Buchnevich has to force his hand. Obviously that doesn’t mean he has to goon it up a la McLeod but he’s gotta ramp up his motor. Can’t shy away from the corners with stick check blow-bys. Maybe he’s gotta wear a puck or two. If Buch was lighting up the scoreboard then perhaps he gets a little leeway. Instead he’s on the ice for the lowest rate of scoring chances. If you aren’t driving any offense you gotta bring something else to the table – and that’s what Quinn’s trying to get from #89. Play hard. Simple.

As far as saddling Chytil with McLeod, I understand the confusion. But if the Rangers were planning on burying their first-rounder all year then they would’ve just sent him down before his 10th game & prevented his ELC from kicking in. Are 4th line minutes next to Cody McLeod ideal? Of course not. It’s only been a couple of games though. There’s 6 other forwards Chytil’s spent more 5×5 time with than McLeod. He’s had plenty of opportunity & he’ll undoubtedly get plenty more. Would I prefer to see him instead of Spooner next to Hayes & Kreider? Hell yeah. Like I’ve said in the past I’d rather not pigeonhole the kid at center when it’s clear Zib, Hayes & Howden are the top 3. So slide him to a prominent wing – especially since Spooner has flat out sucked – and let Spoon center the 4th line instead. It was hardly 2 weeks ago when Quinn said he needed to get Chytil more ice time & proceeded to roll him for 20 minutes flanking Hayes & Zucc in a win over the Avalanche. Not sure why that plan was paused but let’s be patient here. It’s November 2. Chytil’s career is not being sabotaged.

I respect most of what David Quinn’s been trying to do so far. Acquiescing to the pressure of winning is the easy thing to do. “It’s a rebuild so let the kids run wild” is a real lazy way to approach this Rangers situation. Whatever his grand plan is, he’s been relatively consistent with how he’s enforcing it. Everything has to be earned. It started with Brett Howden surprisingly making the squad. How? Because not taking a single second for granted made it so Quinn had no choice, and Howdy’s been relentless ever since. Others who made the team, from vets like Shattenkirk down to Buchnevich & Chytil, have not been promised anything without the coach seeing them adapt to the style he’s trying to teach. Doesn’t matter how long you’ve played, how talented you are or how much is invested in you. Quinn isn’t going out of his way to look for reasons to exclude anyone from significant minutes. All he wants to see are skaters willing to do whatever it takes to give him every reason to rely on them. Get a roster full of guys like that & this turnaround will come a lot quicker.

Until then, leave Cody McLeod alone.