“I’m tripping major nutsack right now… Shout out to the team to get a one-two.”

F1 driver Daniel Ricciardo of Australia kind of reminds me of the Cali “ride the barrel – get pitted, sooo pitted” surfer guy… Extremely jazzed about optimal conditions/outcomes & kind of just losing their marbles when the mic meets the thoughts racing in their pumped up, extreme sports minds. Get pitted & trip some nutsack, brahs.

Can’t say I blame the driver for his excitement though; at the time of this interview yesterday he had just edged out fellow Red Bull teammate Max Verstappen by only 0.026 seconds to snag the top spot in a qualifying race at the Autodromo Hermanos Rodriguez. This gives him the best starting spot for the Mexican Grand Prix, the 19th round in this season. (It’s taking place later today.)

Ricciardo’s joy was in sharp contrast to his 2nd place teammate Verstappen, who won the race there last year. Winning would have put him in the record books as the youngest pole winner in Formula 1 history at age 21 & he literally lost that chance in a split second. His thoughts on it?

“The whole qualifying was crap.”

Going off Ricciardo’s honey badger helmet, he probably doesn’t give a shit. He don’t care. 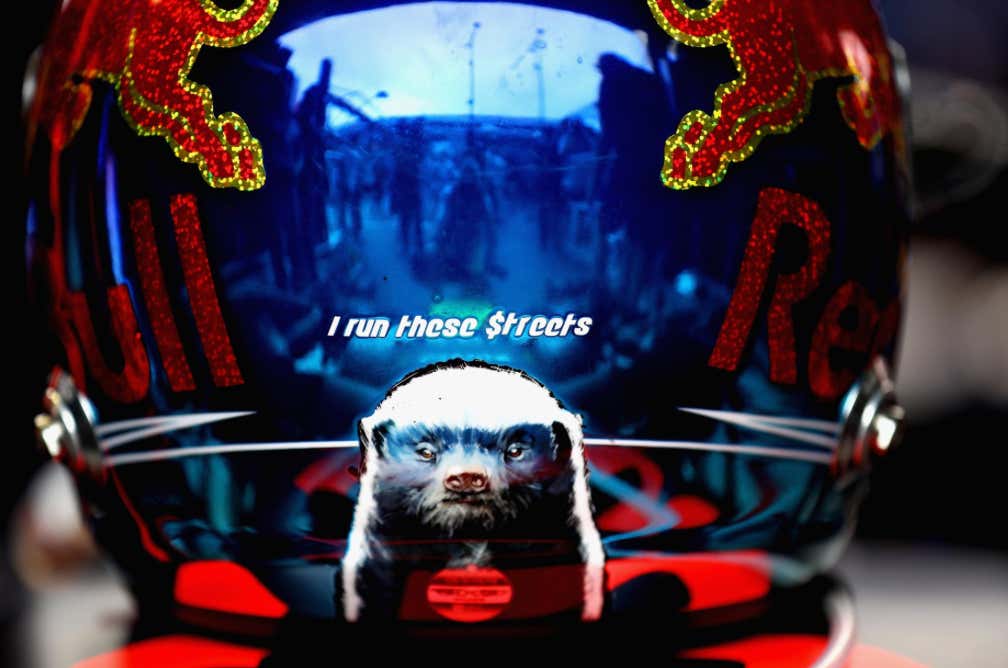 The odds for Ricciardo today are 11/1 but Sebastian Vettel is expected to win. Either way his enthusiasm for the sport is pretty contagious & I’m glad he won the qualifier so I can add “tripping nutsack” to my every day lexicon. And at least he’s dealing with the good kind of that. Others aren’t so lucky.