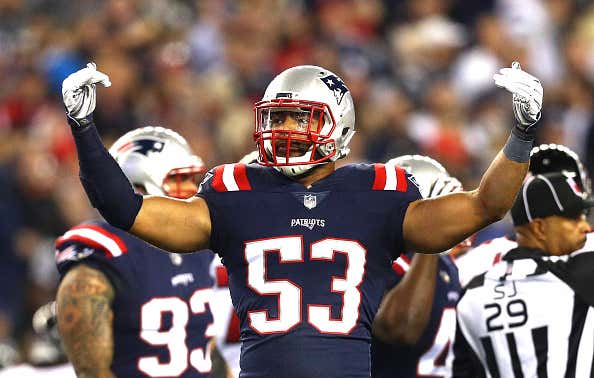 Source – With the NFL trade deadline fast approaching, the New England Patriots should hope to swindle a team similar to how they stole linebacker Kyle Van Noy from the Detroit Lions two years ago today.

The Patriots traded a sixth-round pick to the Lions for Van Noy and a seventh-rounder Oct. 25, 2016. Van Noy has gone on to become a Super Bowl champion, starter, versatile chess piece and playmaker in the Patriots’ defense. The trade was similarly meaningful to Van Noy and his career. He was celebrating the anniversary Thursday in the locker room.

“Saved it, probably, honestly,” Van Noy said Thursday. “It’s been a blessing. Yeah, kind of changed my whole life type of deal. It was a huge blessing.” …

“I feel like all the coaches — since I’ve played numerous positions here — I feel like all of them, you name it, from Coach Flo (Brian Flores) to BD (Brendan Daly) to when Matty P (Matt Patricia) was here, they’ve all seemed to bring the best out of anybody that’s in the room. It’s kind of the expectation here. And just trying to do the best that I can to provide for the team.”

I haven’t written a whole hell of a lot about Kyle Van Noy since the time a month or so ago Felger and Mazz ripped him because he “sucks,” every time he opens his mouth he’s “an ass,” he’s “a tool,” and he “sucked even worse, it’s Two Degrees of SUCK.” I was puzzled then about what their beef was. It seemed weird to me anyone would burn so many calories blasting a serviceable, every down linebacker on a defense that’s been to back-to-back Super Bowls. Or to have so much hatred for a guy who’s never said one controversial thing like he’s the Alex Jones of pro football.

Well I’m even more confused now as we are halfway through the season and he’s playing better than he ever has. Consider these numbers from Pro Football Focus:

Not to mention, this little datum:

Not a bad return on investment given the fact that in order to free Van Noy from the North Korean Re-Education Camp that is the Detroit Lions, Pats gave up the 215th pick and got back the 239th. They moved back 24 measly draft spots on the last day of the draft to land a 3-down starting linebacker.

In his 30 games with the Lions, Van Noy had a total of 36 tackles with 1 sack. In his 27 regular season games in New England, he’s produced 135 tackles and 6.5 sacks. These are pants-dropping numbers. Van Noy is yet another of the classic Belichick refurbish jobs. A guy he finds in someone’s driveway with a “$500 or B.O.” sign on him, talks the owner down in price, tows him to his own driveway and fixes him up into a cherry, mint condition classic he can take to the collector’s shows.

His emergence with the Patriots is not unlike another Patriots reclamation project, and I do not say this lightly. Mike Vrabel had zero career starts in four years in Pittsburgh under Dick LeBeau. Belichick personally called him in the first minute of the 2001 free agency period and cited him chapter and verse of all these plays Vrabel had been involved in and convinced him to sign with the Patriots. Eight seasons, 110 starts and three rings later, it seemed like they’d found the right guy for their system. And while Van Noy needs too more rings to catch Vrabel, the situations are remarkably similar.

And I’d be derelict in my duty if I didn’t remind you KVN is also winning at life. Kyle Van Noooyce.