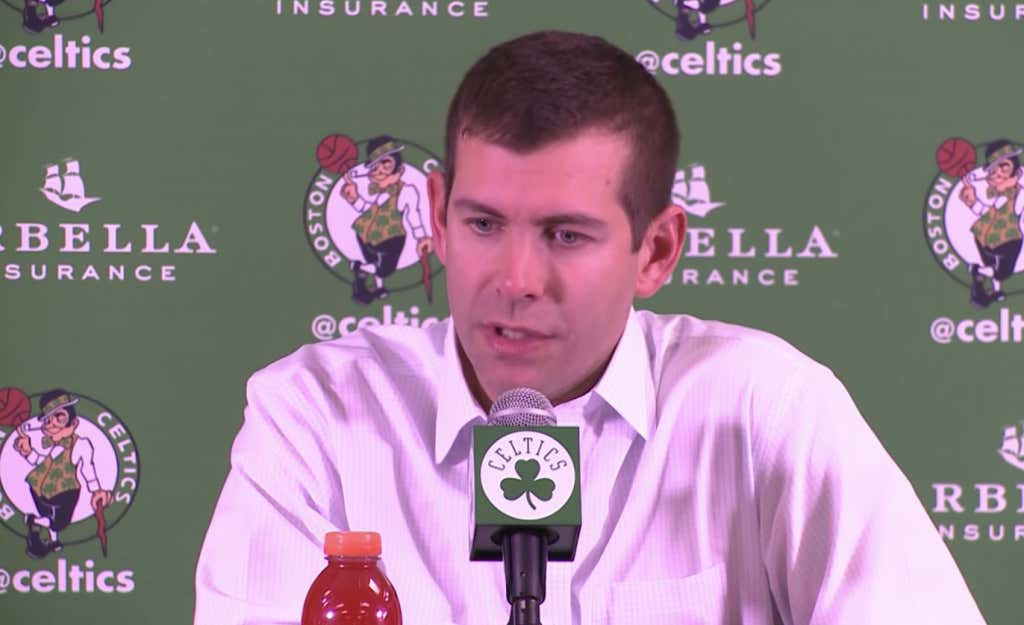 I know we’re supposed to turn the page and focus on the upcoming game with OKC, but that isn’t until tomorrow so I needed something to keep myself busy. I kept thinking back to the loss against the Magic, and I couldn’t get something out of my head. Immediately after the game, we heard Brad say it was one of the best offensive performances of the season, something he again stressed in his postgame presser

It wasn’t just confusing me to, it even had Al Horford perplexed

If there’s one thing I know about Brad, it’s that he’d rather die than even think about uttering a lie, so something had to be up. He’s above mindless spin in order to keep his team’s spirits up, that’s what I’m here for. Let me lie to the people and say everything is fine when in reality it looks like dogshit. It’s the least I could do. I am not ashamed to admit this kept me up at night so I decided to do something about it, step into my Celtics footy pajamas and take a serious look at what the hell Brad was talking about because my eyeballs told me their offensive performance the other night was horrific. Remeber,with Brad, it’s more about the process than the result. He doesn’t care if you miss shots as long as you are taking the right shot. Here’s what the numbers showed me and why I think Brad isn’t that concerned

The Celtics lead the NBA in wide open shots

So far this season, they are 51-103 (49.5%) on wide open looks, where a defender is 6+ feet away. The next closest team is PHI with 91 FGA. That FG% ranks 5th in the league. So you could say, as brutal as the loss against the Magic was, so far this season when the Celtics have been wide open, they’ve converted. Well, against the Magic, the Celtics went a brutal 9-24 on these type of wide open shots, including 6-19 from deep. A classic situation where one game is a bit of an outlier with how they’ve shot when wide open this season. You look at the biggest offenders, and you had Al Horford at 2-8 and Jayson Tatum 1-5. How different is this from their norm?

This is where I get that Brad is saying it wasn’t as horrific a night as the box score indicates. Given the larger sample size we got last season, we know that both of those shooters are very reliable options in that situation. This was a case of them simply having an off night, one that probably doesn’t happen too many more times this season.

The passing was there

Through four games, the Celtics have averaged 287.3 passes a night. We all know the Basketball Gods tend to reward good ball movement, and usually when this offense struggles it’s because they decide to be assholes and not pass the ball, instead opting for a more isolation heavy approach. But against Orlando, they moved the ball well, totaling 297 passes which would have put them very close to where they were last year (304). Again, sometimes you are going to miss shots, but the plays and the approach was there. This play in particular stood out to me even though Jaylen missed the three

That’s a beautiful play. There’s motion, everyone is touching the ball, there’s good spacing, Jaylen just missed. There’s no reason for Brad to be mad there because they played the right way and got someone a clean look. At the end of the day, that’s what Brad’s offense tries to do. Get good shooters open looks and live with the results.

The problem is mostly struggling to make contested shots

If you look where the Celtics rank in the league so far on open catch and shoots, it’s 14th in the league. Not awesome, but not a complete disaster. The disaster comes when you look at how they are converting on contested catch and shoot attempts, which is 24th. When a defender is between 2-4ft aka “tight coverage” the Celtics are shooting just 39.8% from the field and 30.8% from deep. Last year, while still near the bottom of the league, those numbers were 52.5/35.3%, so as you can see a considerable difference.

The good news is, despite struggling with contested shots, the Celtics are only taking a league few 23.3 per game. So basically, this hasn’t been an offense that is having a tough time getting good looks, and as a result take nothing but contested shots. In fact it’s the opposite and why Brad is probably so confident. This team is getting good looks, they just haven’t been falling, which again stresses process over result. The idea is guys will shoot their averages and this offense will look better to the common fan who just cares about whether or not they make or miss a shot, not how they got the shot.

Look at it like this, against Orlando the Celtics had 48 FGA considered either open or wide open according to NBA.com. This was a game in which they took 91 FGA, so in other words 52.7% of their looks were good, open shots.

So you can see, while the overall numbers don’t look great in terms of their league worst points per game or Ortg, if you look closer you can see this team is still getting their fair share of good looks. That’s probably why Brad isn’t freaking out all that much. There are certainly things this team needs to do better, who could deny that, but if the biggest problem is good shooters not knocking down wide open shots, I think that’s a good problem to have.

Remember who this team is

I tried to tell everyone who would listen this before the season started. Just because this team was adding Hayward and a healthy Kyrie does not mean suddenly they are going to be a top 5 offense. It’s just not who they are. Remember, this was the 18th ranked offense in the NBA last year with an Ortg of 106.7. Basically SA/NYK levels. They played with the 23rd fastest pace in the league, and had very similar off shooting nights like we’ve seen so far.

This season, they again are playing at the 23rd fastest pace in the league. The only difference is they haven’t made their open shots which has hurt their Ortg, as it stands at just 99.3 right now which is 29th in the league. Their AST% this year is at 60.5% (12th), which is basically identical to where it was last year at 58.6% (13th). In reality, they are not all that much different through the first four games of this season, and my guess is they are probably going to stay around that 12-15 range in terms of overall offense. The difference, in theory, is now they have more talent and more depth to make up for these cold shooting nights. The other night in Orlando that simply didn’t happen, and that’s how the cookie crumbles sometimes.

So after looking into it, maybe Brad wasn’t lying to us no matter how crazy it sounded in the moment. I think we’re all frustrated with how they’ve started the season shooting the ball, but nothing we have seen so far is a big time red flag. Guys are just missing open looks, which is that’s the biggest problem this team has offensively, something tells me they’re going to be just fine.

Now THAT is how you spinzone kids.