Myself, Joe Buck, and anyone that respects the sanctity of football:

That is a disgusting act by Odell Beckham and it’s unfortunate we have this on our blog. That is DISGUSTING by Odell Beckham Jr. I may not even watch the Monday Night Football game tonight after seeing that. It’s one thing to hit a net during a game. But to fake moon someone? That’s where I draw the line. A man’s imaginary buttocks has no place on TV! You think Jerry Rice would be fake mooning John Madden before a Monday Night game? Of course not! He’d be running up The Hill, uphill both ways, instead of pulling shenanigans like this. That Odell Beckham Jr. has no right looking to have fun on a football field. I hope someone on the Falcons is ready to protect the shield tonight and take a 15 yard penalty for this malfeasance. And if Goodell doesn’t drop at least an 8 game suspension on Odell, the league is truly lost.

Lets see what John Mara thinks of all this.

Randy sure seemed to appreciate it though. Maybe a little too much. 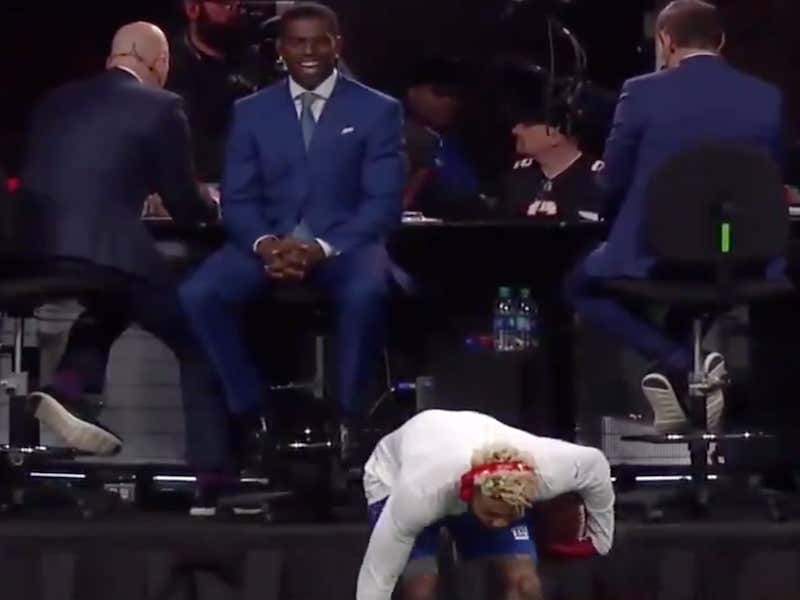 Okay we are going to end the blog there!

Now lets appreciate the originator none greater of this celebration, The Freak himself.

The thought of the chaos this play caused only 13 years ago is crazy considering Isaiah Crowell fake wiped his ass with a football like it was toilet paper before throwing it into the crowd and got an endorsement deal out of it. Randy Moss truly was ahead of his time and I thank God the Twitter outrage brigade wasn’t around to cry about the awesome stuff he did back in the day.