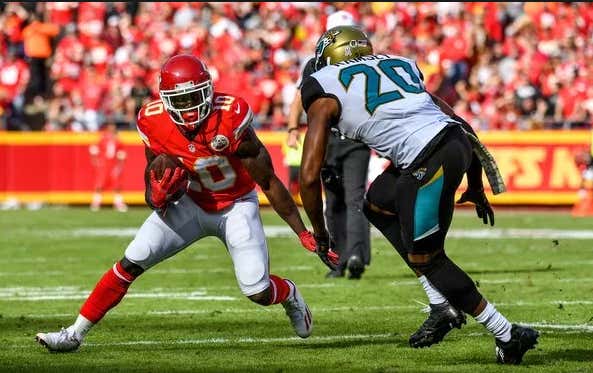 As far as regular season matchups go, it doesn’t get much better than this. Kansas City is playing just about as well as you can on offense and the Jaguars lead the league in nearly every single defensive statistic. Patrick Mahomes is exactly who the Chiefs hoped he was when they traded up for him and Tyreek Hill is a nightmare in open space. Just look at Mahome’s stat line.

Jaguars head coach Doug Marrone has said that Patrick Mahomes is playing the QB position as well as it’s ever been played.

All this week, Hill and Jaguars superstar Jalen Ramsey have been going at in the media. Very exciting!

Now, I don’t think that Hill will actually go head-to-head with Ramsey that often. Hill has been in the slot on 38 percent of the snaps that he’s played this year which just isn’t fair. With Travis Kelce as tight end, defenses cant roll their free safety to Hill’s side unless you are willing to have Kelce manned by a linebacker. Most teams dont have that luxury. Kelce is dominate when linebackers cover him. He’s much too fast for most linebackers in the league. Myles Jack isnt most linebackers, though. Usually, when the Jaguars play an elite tight end, they ask Tashuan Gibson to carry the water (little football term). Gibson covers tight ends exceptionally well; Gronk only had two catches against the Jaguars in week 2 (maybe 3 but I’m not gonna look it up).

Jaguars starting nickel DJ Hayden is out this week, and he will be replaced by Tyler Patmon. Patmon will be asked to match up on Hill and that’s a large ask if you cant use one of your safeties as a blanket because he’s covering Kelce.

So, I think we will see a lot of loose cover 3 with the corners playing off and letting plays happen in front of the sticks. The Jaguars will try to make Patrick Mahomes drive the ball on 10 play type drives and see if the second-year QB can do that over and over again.

I’d be surprised if Hill doesn’t get loose for a long gainer at some point because he does against everyone, but Telvin Smith, Myles Jack and the deepest defensive line in football will make it a long and tough day.

My prediction is a 28-24 Jaguars win. I think the Jaguars will do what they do best on offense and control the ball, eat the clock, and wear down the Chiefs already weak defense. It will make it difficult for Mahomes to get in any type of groove. Either that or the Chiefs blow the Jaguars doors off. Either way, it will be a great game.

Also, for the love of god, don’t kick it to Hill. He’s fast.