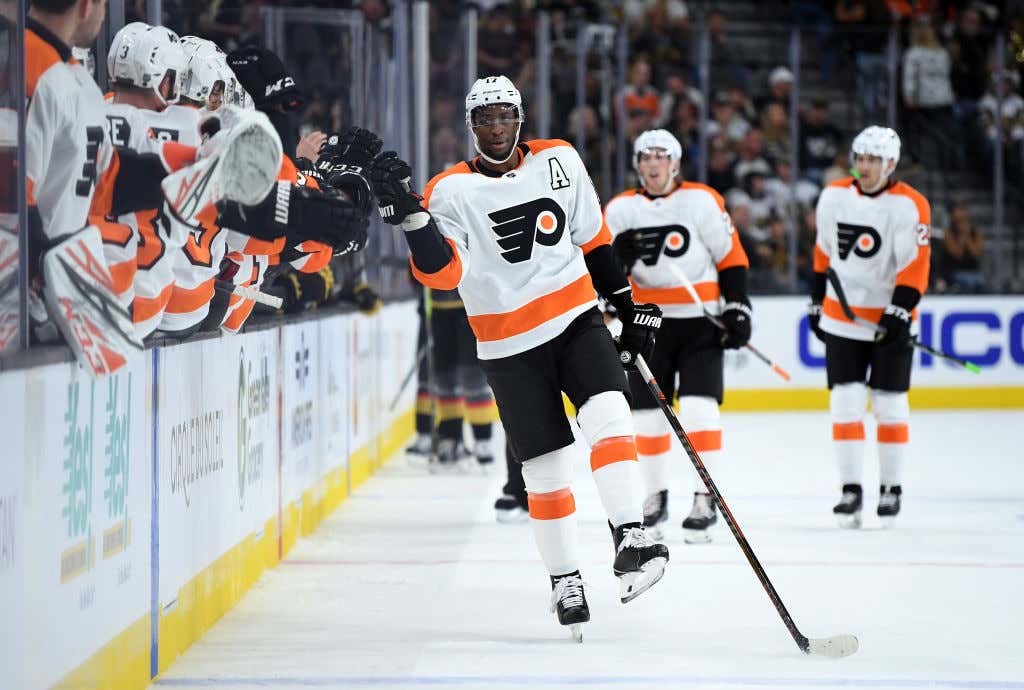 Alright so has everybody got their 3rd or 4th cups of coffee yet this morning? Are we ready to go? Definitely a late night to start the season but when the boys are buzzing like they were in that 2nd period last night, sleep don’t mean shit. Here’s all of Philadelphia waking up this morning knowing the Flyers chased Fleury halfway through the season opener and are now 2-0 (in regulation) in Vegas.

Now was last night’s game pretty? Shit no. I mean don’t get me wrong, there were definitely some moments when the boys were buzzin. But overall it was pretty far from a clean win. The Flyers still made plenty of mistakes, seemed to be totally reckless with the puck in their own zone, and the ice was tilted completely vertical in those first 10 minutes for Vegas. I know that was to be expected considering it was a home opener for them coming back after being Western Conference champs. Obviously Vegas was going to come out gassed up and flying around. But if it weren’t for Brian Elliott, that game could have gotten pretty out of hand pretty early. But here’s the thing–it was game 1 of 82. The Flyers have plenty of time to clean some stuff up and being able to weather that storm in the first 10 minutes by only giving up 1 goal gives me a lot of faith in their ability to “bend, not break”. I don’t think every game is going to consist of about forty dozen turnovers right inside their own blueline for the rest of the season–or at least I hope. So as soon as they clean up some easy fixes there in their own zone? Fuck, man. The Flyers are going to be a tough team to play against because they come in waves.

Obviously the Flyers’ core of Giroux, Voracek and Simmonds aren’t getting any younger. But the roster on a whole is definitely trending young and this goal right here is a primetime example of how much impact the kids are going to have on the season. They play fast, they play loose, and they can ball the fuck out. Now I mentioned this previously but Oskar Lindblom changing his number from 54 to 23 might be one of the biggest additions to this team. When you can ditch a crusty number like 54 and put on 23, you’re going to play with more confidence. And that finish right there? All the confidence in the world. You see him give a quick little fake back to his forehand there to freeze Fleury, then goes back to the backhand and it’s in the back of the net. Definitely gets some help from the defender but the confidence of Lindblom to be patient there instead of just rushing a shot on net is what causes the goal. But my favorite part of this sequence?

Watch this play develop. Watch Travis Sanheim jump up into the rush starting from his own goalline. He knows that the Flyers have numbers and he knows he has the speed to get up there. So as soon as Voracek gets the puck, he takes off. That’s just great awareness. And then not only does he join the rush but he also hits Lindblom in stride with that feed at the blueline to send him in on net. That’s a sick play from Travis Sanheim who also looks like he already has a lot more confidence in his game this year than he did last year. Especially this early in the season. So that right there is what youth brings to this lineup. The Flyers can play fast and they can start with the puck in their own zone and have the play end in the back of the net 5 seconds later.

First off, shoutout to Wayne Simmonds. He had a lot of people questioning him this offseason. A lot of people saying his body is starting to wear down on him and he’s not going to be able to produce like he once was. Then he comes out last night and pots home 2 goals in the season opener doing exactly what the Flyers need Wayne Simmonds to do–get his ass to the front of the net and put home the garbage. Were either of his goals last night as fancy as let’s say that Hertl goal from Wednesday? No. But they all count the same on the scoreboard. And when you have Claude Giroux and Jake Voracek out there picking apart a penalty kill like they’re able to do, all you need Simmonds to do is have his stick down on the ice and ready for a tap in. Big game for Simmer last night.

And a big game for the PP1 Unit. I know they had one powerplay where they weren’t able to get anything going and pretty much wasted the entire 2 minutes. But the Flyers had one of the best powerplays in the league last year and this year it looks like it’s only going to get better. It’s a sick fucking joke is what it is. Because we all know the amount of damage that the Giroux-Voracek-Ghost-Simmonds unit can do. They have penalty killers spinning the entire time they’re in the zone. Cross ice pass after cross ice pass after rocket from the point from Ghost. They get chances every time they get set up. But even if a penalty killing unit can sustain that barrage of the top unit without getting scored on, coming up next is Ivan Provorov, Nolan Patrick, James van Riemsdyk, Travis Konecny. It’s not like once you get the top unit off the ice the coast is clear. You’re going to get blasted in the ass for the entire 2 minutes or less depending on how long it takes them to score. Flyers powerplay. Certified wagon.

Now that Fleury is out of Pittsburgh, I have no other choice but to like the guy. I really do. But it’s still sweet every now and again to remind ourselves just how much the city of Philadelphia owns him. 3 goals in the 2nd period. Two of them coming just over a minute apart from each other. Hagg and Laughton being the ones to chase Fleury to the bench was definitely unexpected but boy do I love seeing those guys get on the board. It’s crazy that the Flyers put up 5 goals last night and Giroux, Voracek, Couturier and Gostisbehere didn’t have any of them. Secondary scoring has always been a huge issue for this team but not last night. It’s just always great to be able to break this one out. 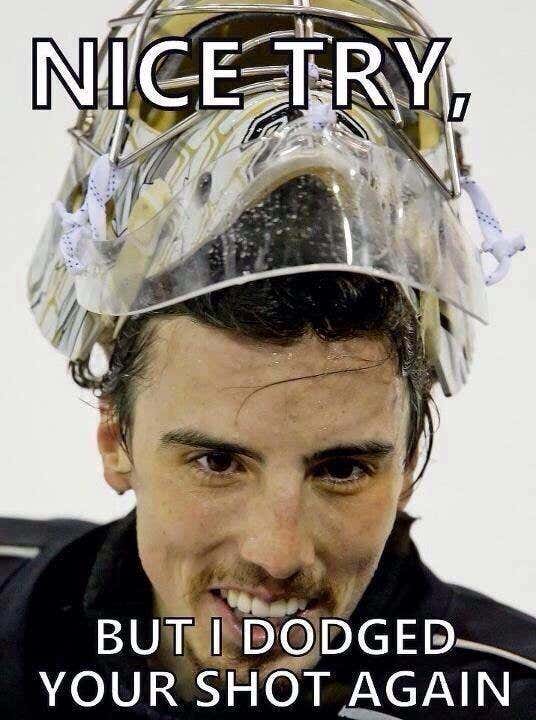 Now I’m not going to get too carried away here because history tells us that for every ridiculously great Brian Elliott game, a ridiculously terrible one is on the way. With that being said, last night was a huge moment for the Flyers goaltending situation if somehow Brian Elliott is able to play more games like that. Like I mentioned in the beginning, the first 10 minutes of that games was a goddamn shooting gallery for the Golden Knights and aside from Marchessault having a wide open lane to come down on after a bad Andrew MacDonald change and putting on a snipe show, Elliott handled everything he saw. And throughout the whole game there were so many moments where the Flyers had chances to clear the zone, turned it over around the blueline, continued to give Vegas more chances but Elliott was there to bail everybody out. He was seeing the puck. He was staying strong on rebounds. He got a little help from the post a few times but you need to be good to get lucky. Last night was a great game for Brian Elliott and that game could have come down to the wire if it weren’t for a few big time saves.

– Okay so by now everybody knows that I love Travis Konecny. I think I made that abundantly clear last year. But I think he was the most noticeable player in the game last night. He may not have found himself on the scoresheet but just watch this shift for me real quick. And focus on TK.

Travis Konecny is listed at 5’10”. That might be a little generous. But he’s a little fucking pitbull out there. He wins the battle for the loose puck in the corner here. Then his speed/quickness allows him to win the race to the loose puck at the top of the zone. Then by at least attempting to get a shot on net that gets deflected, he ends up getting Claude Giroux a good look here that he ends up whiffing on. But that period could have essentially been over once the puck got to the corner there. Instead, Konecny keeps the possession going for another 10 seconds and gives the Flyers a chance to do something. And that was all game. Make sure you watch out for that the rest of the season. Keep track of it. Every time you see a loose puck and Travis Konecny is within 10 feet of it, I guarantee you he ends up with the puck on his stick at least 80% of the time.

– Andrew MacDonald is apparently ready for the Carter Hart era to start sooner rather than later.

In all seriousness, I thought AMac played a great game last night. Definitely a bit of a bonehead play here but I really like that 8-47 pair. I think that Hagg does a good job at balancing out any defensive mistakes that MacDonald may make and then MacDonald just provides some stability on the rest of the ice for Hagg. MacDonald has been getting shit on in Philadelphia for years now but I think this will be the year that everybody starts to come around on him. He’s clearly not the best defenseman on the roster but he brings a lot to the table that doesn’t end up on the scoresheet.

– “Knock Knock” is back and I’ve never been more sold on a Philadelphia Flyers team. Gonna be a helluva year, boys and girls. Buckle up. Feels great to be back.

P.S. – ICYMI: Here’s my review of “The Gritty” from Urban Saloon.