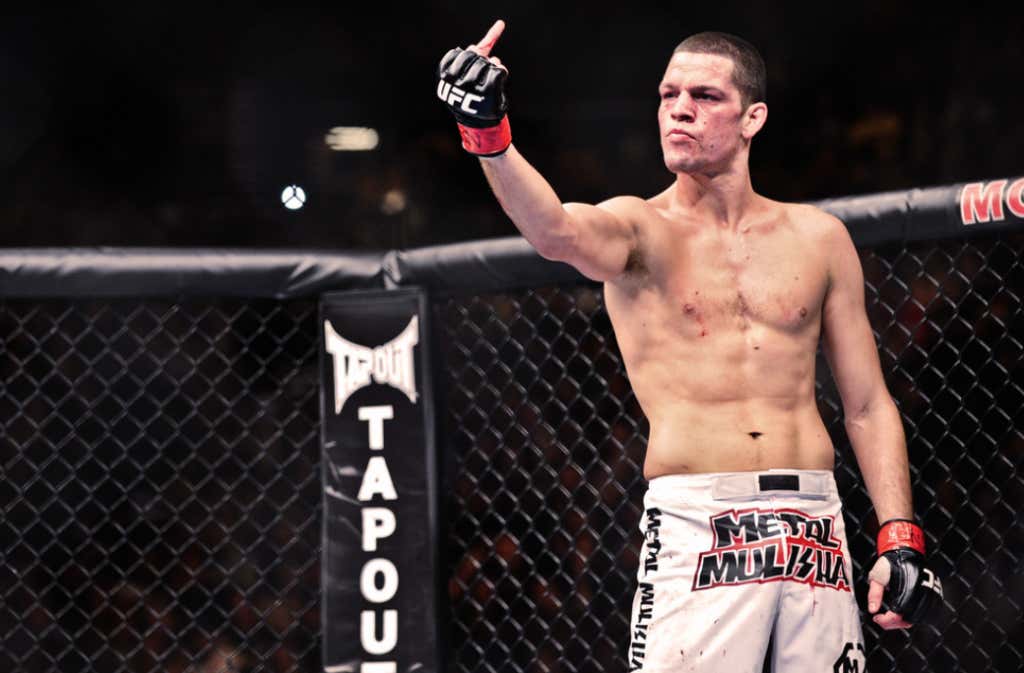 I mean honestly I don’t get it, I’m confused. Not entirely confused, because Diaz gonna Diaz, but if we’ve got our timelines straight here…

Nate Diaz goes pretty much radio silent since then, but we know through insiders and people close to his camp that he’s only returning to close out the trilogy with McGregor, or for another MASSIVE fight. Tyron Woodley and Georges St-Pierre were two names that lingered around as potential opponents for him in this time.

On Thursday night (August 2nd), the Los Angeles Times reported that Nate Diaz had signed his bout agreement to fight Dustin Poirier at Madison Square Garden on November 3rd, and that he would be appearing at the UFC’s 25th Anniversary Press Conference the next day to promote said fight.

Nate Diaz shows up to the press conference late, faces off when Dustin Poirier when he arrives, and storms out of the building the second Dana White threw to a promotional video for Khabib Nurmagomedov vs Conor McGregor at UFC 229 on October 6th. He fired off that tweet moments later.

Poirier, his scheduled opponent for that UFC 230, had some fun with Diaz’s antics and fired off a similar tweet of his own afterwards…

From what I’m gathering here, and this could either be completely off-base or dead-on, but I think Nate Diaz is probably upset that he’s not on the undercard of the Khabib Nurmagomedov/Conor McGregor. If he’s on that card (UFC 229), it becomes an instant megacard and Diaz probably gets some pay-per-view points so he’d make more, all that jazz. Maybe he signed his bout agreement before he realized Khabib/McGregor was finalized? Which was REPORTEDLY finalized forty-five to thirty minutes before the presser itself, so if Diaz said “Can you put me on the McGregor card?” and the UFC told him there wasn’t even an official date for that yet so he midas whale just sign now, they wouldn’t be LYING but it could be scummy. Maybe that happened. I don’t know, this is all just pure speculation at this point. I would like to see that Diaz/Poirier fight at MSG, though, so I hope this gets sorted out soon.