From the Halls of Montezuma, to the grass of Minute Maid Park…

This past Friday Marine Corps veteran Chris White waited until the final strike of the Astros/Rangers game was called. Then he dropped trou & flew his flag silkies shorts & star spangled shoes across the field in front of 40K+ fans.

White is the founder of an organization created to “use humor as a platform to display patriotism.”

He said he ran onto the field Friday to bring awareness to the deadly serious issue of veteran suicide.

“If I can make you laugh for at least five minutes then you’re not thinking about that dark space you could potentially be in,” he said. “If I can gear it toward patriotism, to me, I consider that the holy grail.”

Browsing around out of awe & curiosity I noticed the “organization created to ‘use humor as a platform to display patriotism'” is his company, aptly named ‘Freedom Hard’. If you’re a vet you’ll know what I mean when I say it is IN-YOUR-FACE-UNAPOLOGETIC-AMERICAN, a trend seen in a plethora of vet-run t-shirt companies. From my own jaded, skeptical perspective I think that can actually alienate vets & civilians sometimes, but that’s another ball ‘o wax. To each their own.

The site says $1 from each bag of their coffee sold goes towards vet charities & it looks like they raise awareness for various organizations. When a GoFundMe started for his bail he also donated that to charity, sending proof to a local news station. And as quick-to-cringe & jaded as I am, the streakin’ did make me laugh & I know it made others do the same, & I couldn’t help but feel pride when I heard he was a Marine.

In other news, this isn’t the first time someone in patriotic shorts made it onto the Astro’s field. Last October during game 5 of the World Series, a Russian YouTube star hopped the fence & ran wild as onlookers chanted “USA”. 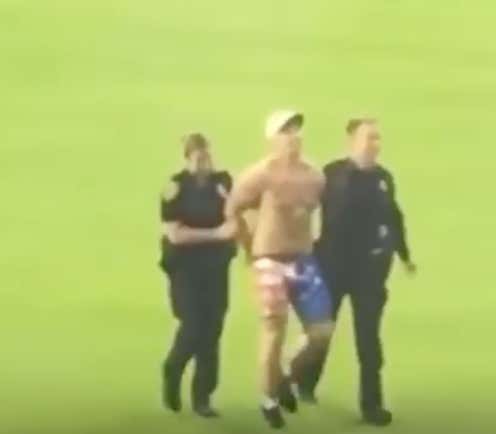 Sure, he wasn’t American & didn’t have a cause other than publicity… but maybe it was good luck?