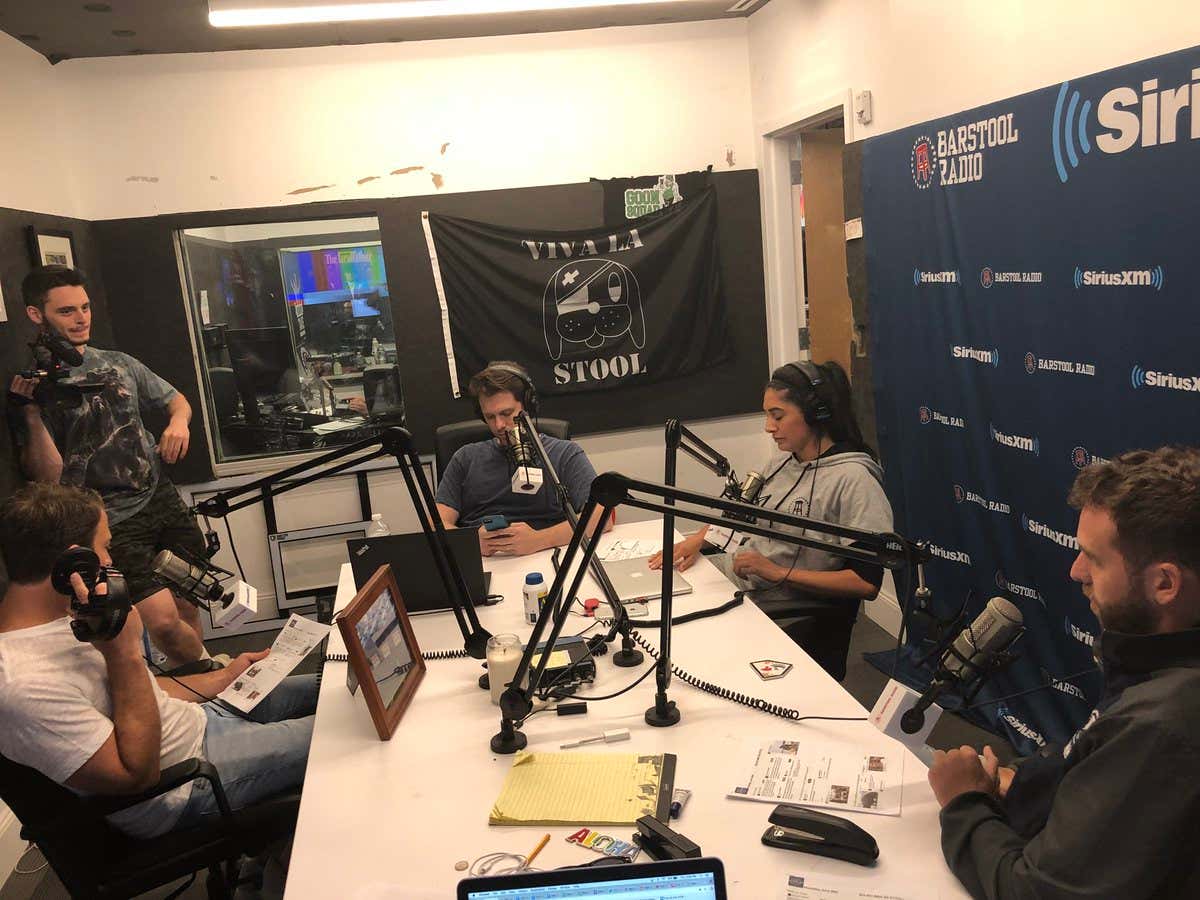 Welcome back to the Barstool HQ Week in Review. We took off last week because it was a slow week, and also I was traveling to and from Pittsburgh for Pat McAfee’s baseball game. No excuses, but that’s the excuse. This was a rather eventful week. The summer heat is getting to everyone. People are at each other’s throats all day long. We had our fair share of controversies this week, to put it mildly.

Personally, I love watching it all unfold. Just pull up a folding chair and some popcorn. I myself try to avoid confrontation at all costs, but besides maybe Gaz, I think I love watching it unfold more than anyone. When I was younger, I used to try to start arguments amongst my friends just so I could watch. It is entertaining and then both friends would like me more since they’re arguing with someone else. One time, I had two of my friends fighting against each other and they both wanted me on their side. One was handing me lemonheads, while the other was giving me Mentos. It was like a contest for who could give me more candy. It was incredible.

Alright, now that my sociopathic tendencies are out of the way, let’s move on to reviewing the week.

The week got off to an inauspicious start for me when I was a few minutes late with Dave’s morning coffee. Again I hate to make excuses, but my train got held up for like 10 minutes because the LIRR is incompetent, so there was nothing I could do. So what did I do the rest of the week? I got up 30 minutes earlier every day and took the earlier train just to be safe. That’s Team Portnoy grind that you simply can’t teach.

The big storyline at HQ was Frankie freaking out about John Tavares potentially leaving the Islanders. In response to Bagel Boss claiming they’d deliver free bagels to Tavares every day, Frankie said Borelli’s would NOT be counter-offering with free chicken parms.

Later in the day, Frankie got the news that John Tavares is gluten free, and thus can’t eat bagels or chicken parm. He became the most excited human that has ever existed.

Later, we are thankful for the eye-in-the-sky to capture an all time Office Manager Brett moment.

And that’s OMB in a nutshell.

Bagel Boss got wind of Frankie’s chicken parm argument and came back with a STRONG response.

Frankie said he respected the move and is not anti-Bagel Boss, so he had no problem eating a bagel from them. I can’t blame him. They were delicious.

We had a couple of very cool guests in the office. In the morning, Murr from Impractical Jokers was in. I love Impractical Jokers. I laugh every time I watch it, and I don’t care if Big Cat says it makes me like Mike Greenberg for watching it. It’s funny. Third best show in TV history behind Survivor and Chuck.

Later, Johnny Damon swung by HQ. A lot of people were excited to meet Damon because of his accomplished baseball career. Not Dylan Stone.

I’m not sure where the conversation went from there, but at one point I overheard Tex saying to Johnny, “For me, it’s like…if you fuck me over, I’ll fuck you and your whole family over.” And that’s why Tex is Tex, and there’s nobody else like him in the world.

Speaking of Tex, he was later accused by PFT of “lib-shaming” someone. They argued and mocked each other for a few minutes and then somehow ended up taking an IQ Test. I also somehow ended up being the proctor. Probably because I found the IQ Test for them to take. (I had recently bookmarked an IQ Test I was planning to take to prove that I am in fact “near genius” and have a 138 IQ).

I kind of messed up and arbitrarily decided the test was 15 minutes. That proved to be short. I then changed it to 20 minutes. And then 25. Neither finished, so it ended up with PFT having a 104 IQ and Tex having a 94 IQ. Here’s the video of the live reveal on Barstool Radio.

The office’s attention was focused on the Mexico-Sweden and Germany-South Korea games. Mexico was getting killed by Sweden, and Liz was convinced Barstool HQ was bad luck.

Ultimately, South Korea beat Germany so Mexico got in anyway. Everyone was happy for Mexico, and it got me in the mood for a burrito so I went and got Chipotle for lunch.

We also had two very special guests in the office. Jesse McCartney was in for Chicks in the Office. He was cool and all, but he’s no Cal from Timeflies, who was also in. As I’ve said before, Timeflies is my favorite musical group in the world. We had already met once, so this time it was just like catching up with an old pal.

So then we had Barstool Radio, and well, you know. It got awkward. Luckily, I was able to beat Deadspin and write our own hit piece against us from the perspective of Laura Wagner.

I hate to toot my own horn. I really do. But I wrote that hit piece in about 10 minutes, while on a Sirius radio show, with a full bladder. And it was way better than what they put out the next day. Barstool now legitimately does everything better than Deadspin, including writing anti-Barstool hit pieces.

The tension carried over into Thursday. The Rundown was painfully awkward with some tension between Dave and KFC, but it was also incredibly entertaining. Very reminiscent of an old-school Skype Rundown. I loved every second of it.

Then we had an argument between Dave and Liz about whether or not kids have to buy their own equipment for youth football.

That led to a very real, tense argument between Dave and Liz over who’s more of a real Texan.

Then onto Barstool Radio, where we got a showdown between Dave and Hank. More tension. More awkwardness. More great radio. Was happy to have a front row seat to it all.

At the end of the show, Frankie found out that Wes Clark is joining the Toronto, so that means Tavares may be too. It was the most crushed I have ever seen a human being. Even though I’m a Ranger fan, I think I have to root for Tavares to stay on the Isles for the sake of Team Portnoy.

Friday morning was emotional for me. For the first time in forever, I didn’t get Dave’s coffee. When they handed me one coffee instead of two, I almost broke down in tears. Just a reminder that I’ll be without my fearless leader for at least the next few weeks while he takes a well-deserved trip to Nantucket. I can honestly say without an ounce of sarcasm or exaggeration that I will miss him. August can’t come soon enough.

Friday means one thing…. new Jetski music. There was a palpable buzz around the office as we waited for his song to drop on SoundCloud at 11 AM. And let me just say, he delivered again.

As the kids say, I was really “in my bag.” You can listen here.

And that’s a wrap for an eventful week at Barstool HQ. Head into the weekend with the official Barstool Darty SZN playlist.