Willie McGinest on Tom Brady’s retirement plans: “I think there will be a walkoff. If he wins this year, a Super Bowl, I think it won’t be 45 years old. I think he will walk off and say, ‘The game has been amazing to me and now I am going to figure something else out.’”

Far be it for me to disagree with Willie McGinest. A man who knows Tom Brady in the way that only a key contributor to his first three champions possibly could. A man who appeared in 11 postseason games with Brady and won the first 10 of them. One of the great Patriots of all time who’s kept a tight relationship with TB12 throughout his retirement.

But I know Brady, too. In the way only a grown man who’s written a million and a half obsessive fanboy blogs, once interviewed him over the phone where he wished me a Happy Birthday and who has offered up his wife to the QB under the Writ of Prima Noctae could. And I’m saying that if Tom Brady wins the Super Bowl this year, he will be back in 2019 for Ring No. 7. And you know how I know why? By Brady’s own words: 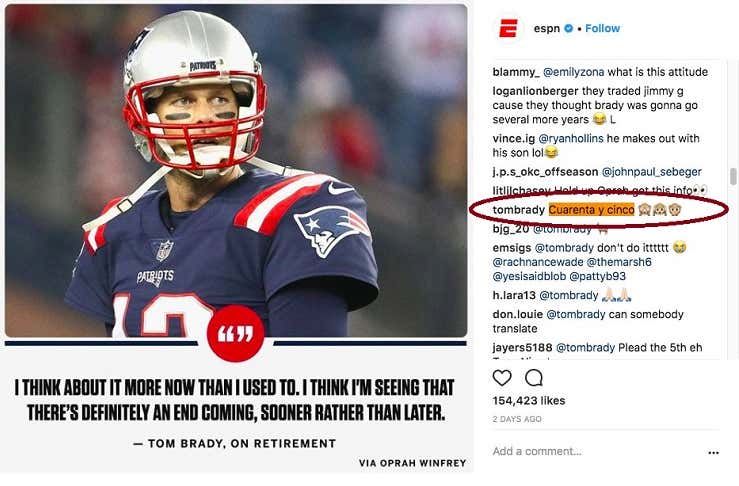 Sorry, Big Willie Style. But what could be more direct than that? Brady does an interview with Oprah. ESPN Instagrams a quote. So he comments in the middle of tens of thousands of the kinds of nobodies who comment on ESPN Instagrams the Spanish words for “45.” Followed by the “See No Evil/Hear No Evil/Speak No Evil” monkeys. That is as loud and clear as it gets. All the proof we need that he has every intention of playing until he’s cuarenta y cinco.

There’s no equivocating in that totally unambiguous message buried deep in that comment section. No caveats. Not a single “if.” No Spanish for “but I reserve the right to change my mind if we win Super Bowl LIII and go out on top.” Just a perfectly straightforward cuaranta y cinco that couldn’t mean any other thing than he’s got at least cuatro more ano left. And in a year where we’re left scrambling like Ready Player One avatars for Easter Eggs in every social media post everyone associated with the Patriots puts out there, this is as clear as any, I guess.

All seriousness aside, it turns out that the first game of 2008, when Brady got his ACL blown out by Bernard Pollard, was the exact midway point of his career as it currently stands. Meaning that starting with this season upcoming, he’ll have more games after the injury than before. And overall he’s played better after than he did before (his career best 2007 season notwithstanding).

And while it probably makes more sense to listen to how vague he was with Oprah than what his social media guy commented under an IG, I believe winning the Super Bowl won’t make him retire. Because he’s still playing at a high level. Because he wants to be the living, breathing informercial for TB12 Fitness. That winning only makes him hungrier for winning. And based what he’s said a million times before on this very subject: That is favorite ring is the next one.

P.S. Worrying if your quarterback will retire if he wins the next Super Bowl is a champagne problem. I’m just sorry for giving Boston.com the impression this isn’t fun.