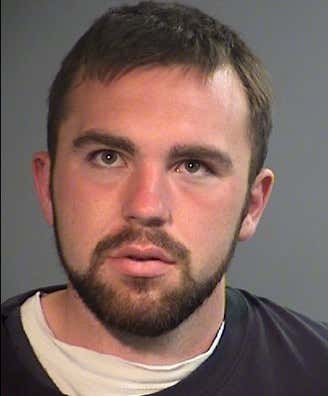 (Source)- A Grants Pass man told police he’d taken LSD and thought he was living a real-life version of video game “Grand Theft Auto” when he stole a car in front of patrol deputies and led them on an over 40-mile-long chase through Jackson County on Saturday, authorities say.

Two county deputies were awaiting a tow truck to haul away a 2003 Toyota Camry along Oregon 66 and Emigrant Lake Road after arresting the driver on an unrelated drunken driving case, when 23-year-old Anthony J. Clark got inside around 8:25 p.m., according to the sheriff’s office. He then drove off, evading one deputy’s efforts to stop him. While speeding through Ashland, Talent and Phoenix, Clark crashed through chain link fences off the roadway, ran over spike strips twice and drove the wrong way down several roads, the sheriff’s office said. After several attempts, a patrol car managed to bump the rear of the Toyota and cause Clark to spin out in Medford. Clark tried hitting a patrol car, then ran from the Toyota. He fled into a mobile home park and was arrested by police as he was trying to steal another car, the sheriff’s office said.

I’ll admit that I’ve never taken LSD, mostly because I am a big ol’ pussy that is scared of anything that isn’t booze or weed. So I don’t know what those effects are like outside of the shit I saw in Dr. Strange. But as someone that has played marathon sessions of Grand Theft Auto games, this excuse checks out. Back in college, whenever a new GTA game came out, my roommates and I would pretty much burn a hole through the game CD from playing it so much. When I closed my eyes and tried to go to sleep, I would see cars driving, police chasing me, and could hear sirens in my head. At that point, my name might as well have been Tommy Vercetti and I was slinging more ye than Scarface in his prime. Once I woke up and was able to tear myself away from the game, I would go outside and feel like I was living in the Grand Theft Auto world. Every car was a simple hijacking away. Every person was a potential ATM for me after I beat their ass. And if I wasn’t feeling good, a lady of the night would nurse me back to health once the car I stole was a-rocking. Again, I would never actually do any of that stuff because I am a big old pussy. But that’s what life became and the reason this Dave Chappelle sketch still holds up to this day.

That is why no jury that has at least one member that got fell down a GTA rabbithole would convict Andrew J. Clark for stealing that car. Everything from stealing a shitty old Camry to driving through a fence to trying to escape police by driving over spikes and then looking to steal another car is straight out of the Grand Theft Auto Hint Book. So not only does Clark look like a bootleg Andrew Luck that was born to play at least a supporting role in GTA VI, but he acts like one too.

And if I’m the soldier that got caught joyriding a fucking tank around Richmond last night, I’d be pissed as hell about this story. Because saying you thought you were living in a Grand Theft Auto game is the only excuse that could possibly help that soldier avoid getting court-martialed for doing this.