For this first installment of “Julie Stewart-Rinks” we hit the ice with celebs and former NHL stars for Luc Robitaille and his wife Stacia’s charity “Echoes of Hope,” which serves to improve the lives of at risk foster youth. Luc & Stacia are arguably two of the nicest and most generous people, and they created this amazing charity hockey game at Toyota Sports Center in Los Angeles, California (the LA Kings practice facility) to raise money for a great cause, while also giving all of us dusters the liberty to muck it up and feel like pros. 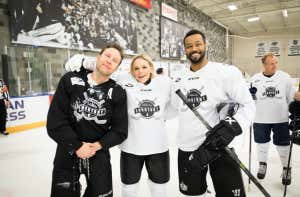 Some of the beauties on the ice included, former NHLers: Derek Armstrong, Luc Robitaille, Ray Whitney, Dany Heatley, Sheldon Souray, Sean O’Donnell, Pierre Turgeron, Kyle Clader, Mike Donnelly, Brandon Convery, Bill Ranford, Jarret Stoll etc., and famous celebs like David Boreanaz (Bones, SEAL Team), Jay Harrington (S.W.A.T), Isaiah Mustafa (Shadow Hunters, “Old Spice Guy”), Michael Vartan (Alias, The Arrangement), Michael Rosenbaum (comedian, Smallville), Jenny Taft (FS1 Host), the band “R5″, Billy Flynn (Days of Our Lives, Dead on Arrival), and me, a nobody, Barstool Sports.  I was pretty generous with my chirps (need to work on the breadth of my insults), and trust me, the other guys were giving it back (they just weren’t mic’d up), but it’s all in the spirit of hockey. And hey, if you can’t score, gotta make an impact somehow.

As they say in hockey, let’s do that hockey.

Riggs Tells Us How Foreplay Was Created

The Definitive Guide to Venmo Etiquette

Which Barstool Employee Will Be Getting Fired Today?

The Lakers Are The Hottest Team in the NBA - The Pat Bev Podcast with Rone: Ep. 8

Kate Upton Should Be Afraid of Frank the Tank | Barstool Rundown - December 6, 2022

The Big 10 Is OFFICIALLY Better Than The SEC + Will Deion Sanders Work Out At Colorado??

Harris English, and Tiger Is Back