So the people at Rockstar were nice enough to have us for another GTA session, this time with the Foreplay fellas and Zah. As you can see in the video above, we had your typical banter mixed with a classic Gametime moment as Smitty blew a 3-1 lead.

For those that missed it, here is a highlight reel of our first journey to Rockstar included Donnie and Coley.

Anyway, when we showed up at Rockstar, all of our avatars were ready for us. While people may decry Rockstar for being the cause of morals dropping in Western Civilization (just like Barstool but in video game form!), they are A-OK in my book since they make great games and even greater avatars. Onto the rankings! (Shout out to Queen Klang) 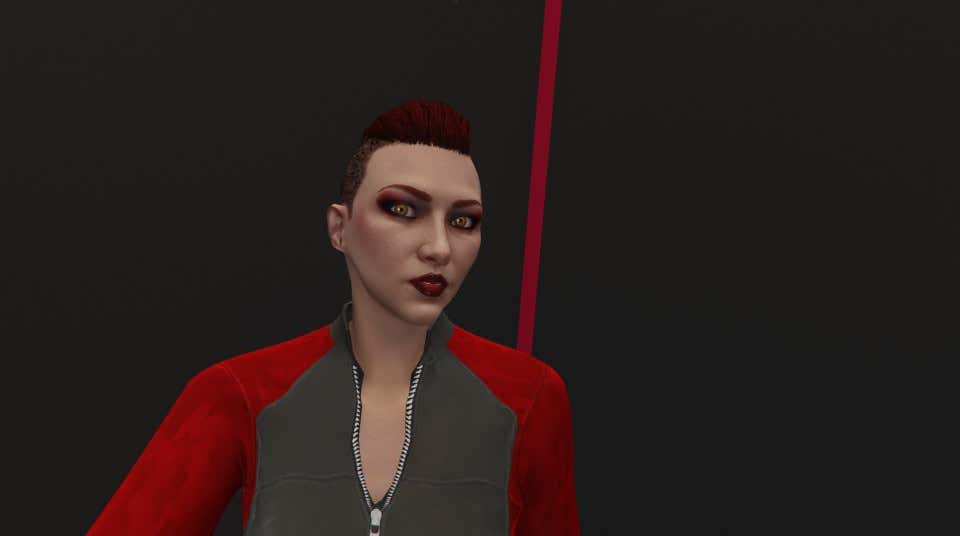 I’m not sure why Tech Guy Andrew was made a female other than he is a mysterious presence seldom seen on camera and Rockstar wasn’t sure what he looked like. You can probably fuck around and get sued in 2018 if assume someone’s gender is male because his name is Andrew. That being said, I wouldn’t mind if Tech Guy Andrew was my Valentine because he is giving off a serious ScarJo with short hair vibe. 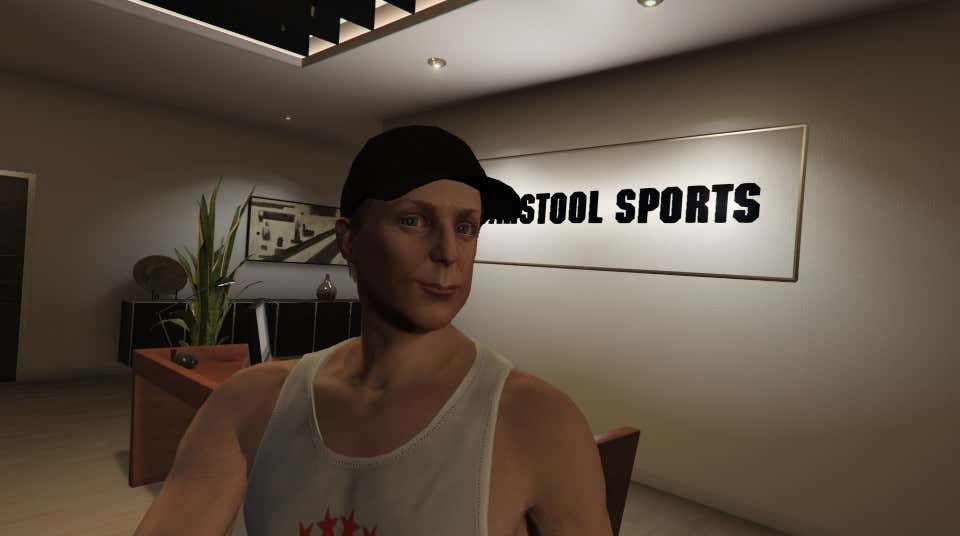 For as much shit as Riggs takes for his wonky eye, he is a pretty normal looking dude other than that. I guess Rockstar couldn’t lazy up the eye, so they gave him some sort of nightmare lip cleft situation. Not sure which would be worse to be honest. You stare into a person’s soul with their eyes, but having a fucked up clef makes that first kiss hurdle a lot tougher. Luckily for Riggs he is a handsome, smart man that is unfortunately very bad at Grand Theft Auto. 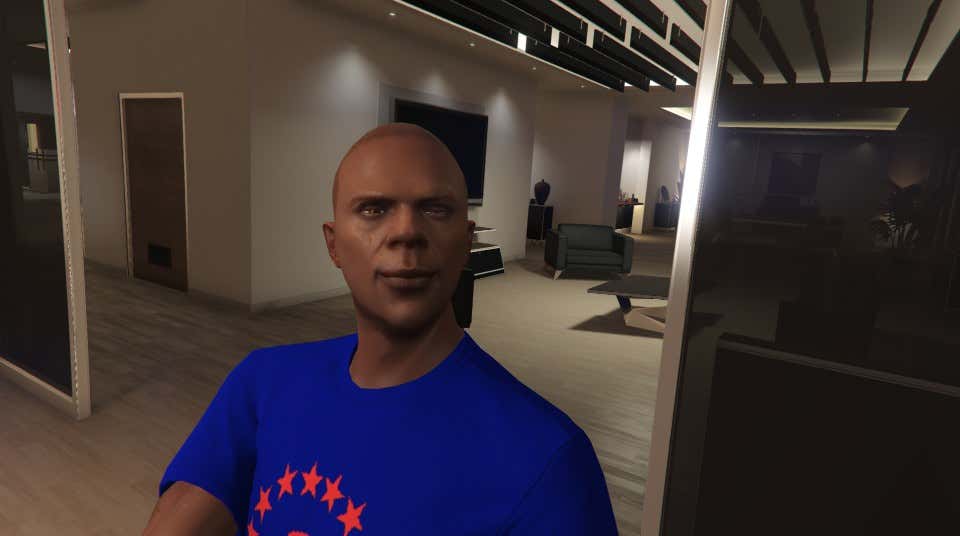 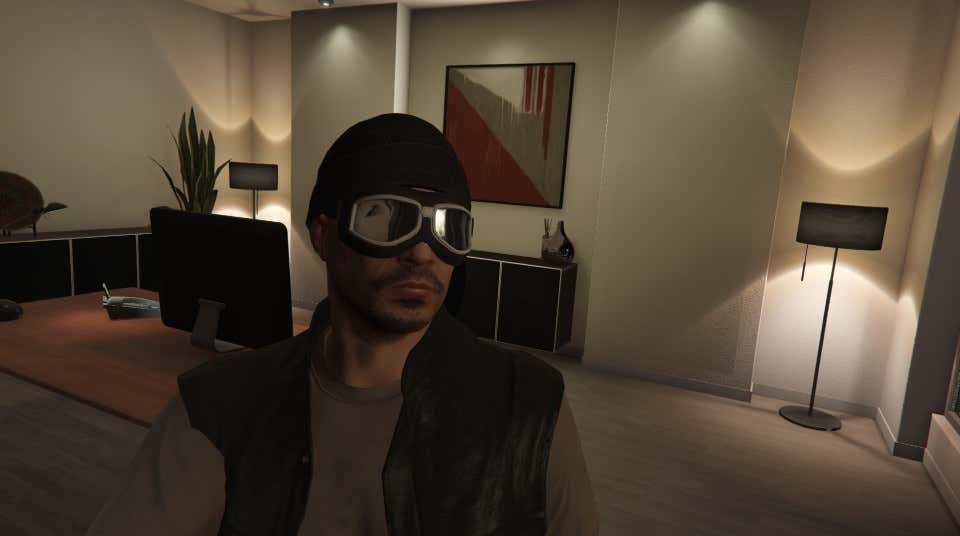 To be fair to the people at Rockstar, I don’t know if there is even a real way to create Coley in a video game. I don’t know how to even describe Coley. He is big but not fat. Large but not in charge. God still doesn’t know how he made Coley the way he is, which is probably why Coley has vertigo. Every time Coley looks in the sky towards God, a glitch instantly occurs in the Matrix. Coley is a quagmire, which is what I guess this dude is too. 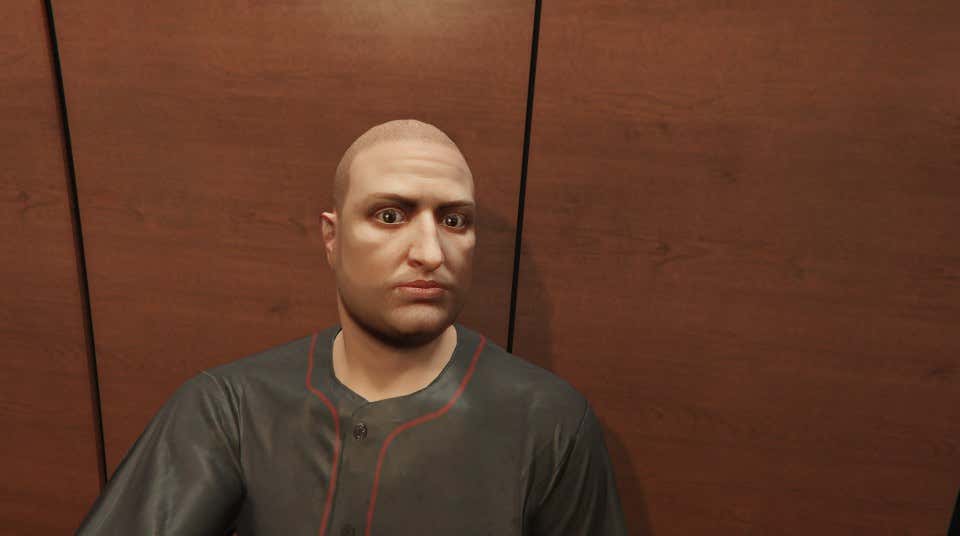 These power rankings are written in the order of best avatar, not best-looking avatar. Which is why my guy checks in so low. If we are being honest, Rockstar would probably have to change all the sliders in the game in order for my guy to haul anywhere near the weight I am towing on a daily basis. But Rockstar got the shaved head, the stubble, and the beak down pat. They just need to add a couple of massive bags under my eyes since I am a dad AND a blogger, which means I have the sleep pattern of a meth junkie. 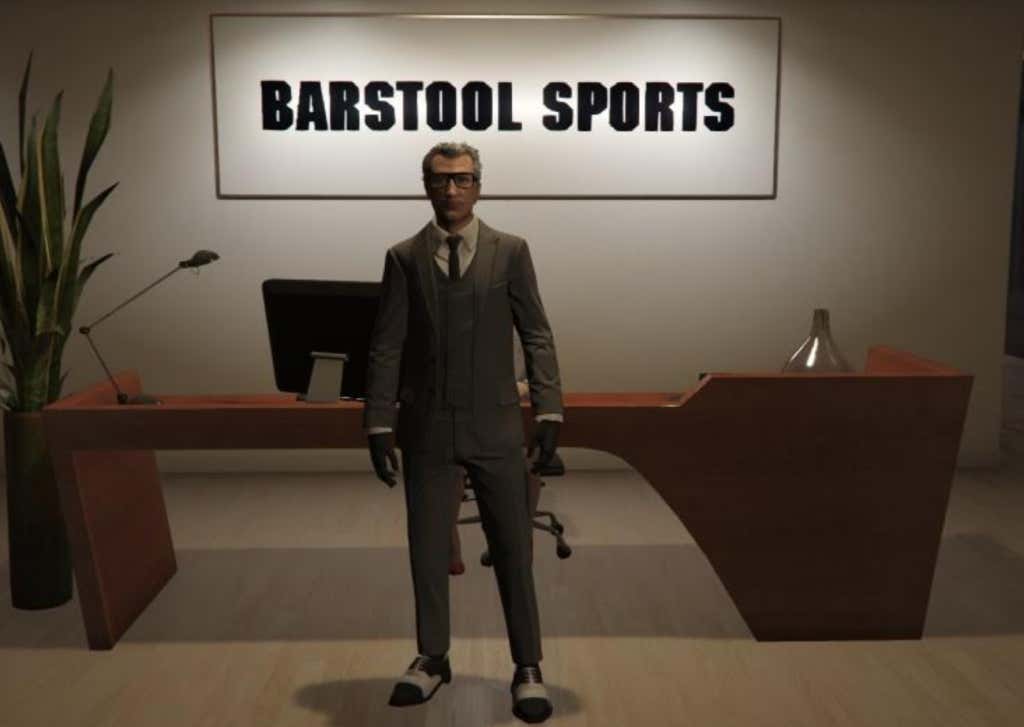 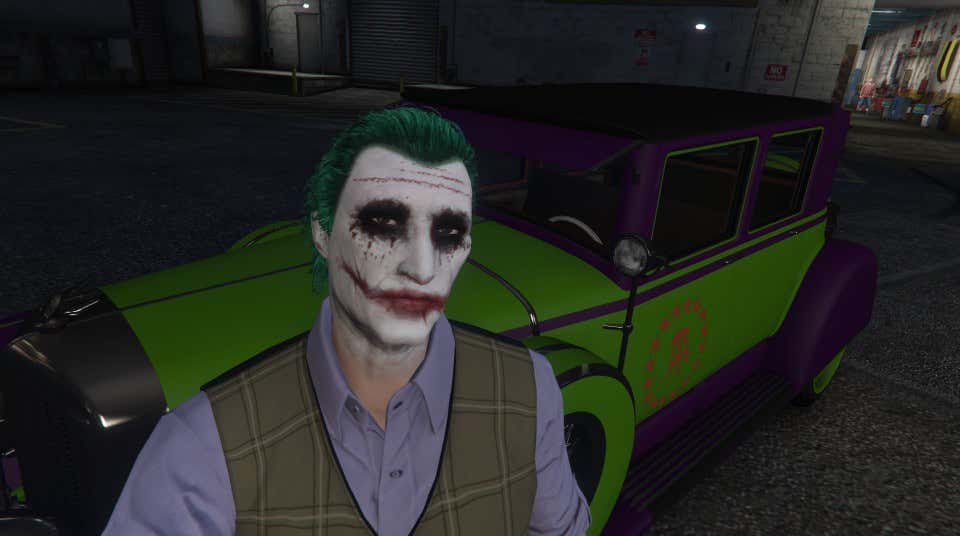 Anyone that has watched Gametime or seen any piece of content with Devlin knows he has a, ummmmm, beautiful mind. Impressions guys are always weird since I feel like they forget who they actually are sometimes. The fact the people at Rockstar made Devlin an Alfred avatar the first time we visited and then turned him into The Joker the next time we showed up is somehow all you need to know about Dev. The personalities of shapeshifters can have a wide spectrum of possibilities. Like going from Alfred to the fucking Joker. 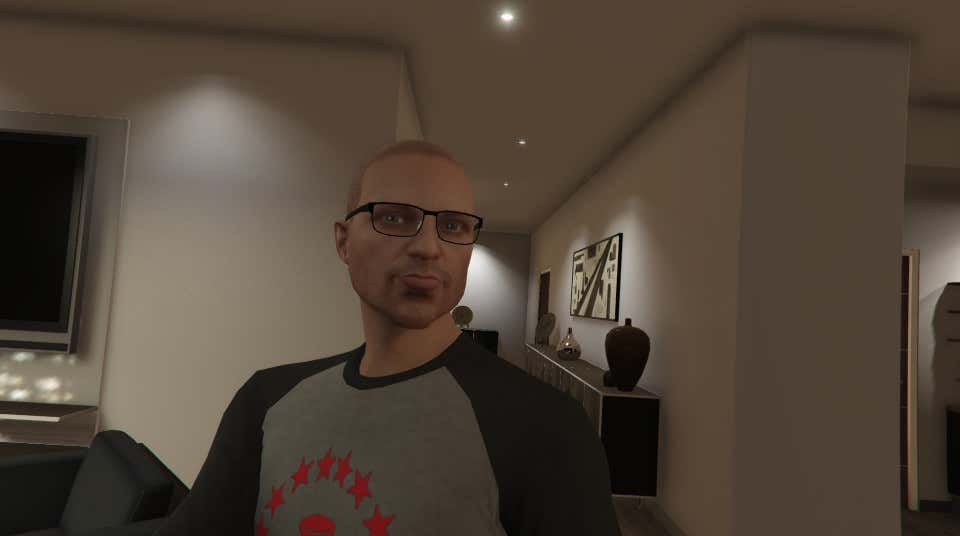 I laughed my ass off the first time I saw Trent because that dude IS Trent after he burns 20 more pounds with his eliptical #gang, gets fed up with the unhealthy Barstool life, and decides to become a computer hacker.

I guess all GTA characters have to look shady since they are made to kill innocent civilians and do hoodrat things with their friends. But my angel Medium Daddy would NEVER do such a thing. I mean look at him playing a game designed to murder people.

You can smell the Iowa innocence beaming off of him. 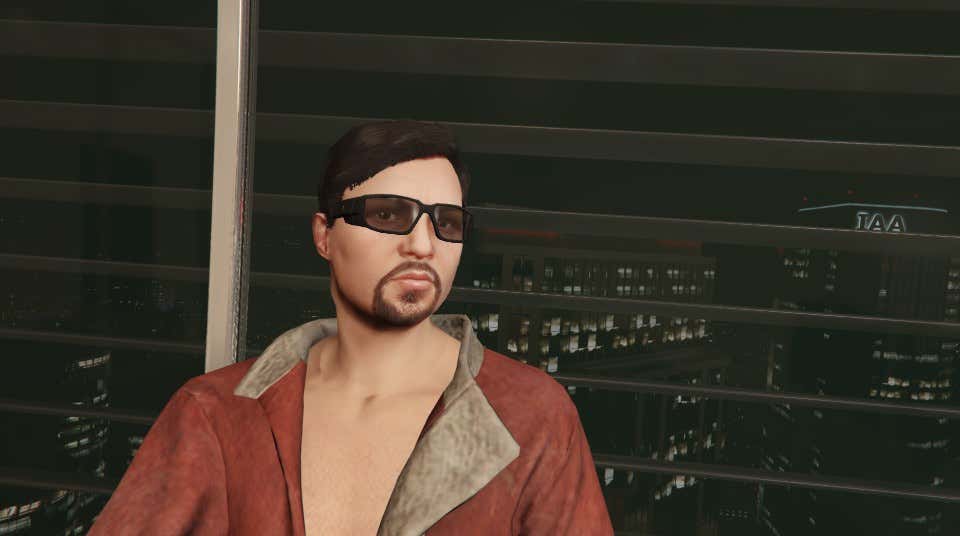 Donnie’s character was an A+ just like basically everything else he does here at Barstool. I only deducted a half a letter grade because I could see Donnie’s eyes. There’s something about not seeing that crazy fuck’s eyes as he does Donnie stuff is the only thing that allows me to watch his videos without being scared for his life. 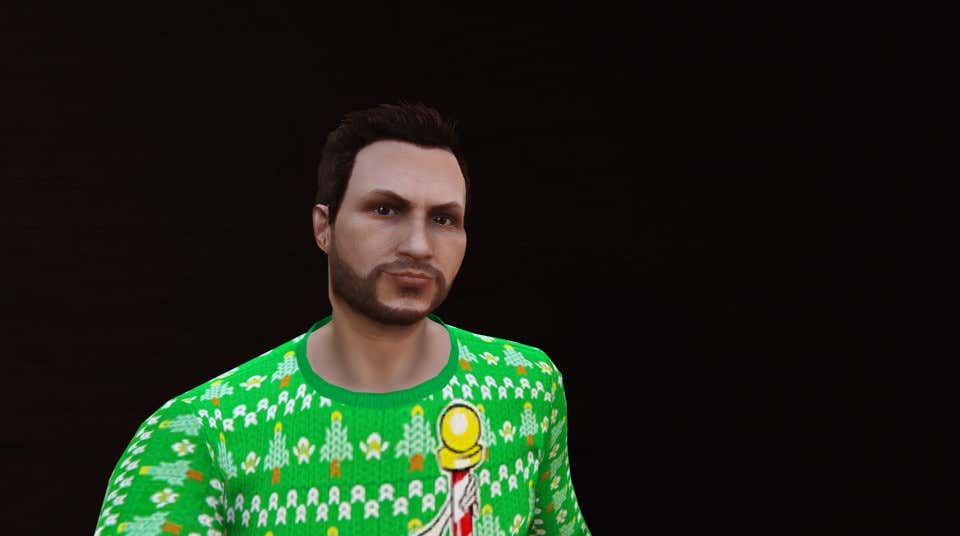 And coming in at Number 1 is Adam Smith as the Smitty Train continues to shock the world and catch W’s. Now let me be clear that while this character looks like Barstool’s resident blockhead and unofficial leader of Gametime, that is not the reason he took home the gold medal. No, no, no. GTA Smitty won these power rankings because of what his character was doing when we showed up to Rockstar on Friday.

Absolutely hilarious. I still think about that video multiple times during the day and it makes me laugh every single time. The fact that Dave Portnoy took a video of Smitty in the shower in Minnesota, caused #DICKGATE as well as all the subsequent fallout, and the people that make Grand Theft Auto found it so amusing they stuck Virtual Smitty in a shower to bust Real Life Smitty’s balls (not pictured) is nothing short of remarkable to me. Definitely one of those “I love my job and can’t believe this is real life” moments.

Now this is the part of the blog where I tell everyone to follow Gametime on Twitch. But this week isn’t for video game reasons. Devlin will be streaming Smitty’s journey into the heart of West Virginia before, during, and after Rough N Rowdy 2 (CLICK HERE BUY NOW!) on Twitch. I’m sure some stuff will make it to social media as well, but when you get Smitty on a live stream when he is being attacked on 10 different fronts by just people in his own company, you don’t know what will happen. So sign up and tune in.

And for the people that want to watch the full video of last week’s trip to Rockstar, here it is uncut to the gut:

We Placed *FIRST* In The World Series Of Warzone

The School System Has Failed Us...Eddie Doesn't Know The Original 13 US Colonies

Barstool Gametime Will Be Playing In The $300,000 World Series Of Warzone Tournament On No...

CoD: Vanguard Has Completely Exceeded My Expectations So Far

Kelly Keegs Finally Got The Halloween Scare She Was Looking For

The Tottenham Spurs Are Wildly Better Than Arsenal

Coach Duggs Showed No Mercy Against Frank The Tank

This Game Is Super Mario On LSD - Barstool Plays Cuphead

The 'Barstool Sports Vs. Geography' Rivalry Continues With City Guesser

Are Barstool Sports Bloggers Smarter Than A 5th Grader?

Hank Lockwood Is The Greatest Offensive Coordinator In Madden History

Competitive Video Games Are Just As Electric As Traditional Sports

Terrible News: Trent And I Are Being Sued For Malpractice

Which Barstool Employee Would You Choose To Perform Surgery On You, If Your Life Depended ...