I had two goals in going to China. The primary goal was to create a bunch of videos with Donnie. In accomplishing that, I also wanted to experience the “real” China. I may never travel to China again in my life, so I wanted to make it count; to see the sights, interact with the locals, and sample the flavors of life. I quickly learned that Donnie has a very different interpretation of what “real” China is.

Unfortunately for me, but fortunately for comedy, China has a ton of fake nonsense. Thames Town is a fake British town that China built as a counterpart to Western Chinatowns. The premise was to create a place that would make British businessmen feel at home while traveling in China on business. It’s one of the weirdest places I’ve ever been in my life. Just a totally random 4-square block British town plopped in the middle of rural China, and of course, NO British people ever go there. Instead, it has become a place where young Chinese couples go to stage wedding photographs. There are 5 or 6 tuxedo and gown rental stores in this tiny town. You go for the day, hire a photographer, get your hair and makeup done, slip into some formal attire, and take a bunch of pictures on fake bridges, in front of a fake Anglican church, or in front of a Baskin Robbins. We were the ONLY NON-CHINESE PEOPLE THERE. Honestly, a lot of these people just assumed we were “props,” part of the town. We took a LOT of pictures with people.

It was easily the weirdest day we had in China. But I’ll be goddamned if the woman on the left doesn’t make me spit out my drink every time I look at this picture: 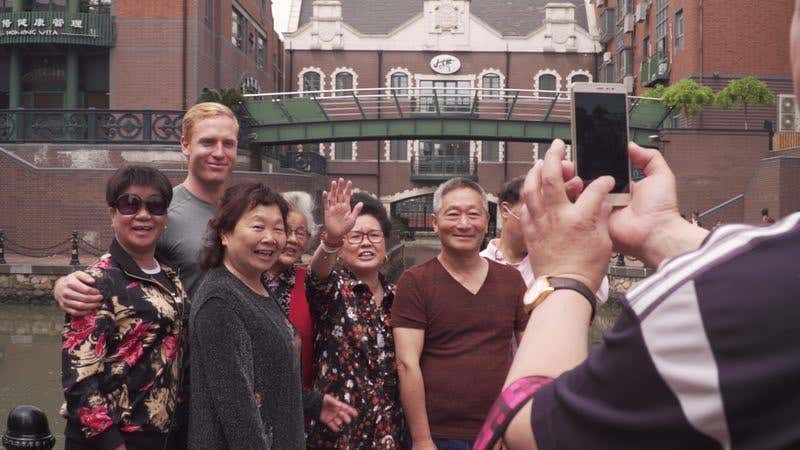