So this happened yesterday. Our marketing girl Kelly had potato skins for lunch. (Crazy move for a skinny girl by the way but whatever) Anyway she didn’t eat them all and threw her last 3 in the trash. Well lo and behold somebody picked them out of the trash and ate them. Pure poor people shit. Obviously we ran right to our 24/7 survielience cameras to see what type of savage would do that. Well in classic Barstool fashion somehow our 24/7 cameras mysteriously stopped taping right when the crime was committed. It was almost as though the footage was purposely deleted. That some sort of potato skin foul play was involved. Our tech guy Pete claims it was an innocent mistake. That sometimes our surveillance system just skips. He’s also the only person capable of deleting footage in the office. Hmm interesting Peter.

But just when I was getting ready to pin this on him security guard Ebony came forward and said she saw the crime happen in real time and identified the culprit. Ebony already paying for her salary in spades. I’ve given everybody a chance to come forward and admit it. So far nobody has. You know what that means right? It’s time for a confrontation…. 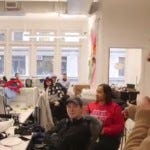 The Barstool Sports Advisors Are Back For The NFL Conference Championships

How A Fired Barstool Employee Made His Comeback (ft. Francis Ellis)

The Owner of Chicago's Most Popular Late Night Mexican Restaurant

Some Unfortunate Soul Will Be Putting On Kate's Adult Braces

Joe Burrow Will Pass Patrick Mahomes As The Best QB In The NFL & Brock Purdy Has The Eagle...

The Do's and Dont's for Food Delivery Etiquette

The Truth Hurts and I Ain't Told No Lie Yet feat. Charleston White - The Pat Bev Podcast w...