Other Stool Scenes note. Myself and the other Stool Scenes editors have greatly appreciated the positive feedback to the updated show. The best way for stoolies to show appreciation and actually make it count is to like the videos on Youtube and leave comments on it there. I know that is the classic youtuber pitch to “Like and subscribe to the this videooooo” but it actually makes a huge difference and can lead to the episodes reaching a bigger audience and creating new fans because of it. Again we don’t ask for much we just ask you go to the Barstool Sports Youtube page (subscribe to it if you aren’t already) and like and comment on the most recent Stool Scenes episode and all other Stool Scenes episodes going forward. Doesn’t take a lot of time and actually makes a huge difference so thanks in advance to everyone who takes the time to go do it.

Now to the story of Tiko Texas and how she came into the Barstool universe way back in 2015. For all old stoolies who remember this consider this a trip down memory lane, for new stoolies who may not have understood who Tiko was in Stool Scenes consider this a history lesson from someone who lived through it first hand. 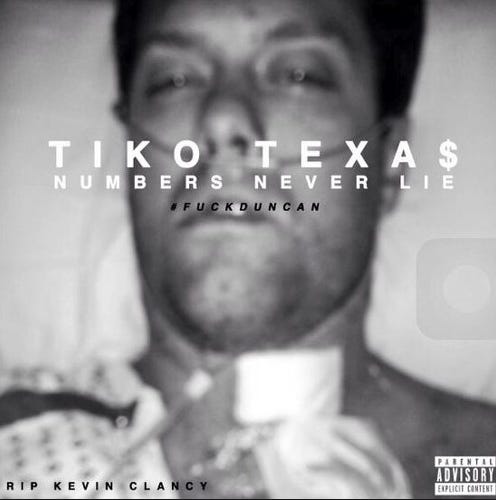 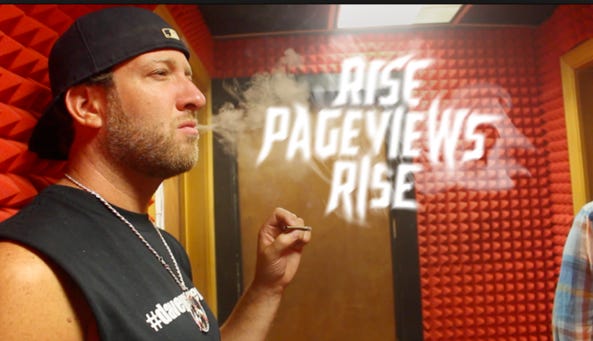 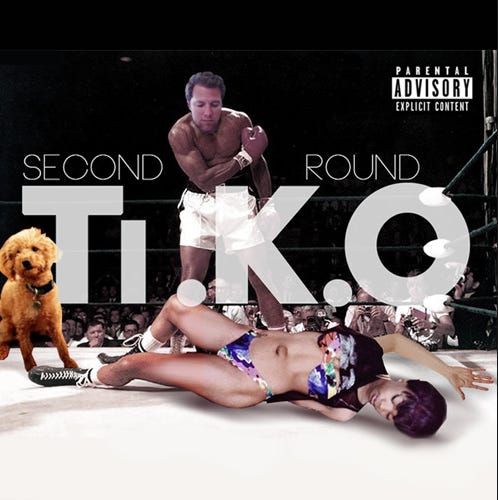 It all started on April 20th, 2015 with a blog written by one Kevin Clancy about Ariana Grande dumping Big Sean 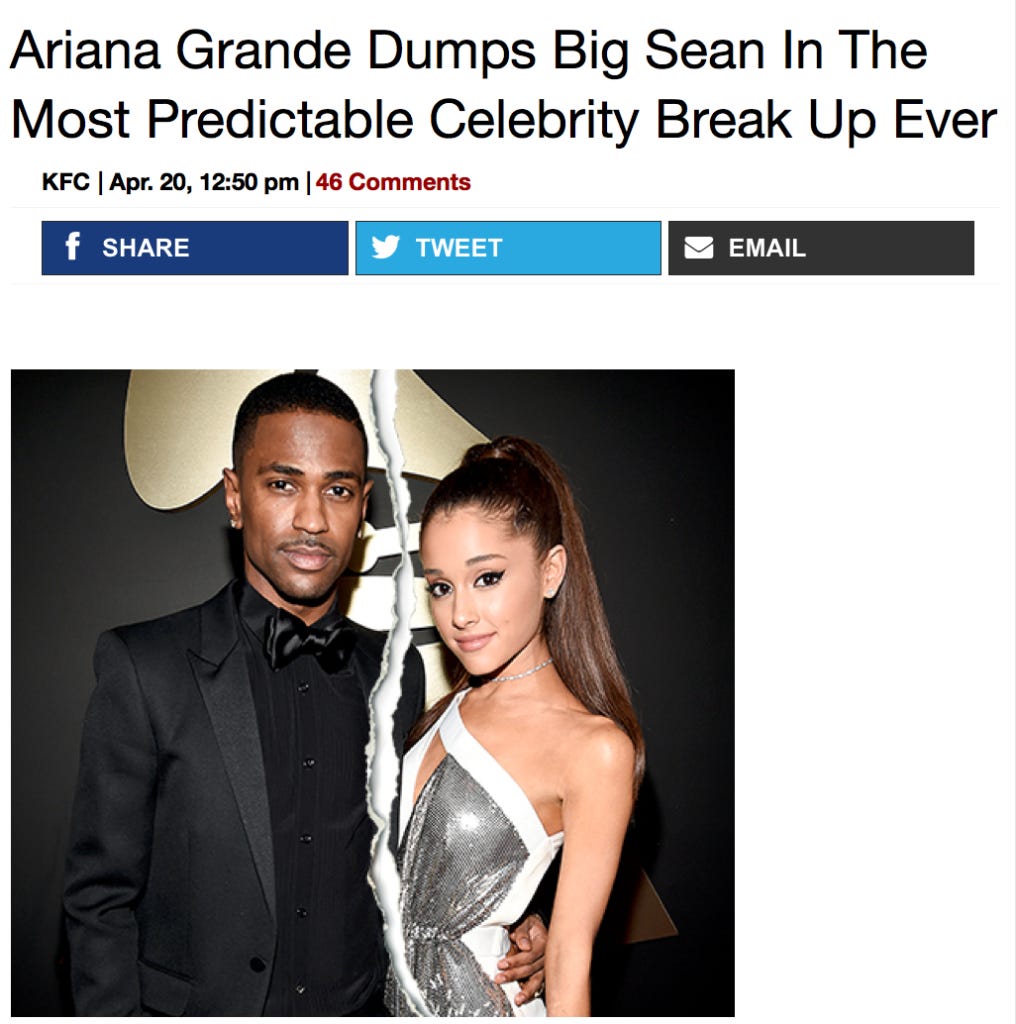 If you dont know by know, the Clancy Household is a big time Ariana Grande House. The Roommate has been driving her bandwagon since day 1 and I?m sitting shotgun.?That sassy little midget bitch is a superstar and she knows it. So it was really just a matter of time before she bounced on this clown. Like see ya, Big Sean. I?m a mega star and I?m gonna go date an actual famous person now! The 8 month fling with the B List Dwarf rapper is nice when you?re just starting out but now its time to move up. Like getting the call up from JV to varsity.

Just not a good look to be dating a C List rapper while you?re turning into the Queen of Pop. When you got a billion dollar pussy you need a billion dollar dick to go with it. Big Sean?s dick is worth like 10 grand, tops. She?ll probably gonna go find herself a white dude who matches up with her fame. I?d say Bieber is a perfect fit but shes gotta be able to dominate the relationship. She should link up with one of those British twinks from One Direction. Just dominate one of those fuckers.

PS ? If I was Big Sean I wouldnt even be mad. Everyone has been there when you?re in a relationship that you know doesnt make sense. Where you can genuinely admit to yourself ?I really dont know why this chick is fucking me.? And thats what this was. You?re a 5 foot 4 mediocre rapper. Just be happy you were getting some billion dollar pussy when you did. Dont cry because its over, smile because it happened Big Sean.

thanks to the internet gods this blog somehow got in the hands of prestigious Houston rapper and noted Big Sean fan, Tiko Texa$ 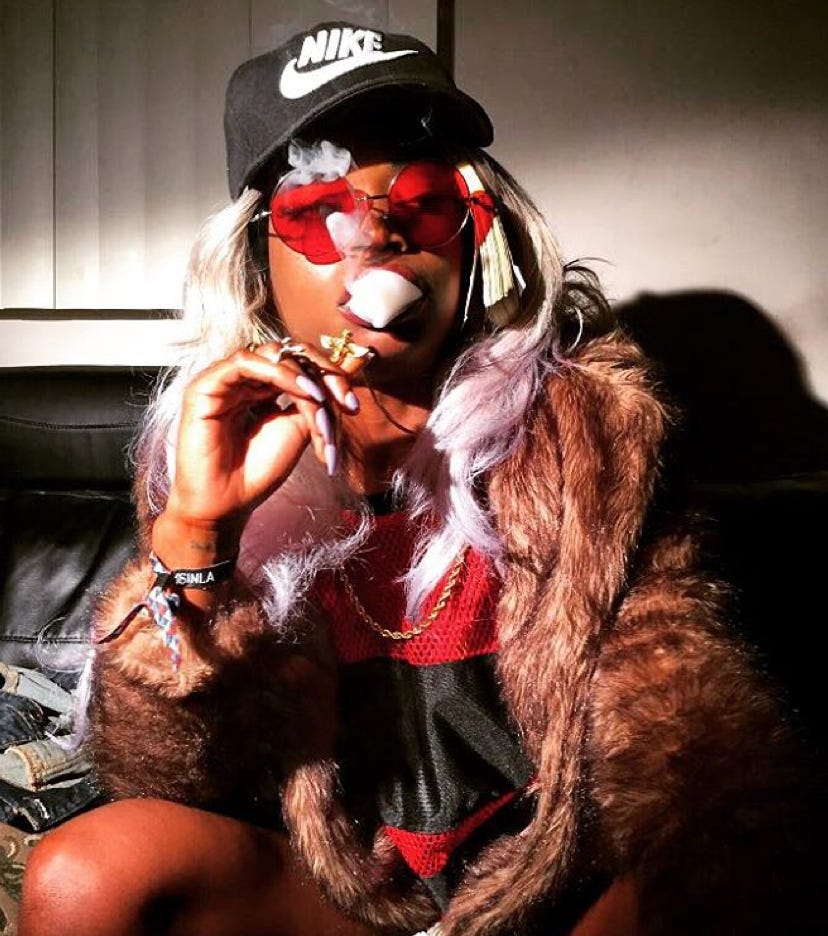 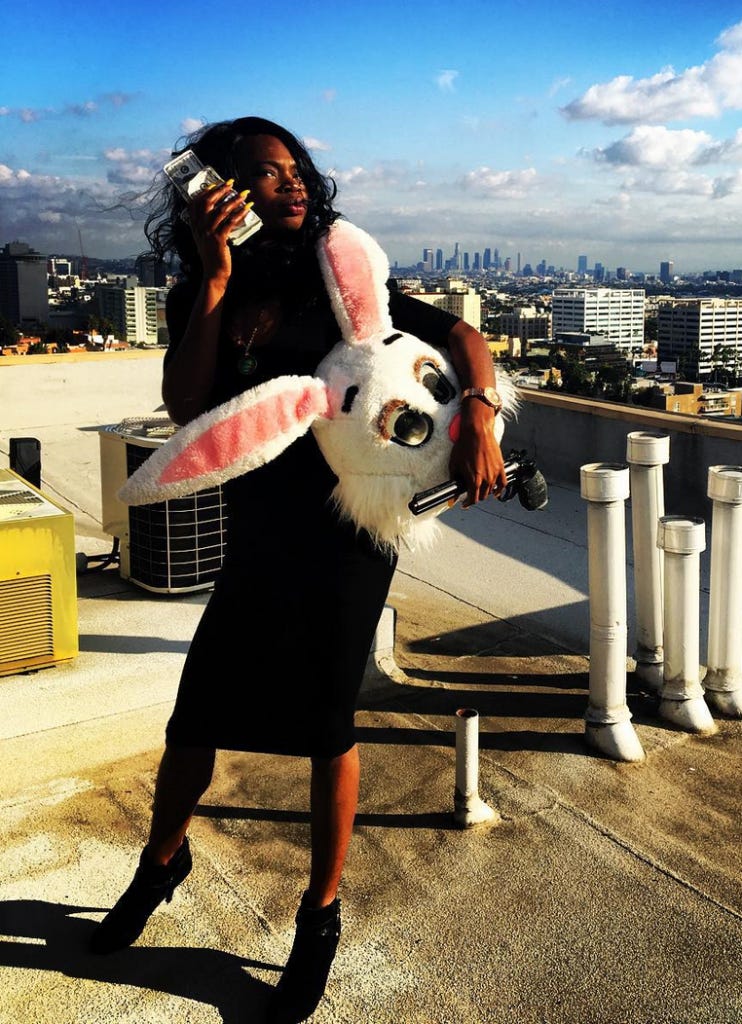 Tiko was none to pleased with the slander being thrown Big Sean’s way so she took to twitter to air out her opinions. The rest as they say, is history 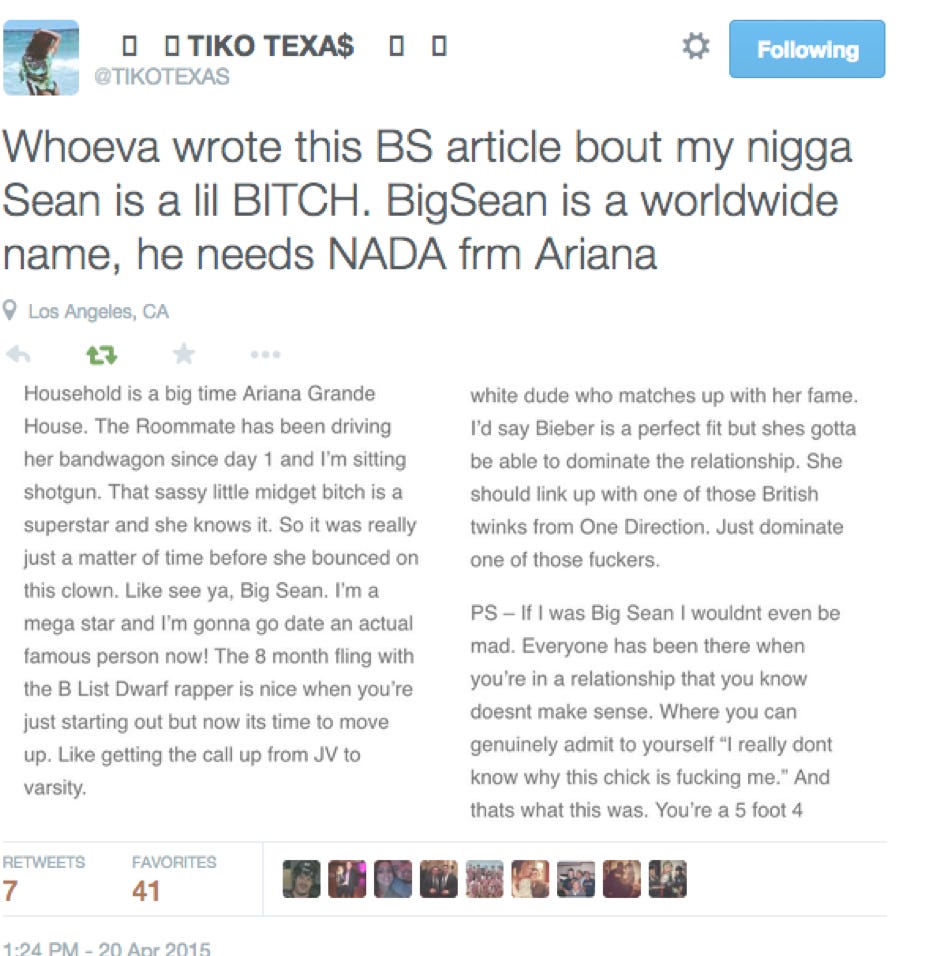 quick shout out to whovever it was that originally connected Tiko with KFC’s twitter that day. Without them none of this probably ever happens. 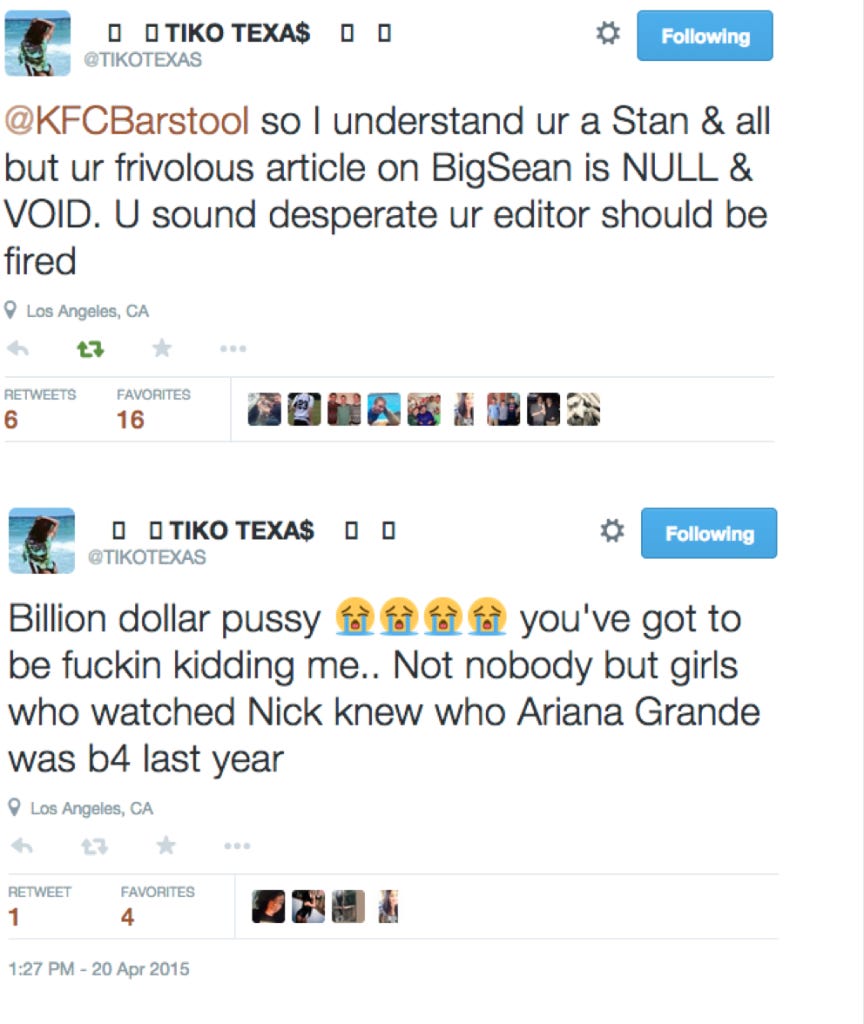 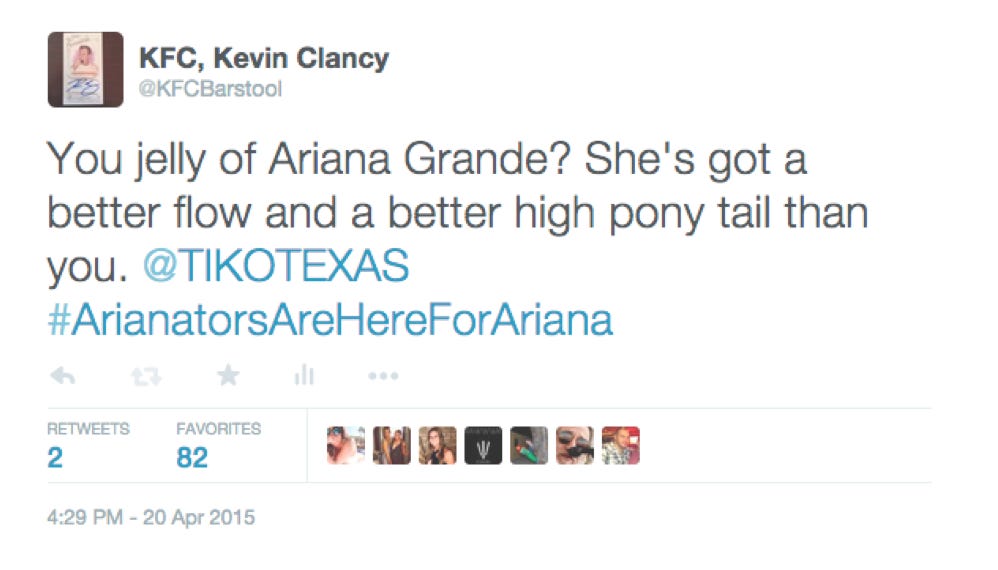 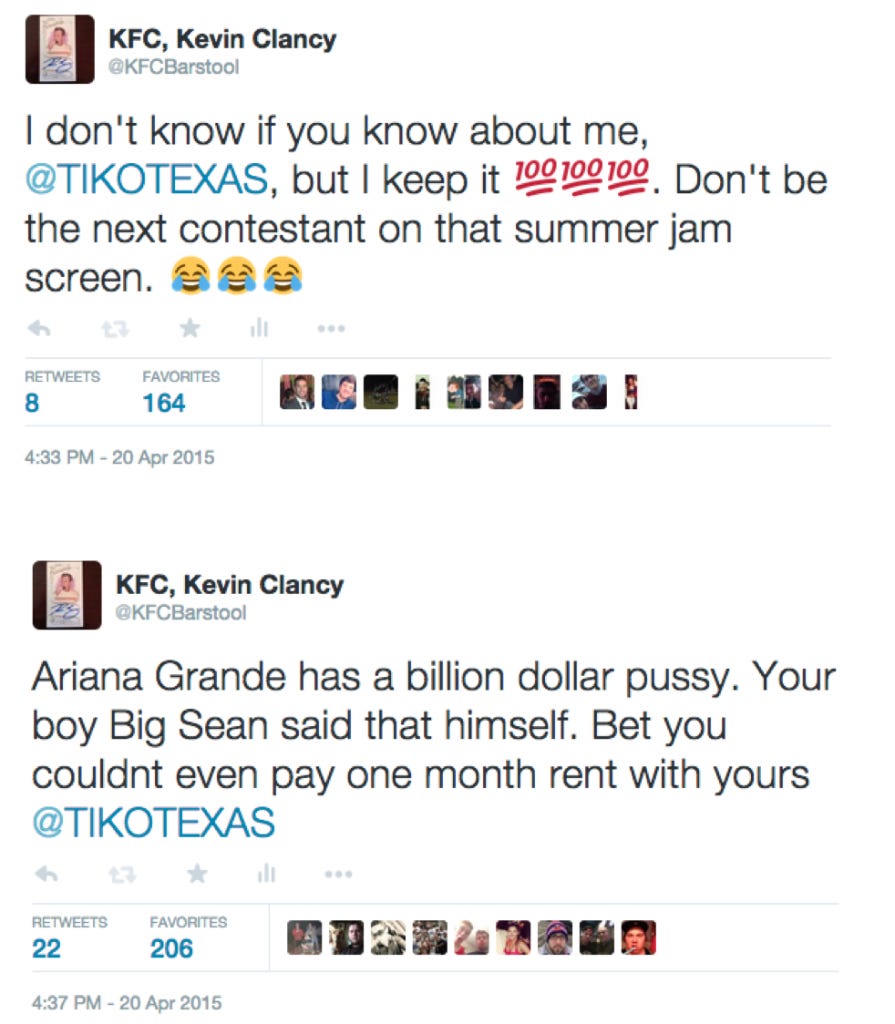 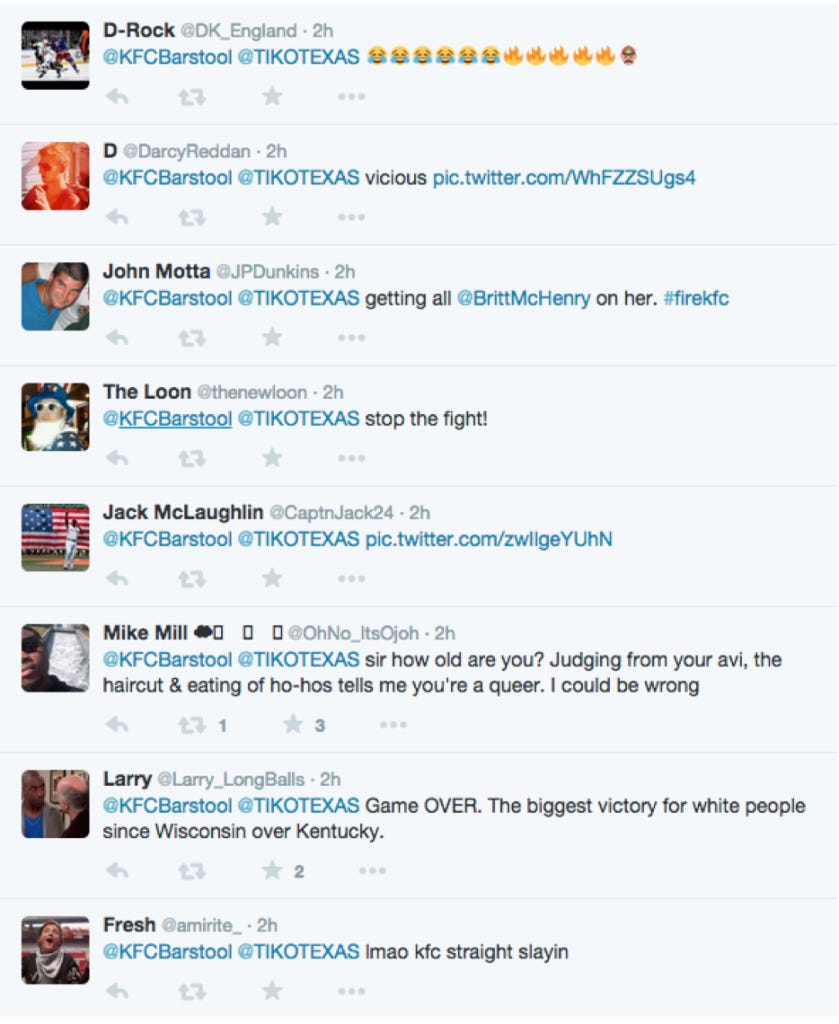 (can you find Tiko’s friend in that group of tweets?) 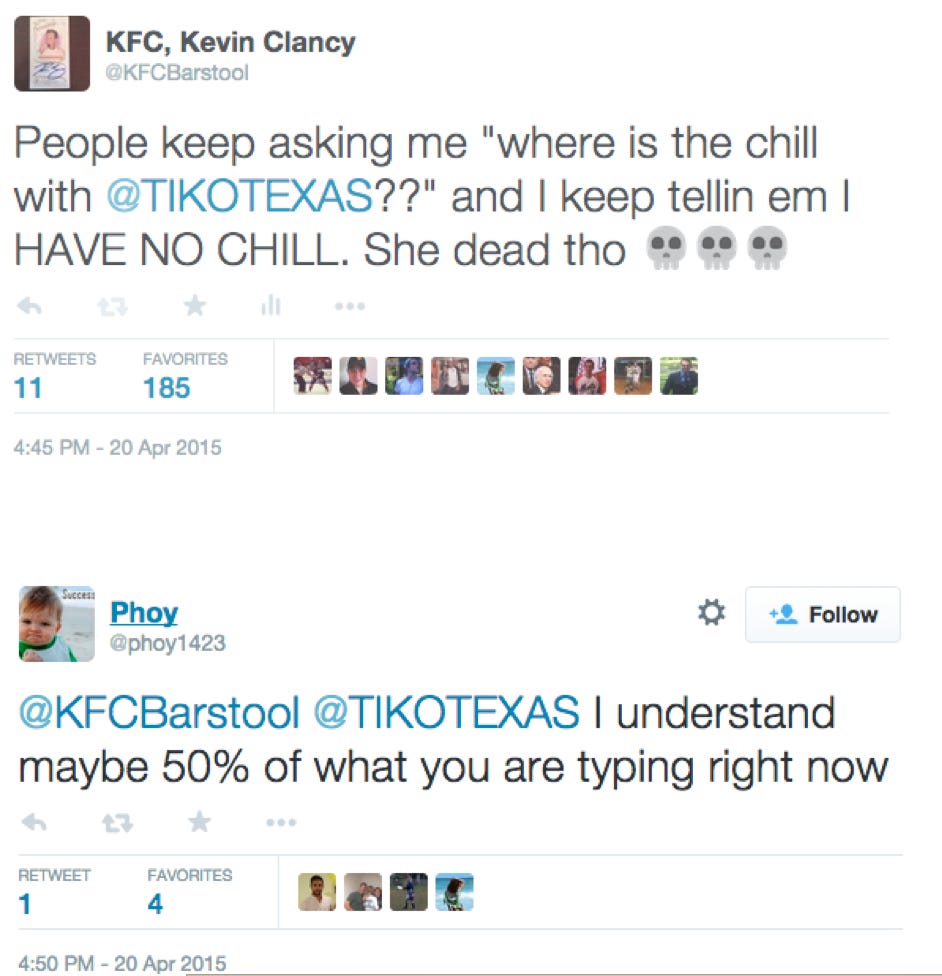 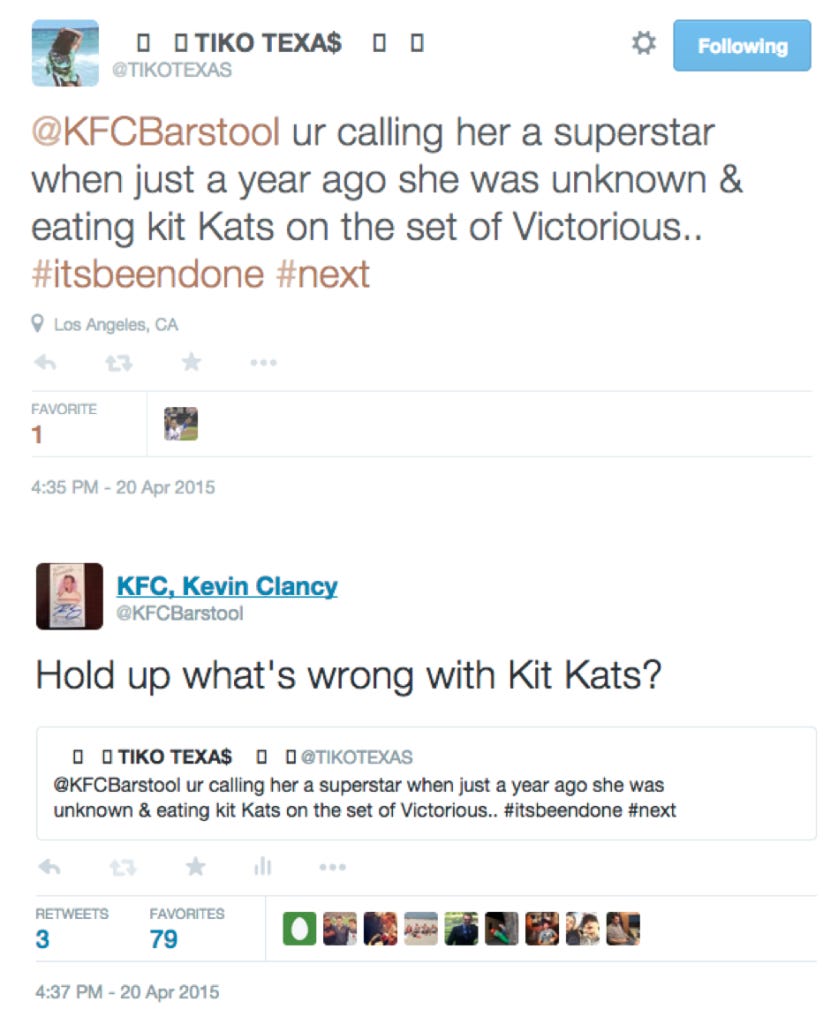 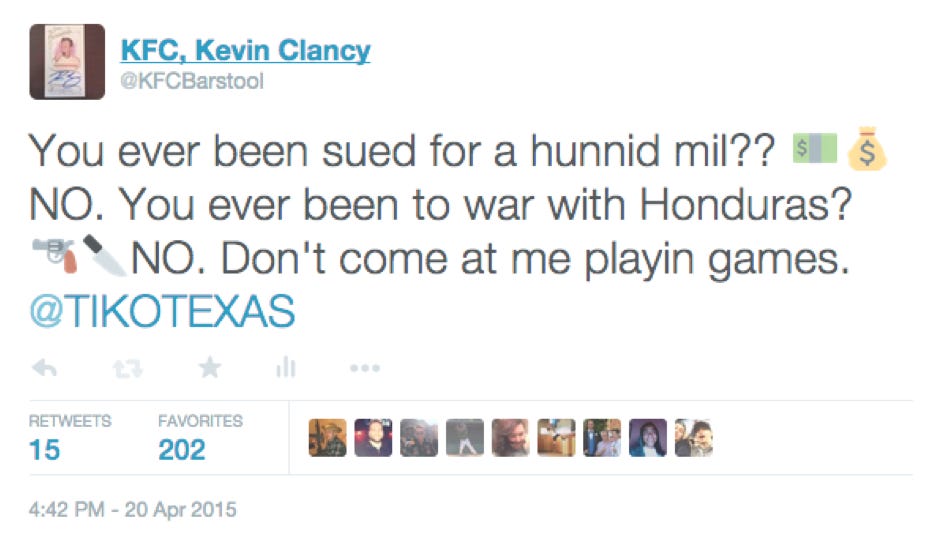 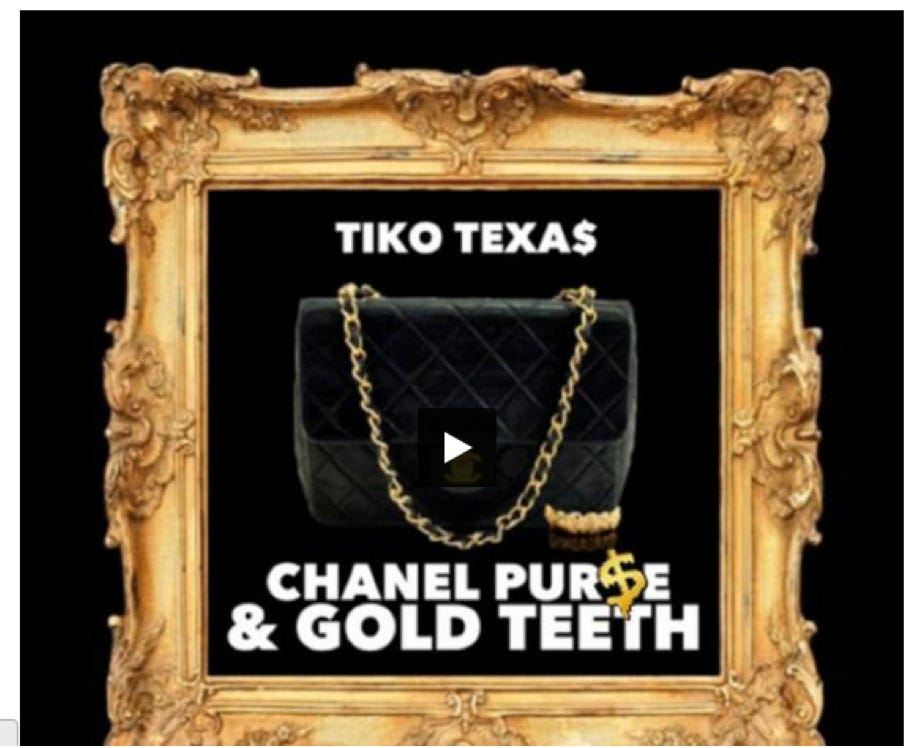 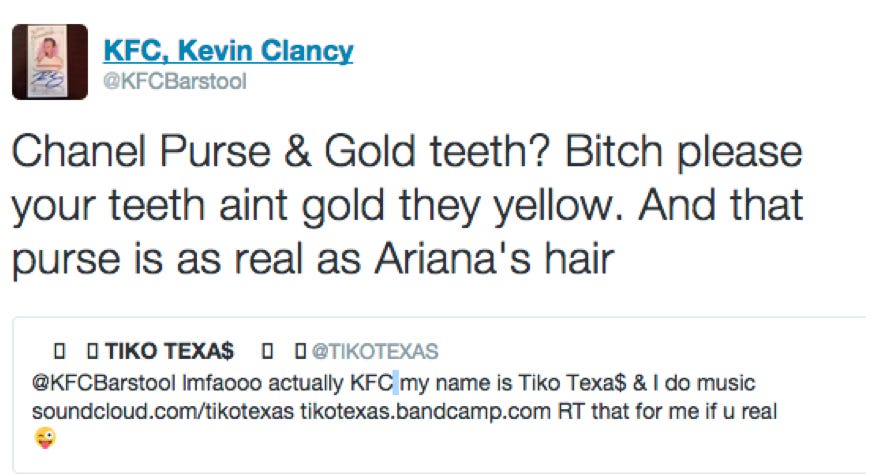 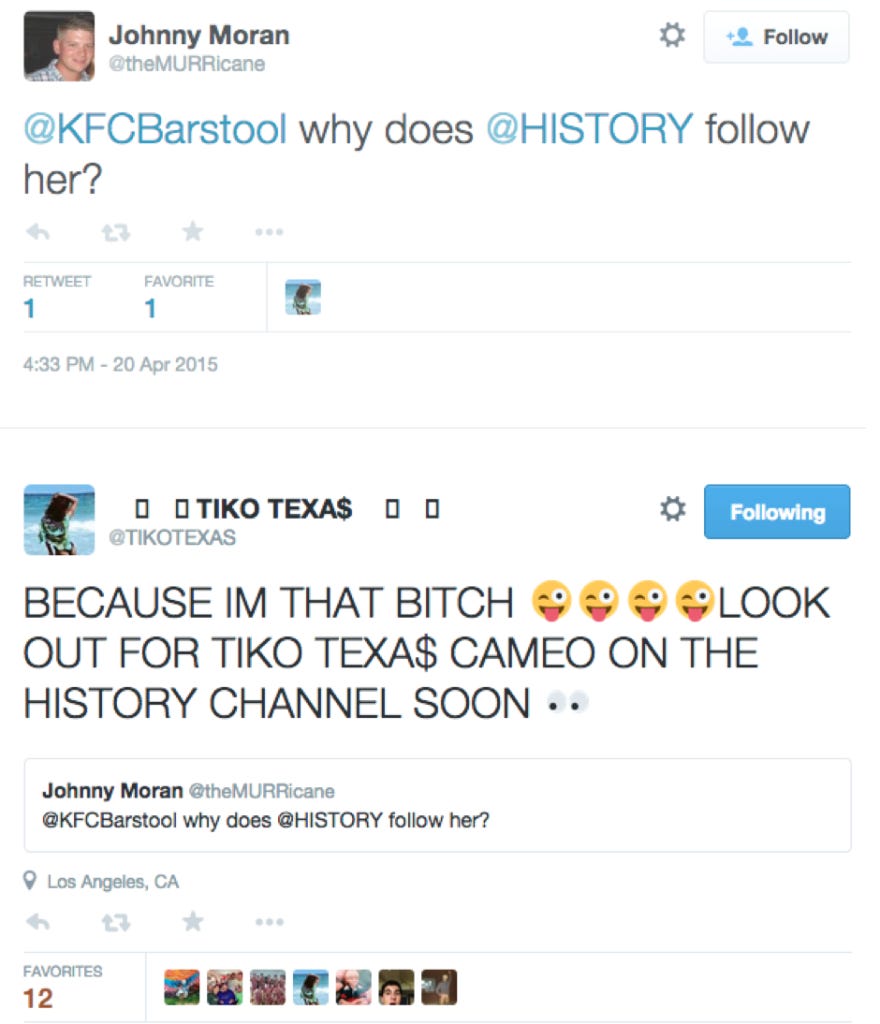 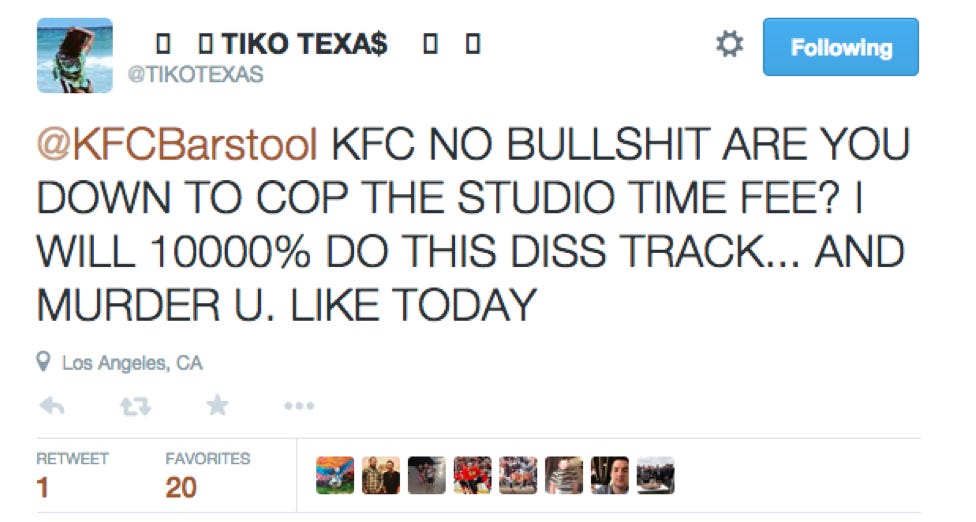 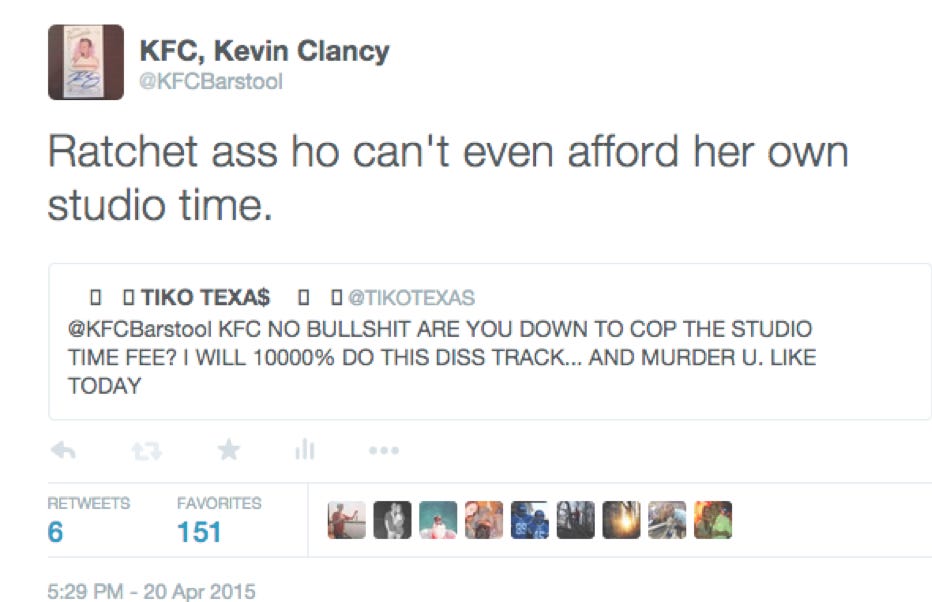 Portnoy chirped in from his vacation in Italy 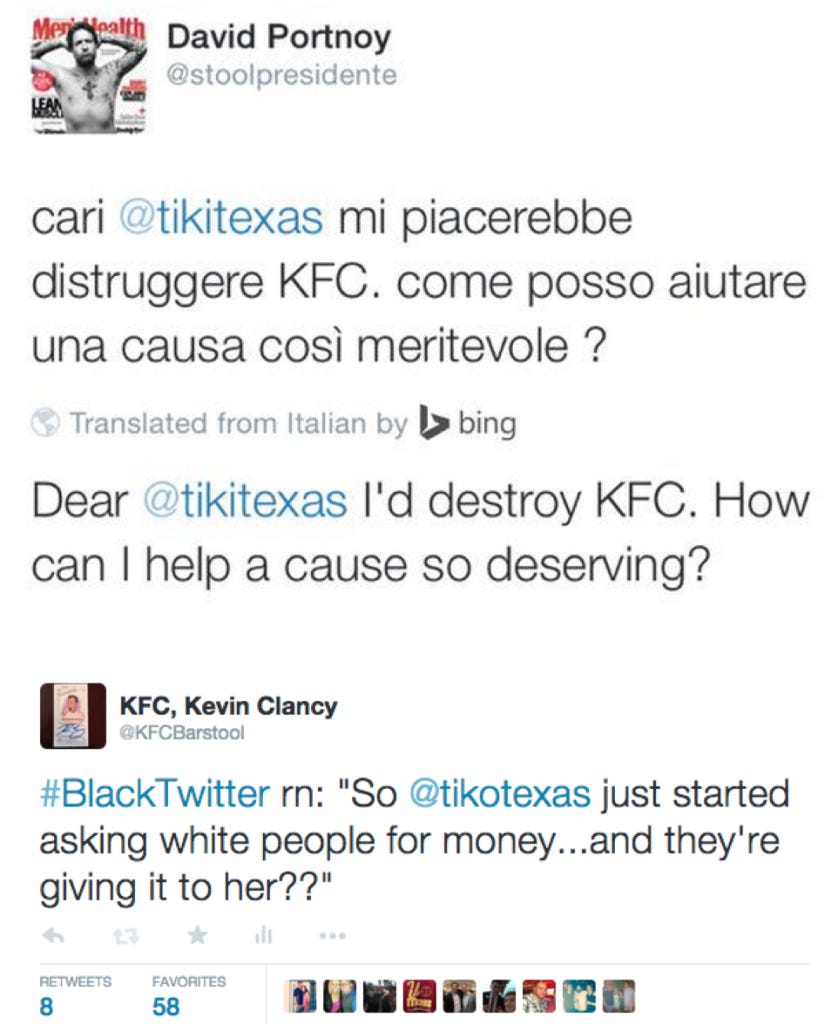 Rundown from June 1 talking about the diss track

2 weeks later KFC released his response to Tiko’s diss track “2nd Round Ti.k.o” and went in on Portnoy in the second verse

Full Rundown from that afternoon featuring Ti.k.o calling in from a display laptop in a? Target. This video has definitely gotten way funnier as time as passed. I used to not understand the people that said they missed the “old rundown” mostly because I was personally responsible for all aspects of it and was constantly dealing with internet, audio and video issues so I thought it was much better once we moved to NYC, watching this after not seeing it for a few years tho I definitely get it and it kind of makes me miss the old Milton office myself 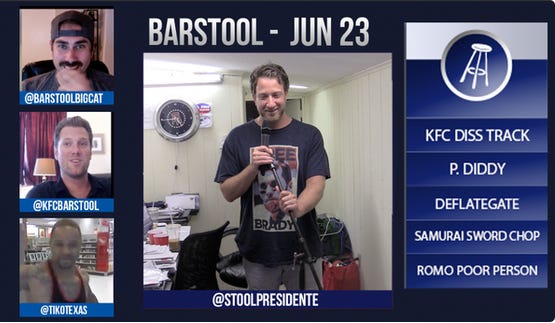 I can honestly say this was the hardest I’ve ever laughed while doing something for barstool, Dave trying to say his lines with flow and having an entire room of people crying laughing at him with him having no idea was priceless

At the end of the day numbers never lie right?

Stool Scenes 274 - The Philadelphia House, El Pres Returns to NYC & The Story Behind PMT a...

Stool Scenes Clip of the Week: Jake Marsh vs. His Glasses

Stool Scenes 270 - Barstool Interns Are Back and Weirder Than Ever

Stool Scenes 266 - Back in The Office

Stool Scenes 265 - Behind The Scenes Of The Barstool Classic With The Mayor Of Pinehurst A...