It's Thursday which means a new starting 9 episode is out and this one's different for a couple reasons. I explained earlier today we went heavy mailbag to add some literal and figurative life to the show. But we also got super deep on pitching philosophy and finding success as a starter. And one thing stood out to me again - the changeup remains the great equalizer in baseball.

Everyone talks about velocity and spin rate and movement. There's such a general emphasis on nasty, powerful stuff. It makes sense because that stuff is historically so much harder to teach and develop. But now the training is pretty standard for adding mph and finding a secondary pitch. Spend enough time in a lab and even you will have a decent feel for a cut fastball by the end of the summer. Yes, you.

Lost in this extended shuffle is the value of changing speeds. I think every big league pitcher would agree with that. But so many pitchers progress in their careers with that as an afterthought. A safety valve if your stuff doesn't play. So few pitchers come up in their careers with an appreciation for changing speeds because it's not until you actually have to change speeds that you realize it.

Honestly think with me for one second - what high school kid pumping 90 actually needs to throw a decent change? Now let him go to college and add some velocity with a serviceable breaking ball. 3 years later he's in A-ball throwing to 19 year-olds hitting with wood for the first time in their life. 20 starts later, the kid's in AA where almost every pitcher has good hard stuff. All of a sudden the gap between average and good just closed drastically. And now the difference between getting rocked vs. succeeding with fastball/slider comes down to command. The "stuff" can only take you so far.

It's this exact kind of situation that forces a pitcher to accept the need to change speeds. It doesn't happen at AA for everyone, that's just an example. But it happens in almost every pitcher's career at basically any level. Some guys get their shit rocked as 15 year-olds and learn the changeup early because they have to. Some guys make it to the big leagues and never really master the pitch because it's too late. Others get it in college or the minors. And a very select few are so good that they go their whole career without even sniffing the need to throw a change.

In almost all cases though, a pitcher will face the harsh reality they need to do something different to get to the next level. And for a lot of extremely successful guys, that comes back to the changeup.

It's an effective tool to generate overly weak contact from the best hitters in the world. As Jake says repeatedly on S9, hitters are so good east-to-west. Their discipline and bat control horizontally is so much better than it is vertically. The change works down off the fastball, so really any good changeup with depth is going to be inherently more difficult to track off a hard fastball up in the zone.

But way more important is the timing aspect. Hitters want to be in a groove. They like working off the same velocities, even if there's horizontal break to account for. That's much easier than a guy up in the zone hard, then down in the zone soft. At that point you need great balance to hit, and that's a huge exposure area for a lot of modern hitters.

Changeup/Splitter Usage for top 20 pitchers at generating swings and misses inside the strike zone. 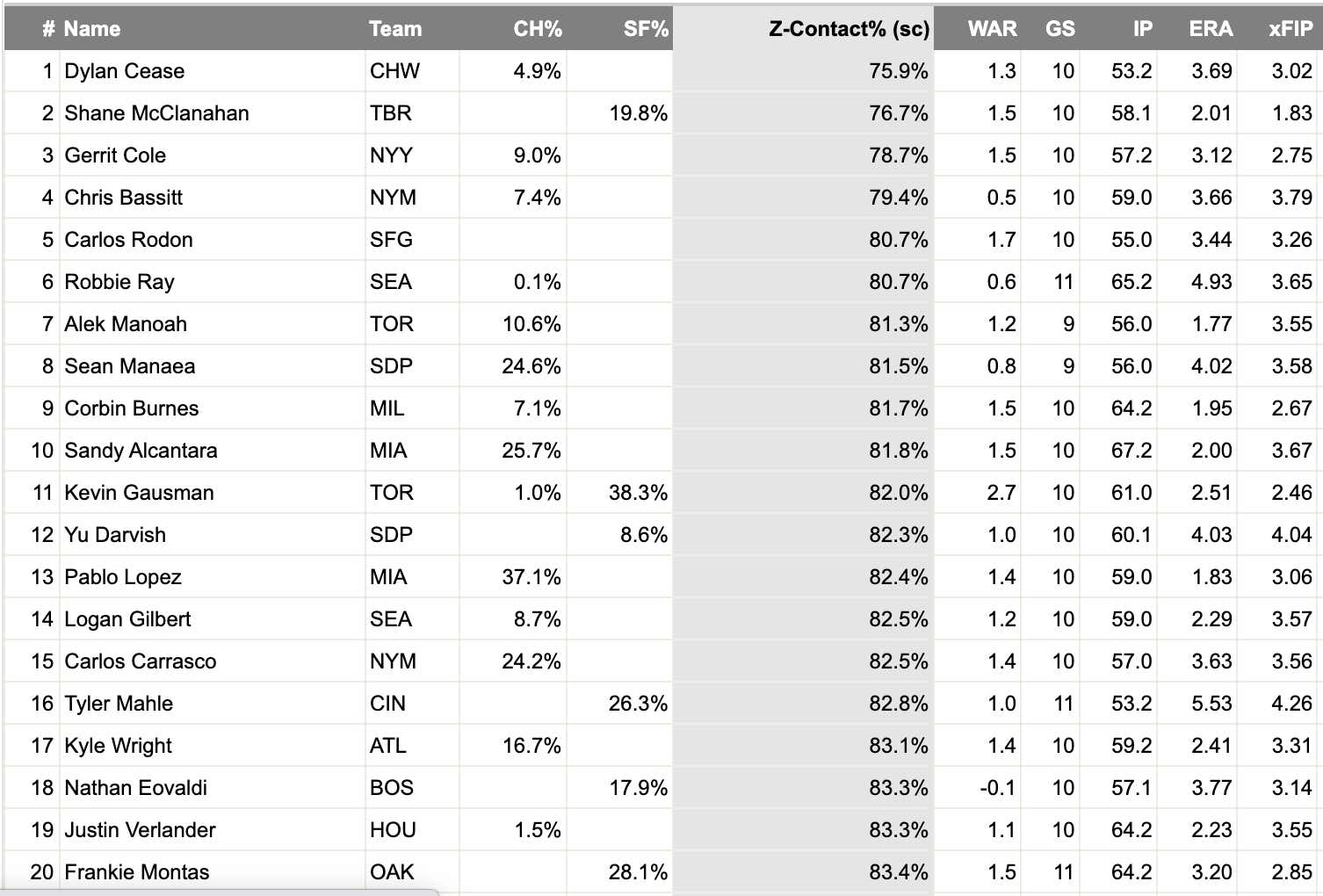 Personally I didn't throw a good one until I was a senior in college and was completely detached from reality the moment the ball left my hand. I had such bad anxiety as a junior that I decided I would only play my senior year if I could convince myself not to give a fuck about the results. Not about home runs or walks or errors or anything. I'd run my ego so hard into the ground trying to be perfect and I couldn't handle it any more.

So I take a summer off. The one where most college seniors are trying to get their name out to scouts and shit. I was just back in Champaign getting loaded with my friends at Joes Brewery, playing softball and taking summer business classes. That's when I made the conscious decision that I had to stop being afraid of failing. I had a limited number of pitches left to throw in my career and I wasn't wasting another one acting like a gigantic fucking pussy. I was coming back for my senior year but with a completely different mindset.

Anyways it took all that shit for me to throw a changeup with confidence. I had to become personally nauseated with my reluctance to throw a slow pitch aggressively over the middle of the strike zone. And then next thing you know it's actually a decent change. Guys are grounding out to second and popping up on 2-0. Damn shame I spent so many years being too scared to throw it. But same time I wasn't going anywhere anyways. It would have made no difference in the long run and ultimately I wouldn't change anything that brings me to this moment with you right now. No regrets guys.

That's my own personal journey with the changeup. I didn't dominate hitters with it or win any awards. In fact my career ended like most - lonely and unspectacular.

But you better believe I found that fucking changeup before it was over. And as strange as it sounds, nobody can ever take that feeling away.

For more on why the change up rocks and why MLB hitters struggle with it, listen to today's Starting 9. Dempster gets into grips and stories and just a bunch of cool shit that I'm very proud to share:

New episodes of Starting 9 are released every Tuesday and Thursday morning. Subscribe here.