The Barstool Fantasy Football League kicked off last night with our league draft. We did a salary cap draft with $200 per team. Only two people (Mintzy & Reags) had experience with a salary cap draft previously, but credit where credit is due, Mintzy did a great job preparing everyone for what was to come and did a dandy job as the host:

My job is to analyze the teams and to do that effectively, everyone has to be aware of the scoring system. It's a superflex league, so the option to play two Quarterbacks. Starters are:

with six bench spots. The scoring is:

4 points for a passing TD

1 point for every 25 yards passing

1 point for every 10 receiving yards

1 point for every 10 rushing yards

6 points for every rushing or receiving TD

The software gave grades last night, but here are MY grades & analysis: 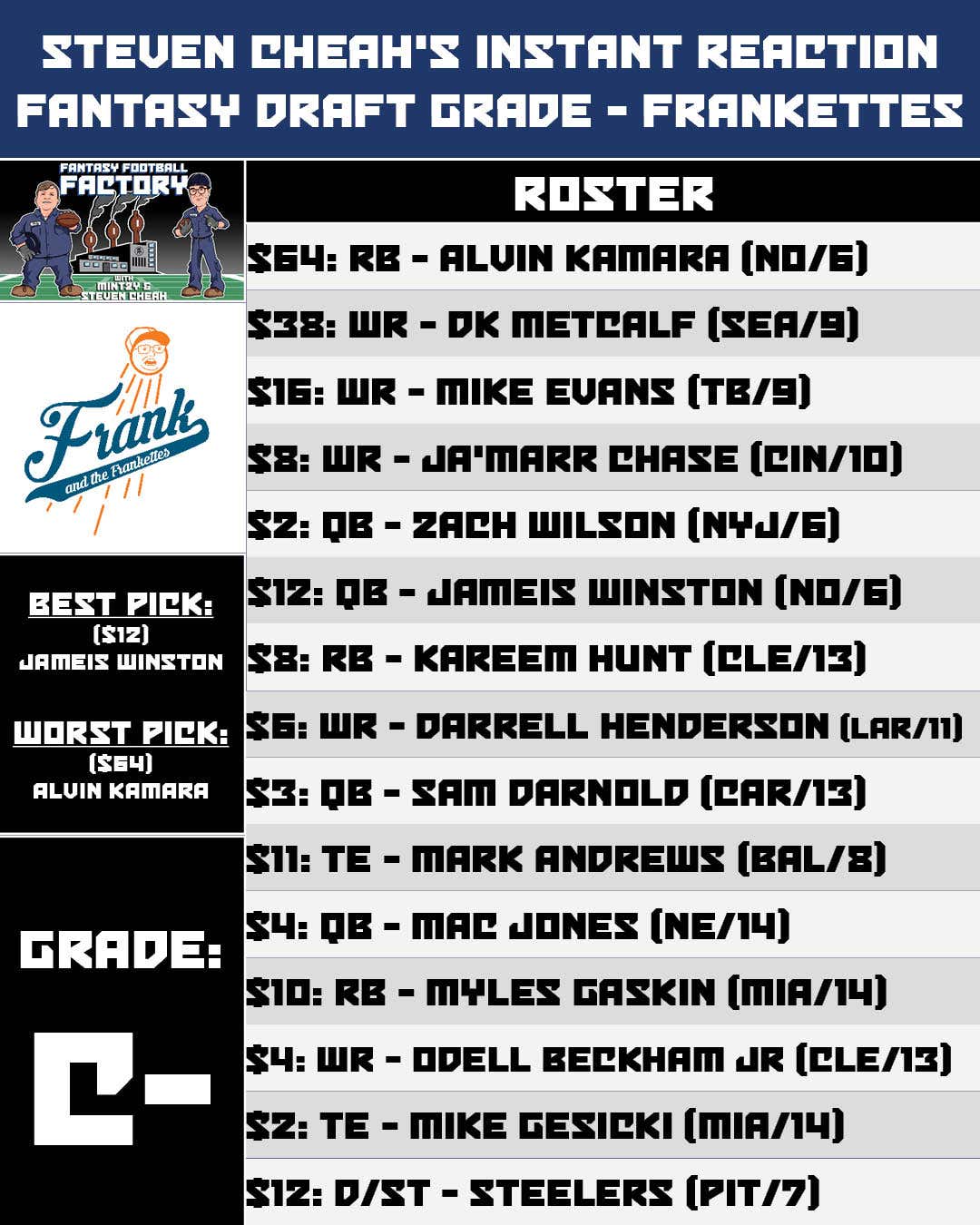 The software we used actually gave them best draft but I'm way on the other side of the fence on this one. They overpaid on Alvin Kamara ($64) by a lot. He went for $7 more than Dalvin Cook! I do like them getting some good depth with Myles Gaskin, Darrell Henderson. Their QBs are iffy with Jameis Winston being their QB1 and a hodgepodge of Zach Wilson, Sam Darnold, and Mac Jones being their superflex. They're also very thin at WR with a Ja'Marr Chase and Odell Beckham's carcass competing for the #3 WR slot. Mark Andrews was a sneaky value at $11 though. They mismanaged their budget and spent their remaining $12 on the Steelers defense to close their night. 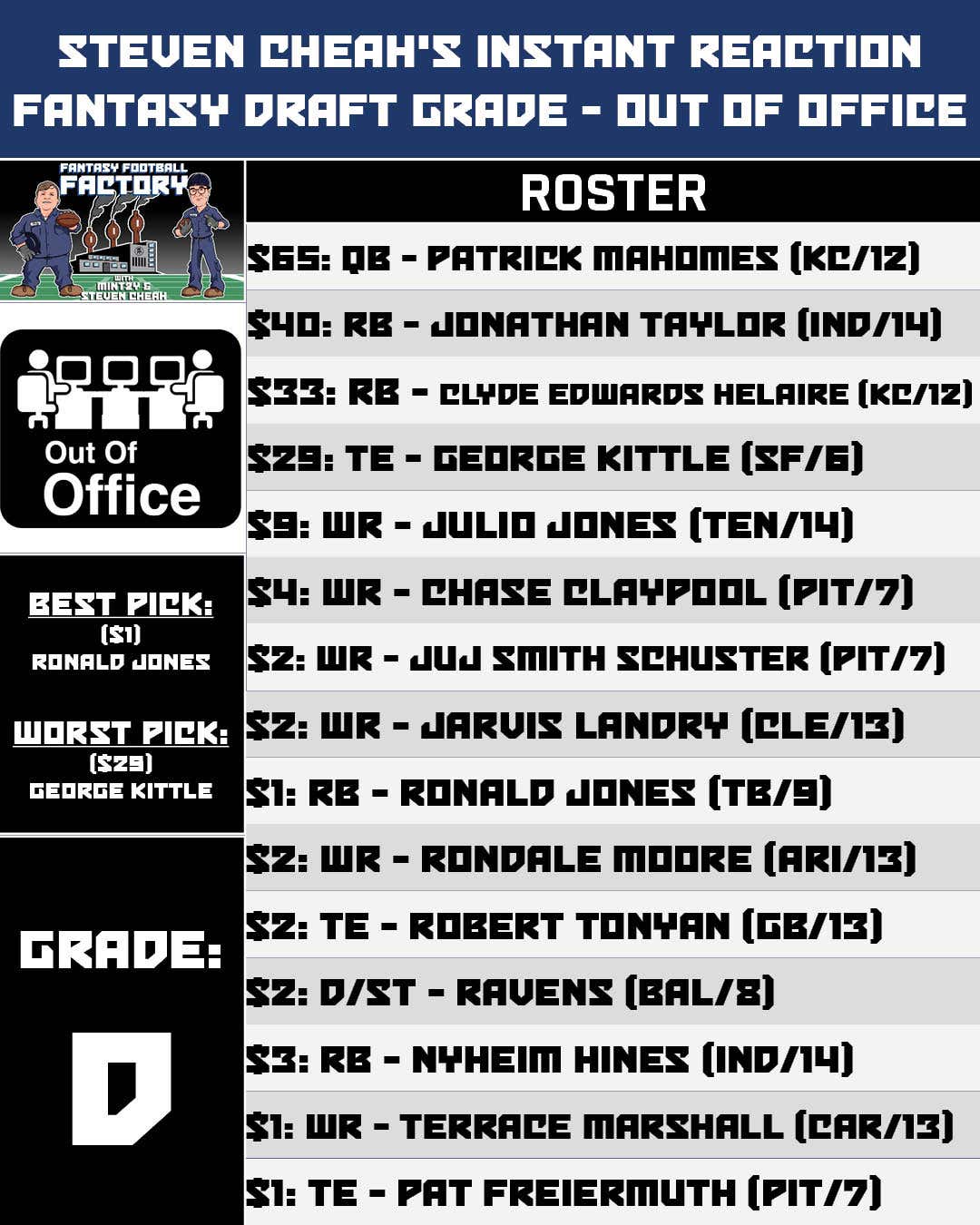 Rough go here for this group. They really set the bar with the Mahomes pick early spending 32.5% of their budget on a guy who finished QB4 last year. Mahomes is fantastic and the favorite for QB1 this year, but still way too much money. While George Kittle is one of my favorite players in the NFL, his fantasy value is overblown and to pay $1 extra dollar for him literally just after Darren Waller who is a superior fantasy player went at the same position was criminal. Their WR corps is tough with Julio Jones and a couple Steelers WRs. Jonathan Taylor and Clyde Edwards-Helaire are a nice backfield combo, but this team's draft strategy was puzzling. They only took one QB and drated three TEs. Big miss there which forces me to give them a D grade. 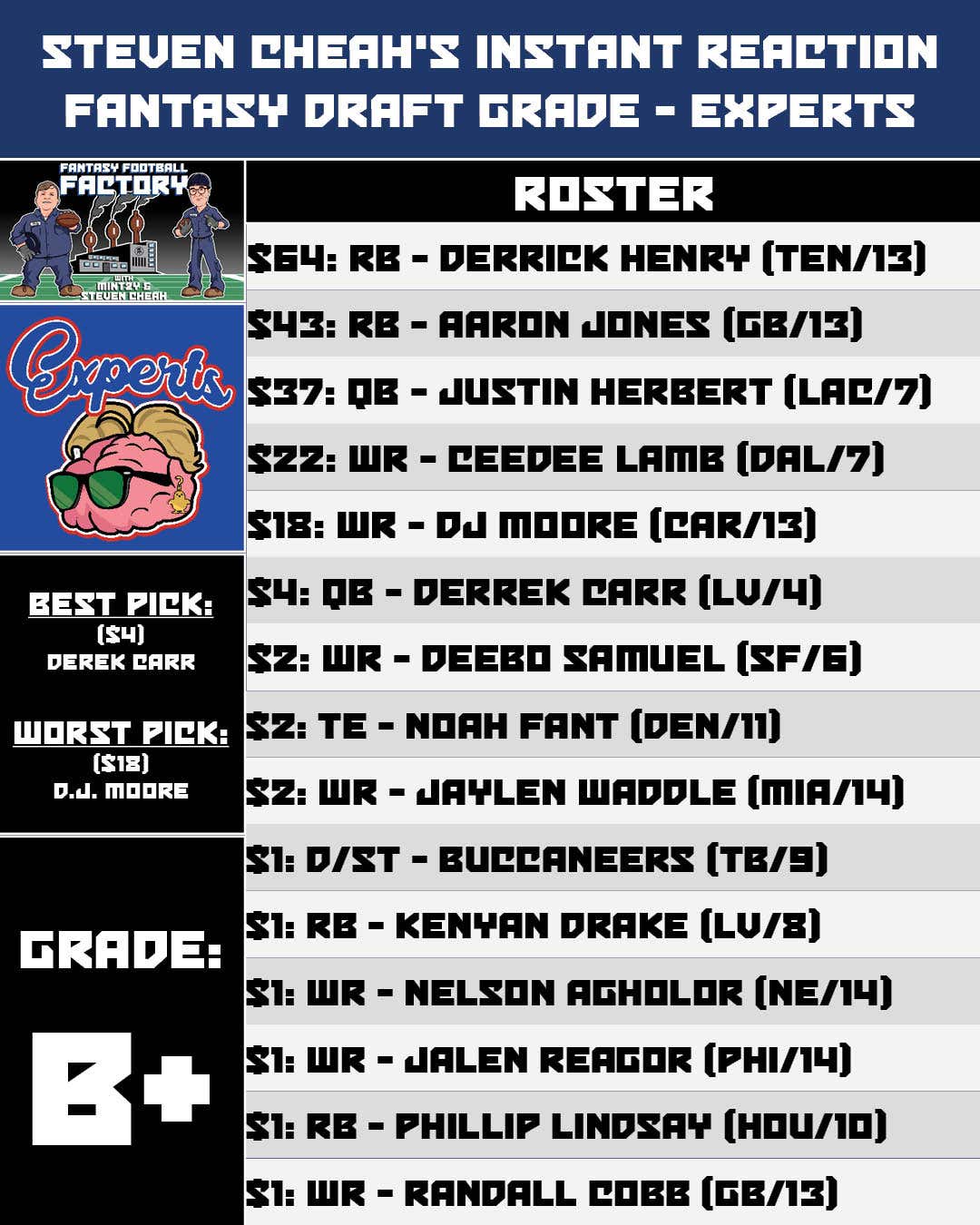 The Experts did a nice job loading up their backfield with a lethal duo of Derrick Henry and Aaron Jones. Henry went for a bit higher than he should have, but Jones was a steal at $43, so it evened out. Justin Herbert and Derek Carr are a formidable QB duo in fantasy and their Receiving Corps not bad considering they went so heavy on RB. This team has major potential if they can all stay healthy. 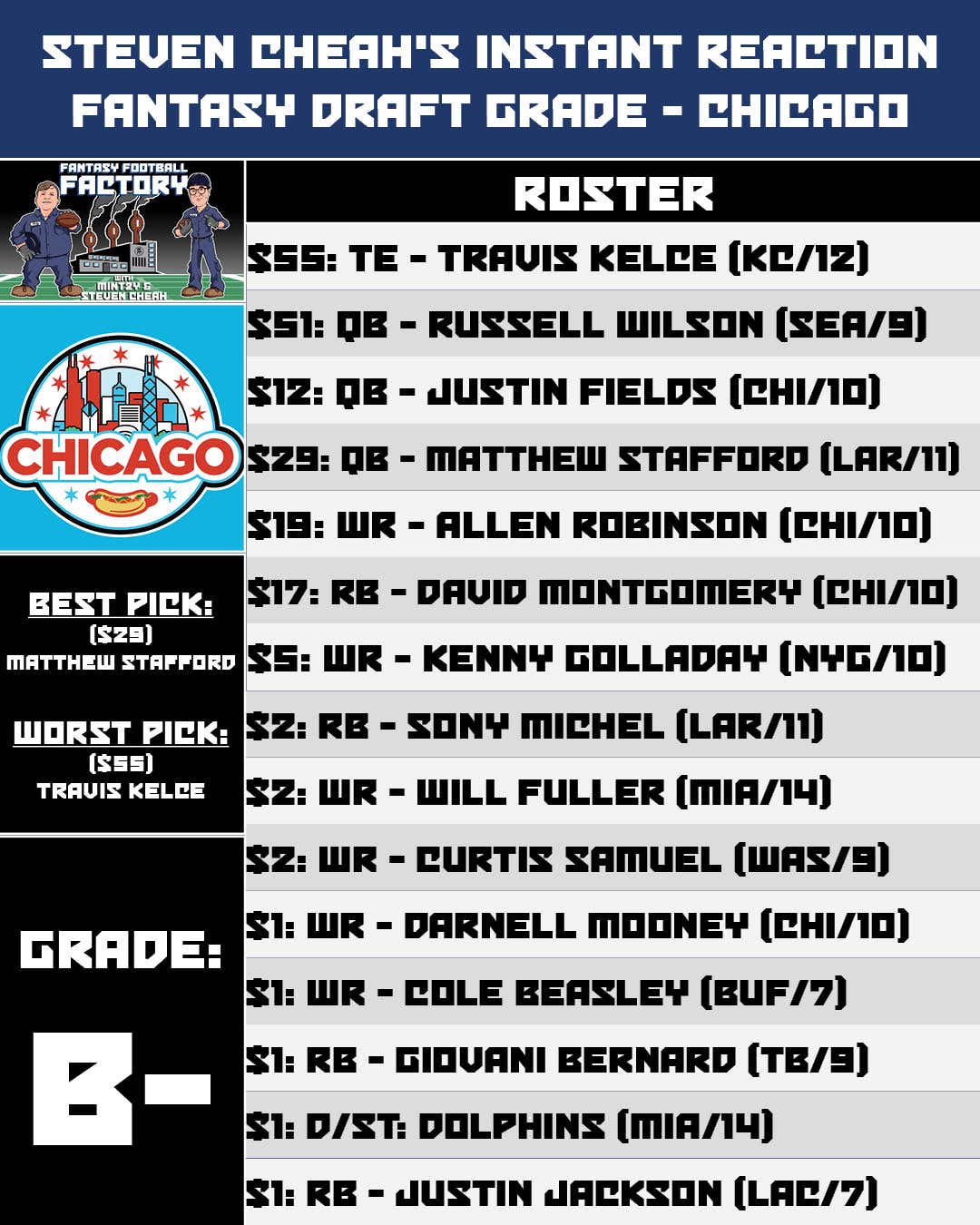 Chief was alone tonight as Carl had an interview in Chicago in the morning and rumor had it White Sox Dave was passed out at Declan's for reasons I cannot confirm. As far as their draft, I am a big advocate for drafting Travis Kelce early in fantasy drafts, but paying $55 for him when legit #1 WRs are going in the high $20s isn't a strategy I supported. He went for almost double Darren Waller ($28) which is absurd. They did rebound nicely by getting two stud QBs in Russell Wilson and Matthew Stafford. After drafting BOTH Bears WRs along with Justin Fields, there is a legit possibility in Weeks 9 and 11 (when Wilson and Stafford have byes) this team is starting Justin Fields, David Montgomery, Allen Robinson, and Darnell Mooney. There is only one ball fellas. By the way, your offense STINKS so loading up on their skill position players in a game where you score when they score doesn't feel like the best strategy. Their grade isn't lower as their QBs will keep them in it every week. 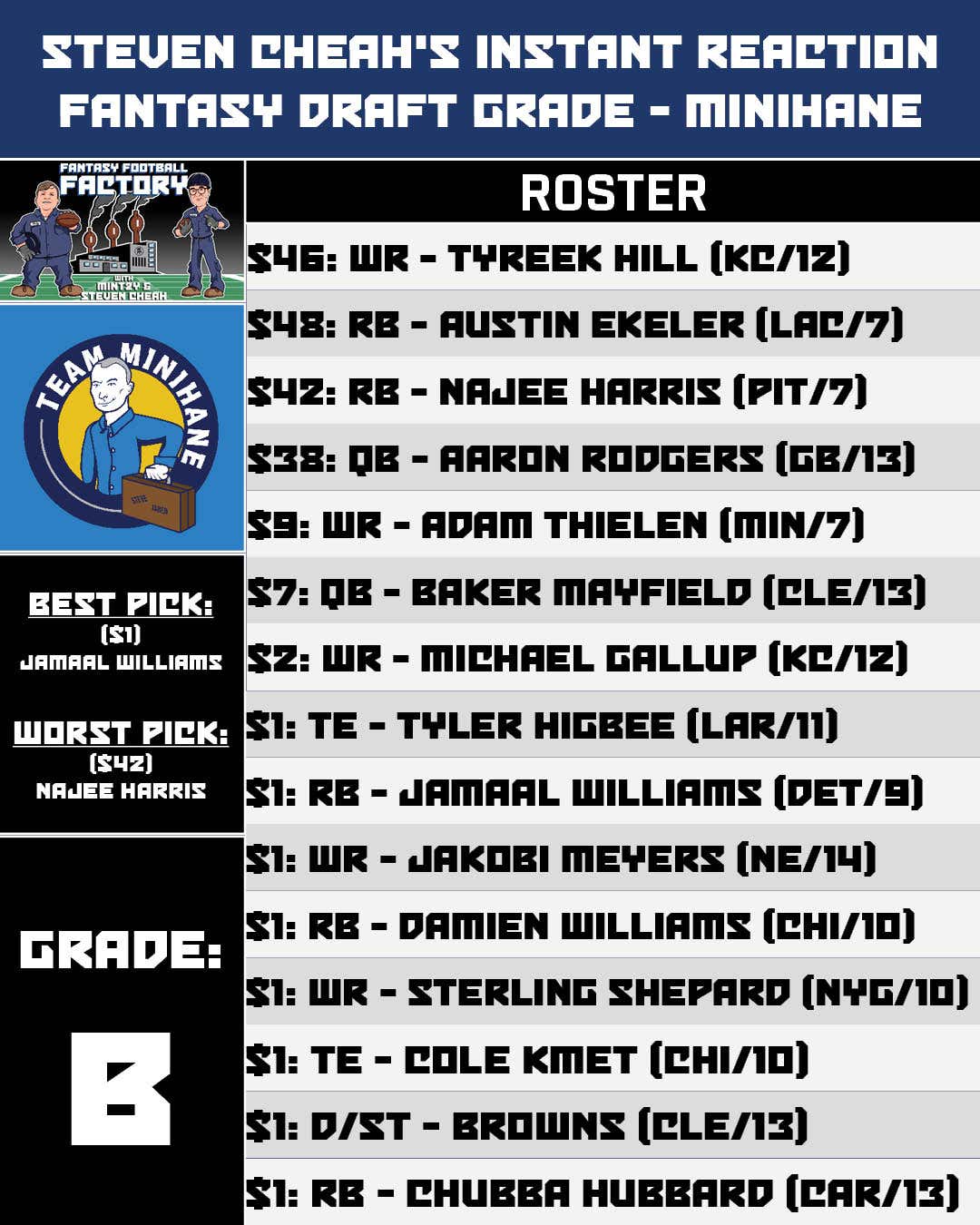 Unlike all of it's owners, this team has a very solid foundation. Tyreek Hill is my WR1 and Ekeler and Harris is a terrific combo, despite a slight overpay on Harris. Thielen and Gallup are solid starters and Jamaal Williams is a great value for depth at $1. Their bench could use some work and I don't see a ton of upside there, but this team has a lot of potential. 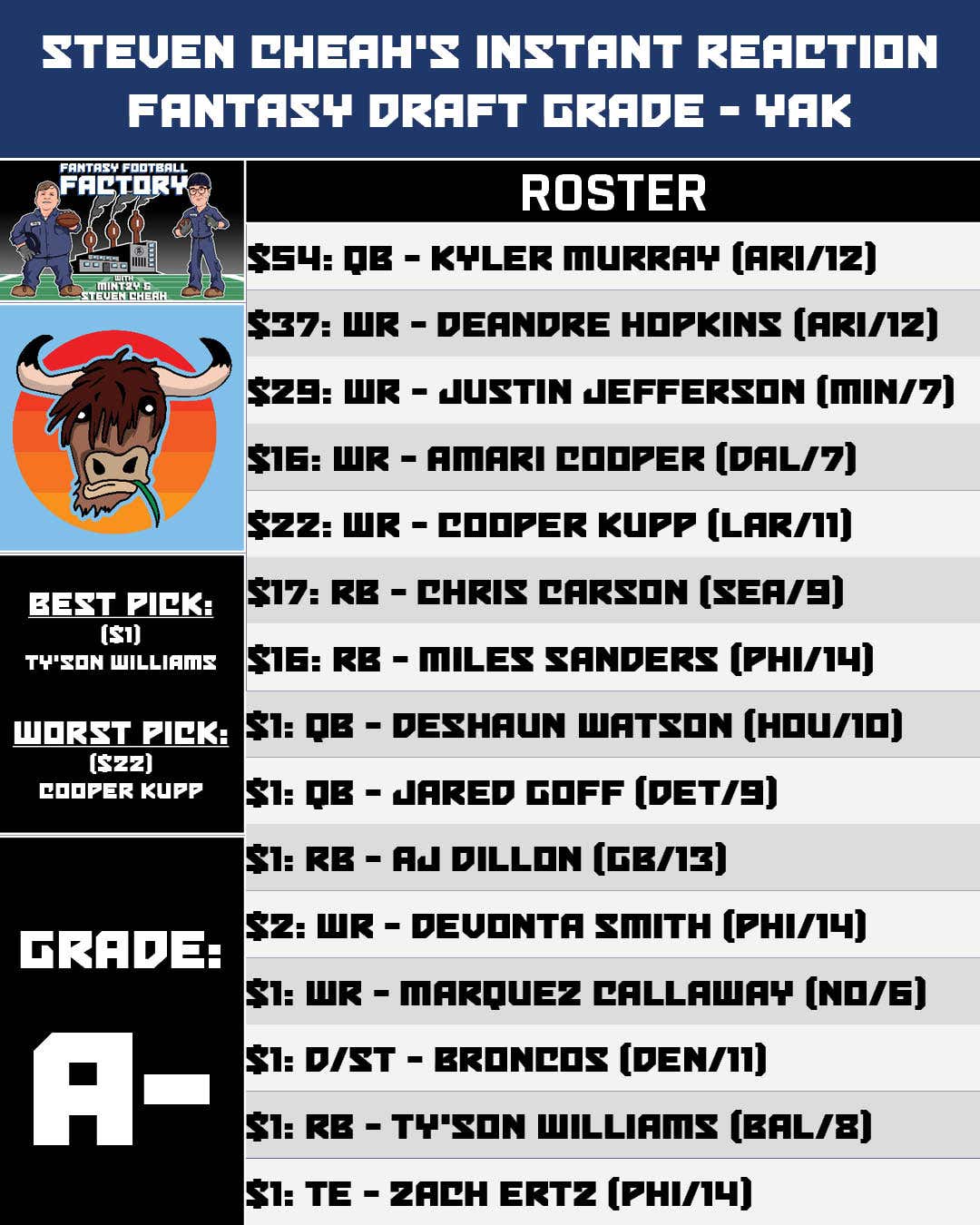 Kyler Murray will be our stallion and we decided to stack him with his #1 WR in Deandre Hopkins. Then we went on an absolute spending spree with low end WR1s/high end WR2s and the result is a LOADED WR group. However, the RBs are sub-par with Chris Carson and Miles Sanders as starters. Ty'Son Williams is a great boom or bust pick late. We bought way low on Zach Ertz who apparently has been having a great camp with Jalen Hurts per Rone. Deshaun Watson was certainly a worth gamble at $1 and Jared Goff is a useful rotational piece. The one flaw I'd point out is that going into the draft Rone & I were zeroed in on Cooper Kupp. We did overpay slightly for him, but I made the mistake of taking Amari Cooper directly before who will be our WR3. He was too good of a deal at $16 to pass up, so we're definitely WR heavy. This team has very good bones but will need to work through waivers to improve their depth in some areas. 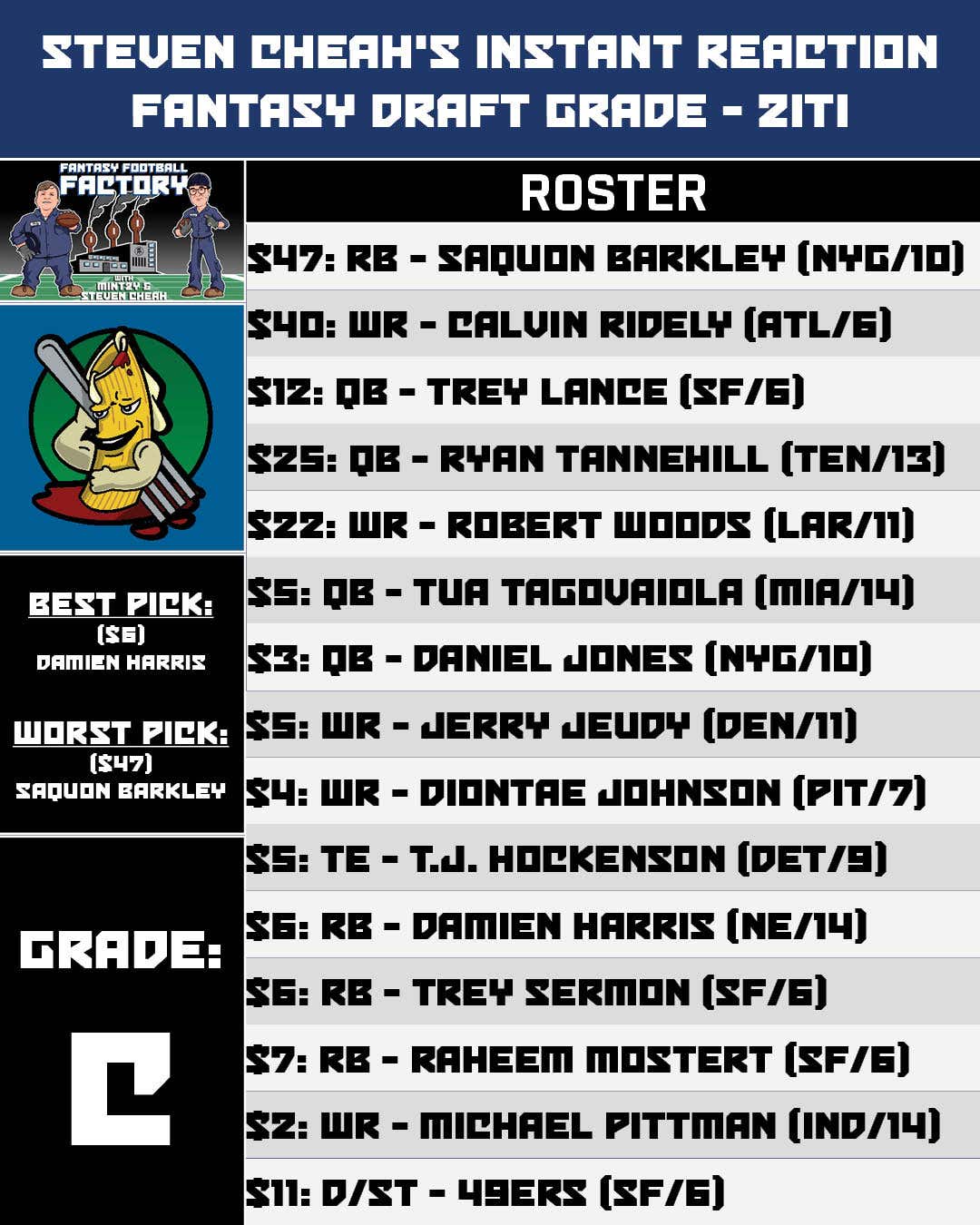 Saquon Barkley is tough to stomach at that price given his past injury history and his current status which does appear like he'll go for Week 1. But how much and how much will he be hampered this year? Calvin Ridley is a nice snag at $40, but their QBs are kind of scattered with Tannehill being QB1 and a mix of Tua, Trey Lance, and Daniel Jones being the Superflex. I do like the Damien Harris pick and it was smart to get both 49ers RBs. 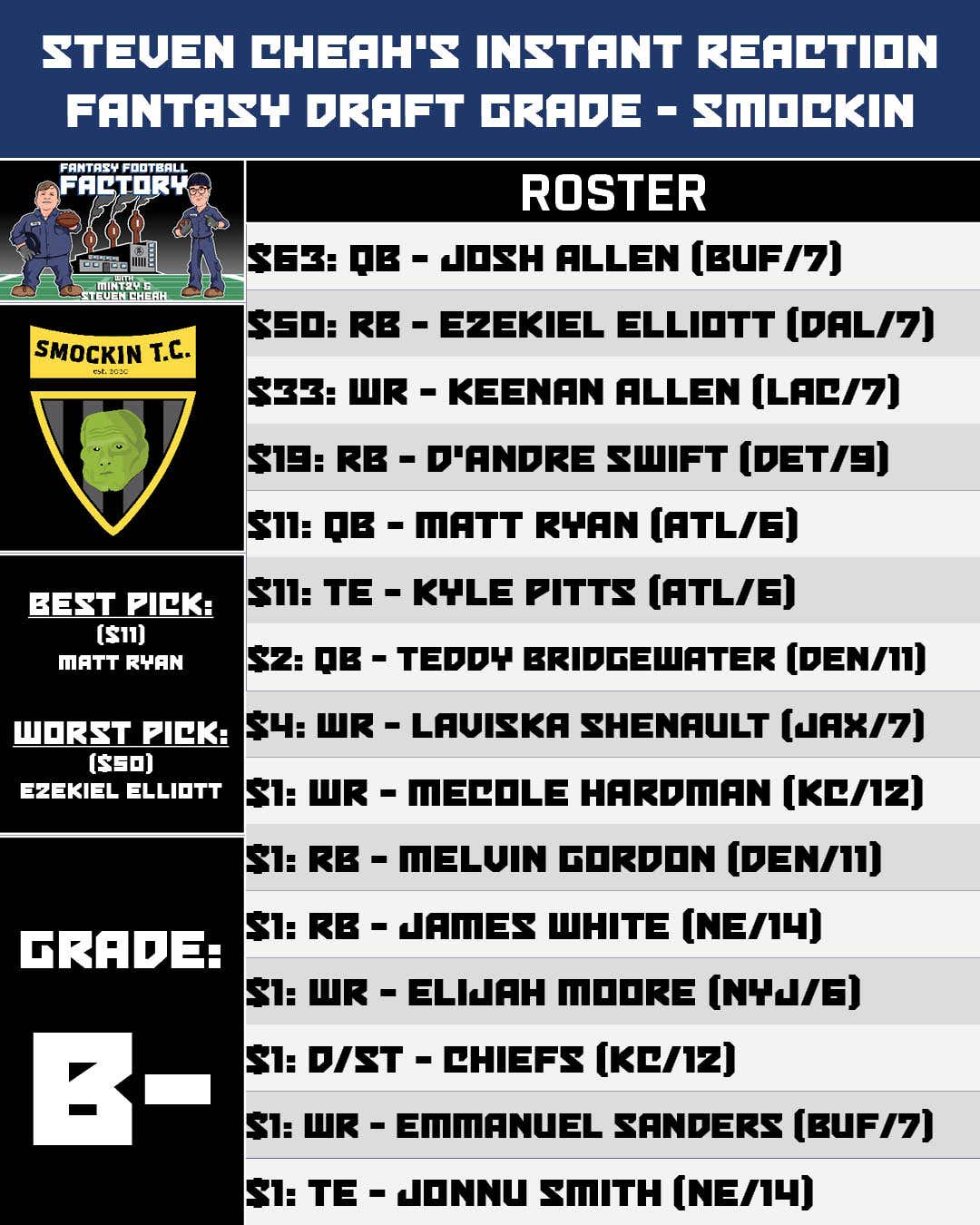 $50 on Zeke Elliott when he's had declining production for years was stunning to me. I'm skeptical on Kyle Pitts and if his production will match his potential year one, but at $11, that's a fair price. D'Andre Swift is a nice piece but he's already banged up. Keenan Allen is a low end WR1 and the rest of that position group is lacking, but let's see if Elijah Moore can breakout. 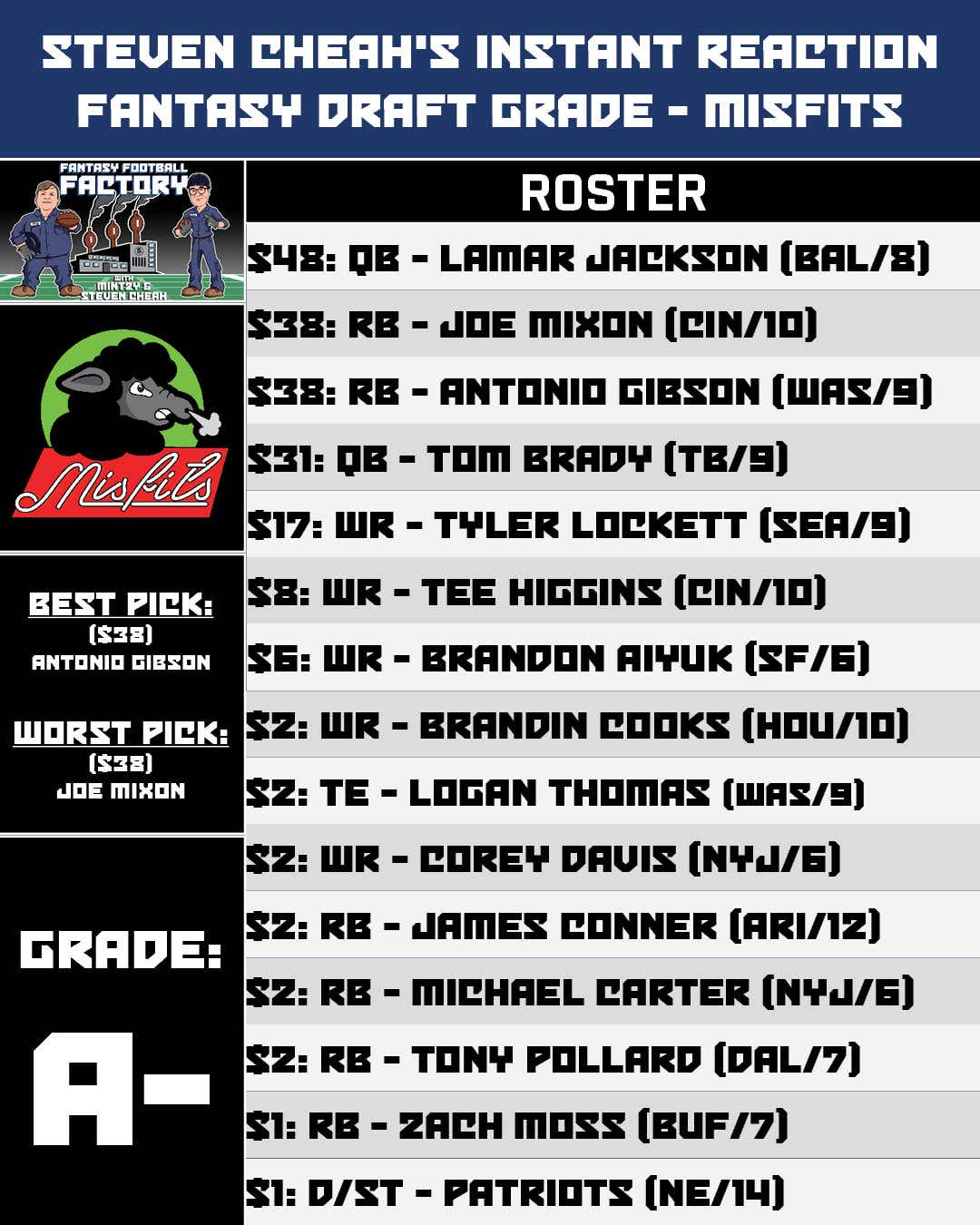 I love what Reags and Hank did tonight. They didn't blow a lot of money on a single player, but they are very balanced. Lamar Jackson and Tom Brady is an elite QB combo. Joe Mixon and Antonio Gibson is a good backfield too. I like Gibson's value a bit better than Mixon, and that was really my only gripe. I don't think Tyler Lockett isn't a true WR1 in fantasy this year, but he did finish overall WR8 last year. The bench has a lot of potential which pushed their grade up with Michael Carter, James Conner in a new situation, Tony Pollard, and Zack Moss. 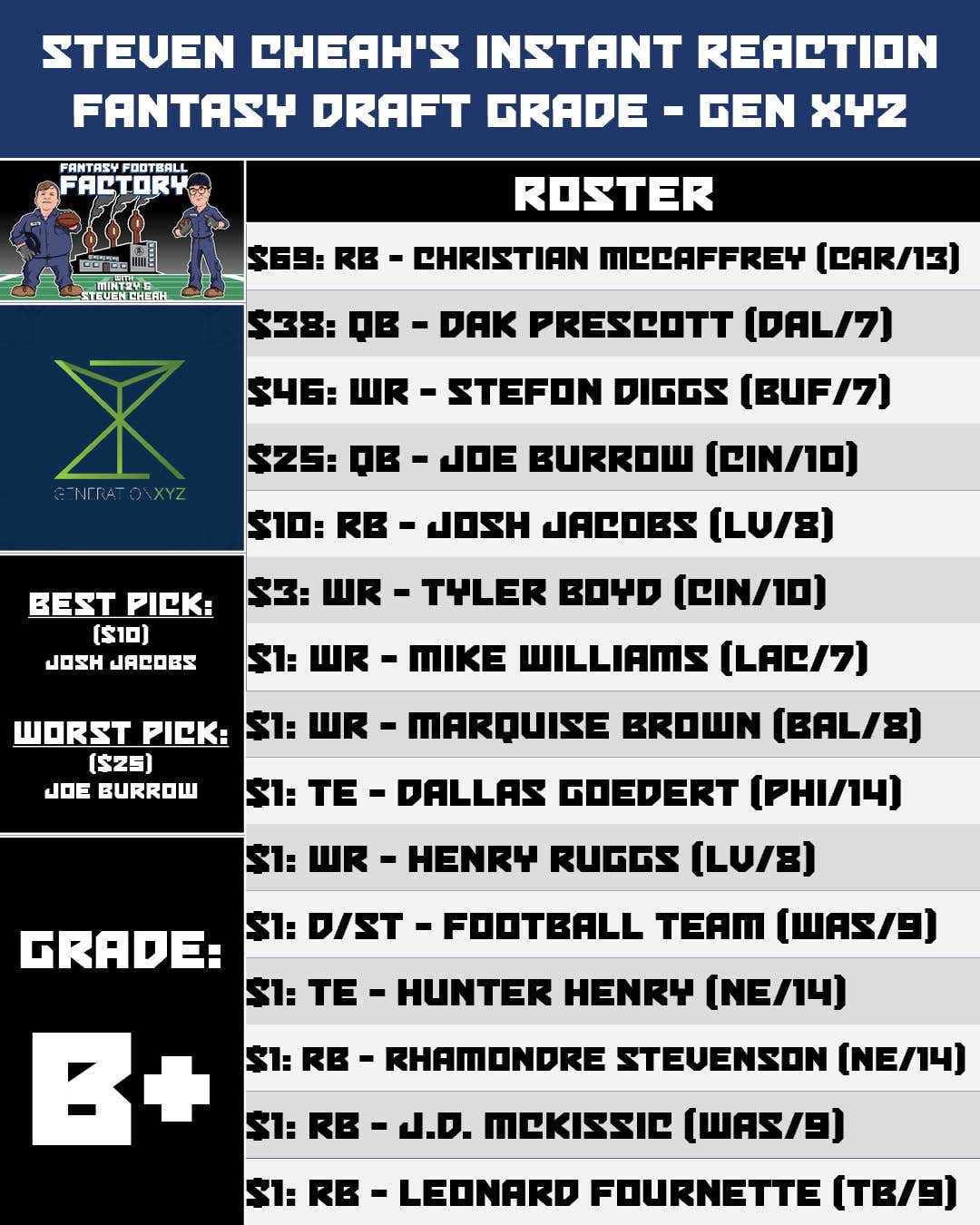 I respect the strategy here in swinging for the fences with Christian McCaffrey, Stefon Diggs, & Dak Prescott. I don't love the Joe Burrow value since he's not even 300 days into tearing his ACL and MCL. But they did get some good value in Josh Jacobs, Leonard Fournette, and Mike Williams. The Washington D/ST also plays exclusively NFC East teams in the fantasy playoffs, so watch out for Gen XYZ if they get in the dance! 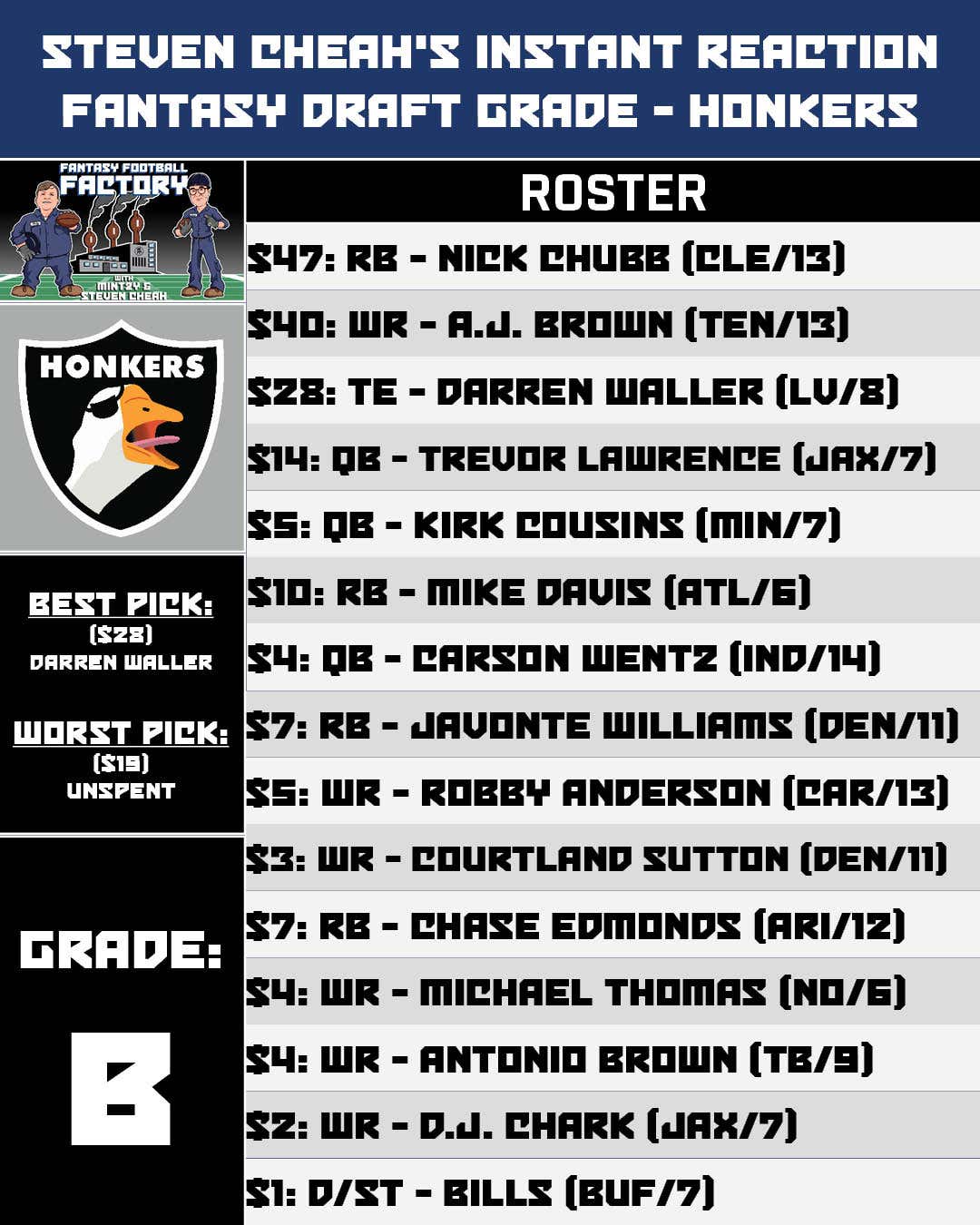 Mintzy was the seasoned veteran with salary cap drafts and fell victim to a classic budget based draft pitfall - don't be left with a lot of money and nobody to bid on. Once all the teams had max bids of $2, poor Mintzy had seemingly run out of guys to bid up. He left $19 on the table and could have converted that money into a better QB. For example, he could have traded in Trevor Lawrence for Matthew Stafford, but he just went home with money which. you can't do in these types of drafts. I do like what he did outside of the QB position with Darren Waller who is a stud and getting fantastic values on Javonte Williams, Mike Davis, Antonio Brown, and Robby Anderson. The defending Dozen champions have a very deep team and given Mintzy, Coley, & Robbie's propensity to search the waiver wire, it wouldn't surprise me to see them win a title in Fantasy at all. 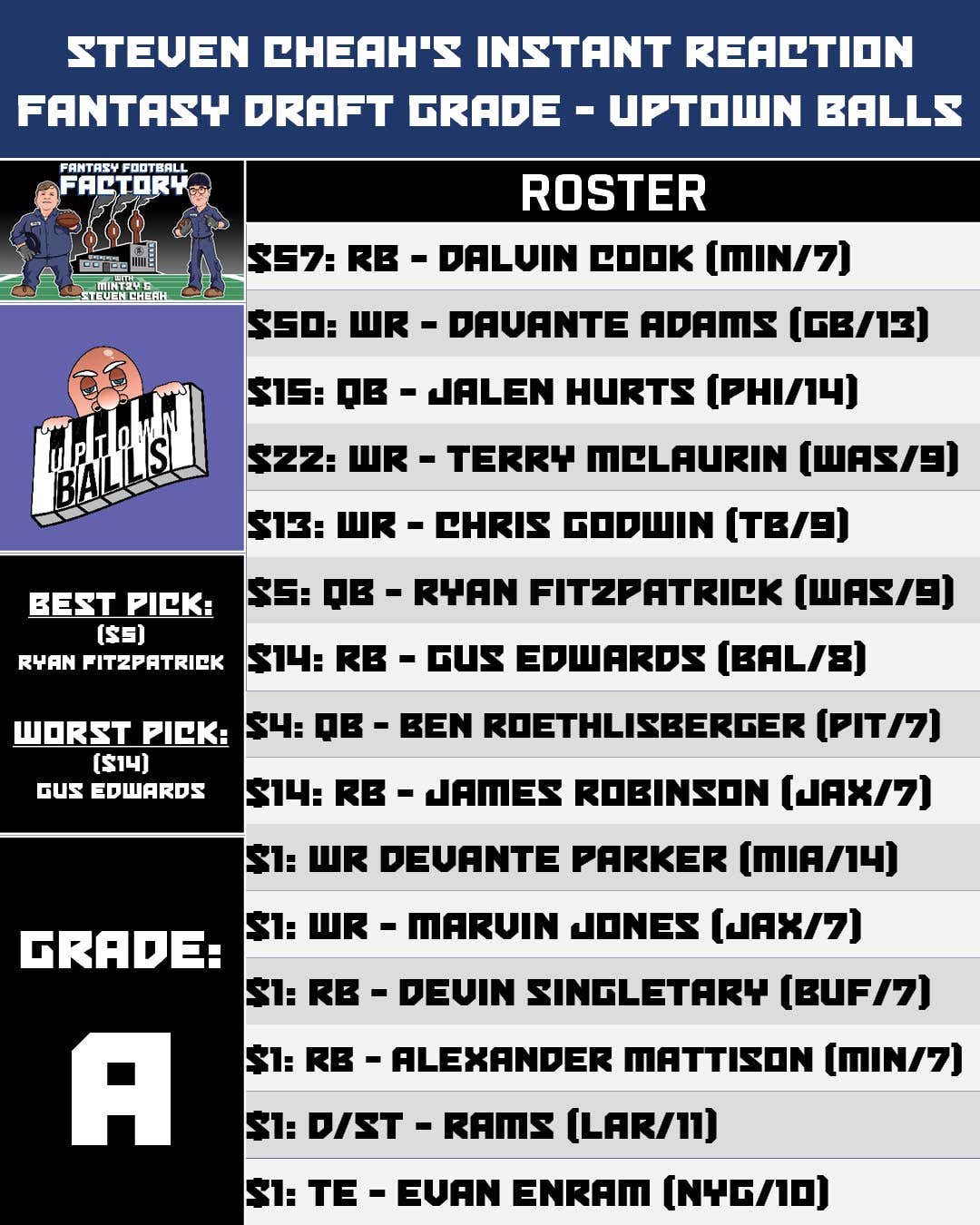 I love what Glenny and Tommy put together tonight. They pounced early and took a stud RB under value while everyone was still getting their feet wet. They came back with last year's WR1 in Davante Adams and paired him with Terry McLaurin and Chris Godwin which is outstanding. They also did a great job budgeting and got three quality fantasy QBs for $24 in Jalen Hurts, Ryan Fitzpatrick, and Big Ben. While I don't love the Gus Edwards pick, they redeemed themselves with James Robinson. These guys even picked up a handcuff to their RB1 in Alexander Mattison. Simply fantastic draft by some experienced fantasy players. Well done gentlemen - you've won Draft Day.

Here are the final grades all in one graphic - shoutout Richie Weber for putting these all together so quickly! 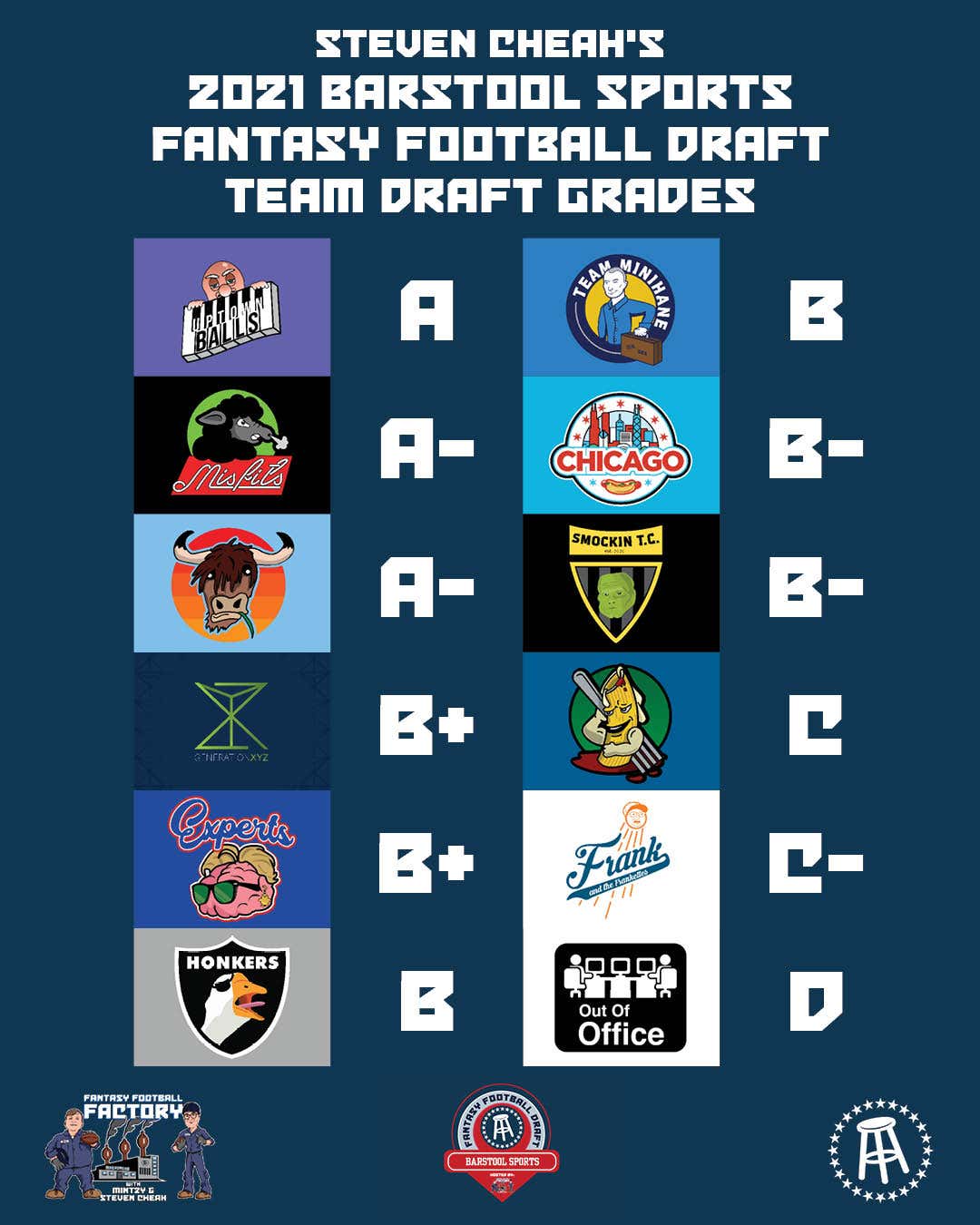 And be sure to check us out every Sunday on the Barstool Sportsbook YouTube Channel. Directly after the Pro Football Football Show, we're going to go live with a show we're calling Dear Mr. Fantasy. The goal will be to capitalize on the active/inactive window at 11:30 eastern and we're going to take your questions and help you navigate that early window for your team! So please subscribe to the channel and comment so we can help you out on Sundays!

Also, if you liked any of the shirts, Mintzy & I were wearing today, they're on sale now at the Barstool Store!

*also available in long sleeve for those cool fall days

What To Do With Josh Allen In Fantasy Today

DO NOT Start D'Andre Swift Today + Other Last Minute Advice To Win A Pivotal Fantasy Footb...

DK Metcalf Is Starting Today, But You Cannot Start Him In Fantasy With That Injury

Can You Trust Darrell Henderson In Fantasy Today With Cam Akers Out?

Alvin Kamara Is Going To Tear Up The Seahawks Again

What To Do In Fantasy With Alvin Kamara, JK Dobbins, Michael Pittman Jr. And Others Missin...

Did I Screw Up This Fantasy Auction Draft?