North Texas might be a better football team than they were last season but this schedule is doing them absolutely no favors. Northwestern State should be a win to start the season but their other three out of conference games are on the road at SMU, at Mizzou and at home against a really good Liberty team. They don‘t have a prayer in any of those three games and still have UAB, Marshall and UTSA in conference on their schedule that should be three more definite losses. That leaves them with needing to win three games out of LA Tech, at Rice, at Southern Miss, UTEP and at FIU. They have a really explosive offense that should give them a chance in some of these games if they get hot but like I said at the beginning the schedule is tough and it’s hard to find five wins on their schedule.

Considering I already gave out this pick I’ve already done research on Texas Tech and I love this over. I’m not sure why people are so down on TTU this year. They bring in Oregon transfer Tyler Shough at QB who played well last season (16 TD, 6 INT) and is a legit NFL draft pick. They also added WR Kaylon Geiger from Troy who’s had 141 catches for 1,625 and 8 TD in 19 games the last two seasons to go along with Erik Ezukanma who should form a solid pair of receivers for Shough to throw to. They have a solid O-Line with 84 career starts coming back and a talented/deep group of running backs with Thompso, Brooks and (Alabama transfer) Townsend. Matt Wells in his third season believes he has the best defense he‘s had in his tenure and bring back 8 starters from both sides of the ball. I think Texas Tech can easily win 6 games this season and for that reason I love this over.

Wisconsin has a legit shot to run the table in the regular season and should be favored in all 12 games. They don‘t have Ohio State, they get Penn State And Iowa at home and Norte Dame on a neutral site in Chicago. Graham Mertz getting covid last year after looking great in his first game really threw a wrench in the potential they had as a team but this has a chance to be the most explosive offenses Paul Chryst has had at Wisconsin. They‘ve never had a guy with Mertz throwing abilities at QB and they bring back all top 5 of their best receivers. You can always trust Wisconsin to have a great offensive line and Jalen Berger should be able to put together a good season as the lead back in what should be a committee. The Badgers defense should be incredibly strong again bring back their 7 of their 8 leader tacklers from last year and should be the best defensive unit in the Big Ten.

Notre Dame only returns three starters on offense from last season and has maybe one of the tougher five game stretches in college football this season when they go play Wisconsin on a neutral site, home vs Cincinnati, on the road at Virginia Tech, home vs USC and home vs North Carolina. I really feel there’s a strong chance they lose to Wisconsin and Cincinnati back to back that’s gonna make it really tough on them to win the rest of their games. Ian Book caught a lot of grief over the last couple years with people questioning how good he was or if he was really just a game manager, so naturally Notre Dame brought in who should be the face of game managing in college football in Jack Coan. I think we‘re gonna see a lot of Ian Book appreciation and apologists once they see what this offense looks like with Jack Coan at the helm and less weapons on offense. They have Kyren Williams back who is one of the best backs in the country but I just don’t think that’s gonna be enough to get this team to 10 wins.

Before you puke at the site of seeing UCONN and a football win total over lets get down to the nitty gritty of this thing. This total comes down to three games. Yale, Holy Cross and UMass. If they win those games this cashes and if they don’t this is a stone cold loser. I’d be shocked if they were even decently competitive in any of their other games. Plug your nose and play it. 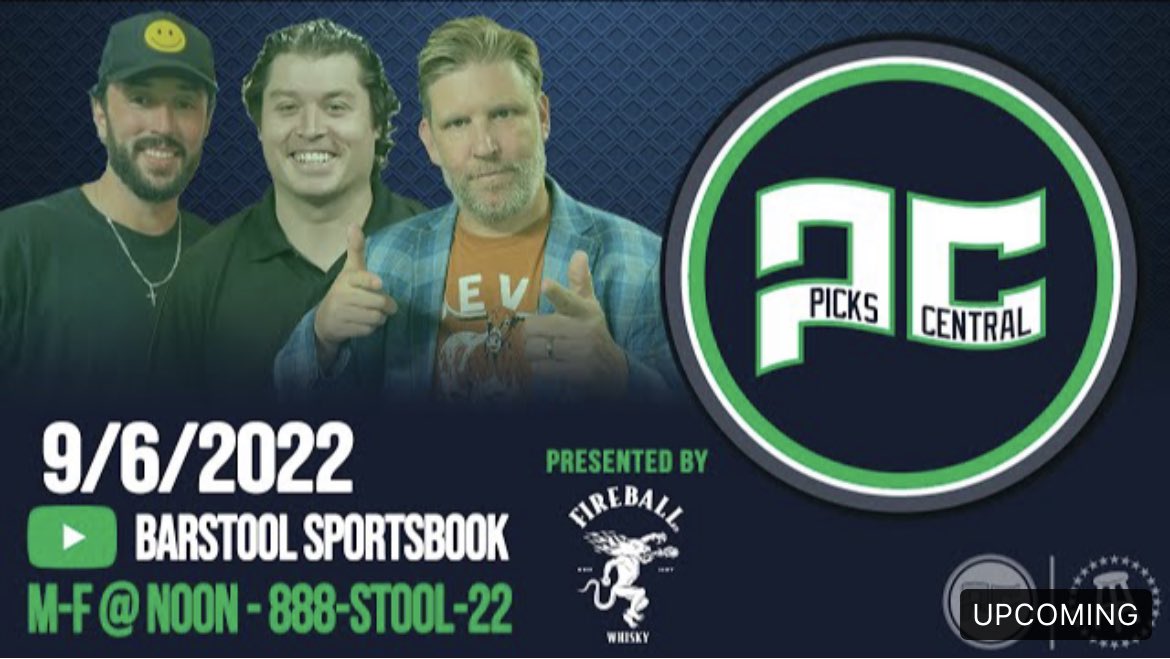 It's A Surprise Football Friday Episode of Picks Central With Big Ev and Eventually Ben Mi...

Talking Pujols' Chase For 700 and Deep Diving Into The College Football Slate on Today's P...

There's Drama Stirring At Barstool, Football Is Nearing, and It's The Dog Days of The MLB ...

New Hire Josh Pray Joins Us Along With Terrence Ross, and It's Win Total Wednesday on Pick...

We're Joined By The Newest Member of Our Production Team Ebo and Talking All Things Sports...

Mintzy's Out, The Yanks Are In A Slump, The Mets Are Surging, and Football Grows Closer By...

Taking Your Calls, Talking Inner Office Drama, and It's The Unofficial Start of Football S...

The MLB Trade Deadline Lived Up To The Hype, Juan Soto Is A Padre, and It's Once Again Win...

Billy Football Stops By To Talk Rico Drama, Mintzy Calls In About The Final Four in Omaha,...

Recapping Barstool Idol So Far and Diving Into Sports Hypotheticals on a Great Tuesday Edi...