With guys like Jake Paul taking up the sweet science, a new audience from a younger generation is being introduced to boxing for the first time.

Some purists hate it... They think YouTube vs TikTok makes a mockery of the sport.  But I'd like to think these circus productions are acting as a gateway drug to getting at least some of Paul's legion of fans hooked on real boxing going forward.

Admittedly, the Jake Paul "gateway drug" is not very strong because the actual boxing is pathetic and usually overshadowed by musical acts during the show or hat stealing antics prior to anyone stepping into the ring.

So if tonight's matchup between one of the Paul brothers and Floyd Mayweather is a watered-down CBD-like gateway drug for today's youth, then my gateway drug into the sport was tar fucking heroin from Jesus himself.

From 1980 through 1989, the was a rivalry between 4 world champions and 4 future Hall of Famers known as the “Four Kings”… Roberto Durán, the late Marvelous Marvin Hagler, Thomas “The Hitman” Hearns, and Sugar Ray Leonard.

For me, it was the Golden Age of boxing defined by the nine world championship fights between the 4 of them, and SHOWTIME is premiering a 4 part documentary series tomorrow night that gives an in-depth look into a time where champions fought champions on a regular basis. 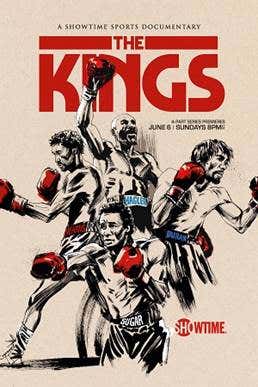 I got an advanced copy of the show and it is wonderful, so I invited Teddy Atlas on to chat about it since he is soooo much older than I am and has a better perspective on how boxing was back then.

Check out the interview above… Teddy was great to talk to… And check out part 1 of THE KINGS on SHOWTIME tomorrow at 8 PM.