Winds up that I not only grew up in the same neighborhood as former featherweight boxing world champion Heather Hardy, I grew up only 2 blocks away from her family in Gerritsen Beach, Brooklyn.

Heather and I didn't know each other as kids, mainly because I am a LOT older than her, but also because she was probably attractive as a youth whereas I perpetually looked like I was having an adverse reaction to shellfish.

Before I get into Heather and my potential fight, I will tell you that she is already making her highly anticipated return to the ring this Friday against Montreal's Jessica Camara (7-2)... It's the eight-round headliner of the debut event of 'Broadway Boxing Presents: Ladies Fight' promoted by DiBella Entertainment and streamed on UFC Fight Pass. 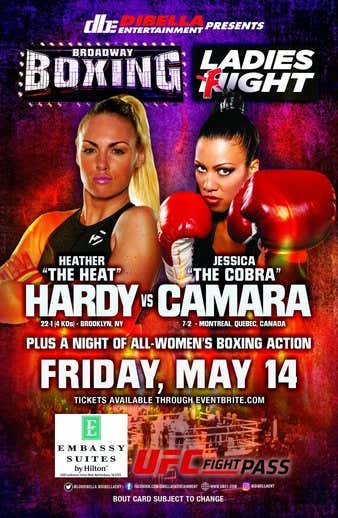 But back to my smoke with Hardy… In the attached interview, I casually ask Heather who has the best roast beef sandwich in Brooklyn and her answer is just so dead fucking wrong, I feel compelled to throw hands.

So look for Heather to take care of business tomorrow night against an outclassed Canadian opponent, but don't be surprised if the ensuing Rough N Rowdy matchup between her and me leaves her looking considerably worse for wear…