First off... Yesterday, I previewed the Jaime Munguia fight from last night and gave you a peek at the Oleksandr Usyk fight that starts sometime today after 2 PM EST.

In that preview, I said I expected Jaime to revert back into his old heavy-handed Mexican ways and then make quick work out of his opponent, Tureano Johnson.

There was a gentleman in the comments of that blog named decorum who took slight umbrage with my prediction saying, "Tureano Johnson is no joke. He only has one real loss as far as I’m concerned, to a prime Derevyanchenko. Mungia will probably win, but I’d be surprised if it was by early KO."

Somehow, we were both right.

Jaime did win after the ref stepped in to stop the fight in the sixth round after Tureano's lip was split open...

But, to my new boxing rabbi decorum's point (and as you can read from my Tweet), Johnson was just starting to gain momentum when his lip decided to do its best impression of Joaquin Phoenix.

SOOOO I am walking away from this fight a winner who is skeptical as to whether Munguia can hang with some of the bigger names in the middleweight division (Charlo, Andrade, GGG, maybe Canelo), but also excited to see more out of Tureano Johnson (once he has that replacement-pig-lip transplant).

Now, on to today's action…

Inoue has fought on undercards here in the states before, but Halloween will be the first time "The Monster" will invade American soil with the backing of a major promoter and network, and this fight will give my old friend, Hall of Famer Bob Arum, the chance to educate American fans as to just how dangerous and exciting this little monster can be.

I met Jason Moloney and his twin brother Andrew last week in Vegas, and Jason is certainly a very good 29-year-old Bantamweight fighter, but I think this is going to be the fight where Americans can really see just how dominating of a ring presence Jason's opponent can be.

Inoue is a big favorite (-900) and for good reason… The only concern for some is that Moloney has been a more active fighter… Monster has had a year-long layoff since his last fight.  But I think the 27-year-old Inoue needed that time off to heal up from the fractured orbital bone and broken nose he received in his Unanimous Decision win over Nonito Donaire (that fight is worth a watch and was voted the Ring Magazine Fight of the Year 2019).

Moloney might be able to drag this one out into the second half of the bout, but I ultimately like Inoue by KO.

And finally… Thanks to the handful of people who are sticking with these little previews I am throwing out, and there's one more Main Event to talk about.  And it's a good one. 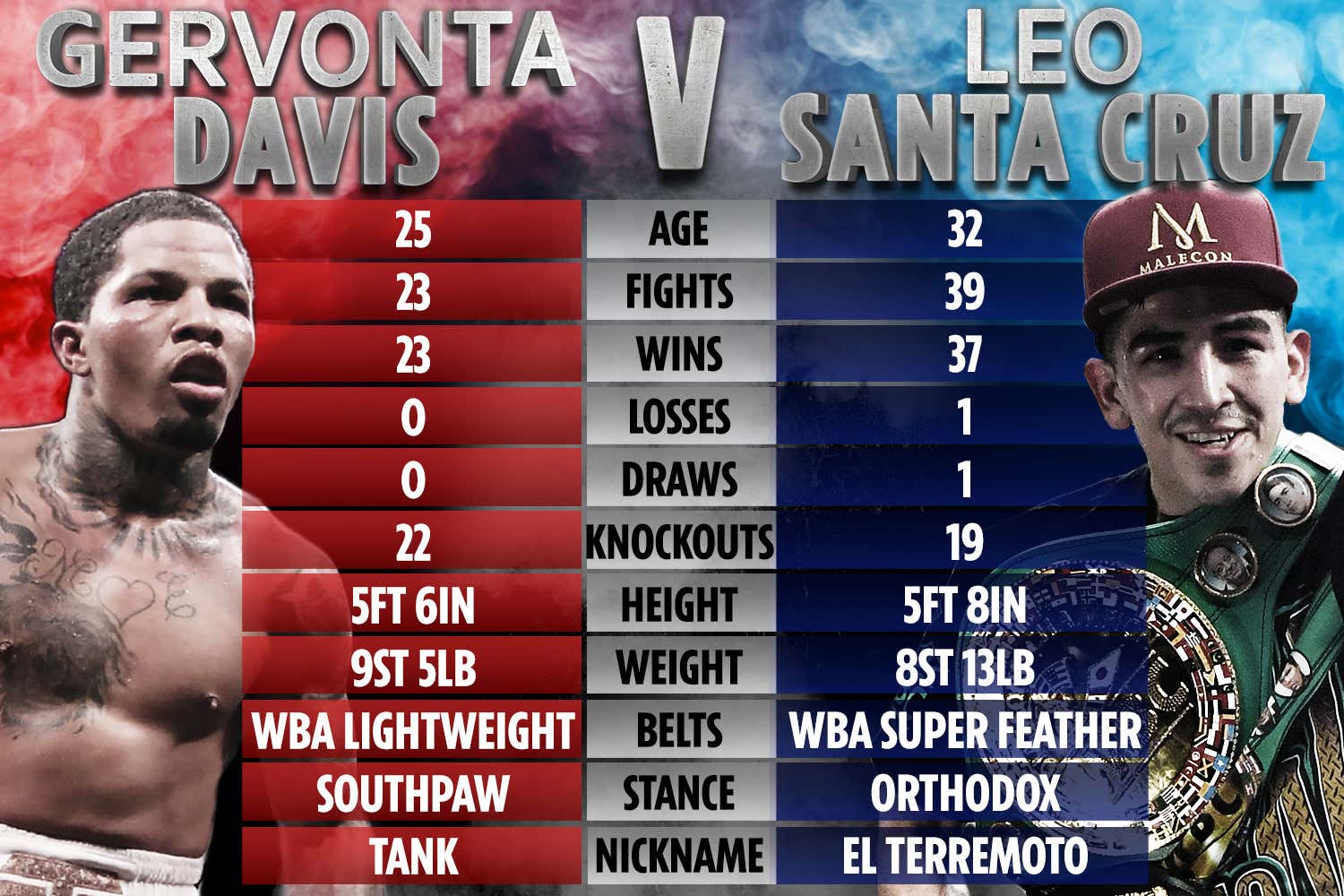 The fight is being contested at 130 pounds, but it will have both the 130 and 135-pound titles on the line… The last time I saw something like this was when Sugar Ray Leonard fought Donny Lalonde for both the super middleweight and light heavyweight belts waaaaaaay back in 1988.

One of the big hurdles for Davis in the past has been making weight, but last night stepped onto the scale in San Antonio and weighed in at a perfectly lean 129¾ pounds.

I mention San Antonio because that is another intriguing fact about this fight… These guys are fighting in the Alamodome, and there will be a few thousand fans in attendance to watch the event - making it the first major fight with such an audience in the United States.  This nuance shouldn't benefit one fighter more than another, but I mention it because I am a little tired of watching bubble fights with piped-in crowd noise.

Here's the skinny on the matchup:

Both men are headlining a PPV event for the first time in their careers.

That sentence alone explains why Tank is such a heavy favorite, and the fact that Gervonta has Mayweather in his promotional corner leads me to believe his defense has only gotten better.

However, after making weight, it’s unclear how much, if at all, the training regimen to suck down to 130 pounds will affect Davis’s power.  Plus, Leo is a four-division champion who has never been knocked out and has vowed to go the distance in what he has said will be the most difficult fight of his career.

So here's how I see it this going down on Halloween night:

Whereas Tank's power is unquestioned (particularly when he sets his feet)…

And power vs pressure usually equals fireworks.  So if this bout takes place in the center of the ring, I think Tank should throw enough to end this in the later rounds… That would be a treat.

Conversely, the trick would come if Santa Cruz changes the complexion of this fight completely and manages to back up and play defense for 12.  If that happens, I could certainly see him landing more punches and possibly wear-out an exhausted Davis as they go to the cards.

I'm betting on the former, so I will take Gervonta Davis in a mid-to-late round stoppage.

Enjoy the fights, everyone.