This week's podcast is on Tycho Brahe, the Danish nobleman and astronomer, but we took a left turn into the topic of strange and unfortunate deaths people may have forgotten about:

Sonny Bono hit a tree on January 5, 1998 while skiing in Lake Tahoe. Coincidentally, Michael Kennedy hit a tree while playing football on skis in Aspen, Colorado on December 31, 1997.

The Kennedy family is definitely cursed. Maybe it's Karma?

David Carradine, who portrayed Kwai Chang Caine in the hit series Kung Fu or Bill in Kill Bill, was found dead in a Bangkok hotel in 2009. Hotel staff found him sitting naked with a noose around his neck, tied to a bar in one of the closets.

Hans Staininger was a high-ranking government official in the 1500s, in the area of Europe that is now Austria. He died in 1567 after tripping on his own beard and breaking his neck. 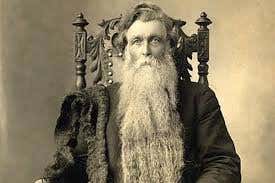 Staininger's beard was 4.5 feet long and usually kept hidden inside a pouch.

Author Sherwood Anderson was on a cruise ship with his wife in 1941, and complained of abdominal pains. The couple disembarked in Panama, where Anderson entered a hospital and died a few days later. His autopsy found that infection developed after Anderson accidentally swallowed a toothpick, which punctured his internal organs. The toothpick was accidentally consumed while Anderson was eating Hors d'oeuvre.

Harry Houdini commonly performed a trick which involved inviting an audience member on stage to punch him in the stomach. Houdini simply tensed his stomach muscles to absorb the blow. But, while talking to some young fans in October of 1926, one of them asked to act out the famous punching trick — and then punched Houdini before he was ready, while his body was in an unusual position because he was nursing a broken ankle. Houdini's health deteriorated immediately, and he died of appendicitis several days later. Historians now say that he had an already inflamed appendix, which was made far worse by the punch.

Tennessee Williams was 71-year-old man when he was found dead in a New York City hotel room. The official coroner's report claimed that Williams had choked to death on the cap from a bottle of eye drops, as reported in the New York Times. He’d gotten into the habit of popping the cap between his two front teeth as he tipped his head back to administer the drops — this time he had swallowed the cap by mistake.

Alfalfa's real name was Carl Switzer, who was murdered in 1959 at the age of 31. After Little rascals fame and as an adult, Switzer appeared in minor roles in films, and also became a dog breeder. He was shot to death in the groin on January 21, 1959 - over an argument involving $50.00 that Carl felt he was owed for training a hunting dog. The man who shot him, Moses Samuel Stiltz, was found not guilty of murder as the shooting took place at Moses’ house, and Switzer was considered a trespasser at the time of the shooting. To make matters worse, Carl was killed on the same day that legendary filmmaker Cecil B. DeMille died, and his death received only minor attention in the media.

*Note: Carl Switzer was the ORIGINAL character of Alfalfa, not to be confused with Bug Hall, who starred in the 1994 film "Little Rascals." Bug is only 35-yrs old and is alive and well - as far as I know.

If you missed this week's podcast, catch up:

We also touched on the last Presidential debate (which was an absolute shit show) and take you through some famous debate moments in history.