I was born a Gunner. You can thank my mum for that.

My whole family was Tottenham, but my mum loved Ian Wright. And thank God she did! I never really knew my father- it was always my mum, my nan and my family. Life wasn’t always easy, but we had each other. Growing up, I never knew what I wanted in life. All I knew, is that I loved Arsenal. Then I had Trey and Carter, and all I wanted, was to give them a life that was better than mine.

Rewind 5 years… I was just another Gunner. I was working at the betting shop, finding ways to make ends meet. I always knew there was more. Then I got on AFTV. BIG UP ROBBIE!!! AFTV gave the fans a voice. It don't matter where your from, what you do for work, who you worship, the colour of your skin… it don’t matter. If you loved Arsenal, then you had a voice.

Some people think us AFTV lot don’t love Arsenal, but that ain’t the truth. Some people mistake honesty for negativity. But we love the club more than the pundits and the media, we ARE THE FANS. We buy the tickets, we go to the matches, we stick by the club, for better or worse.

This YouTube ting has taken me around the world. When I came to the US last summer for preseason, I felt the love. Not just for me and AFTV, but for Arsenal, and for football. The fans were lit. Fam, I couldn’t get enough. Vegas, Denver, LA, Atlanta, DC, Charlotte. Even the MLS games. The game is growing there. I knew one day, I wanted to move there. Didn't know when, didn’t know how, but I saw something. I just didn't know it would come this fast or for who.

At AFTV, we are by the fans, for the fans. What more could I ask for? As soon as I got linked with my american agent, he said Troopz, you were made for Barstool. I said nah, Barstool was made for me! He told me how fast they are growing, and that this move could change my life. I could have my own podcast, and have a platform to talk about more than just football. Don’t get it twisted- there’s gonna be ALOT of football. But there’s more to Troopz than that.

Now to all the fans, here is what you are getting with Troopz x Barstool.

Uncensored Troopz- every single week. YOU ALREADY FUCKIN KNOW! I am gonna bring the best Arsenal and football content that the world has ever seen.

Back Again with Troopz - every Tuesday, starting September 15. All the Arsenal shit you need. Premier League, Champions League, and even some MLS. 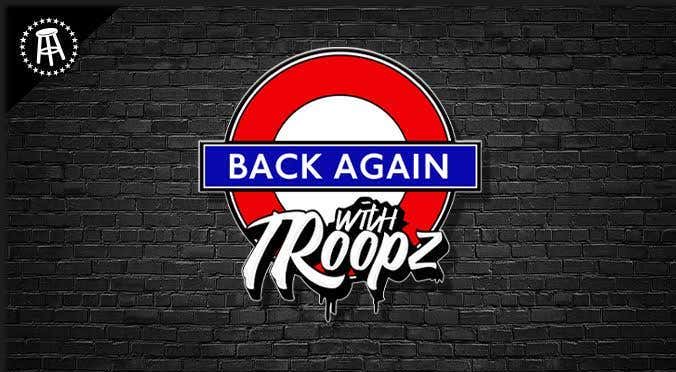 I am gonna be having Barstool watch parties all around the country, hitting all the biggest Arsenal fan bases from coast to coast. And Troopz TV? That is gonna be on Barstool now. More content that you haven't seen before. Barstool is launching their betting app- your boy used to work in a betting shop. Barstool has gaming- you have already seen your boy in FIFA. Its all going down.

To all my AFTV fans who won’t like that I am leaving- don't worry. I will put on for AFTV till the day I die. Robbie- that’s family. The rest of you- you know who you are. I am doing this for all of us. Guess what? There is talent in the fan tv community- real talent.

Get ready, NYC. Troopz is takin over.

Back Again with Troopz

LEEDS BATTER CHELSEA, UTD RISE FROM THE DEAD & THE ARSENAL GET ANOTHER W!! BACK AGAIN EP 1...

THE SMITH SIGNS, VARANE TO UTD & RAMSDALE FOR £40M LOL

Who Are The Best Premiere League Players Of All Time? Back Again Episode 47

Get Ready, NYC — Troopz Is Taking Over