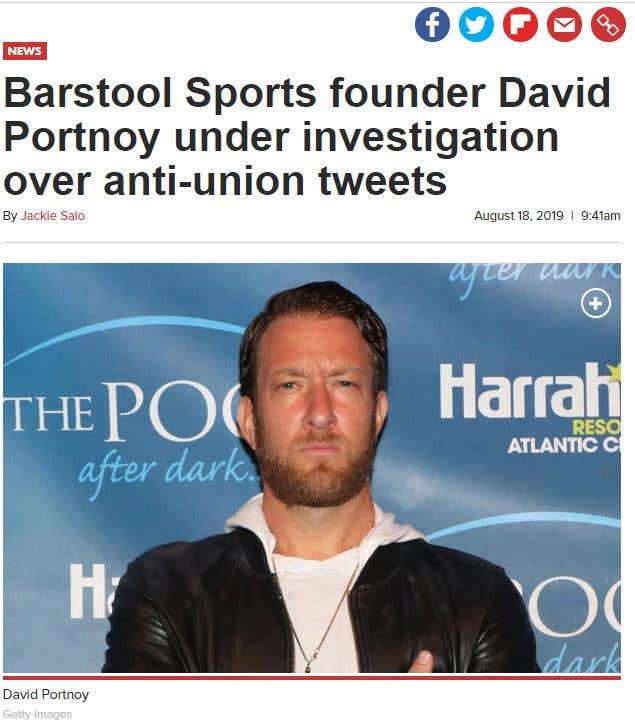 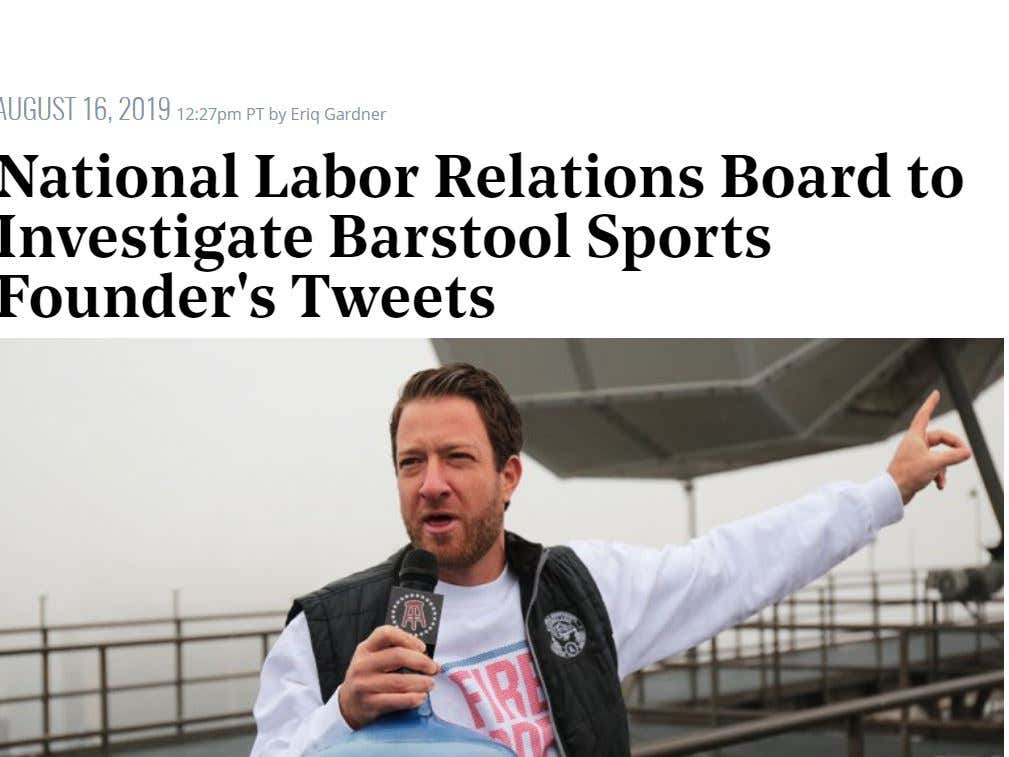 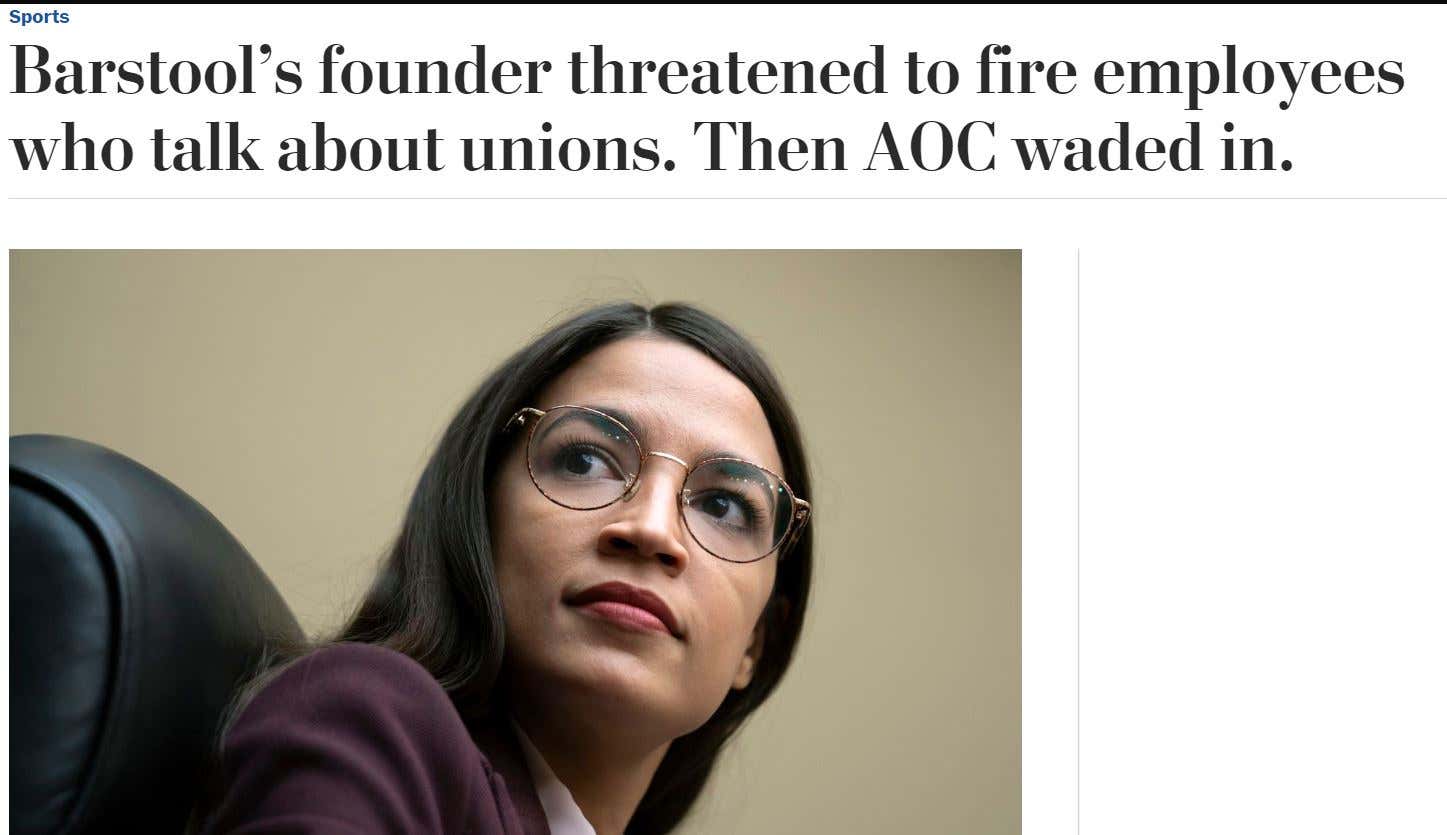 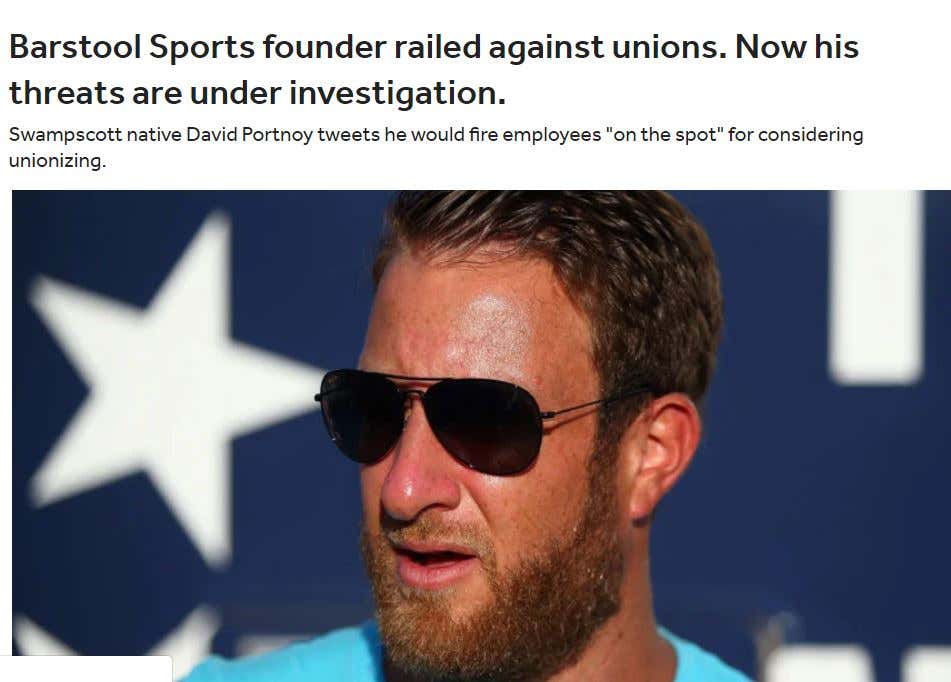 So in case you’ve been living in a cave my Barstool Sports Anti Union stance blew up into a huge story this past week. Everywhere from the Boston Globe to the Washington Post to the NY Post To the Daily Mail covering it. AOC weighed in. Donald Trump Jr weighed in. Some old bastard from California is suing me for an apology. On and on it went.

Now anybody who is remotely familiar with Barstool or me knows this entire thing started as a very clear joke. I reposted an article from 2015 throwing shade at Gawker/Deadspin and their merry band of nitwits for unionizing because they all suck at their jobs. And yes I firmly believe that Barstool Sports and blogging companies like ours don’t need unions because talent protects you. I was also very clear from the beginning I was only talking about Barstool Sports. I wasn’t talking about any type of Union except ours. Not to mention the fact we already have great benefits, people love working here, there is no talk of Unions and I wouldn’t give a fuck if there was a Union. I’d just laugh at it. I’ve fired like 2 people in 15 years. I am a human Union. People attach themselves to me like Algae and are set for life.

Well enter the Blue Checkmark Brigade. A group of pathetic swarmy losers so desperate to bring me down there is no level they won’t stoop to. There is no story they won’t twist and misrepresent for their own gain. So when this piece of shit tweeted out a message to all my employees asking  them to DM him I decided I’d have some fun with this loser.

Not surprisingly the NFC (No Fun Club) were quick to demand I go to prison for this. That I was literally threatening my employees. Who cares that Big Cat DM’d this guy 5 seconds after I tweeted at him. 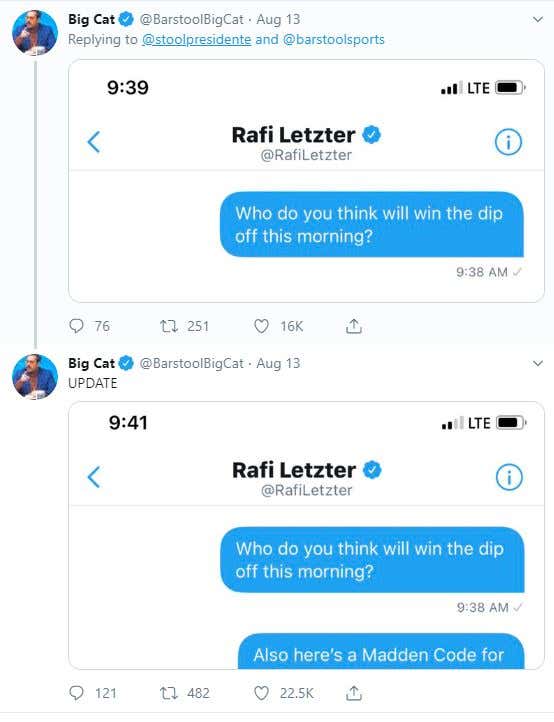 Who cares that our entire office was in on the joke and making fun of it.

Nope let’s ignore facts and make it seem like I broke the law.  That I actually give a fuck if our guys tried to Unionize.  That’s when O’CRAZIO Cortez jumped into the mix clearly trying to score some quick political points on something she literally knew nothing about. 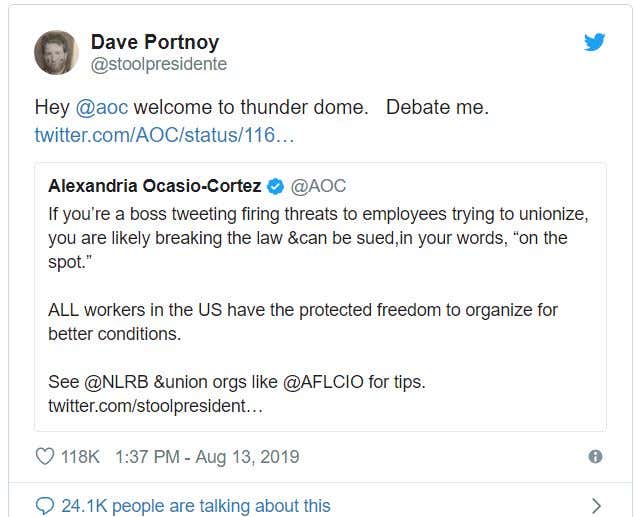 It’s everything that’s wrong with all politicians. And to clarify I don’t care if it was a Democrat or Republican who came at me here. For anybody who spent 2 seconds researching this story or my twitter history you’d realize Barstool Sports is a comedy site and I wasn’t serious.  O’CRAZIO made a fool out of herself and should have apologized.  Instead she literally sent out an email requesting donations because of it acting like she was some hero.

Now fast forward to last week. Some old bastard decides he’s going to issue a formal complaint with the National Labor Board trying to get me to issue a sincere apology.  Why is he doing this? Because he doesn’t like me. His words not mine.  Not because I did anything wrong. He just thinks I’m an idiot.  This is the geezer in question. 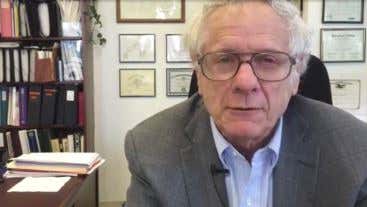 Washpo – “In an interview with The Washington Post,  David Rosenfeld said he filed the charges “just to f–k with these idiots.”Writing on behalf of his Committee to Preserve the Religious Right to Organize, Rosenfeld alleges in the complaint that Barstool, “through its crazed president, Dave Portnoy, has threatened to discipline employees on account of Union and/or protected activity. The Charging Party seeks as relief that Mr. Portnoy be required to tweet and otherwise publicize his severe and sincere apology and to post the appropriate Notice on the public website.”

Yup the 108 year old walking dead guy who probably belongs in a nursing home is wasting taxpayer dollars trying to get me to issue a formal apology for something I will never apologize for because I did nothing wrong. But if you read the headlines all week you’d think I’m on death row.

All this over what is clearly a joke. Welcome to Bananaland. And yes thank you to all the haters getting me close to a million followers on twitter and giving us our biggest traffic week ever. I’ll let the history books decide whether I’m a criminal or a mad genius.

The Barstool Sports Advisors Are Back For NFL Week 13

I Shot Predators with Tracers!

Are You Still a Man if You Can't Throw a Football?

Trying To Carry Range Balls 280 With A Stealth