Warning – Going to get a little sentimental for a second here.

Welp, I don’t know exactly how we got here but we’re here. It’s pretty crazy that what started as a little joke on the blog ended up with a podcast with ARod interviewing the likes of Kobe Bryant. But if you boil it down to its simplest form, this ride is exactly why Barstool is the greatest company in the world and why we have the best fans on the internet. It was a slow play but it worked out in more content for you guys that I think you’ll enjoy and at the end of the day that’s my goal every single day that I have this job. To entertain you and find new ways to make you laugh. So the backstory and how this was a team effort from everyone who works at Barstool to you, yes you, reading this blog right now, goes as follows. 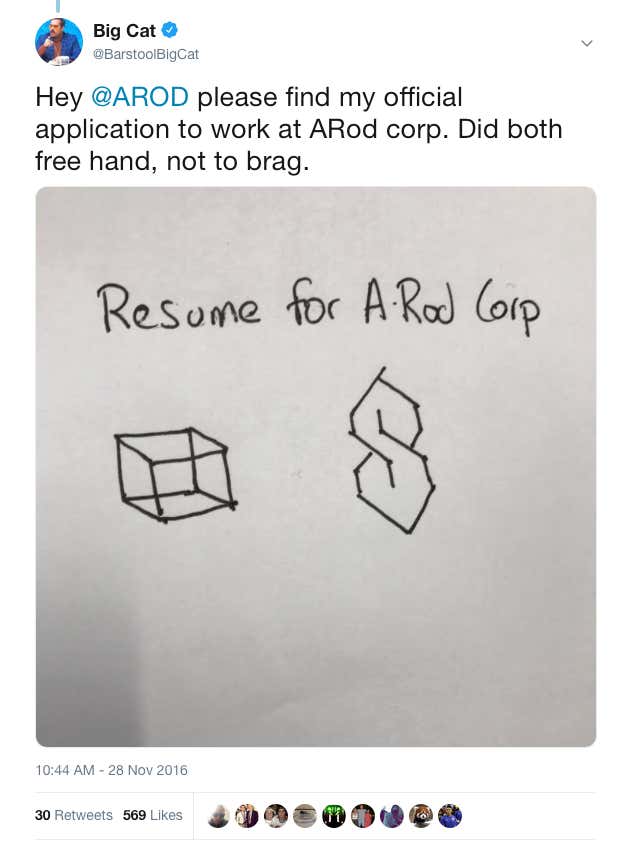 Obviously everyone knows I decided I was going to work for ARod Corp by simply tweeting it a few years ago. The joke that evolved from a simple proclamation evolved over time into a real partnership with a ton of people along the way. Caleb was an enormous help in introducing me to his friend Brian Axelrod who got me connected with ARod and his team including Ron Berkowitz and his CEO Jeff. We met a few times over the last year, hashing this entire thing out. ARod is a ton of fun to be around and the one thing that always strikes me about him is his intellectual curiosity. He always wants to learn and do new things, so to be around someone like that, with an infectious personality always felt like a no brainer. I went to dinners and lunches and did my best to get to a point where ARod and his team trusted me and a project like this. Also shout out Joe Buck for doing me a major solid this past summer at the MLB All Star Game

Throughout all of it I had the support of Erika and Dave to try something a little different, which I think is very rare in the media world today. To have bosses that give me the complete freedom to pursue projects that will hopefully help the whole company down the line. I guarantee you there is no media outlet that lets the talent take risks and try new things like Erika and Dave do.  PFT, Hank, and Liam always had my back, and always told me this was something that I should do, which is even rarer for people in this type of business. Pardon My Take is my passion and the most fun I’ve ever had doing this job, so to have the 3 of them give me their full support and know that this won’t interfere with what we do and the goals we have is insane. You all know how exceptionally talented PFT is and I’m lucky to work with him every single day, he pushes me to be funnier and smarter on a daily basis, but it’s more than just the podcast, it’s the friendship, chemistry, and teamwork that sets our relationship apart in my eyes. And Hank was the only person I wanted to produce this. His ability to put me in the right spot to succeed time and time again is something I can’t really put into words. It’s a trust that has been built up over years and it isn’t lost on me how important it has been for my career. There was a moment when we were taping a video in LA that ARod asked me how it would come together and I just said to him, don’t worry, hank’s got it, and that was that, because that is the trust we have in each other. They’re the best teammates and podcast crew I could ever ask for. And that goes for really everyone at Barstool. From the outside it may seem like all we do is fight over trivial matters and roast each other on radio, but at the end of the day Barstool is filled with a group of people that are all rooting for each other and supporting each other as we climb up this wild mountain. KFC, Coley, Rone, Feits, Kmarko, Tommy, and a bunch of other people helped me prep for interviews as they came up, but again, this is a wholly unique workplace where even if it may not seem like it at times, we all have each others back in a big way.

And then comes you guys, the stoolies. This may sound like bullshit or pandering but its 100% the truth. None of this would have been possible without you guys. When I was joking with ARod on twitter about working for The Corp, you guys were asking him in person why I was suspended or if I really work for him. That’s why I love Barstool. That’s what people don’t understand. The running jokes that we create and set free to our audience. The constant dialogue and story lines that we all share, that to me is the true barstool difference. ARod didn’t really start noticing me until it was all of you bringing me up whenever he had an appearance or was doing FOX broadcasts or whatever it may be. The amount of times I’d get tweets or messages saying “I saw ARod and asked him about his employee Big Cat” was insane. ARod in turn realized that we’re not just a blog or a radio channel or a podcast network, we’re something bigger, because of you guys. So thank you, from the bottom of my heart (getting a little choked up typing this, whatever, when I start working out again in 2019 I’ll probably bench 250 no problem). When we accomplish things it’s cool to feel like you are all a part of it, especially in instances like this when you truly are a part of it. I hope you all enjoy what we’ve put together. The interviews may be more serious at times and I think you’ll appreciate the interesting stories that all these people have to tell but you’ll also notice the same humor I’ve had for the past 7+ years. Trying to bring out funny moments with A-Listers and insanely successful business people. It’s  weird, fun, and compelling all rolled into one. So enjoy “The Corp” and look forward to season 2 in a few months. Viva La Stool, next stop the Moon.

Check out our trailer and subscribe to get all the episodes when they drop tonight. Doing these projects are possible because of your support. So if you can subscribe, rate, review, it would be a huge huge help into keeping this thing going. Thank you, again.

Our Tech team said we needed to get the SEO up for this new podcast so that’s what I’m about to do.

Not going to lie, this business thing is easy.

"The Corp" Season 2 | Full Video With Erika Nardini and Alex Rodriguez at the Milken Insti...

10) Welcome To The Corp, A Podcast With Big Cat And ARod, But First A Thank You

Big Cat Talks About the Making of The Corp