On Today's Episode of Hard Factor What The Fuck Wednesday Edition....

-Nothing finer than Alabama wine. A 62 year old Alabama municipal worker at a waste water treatment facility got busted for making wine at the sewage plant. Rumor is the varietal was Malbutt.

-A psycho dentist in Grafton, Wisconsin was charged with two million dollars worth of dental fraud on Tuesday after patients discovered he was cutting off pieces of patients healthy teeth and then giving them unnecessary crowns.

-We get an update on the South Dakota Attorney General Jason Ravnsbourg who may or may not have (definitely) killed a guy while driving and tried to play it off like it was a deer.

-Pharma Bro Martin Shkreli (the idiot that bought the million dollar Wu-Tang Clan album) is ghosting a lady who left her husband for him from his prison cell.

-Former FDA director Scott Gottlieb dropped a tweet letting us know he's out there putting in the hard yard for the issues that matter... and that is that his team has successfully deregulated frozen cherry pies just in time for the holidays. You're welcome.

-A man dressed as Santa trying to spread holiday cheer had a lot of time to rethink some of the choices he's made in life after his fan powered personal aircraft went directly into some power lines knocking out power for his entire community.

-A woman and her daughter who set out to find a house in Maryland that has a light display of a giant dick dodged a near disaster as their home burned to the ground while they were on their quest. 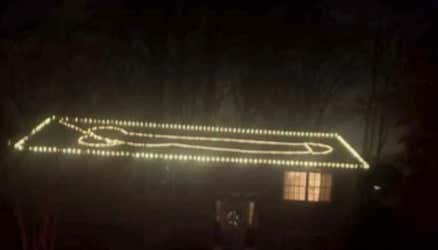 These stories and more….