Uh where to begin? Florida doth giveth in abundance this week.

- A Jacksonville strip club owner is fed up with not being able to hire 18, 19 and 20 year old dancers in their prime and argues the 21 year old age restriction is "unconstitutional"

- One man apparently made the mistake of revving his engine too close to 18 year old Raymond Davis and 21 year old Trevor Barnette in Wimauma, Florida, and after Raymond asked “Are you revving your engine at me” they allegedly shot at the man's car 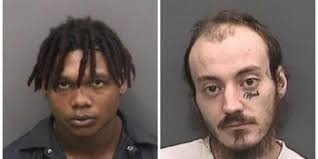 - Florida moms and dads have been spotted smoking weed, drinking and walking around half-naked in the background of their kids’ online classes, frustrating naive teachers who I guess forget they are in Florida

- Some psychopath stole $600 of cat blood from the Anastasia cat clinic on September 17th according to the St John’s police, but why?

- 67 year old Norbert Eugene Logsdon Jr does not like it when you flick him off and yell Biden 2020 when he's waving his Trump 2020 flag on the corner. In fact he will jab you in the face with his flag pole which is exactly what he did to a 13 year old girl

- Earlier this week a 29 year old Ryan Hutton was arrested after pointing his laser at the Voulisa County Sheriffs office helicopter Air One, literally blinding the pilot for "3 to 5 minutes." Two days later 60-year-old Gregory Marr shined a laser beam at the crew aboard the same Air One helicopter and got arrested as well.

Brought to you by Paint Your Life. A professionally done affordable painting is the best gift you'll ever give and if you text the word FACTOR to 64-000 you'll get 20% off and FREE shipping

Hard Factor 11/3: ELECTION NIGHT PREVIEW, the Return of the McRib, and Voting in Labor