May 17, 1924: The Ku Klux Klan arrives in the town of South Bend by train. Indiana was Klan territory back then, with an estimated one-in-three native born white men sworn members within state lines. Governor Ed Jackson himself - was a card carrying Klansmen.

And it wasn’t just Indiana. An estimated 4 million Americans belonged to the Klan in the 1920s, all echoing the group’s philosophy that only white, God-fearing citizens were worthy of respect.

Around that time, the group had attempted to shift public perception from the lynch mobs of the past to an orderly and articulate assembly with rallies held in KKK-friendly areas.

To help continue that indoctrination, the Klan made plans for a parade in South Bend, in close proximity to the Notre Dame campus. 75 percent of the school's nearly 2000 students were Catholic, a religion that I never knew the Klan hated until I read this story. But apparently, by pledging allegiance to the Pope in the Vatican, the KKK’s reasoning was that Catholics were acknowledging a foreign power.

So, the clash in South Bend was going to happen in May of 1924, but in the fall of 1923, the Klan set crosses on fire near the University of Dayton in Ohio - another predominantly Catholic college. They were chased off by angered football players, and that December, the Klan set off firebombs in Dayton during Christmas break.

So in the weeks and months leading up to the South Bend parade, both students and faculty at Notre Dame began to prepare for the Klan’s arrival.

When members began arriving the Friday evening prior to the rally, they were met at the train station by irritated students, who scuffled with the early arrivals by ripping their robes. By Saturday morning, hundreds of students were in town, forming a loosely organized anti-Klan task force. 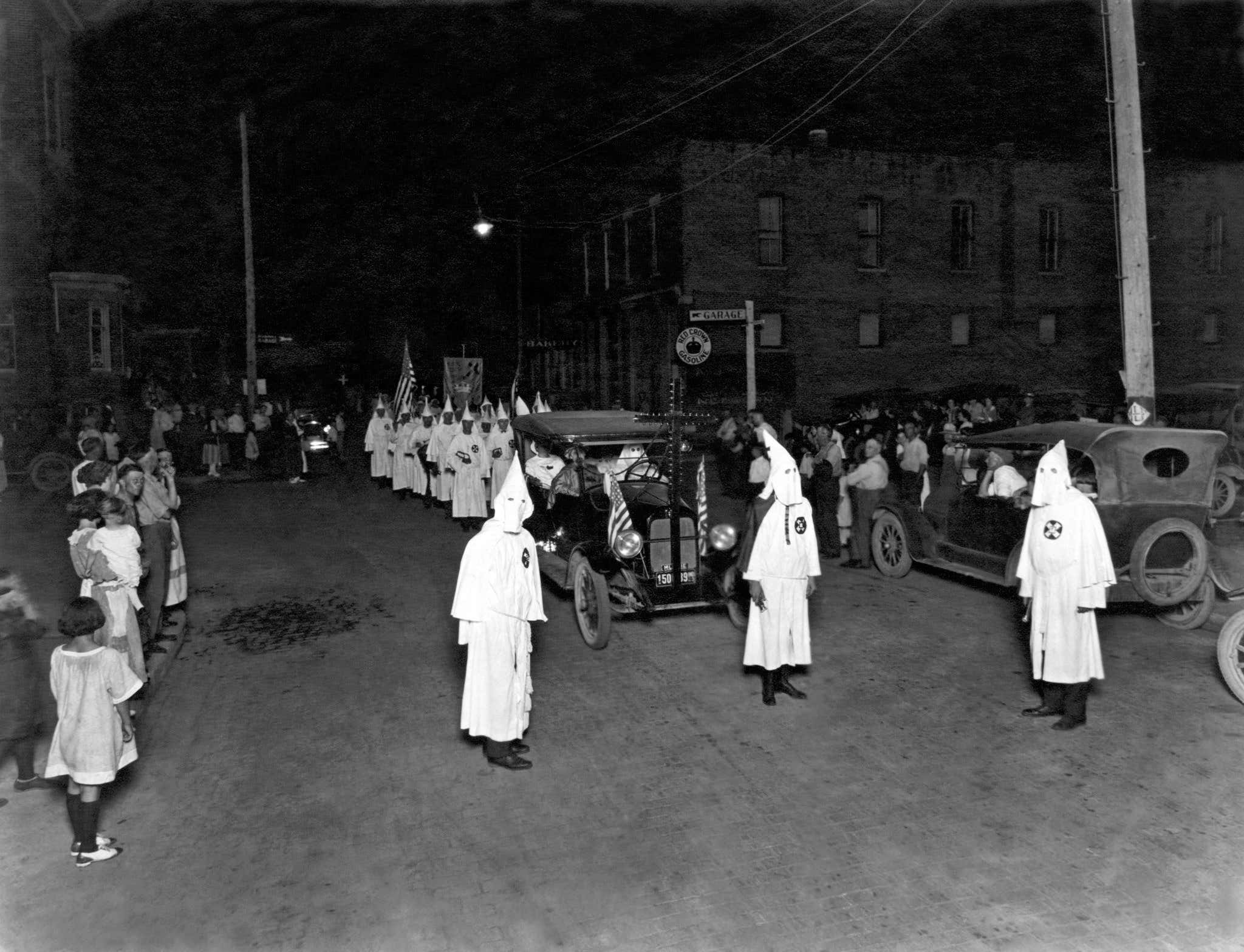 I am paraphrasing from an article, but "Klan members were used to breezing into towns without incident, but near Notre Dame they were immediately confronted by young, ornery college kids proud of their Catholicism. Klansmen were led into alleys and tossed into walls; students who played for the football team formed wedge formations and plowed into groups of Klan members like they were challenging for a BCS title shot.”

The Klan eventually retreated to their headquarters in South Bend, but the students followed and threw potatoes through their windows …which is a very Irish thing to do.

A heavy downpour the next day prompted the Klan to call off their protest/parade, and lingering students who still hadn’t returned to campus met departing Klansmen as they attempted to drive out of town, tipping over cars and smashing windows. Students back on campus Monday had taken to hanging up seized Klan robes and hoods on their walls like trophies.

Unfortunately, neither side was done, and when they met a second time, the robed men would be backed up by local police and a squad of 30 deputized Klansmen, and roughly 500 students jogged the two miles into South Bend, eager for another confrontation.

When they arrived at the Klan’s headquarters, axe handles and bottles were brandished, and blood began to flow.

When the fight was over, students returned to the school, and the Klan returned home, but declared they’d be returning to South Bend in greater number that summer, but it never happened.

The Klan tried to maintain an aura of strength for several more years, the conviction of one of their most prominent Grand Dragons for raping, and murdering a woman in November, 1925 - extinguished one of their most enthusiastic leaders, and the Great Depression dampened the ability of new recruits to pay dues.

Did Notre Dame defeat the Klan? - You decide.

Listen to the latest Twisted History podcast with Large and Vibbs: