This guy also has a bumper sticker on his car that says: "Put your top back on and take off your shoes." - What a creep.

If you have a foot fetish it's probably better to keep that to yourself because most people don't understand it. Imagine this guy going to meet some girl's family for the first time and pulling to the house with that plate? If that were me I'd park down the block. I'd Uber to her house.

This is the kind of thing you might want to admit a couple of months into a relationship, not when you’re stopped at a crosswalk near an elementary school.

I like how he was afraid that his ‘'Put your top back on and take off your shoes’' bumper sticker was a little too fucking subtle, so he decided to just lay it all out on his plate: 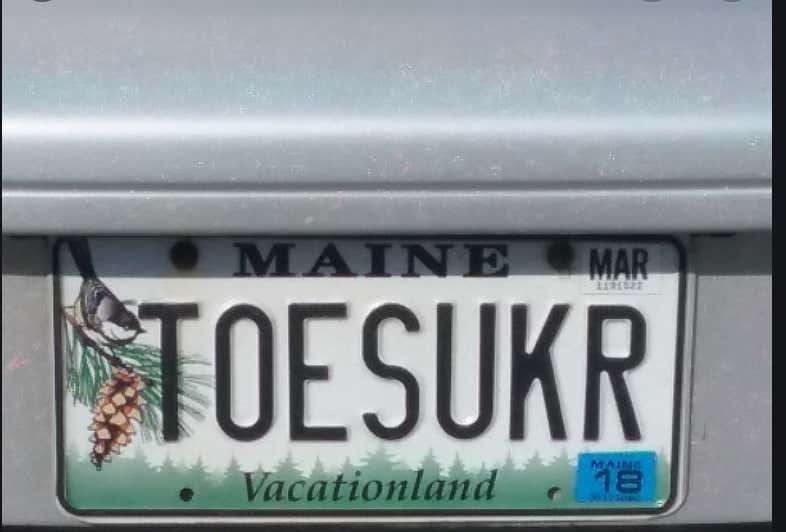 Why would this guy live in Maine? It’s winter weather up there like ten months out of the year, women are wearing snow boots until August. This dumb fucker need to move to Florida.

Plus, there’s so many weirdos in Florida, being a toe sucker would be considered normal. He would only be the 3rd weirdest guy on his block.

An Actual Adult Posted This On Facebook And It's Absolutely Stupid

Your 8-year-old didn't say this

This Deserves A Lot More Silence Than It Got

Be Prepared For An Avalanche of "I Got Vaccinated" Posts

The Killer Bear? It's Not The Real Story Here

Who Is Gonna Smile Making Seven Dollars An Hour?

Just Be Happy You Are Not This Person

Look Rick, If You Want To Do Anything ...You Have To Wear A Mask

"Can You Feel It?" No, And You Have No Friends

Why Do Insurance Commercials Try To Be Funny?

The Packers TD Song Is Terrible

Ok, Who The Fuck Came Up With Tompa Bay?

I Warned You This Was Coming

Put Queso In My Face-O

If You Don't Bring A Shovel To Bury Your Own Shit, It's Not Camping

DO NOT Let Staff Take Your Temperature

Peanut Butter Should Attract A Man

Your Baby Never Said Any Of This