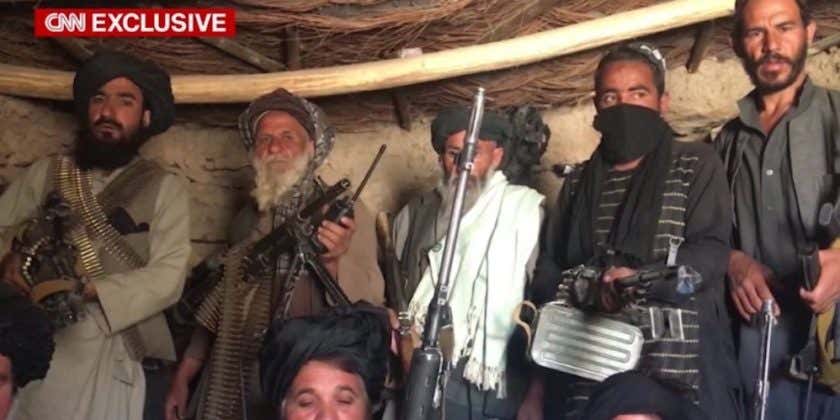 On July 25, CNN published an alarming report: Two videos obtained exclusively by the cable news network appear to suggest that the Russian government is covertly arming the Taliban fighters that have slowly returned to Afghanistan since the end of NATO combat operations there in 2014.

The report, authored by Nick Paton Walsh and Masoud Popalzai, states that two separate groups of Taliban fighters have received “improved weaponry … that appears to have been supplied by the Russian government,” including heavy machine guns, sniper rifles, and the ubiquitous Kalashnikov assault rifles that are a staple of black markets across the planet. If authenticated, these “exclusive videos” of unknown origin obtained by CNN would confirm growing accusations from U.S. and Afghan military officials that Moscow is arming the very enemy it spent a decade fighting during the Soviet-Afghan War.

The news ricocheted across the media ecosystem, shared indiscriminately and uncritically by many highly influential journalists and researchers; veterans organization VoteVets even shared the story with the sober assessment that “Trump’s good buddy Putin appears to be arming the Taliban in Afghanistan with upgraded weapons.”

There’s only one problem: CNN’s report falls apart after the headline. While many of the weapons flaunted by militants certainly appear Russian in origin, the videos provide little evidence of a direct evidence of a recent arms transfer from the Russian government to Taliban forces, according to weapons experts from U.S. Special Operations Command and several non-governmental conflict arms organizations interviewed by Task & Purpose.

Long quote there but I wanted to set the stage for our interview this week with Task And Purpose’s Jared Keller. Jared walks us through this story and we talk about the transgendered policy changes, if there will be policy changes, and the normal way that policy changes in the military are made.

We also talk about the use of shock collars on dogs and if that’s good, ok, or actually bad.