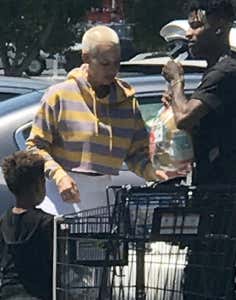 I’m sick to my stomach. Have you seen how good a father Wiz Khalifa is? His relationship with his son is unbelievable. I was recently tipped off to his Instagram, but not for the ass, titties and Cristal bottles like someone might expect on a rapper’s Twitter, but instead it’s full of pictures of him taking great care of his young son. Singing Chicago karaoke and chilling by the pool.

So you can imagine just how sick I am to my stomach to see this kid getting paraded around with 21 Savage. Grocery shopping?? Are they going to cook a meal together? Jesus, I hope not. Issa dinner date. Damn Savage why you snacking so hard? Etc., etc., etc.

For those who aren’t as in tune to the rap game, it looks like we might be heading towards a chilling new trend, where rappers are savagely good parents towards their children. In a foregone era, rap beefs were settled with diss tracks, fisticuffs, possibly even through bouts of knife-play or exchanges of gunfire. But just as the era of boom bap has taken a back seat to the new rhythms of rap, so to do the archaic methods of settling disgruntlement between rappers. Don’t like a guy? Take his son to Whole Foods.

To cut anyone off at the bend who is gearing up to remind everyone that this is a sports website, let’s not forget the psychological warfare that Russell Wilson is waging on Future.

No wonder Future’s diet is purely Xanax and Codeine; he’s got that goober Russ Wilson fathering the shit out of his son, teaching him to swim in infinity pools.

Fatherhood is the hottest thing in the streets. Jay-Z, Kanye, they wear their fatherhood like a badge. Nas? Full songs about parenting. It’s trickled down to the younger rappers, whose social media are plastered with images of their parenting. It’s gotten to the point in the rap game where, if you don’t have kids, you’re a total pussy.

Think I’m exaggerating? Listen to this song by DJ Khaled and Chance the Rapper. It’s the proudest parenting song of all time.

21 Savage is just keeping up with the latest trends by putting a child or two under his wing. Good for him. To hear the full breakdown, listen to today’s Happy Burst, where we further discuss this and Amber Rose’s potentially hypnotizing booty.

Any jokes about the falsified rumor that I’m a father are simply playing into the lobbying of the anti-dog agenda. Stay woke.