On today's Pardon My Take... ADAM SCHEFTER! The ESPN NFL Insider joined Mr. Cat and Mr. Commenter on today's show to discuss the biggest stories in football this season, the future of his career, and much more. The guys also covered a topic that included myself. When I was a sophomore in college, I realized that Adam Schefter and I had something more in common than being Big J's. That's when I sent him an email, unsure on whether or not I'd get a response: 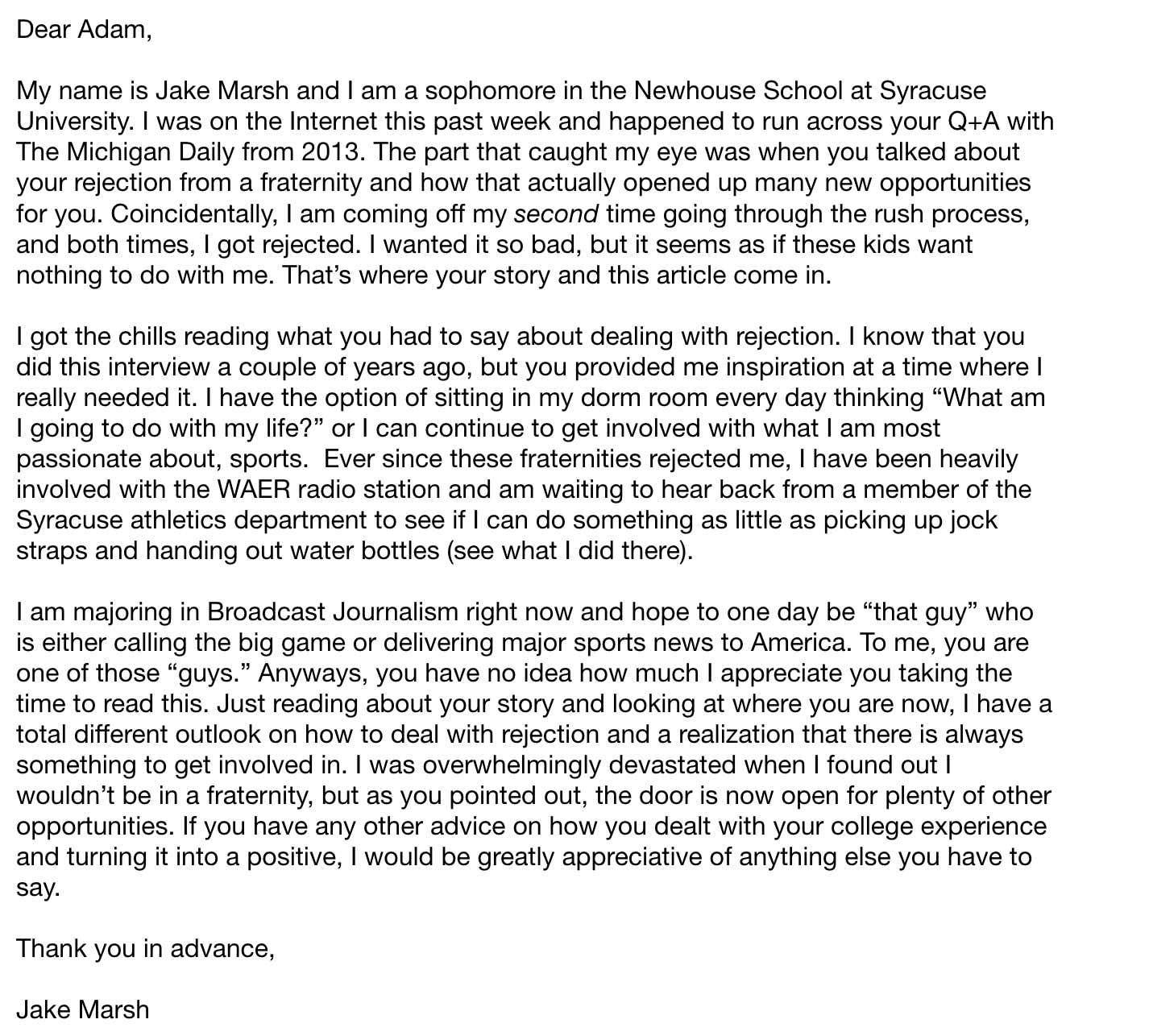 I was in a tough spot at the time back in 2015. I knew that I wanted to go to Syracuse because it offered the best sports broadcasting program in the country. So, a year or so in, I was taking advantages of the opportunities on the broadcasting side, but similar to everyone else, I wanted to have some fun in college. Why not join a fraternity? Clearly, it didn't work out (enter nerd jokes here), and that's when I stumbled across Adam Schefter's story, where the same thing happened to him.

A few days after sending out the above email, I hadn't heard back. I checked my spam to double check, and that's when the below message was waiting:

PFT read the entirety of Schefter's response to me on today's PMT, but it was awesome to get this motivation at a time where I really needed it. Schefter reiterated some of the points he mentioned on today's show. Some quotes that stood out included:

"You know what? If I didn't get in, I would have lost out on some of those great experiences and some of those friends, but it probably would have worked out elsewhere, like it would have been a different experience. That's all. That's the point, right? Whether you're applying to a fraternity, an internship, a job, there are always going to be people that tell us no. I have hundreds of rejection letters, right? I wanted to go cover the Colorado Rockies baseball team for the Rocky Mountain News, and they wouldn't let me go cover the new baseball team, expansion franchise. 'No, you're going to stick on the NFL, and you're going to like it.'"

And would you look at that? Schefter wanted to cover baseball, but instead, his bosses told him to stick to football. That rejection would end up being a blessing in disguise, and Adam Schefter is now the top guy in the industry at breaking football news.

If there's someone out there who is dealing with any sort of recent rejection, listening to Adam Schefter's wise words can go a long way.