You may already know, but I am a big fan of preserving history... No matter how ugly or twisted it may be.

Last year there was a giant rock on the campus of the University of Wisconsin that the students lobbied to have removed.

Well, because the existence of a defunct racist nickname for the rock (which hadn’t been used in almost 100 years) triggered the sensitive touch-holes of a few uber-woke student body members.

I heard about it and blasted them in an expertly written blog because the whole thing just seemed silly to me.

Meanwhile, removed statues of Christopher Columbus are littering storage bins all over the country, and Columbus, OH has a contingent of delicate citizens that would like to change the name of their city to something that doesn’t represent a man who is now widely (and sometimes only) known as a murderous villain... Which he was.

It’s just what we as a society do nowadays, and I am on record as being someone who doesn’t like it… For the most part.

Seeing all that Columbus accomplished, both good and bad, is still an important part of history.  As is appreciating a very old and very large rock sitting in the middle of a college quad.  Removing that history from our sightline teaches nothing, and as Winston Churchill once said, “Those who fail to learn from history are destined to repeat it.”

--- I haven’t checked the daily cancel newsletter, so perhaps I can no longer quote Winston because he used the n-word once while quoting a Tupac lyric… So for those that I offended by merely mentioning a drunken eugenicist like Mr. Churchill?  Go fuck yourselves, you pack of mewling quims. ---

Still, in the tradition of compromise, I understand the desire to remove ugliness from public places... Particularly monuments that not only memorialize but celebrate a figure who did more bad than good.

Case In Point: Doctor James Marion Sims... A man who died nearly 140 years ago but is still referred to as “The Father of Modern Gynecology”.  A man who also has a half-dozen statues dedicated to him around the country, but the one in NYC’s Central Park was removed in 2018 and is collecting dust in some garage until it is set to be reinstalled near his grave in Greenwood Cemetery at some point. 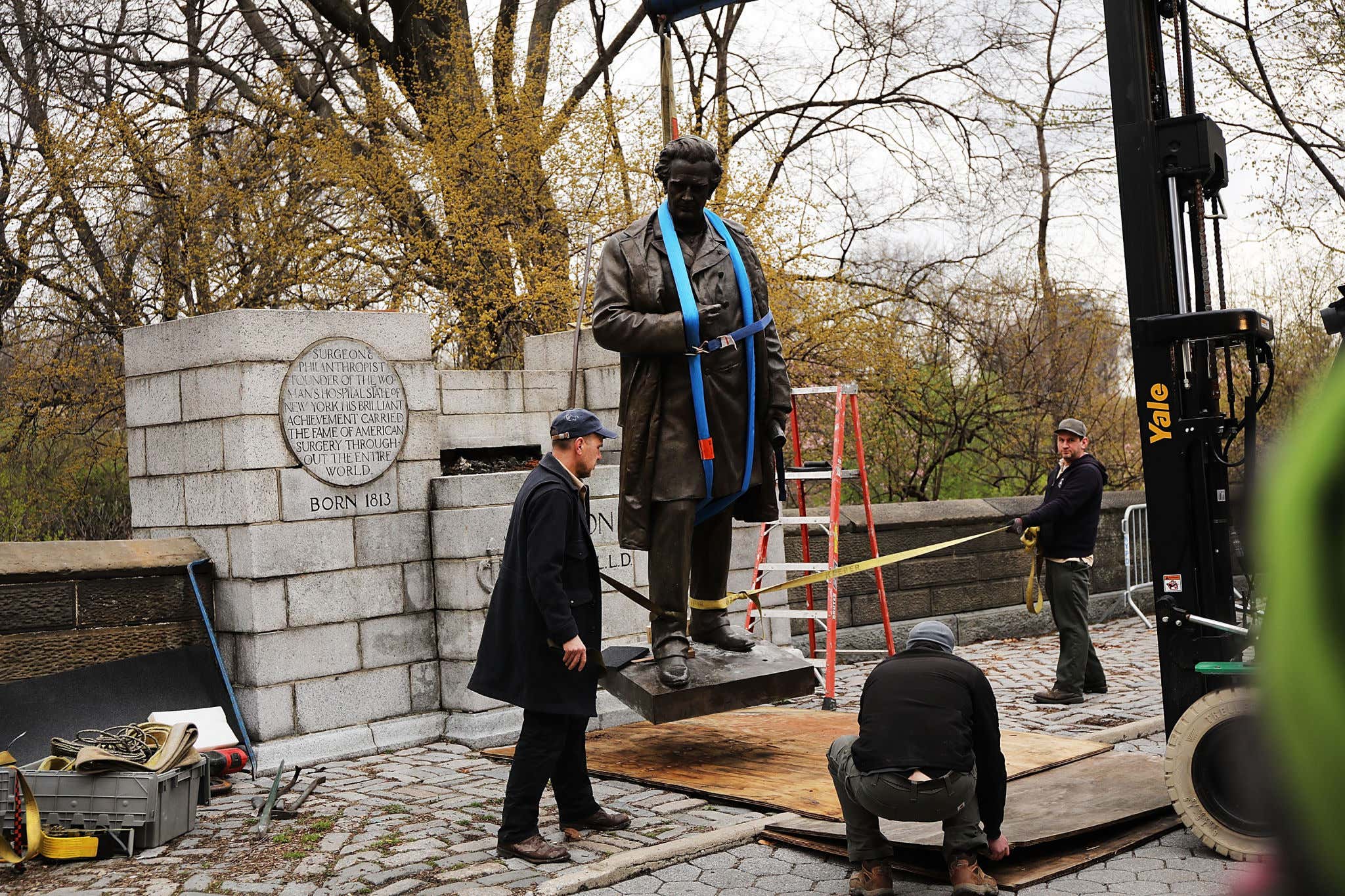 But why was the statue of the man who invented the speculum (seen below with Vibbs) removed?

What exactly did James Marion Sims do way back in the late 1800s that would have repercussions in 2018?

Well, for starters, the research Sims used to develop pioneering tools and surgical techniques related to women’s reproductive health was conducted almost exclusively on enslaved Black women… AND without anesthesia.

In his defense, anesthesia was a new development around the time Sims was practicing medicine.  But while some doctors back then didn’t trust anesthesia, Sims’ decision to not use it—or any other numbing technique—on his slave patients was based on his misguided belief that Black people didn’t experience pain as white people did.

The story goes much deeper, but I have saved the darkest details for the attached podcast- The Twisted History of Unethical Doctors.

I will say this though… Much like Dr. Sims, there is a long list of historical figures that are a two-sided coin… One side is good and the other is bad.

And oftentimes, one side of that coin far outweighs the other. 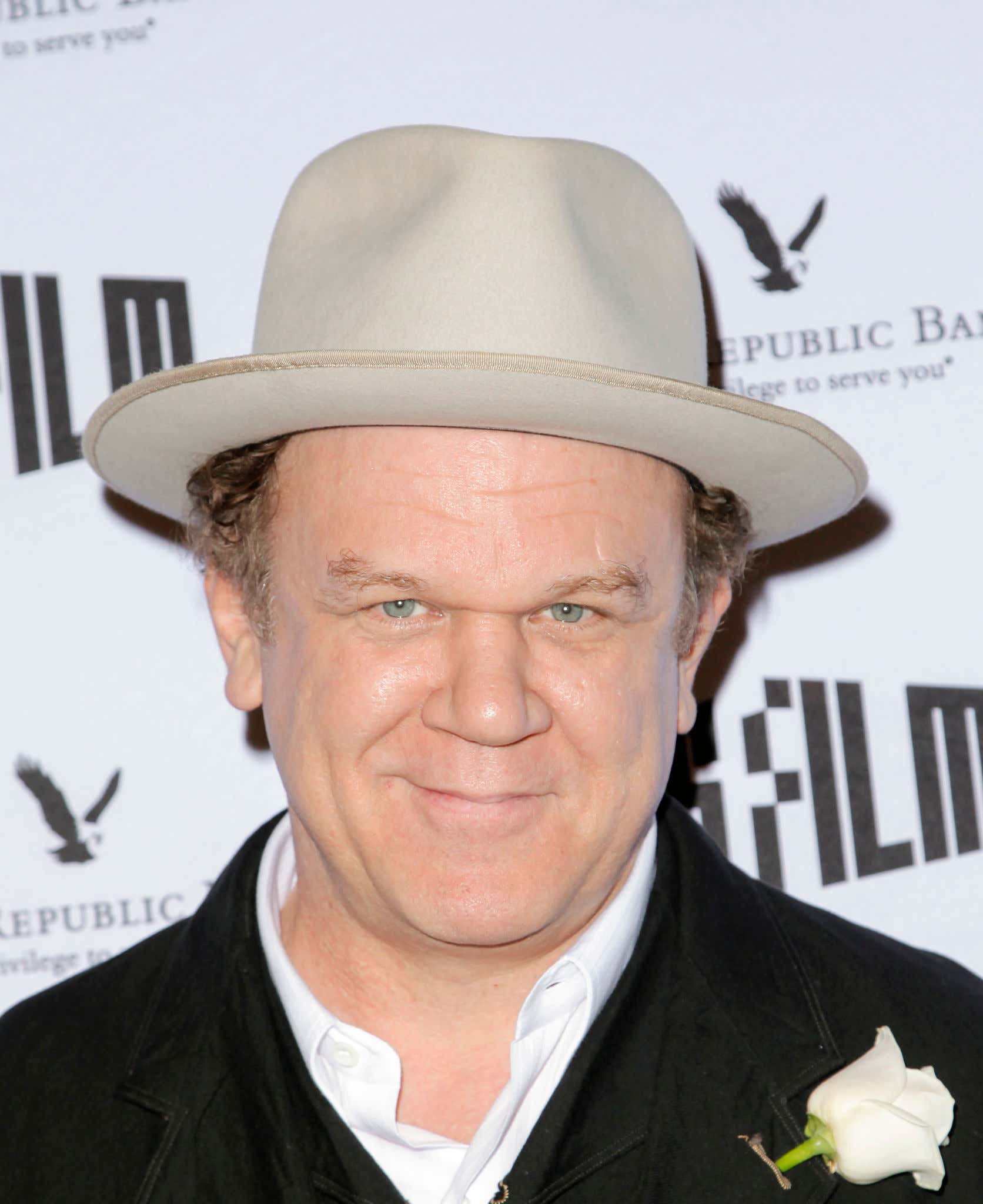 On the positive side, Gacy was a pretty good artist… Here are some of his paintings being put out for display on June 18th, 1994 in Louisville, KY. 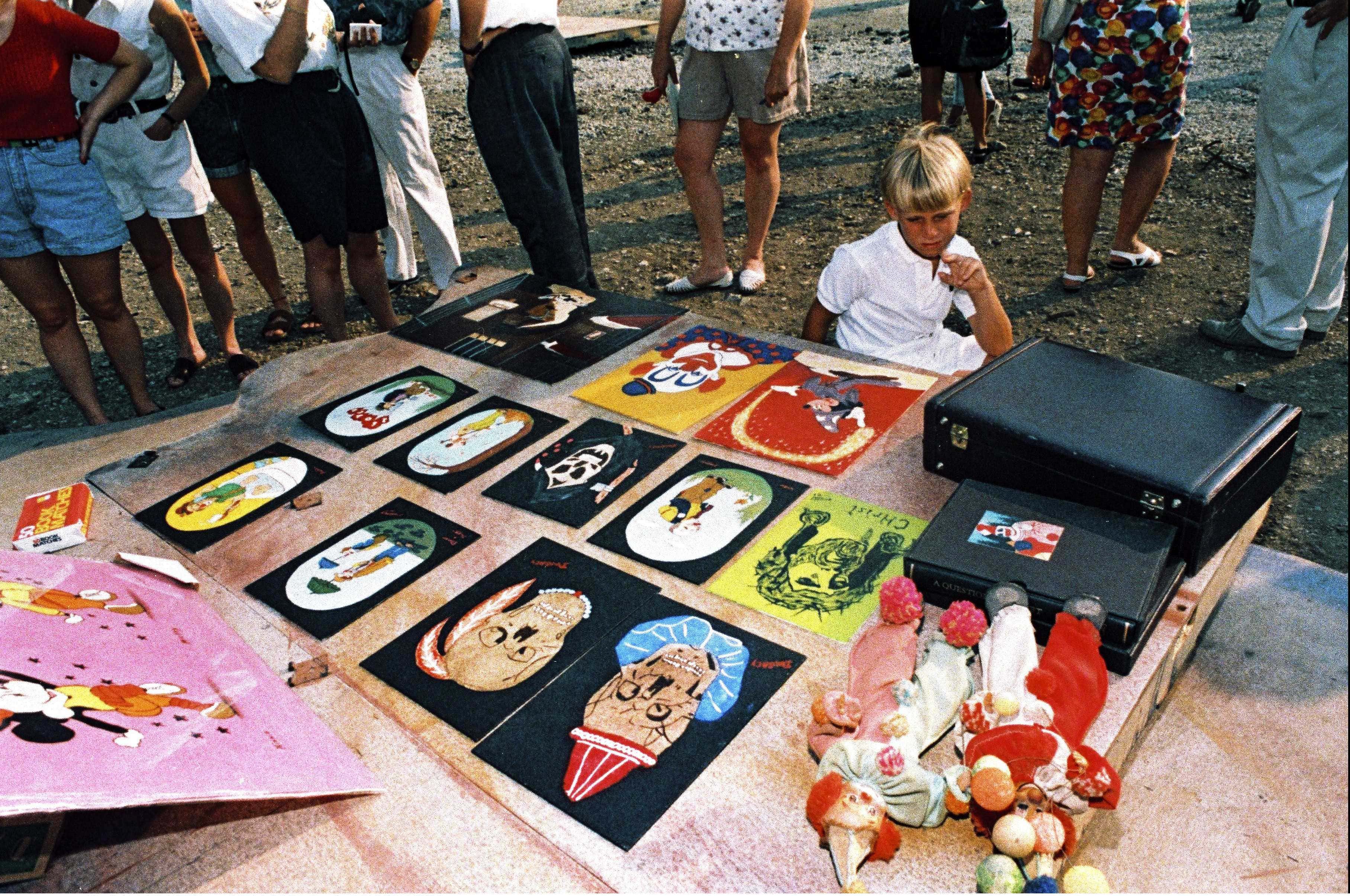 On the flip side of that coin, Gacy was a serial killer and sex offender who assaulted and murdered at least 33 young men and boys.  Because of that, here are his paintings being burned later that day on June 18th, 1994 in Louisville, KY. 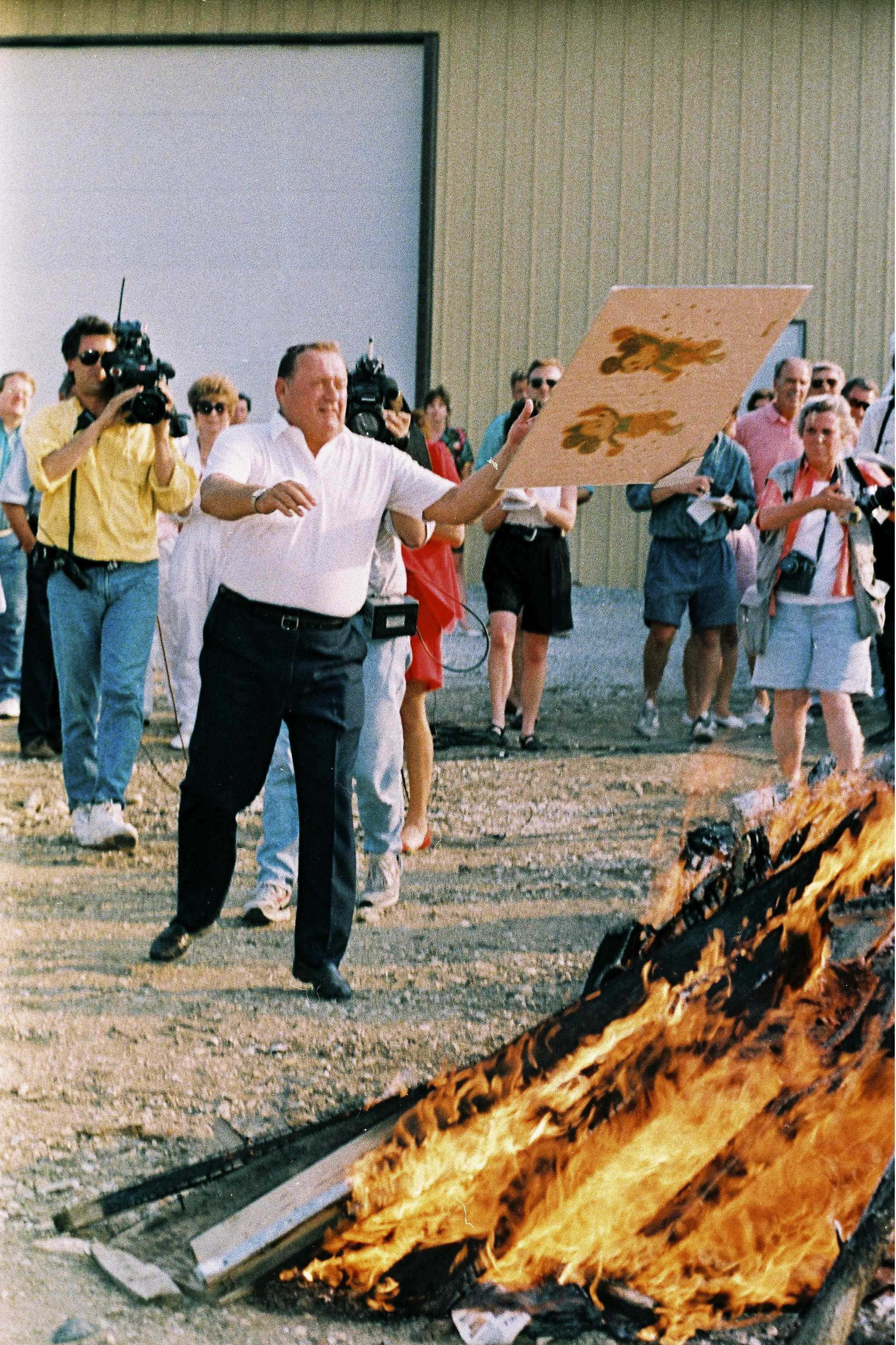 The destruction of Gacy's paintings was an easy decision to make, as was the removal of Sims' statue above, I suppose.

I don't discount the strides he made in the field of gynecology, but I also think someone would've eventually matched those strides, and done it without sawing female slaves in half without anesthesia.

But what about a guy like Fritz Haber?… A guy who I think has the most interesting two-sided coin in history. 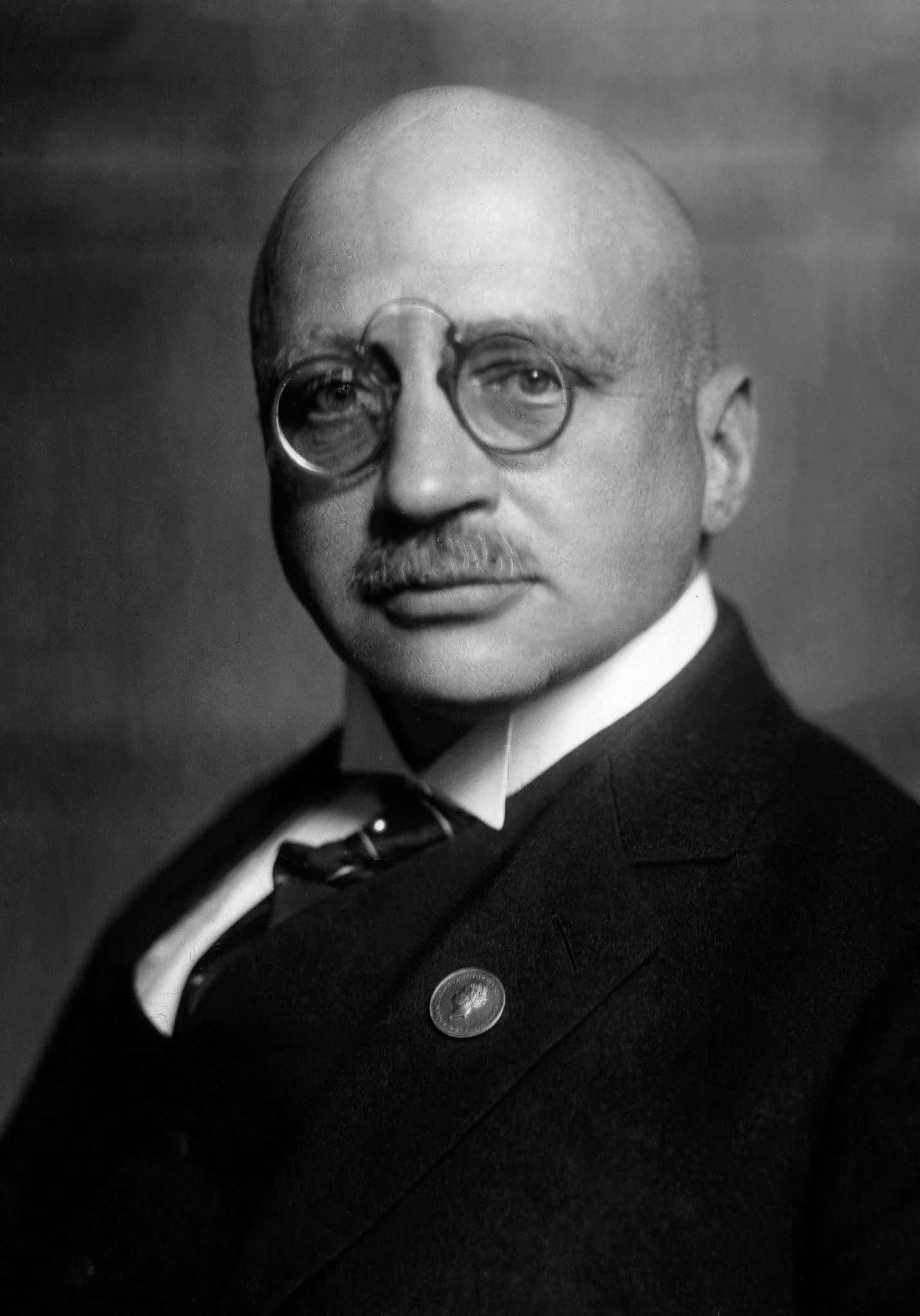 How should Fritz Haber be remembered?

Before you answer that, perhaps I should tell you who Fritz Haber was.

Haber was a German/Jewish chemist who received the Nobel Prize in 1918 for his invention of the Haber–Bosch process, a method used to synthesize ammonia from nitrogen gas and hydrogen gas.

This invention is of importance for the large-scale synthesis of 2 things: Fertilizers and explosives.

Let’s look at fertilizers first… It is estimated that two-thirds of annual global food production uses nitrogen from the Haber–Bosch process supporting nearly half the world's population.

That is very good.

They said that "he pulled bread from the air", and they were not far off.  Before Haber’s world-changing discovery, scientists believed the human race would top out at 1.5 billion and then face starvation… Like a Thanos Snap would occur when the food supplies ran tight.

But Haber set a different course and figured out how to break nitrogen’s bonds under extreme heat and pressure and with added hydrogen… And out of his experimental tank dripped liquid fertilizer.

In 1909, he unveiled his discovery to the world, and today 100 million tons of synthetic fertilizer are created each year by this method feeding over 8 billion people… It is perhaps the greatest scientific discovery in history.

That is very VERY good.

Now, here comes the bad… And, much like me, it comes in 3 parts:

1) After WWI began, Fritz explained to the German War Department that the same amount of energy it took to separate nitrogen atoms was released when they slammed back together.  He said that by reversing the chemical reaction he used to grow life, he could make explosives… Which he did for the Germans.  And that innovation probably extended Germany's losing effort by three years.

2) Haber is also considered the "father of chemical warfare" for his years of pioneering work developing and weaponizing chlorine gas during World War I.

You see, WW1 was filled with trench warfare, and it caused stalemates… Two trenches were separated by a 'No Mans Land", and the use of tear gas did nothing because it dissipated into the air.

Haber was able to synthesize a poisonous and concentrated chlorine gas that was heavier than air, so with the right wind pattern, it would creep into trenches and kill any living thing in its path. 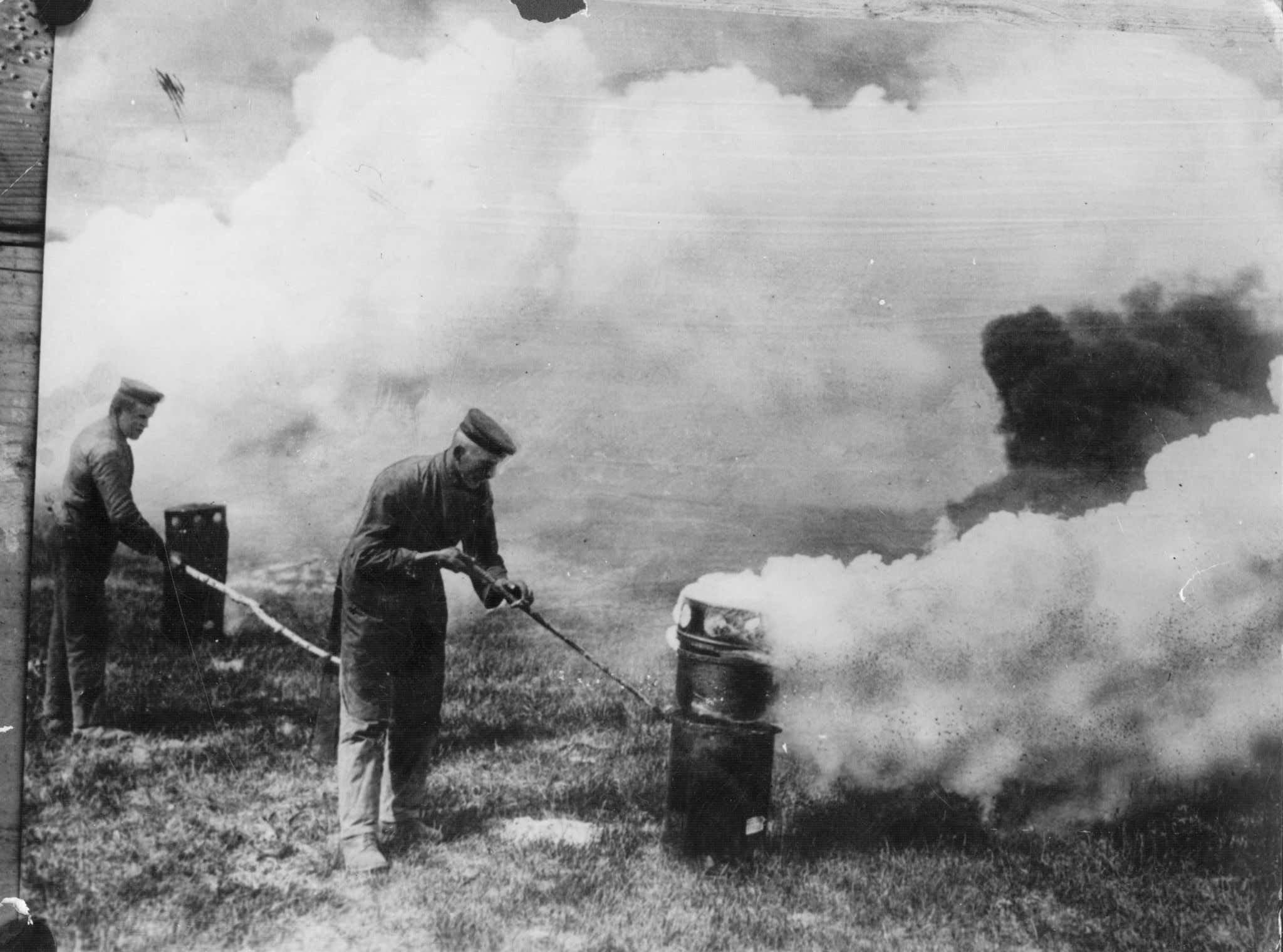 SOOOOO… 2 out of the 3 bad things so far were explosives and chemical warfare… Not good, Fritz

And finally, for number 3… Even Haber’s most innocent-seeming activities turned out to have catastrophic consequences.

He produced, almost as an afterthought of his poison gas research, a useful garden insecticide called hydrogen cyanide and then forgot about it… Another name for that insecticide was Zyklon A.

A quarter of a century later, with Haber long dead, this same insecticide, with its warning-indicator odor removed and relabeled Zyklon B, killed millions of innocent European Jews in the extermination camps… And the children and grandchildren of Fritz Haber’s sisters were among its many victims.

So the gas that helped kill millions of Jews (including members of his own family) was developed by a Jew who also "pulled bread from the air" and fed BILLIONS.

How's THAT for a double-sided coin?

Which begs the inevitable question… What should we do with this pencil drawing of Fritz Haber? 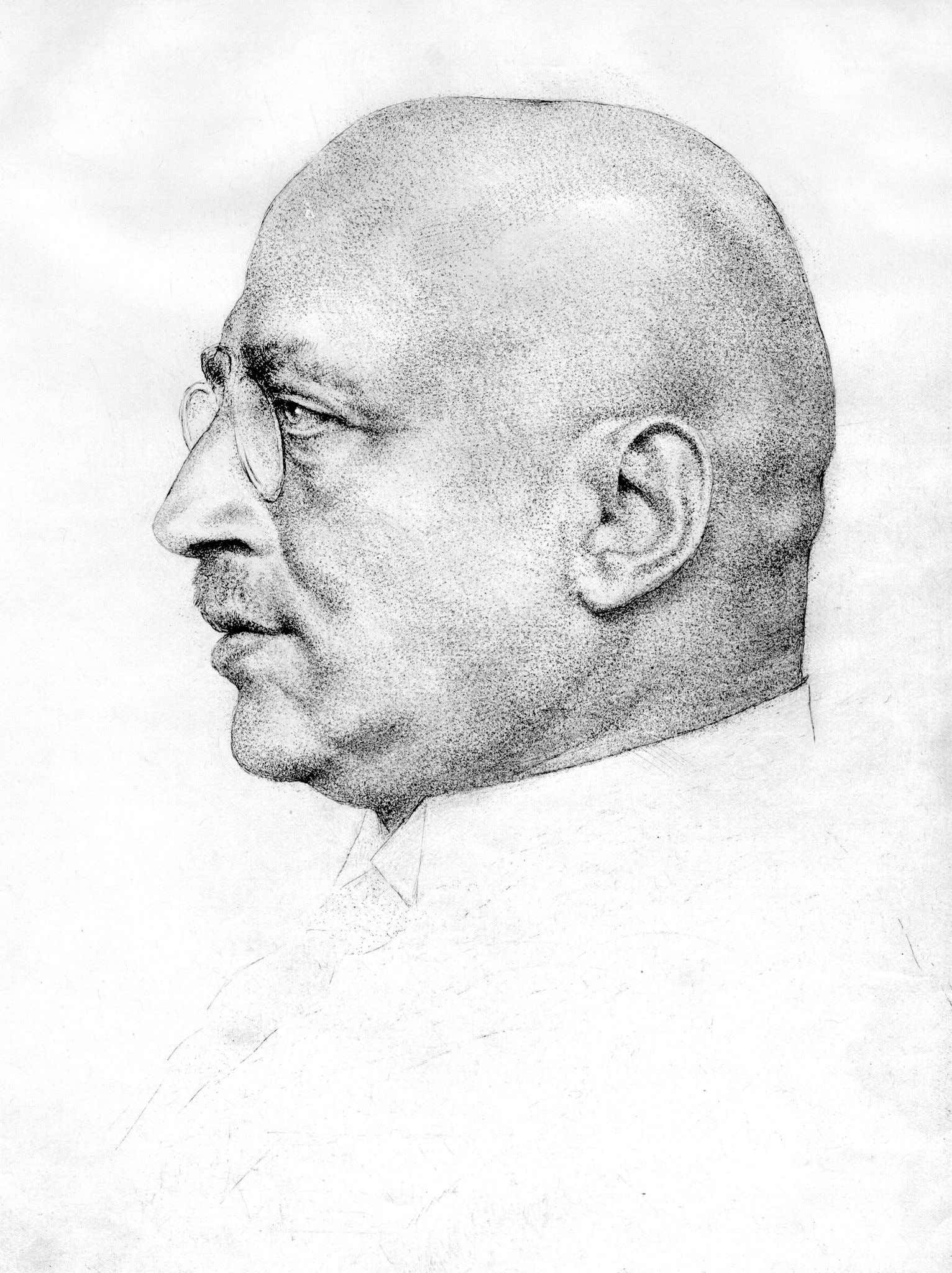 And the answer is… Absolutely nothing… Because it's hanging in my den, and if you have a problem with that, you can go fuck yourself.