I've said it before and I'll say it again. Red Line Radio has been fantastic since flexing to two shows a week. Sports aside, it's opened the doors for Barstool Chicago Radio Hour level banter and that's really where we hit our sweetspot otherwise known as the equilibrium point: 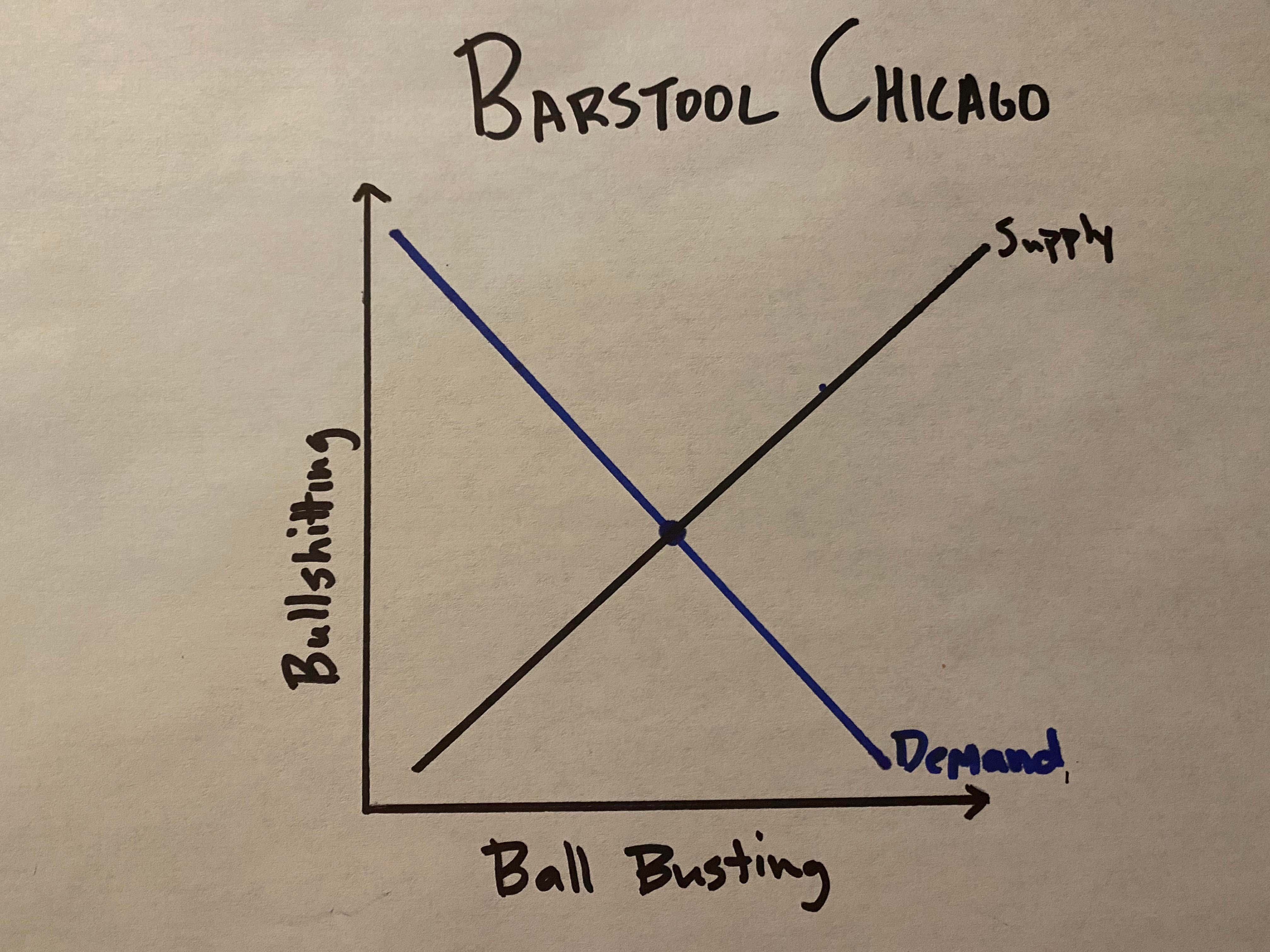 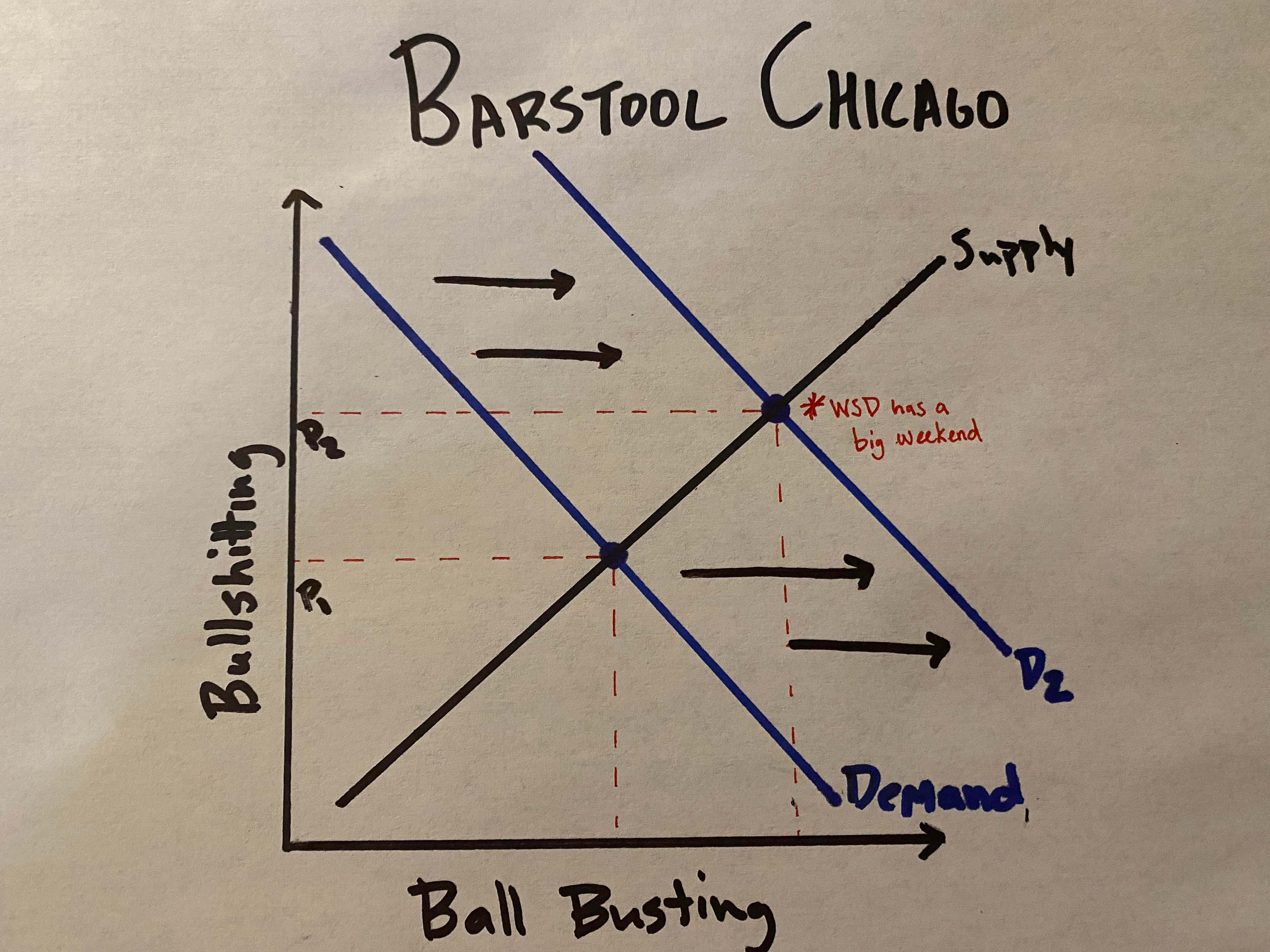 Overall this is a fair representation. Not exactly a 1:1 on the price/quantity relationship but you guys get the point.

I bring this up because we actually get into equilibrium points this week in a very relatable manner. Specifically, what's the longest you're willing to drive before it becomes necessary to book a flight? Relevant because Barstool Chicago recently took a maiden voyage to Pittsburgh where most of the guys drove. I was flying in from a NASCAR event in Phoenix so that was out of the question. But the rest of the crew made the 7 hour drive, which was a point of debate this week.

By all means please participate in the discussion:

Personally I'm right around the 6 hour watermark. Anything more than that becomes a grind and I don't want to be cranky. I don't want to be confined and responsible at the same time. It can be mental warfare counting down the hundreds of miles for consecutive hours. And often times it's cost neutral when considering the IRS-recommmended $0.55/mile calculation for personal automobile travel.

I can be talked into Nashville which is about 7 hours because it's Nasvhille. But the drive home is so brutal. There's no debating between an airport hangover and a road trip hangover. Motion sickness. Farts. Your buddy's dip spit abutting your Barstool black label revitalyte. Judging the playlist. Holding your piss. It can be a demanding experience.

Not saying the airport's a cake walk. I paid for CLEAR because I was sick of getting so mad at the people who used it. So I joined them and it's been fantastic even at a challenging price point. That's become a manageable aspect of travel for me but it puts me in the minority. I know security lines suck.

Even worse is lingering at the gate with everyone. Naturally it's the last gate imaginable, stuffed into the cul-de-sac at the end of the terminal. So much aimless lingering going on and really bad people watching. Water costs $7 and there isn't an outlet in sight. You might even have to take a dump in the unholiest of public bathrooms. All of this works against you at the airport and I haven't even mentioned checked bags.

Regardless, it's a better experience than the road trip once you get over the 6-hour hump with some moderate exceptions. That's me. I understand other people can get into the double digits but I just don't have that headspace. The longer you go, the greater the anxiety for the return voyage and now we're just ruining the trip all together. Future Carl hates that shit.

End of the day though it's just personal preference in a judge free zone. You're the master of your own domain. Don't let me talk you out of that straight shot down 55 to New Orleans this February. You and the boys need a good reason to bond.

For more on the topic: