The Big 10 has tons of very good basketball teams, there is no doubt about that. But what the B1G hasn't produced in the last 22 years is a college basketball National Champion. That's right, since Tom Izzo's Michigan State Spartans last won it all in 2000, nobody else in the conference has done the same. Could this be the year that streak comes to an end? There is a good chance that is the case. Purdue returns everybody, Michigan, Indiana, and Illinois all get their stud big men back, and there are plenty of tournament-bound teams in between.

On this week's episode of the Barstool Bench Mob, we previewed the Big 10 Conference. We focused on all 14 teams in the league, and eventually made our picks for regular season conference champion, Player of the Year, and Coach of the Year. Here we go:

Having one of, if not the top recruiting class this season shows the immediate impact Juwan Howard has made since he took over a few years ago. Friend of the Program Hunter Dickinson has a chance to be the best player in the country, as he scored in double figures in 23 of 28 games last year. The other notable returnee is Eli Brooks, whose 125 career games of experience may come in handy with a a bunch of freshmen coming in. 5-star SF Caleb Houstan is likely to be a one-and-done player and a potential lottery pick, as he is Michigan’s highest-rated recruit since Glenn Robinson III in 2012. He is one of three McDonald’s All Americans in this year’s class and played at Montverde with Cade Cunningham. DeVante Jones is a Coastal Carolina transfer who was the Sun Belt POY last season, scored 1,400 points in three seasons. Brandon Johns will most likely round out the starting five, with freshmen Moussa Diabate, Kobe Bufkin, and Isaiah Barnes easing their way into the rotation, too. Michigan doesn’t have any areas of need and has the roster and depth to get to the Final Four. 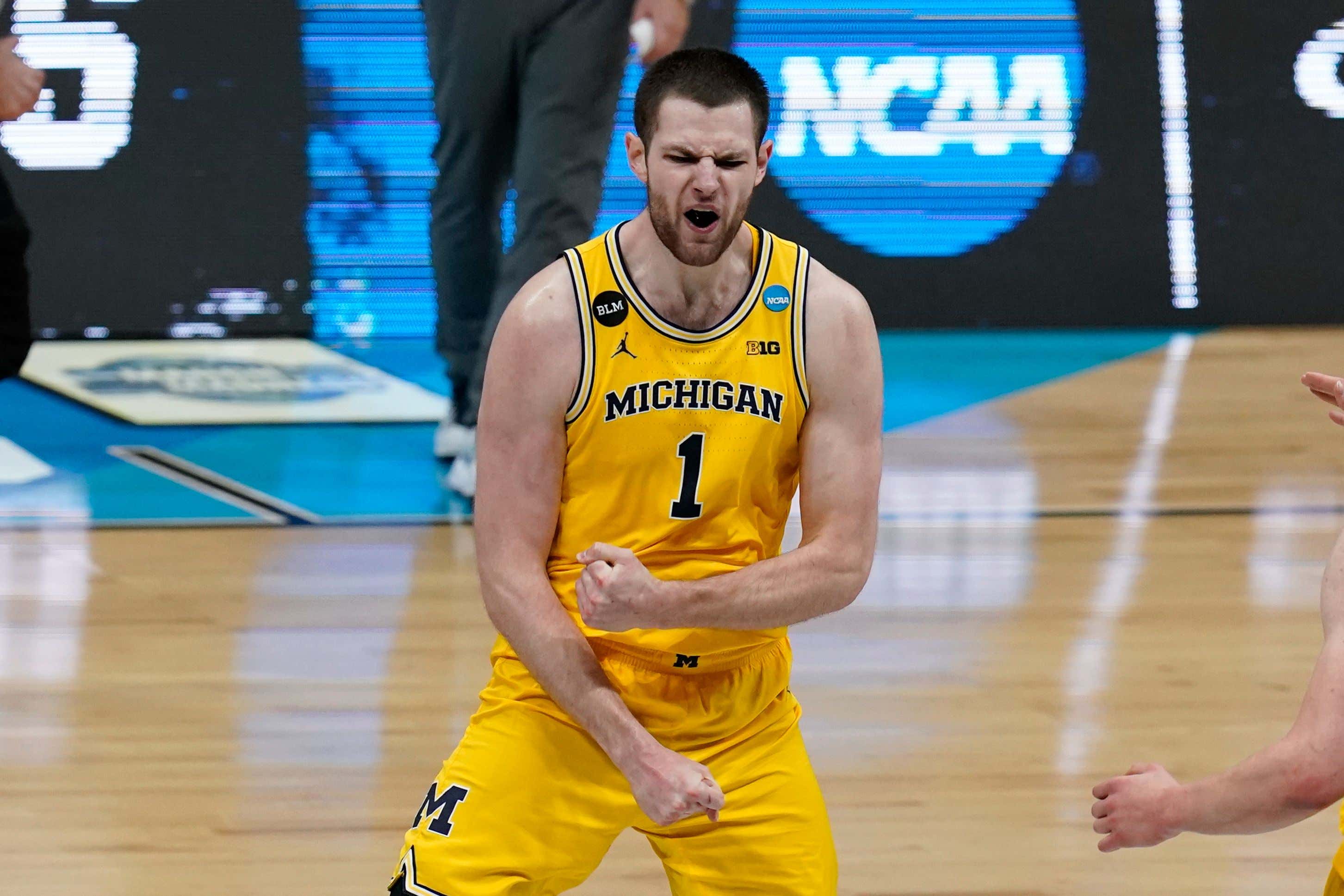 In a sport where moving pieces via the NBA and the transfer portal has taken over, Purdue isn’t taking that route this season. The Boilermakers return all five starters and 91.3% of their minutes from last season. In fact, Matt Painter’s squad is one of four power conference teams that didn’t take in a transfer. All-Conference big man Trevion Williams is going to pose some problems for opposing guys in the paint, and Coach Painter says he is in the best shape of his life.  Jaden Ivey emerged late in the season last year and Coach Painter hopes he can take that next step defensively. It is nearly impossible to miss Zach Edey when the 7-4 fella is on the court, who you’ll rarely see in the game at the same time as his big man counterpart in Williams. The Boilermakers will emphasize their high defensive standard and if they can be consistent on that end, a Final Four is possible. 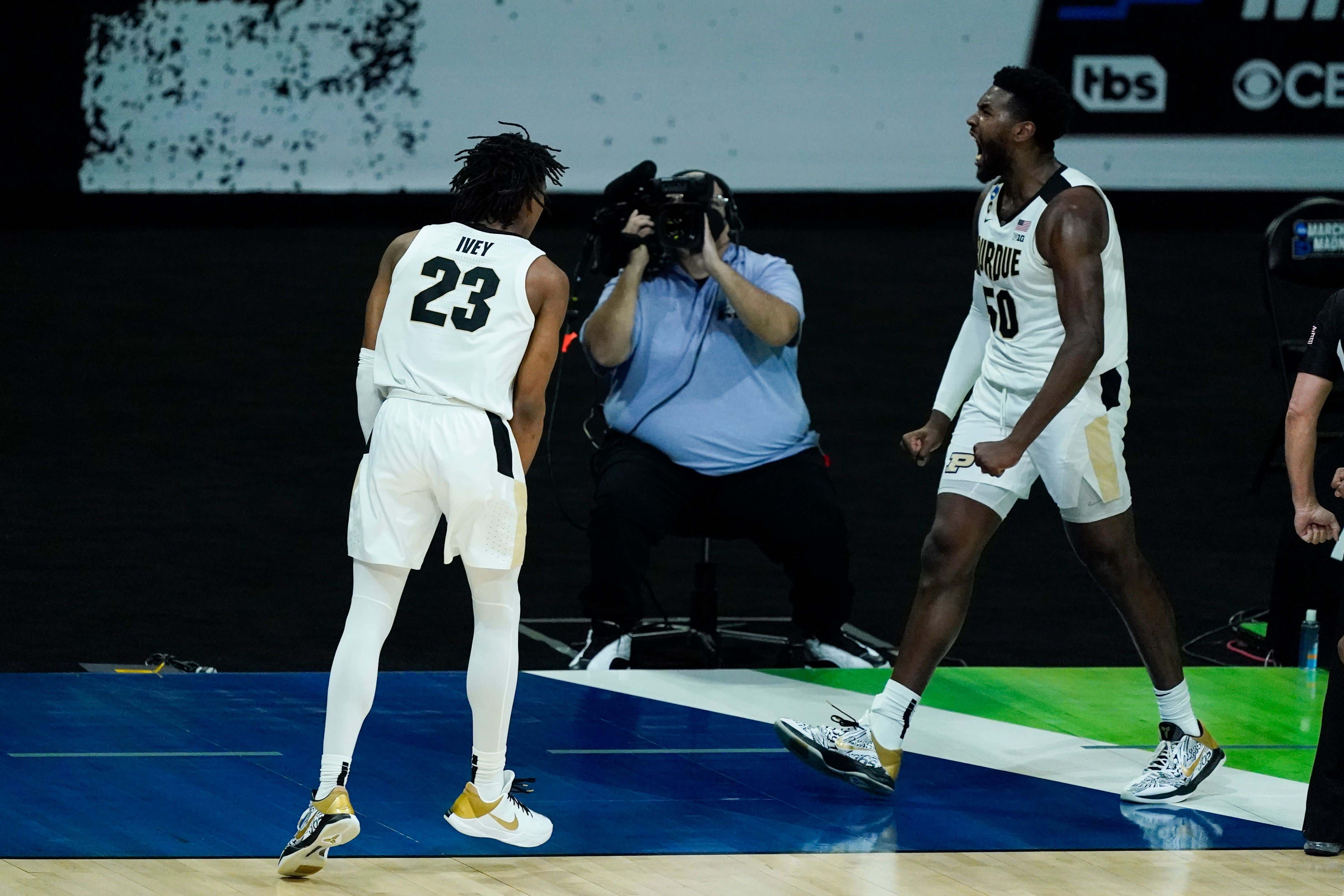 It was a disappointing finish in 2021: The Fighting Illini were a No. 1 seed in the NCAA Tournament, but then laid an egg in Round 2 against Loyola-Chicago. Ayo Dosunmu is off to the NBA, but luckily, one of the best big men in the sport is back In Champaign: Kofi Cockburn. A lot of people thought Cockburn was a goner during the summer, but after entering the NBA Draft and the transfer portal, he ended up not going anywhere. Brad Underwood also lost all three assistant coaches this offseason but Andre Curbelo is another key returnee and has the ability to make your jaw drop as the team’s point guard, while Trent Frazier’s defense will pose a threat to opposing teams. 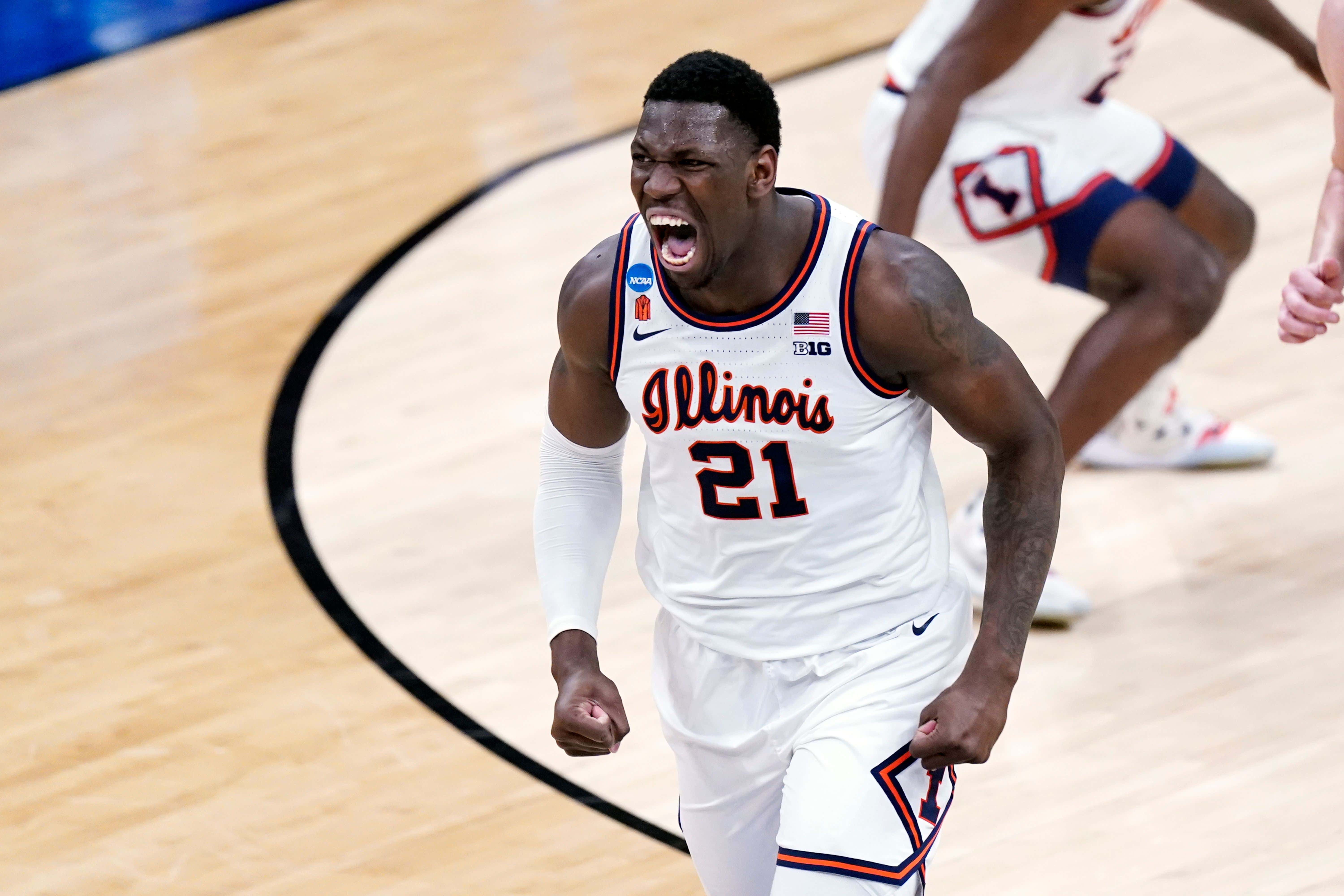 The Buckeyes were on the wrong side of history in last year’s Big Dance, becoming just the fifth team in the last 20 years to lose as a 2-seed against a 15-seed. But Ohio State returns four of the five starters from last year’s team, led by 6-7 sophomore E.J. Liddell, who is expected to move to the perimeter more often than not. Penn State transfer Jamari Wheeler hopes to help provide answers on the defensive end, and Louisiana transfer Cedric Russell scored 26 against eventual champion Baylor last season. If those new guards can mesh at some point, the Buckeyes will once again find their way towards the top of the B1G. 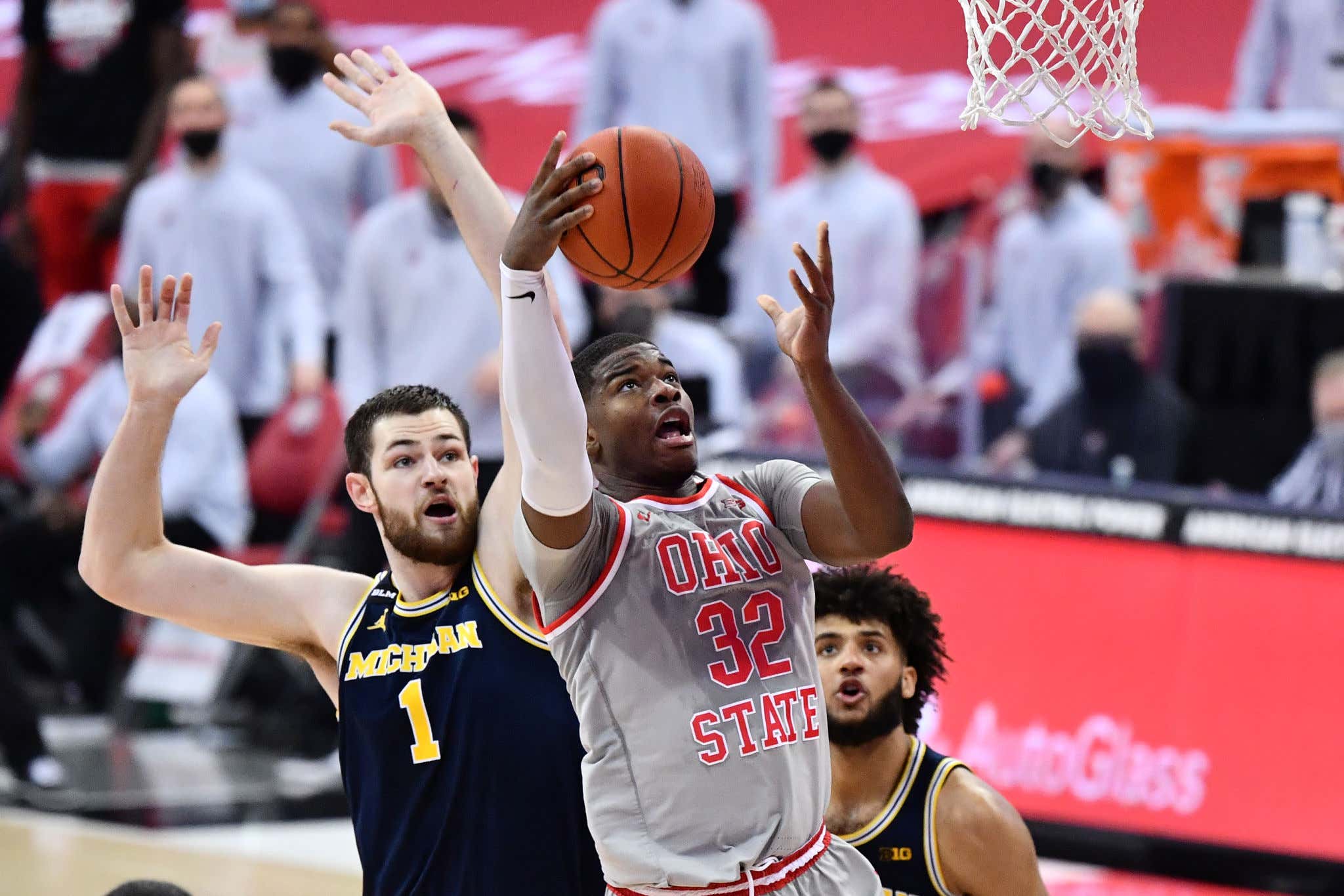 After a bunch of underwhelming tournament runs during his tenure, Mark Turgeon actually received a contract extension during this offseason. Maryland fans grew impatient with Coach Turgeon, but he got to the NCAA Tournament and even won a game in March. The Terrapins made some major moves in the transfer portal early on in the offseason, scoring Rhode Island’s Fatts Russell and Georgetowns Qudus Wahab. Combine that with three returning starters in Eric Ayala, Hakim Hart, and Donta Scott, and Maryland suddenly has very high expectations once again heading into the season. The experience and size can carry the Terps to being a second weekend team in 2022. 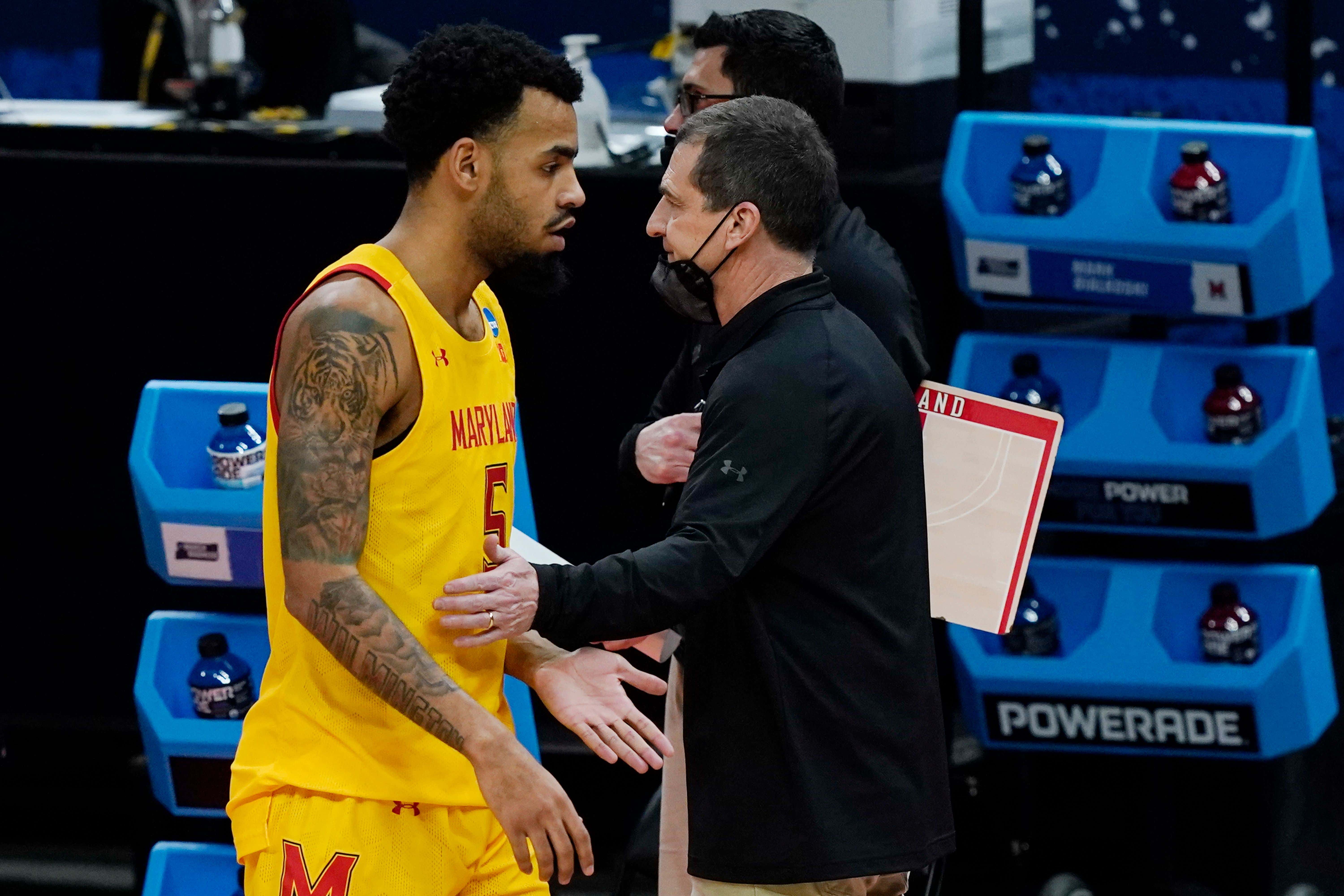 When you have a Hall-of-Fame head coach on your side, expectations are going to be through the roof each and every season. And when you have to sneak into the NCAA Tournament and get bounced in the First Four with said Hall-of-Fame head coach, there will be disappointment around town. Last season marked Michigan State’s first losing season in B1G play since 1993. After not having a true point guard last season, Coach Izzo went into the transfer portal and brought Northeastern transfer Tyson Walker to East Lansing. 5-star freshman guard Max Christie will also be a factor in the backcourt, who is the teams highest-ranked player since Jaren Jackson Jr. in 2017. A trifecta of juniors in Gabe Brown, Joey Hauser, and Marcus Bingham will add the necessary experience in the Spartans’ rotation. 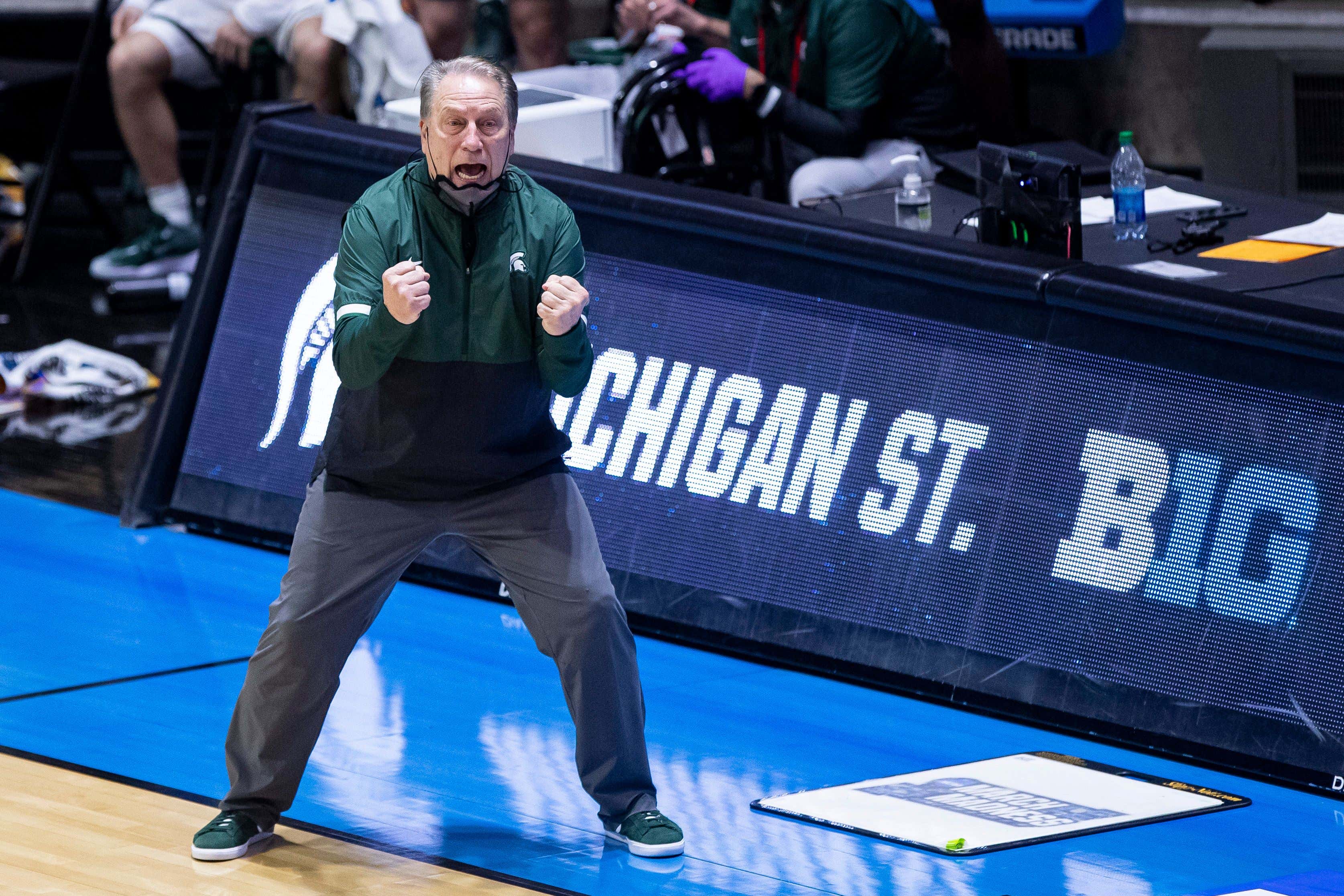 When Indiana closed out the 2020-21 season with six straight losses, few were surprised that they moved on from former head coach Archie Miller. Zero NCAA Tournament berths and an 0-8 record against rival Purdue meant the end of the road for this era of Hoosier Hoops. Enter Mike Woodson, where there are certainly pros and cons that come with this new hire. The Indianapolis native won a B1G Title under Bob Knight with the Hoosiers, and has success as an NBA head coach with the Hawks and Knicks. But on the flip side, Woodson has zero college basketball coaching experience. The focal point of this team is Trayce Jackson-Davis, who is going to be one of the best players in both the conference and the country. Getting Jackson-Davis to stay in Bloomington and re-buy into the new era of this program was a huge move in the Hoosiers’ favor. Race Thompson started all 27 games last season and is back on the team, while Pittsburgh transfer Xavier Johnson and junior Rob Phinisee will be the meaningful guards on this team. 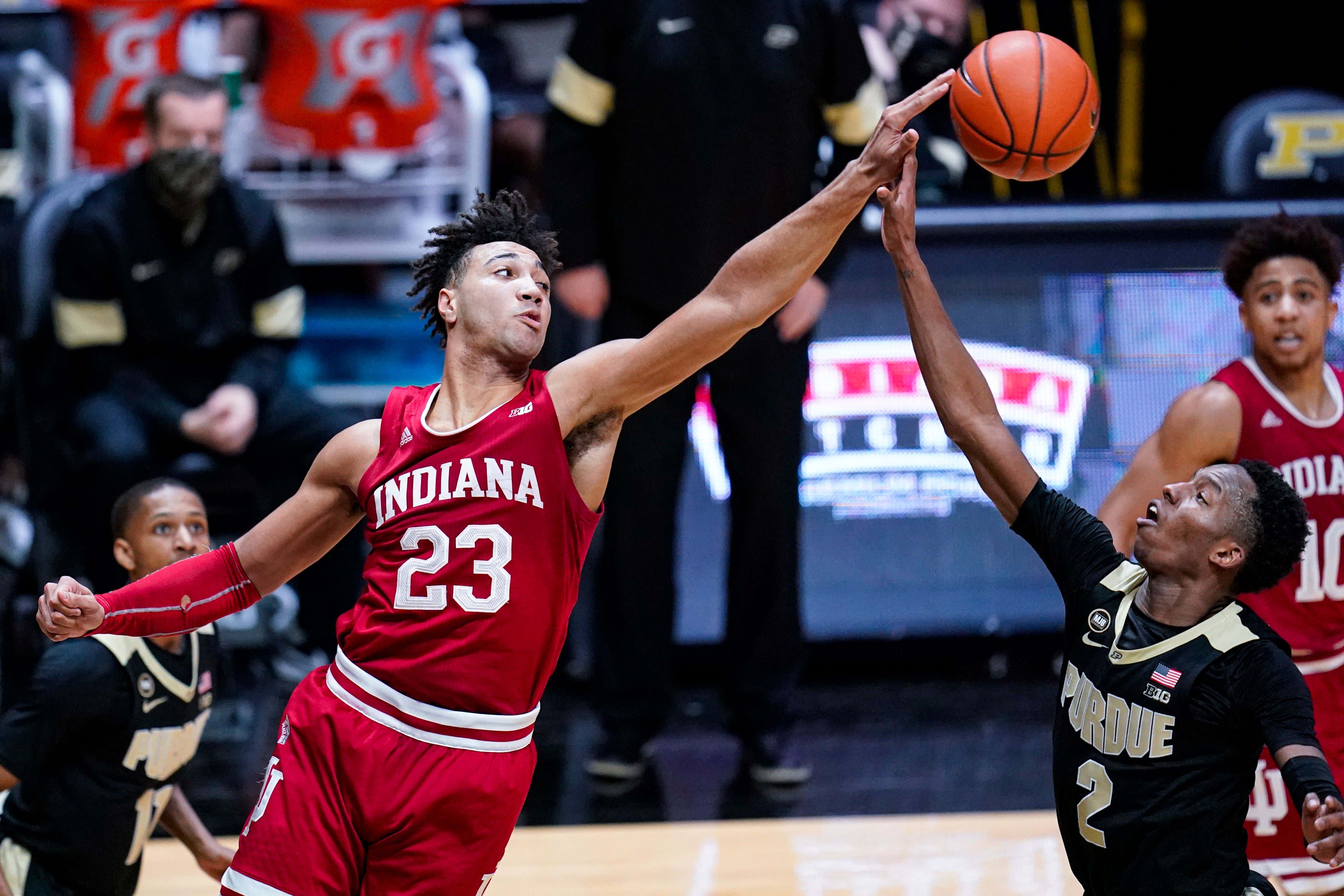 Rutgers returned to the NCAA Tournament for the first time since 1991 last March. Now, Coach Pikiell hopes to make that Big Dance ticket the norm in New Jersey. Fortunately, the core backcourt duo of Geo Baker and Ron Harper Jr. return this season to lead the way. Fellow veterans Paul Mulcahy and Caleb McConnell are still around too, while big man Cliff Omoruyi is the key to taking this Scarlet Knights team to the next level if he can take the next step. Rutgers was last in the B1G in free throw % and second to last in 3PT%. They’ll need to fix both of those numbers to have a chance at a deep March run. 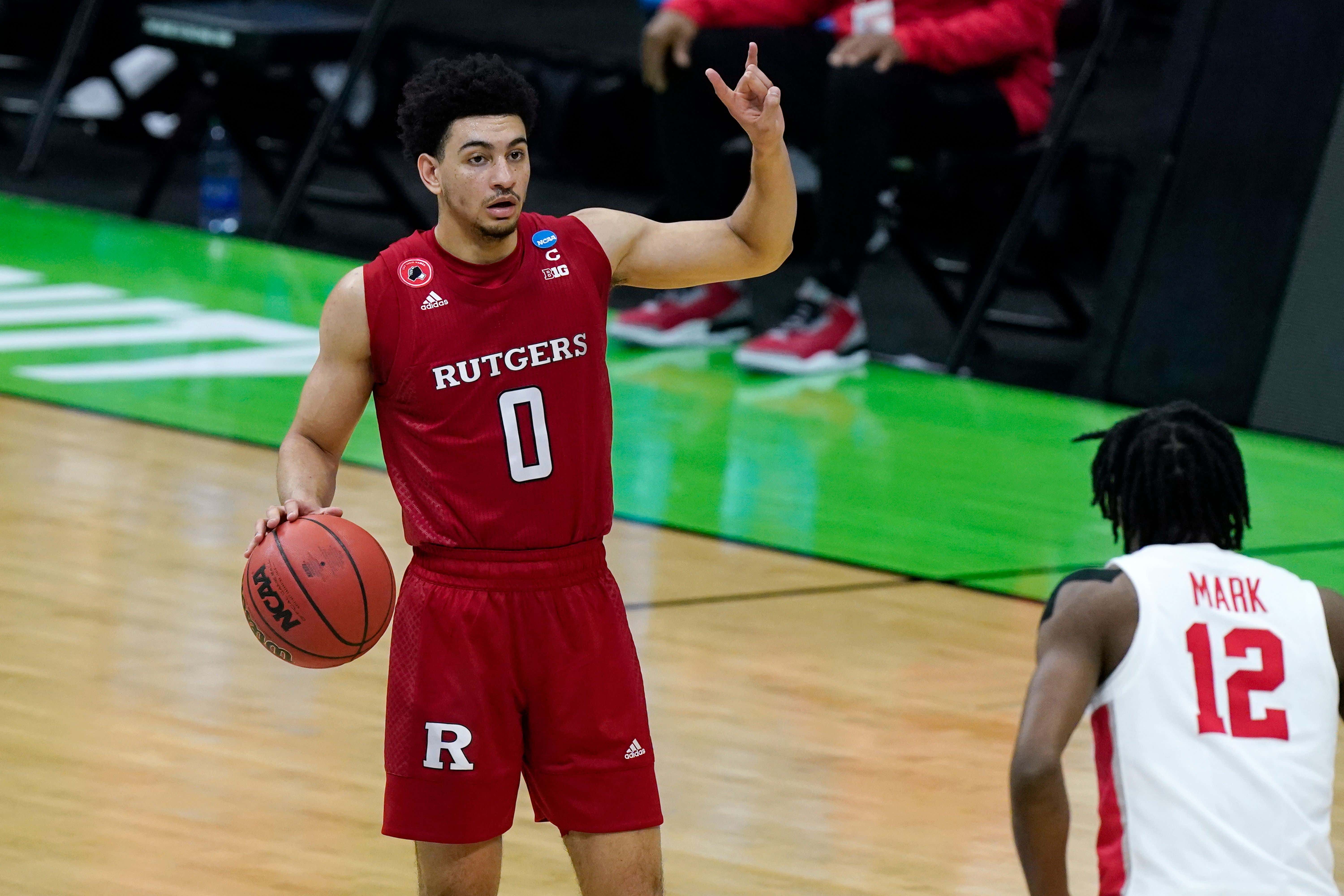 To nobody’s surprise, Iowa is expected to struggle after the departure of Luka Garza. FOTP Jordan Bohannon is ready to play the villain role against the NCAA for one final season, and his hot shooting will be enough to keep the Hawkeyes in plenty of games. Connor McCaffery also returns, but aside from that, it’ll mostly be underclassmen on the floor for Iowa. But Keegan Murray, Patrick McCaffery, and Joe Toussaint are guys who were around that great team last year, and it’ll be up to them, among others, to bring the Hawkeyes back to the NCAA Tournament.  The defense struggled big time last year, so that identity will have to change for a better season. 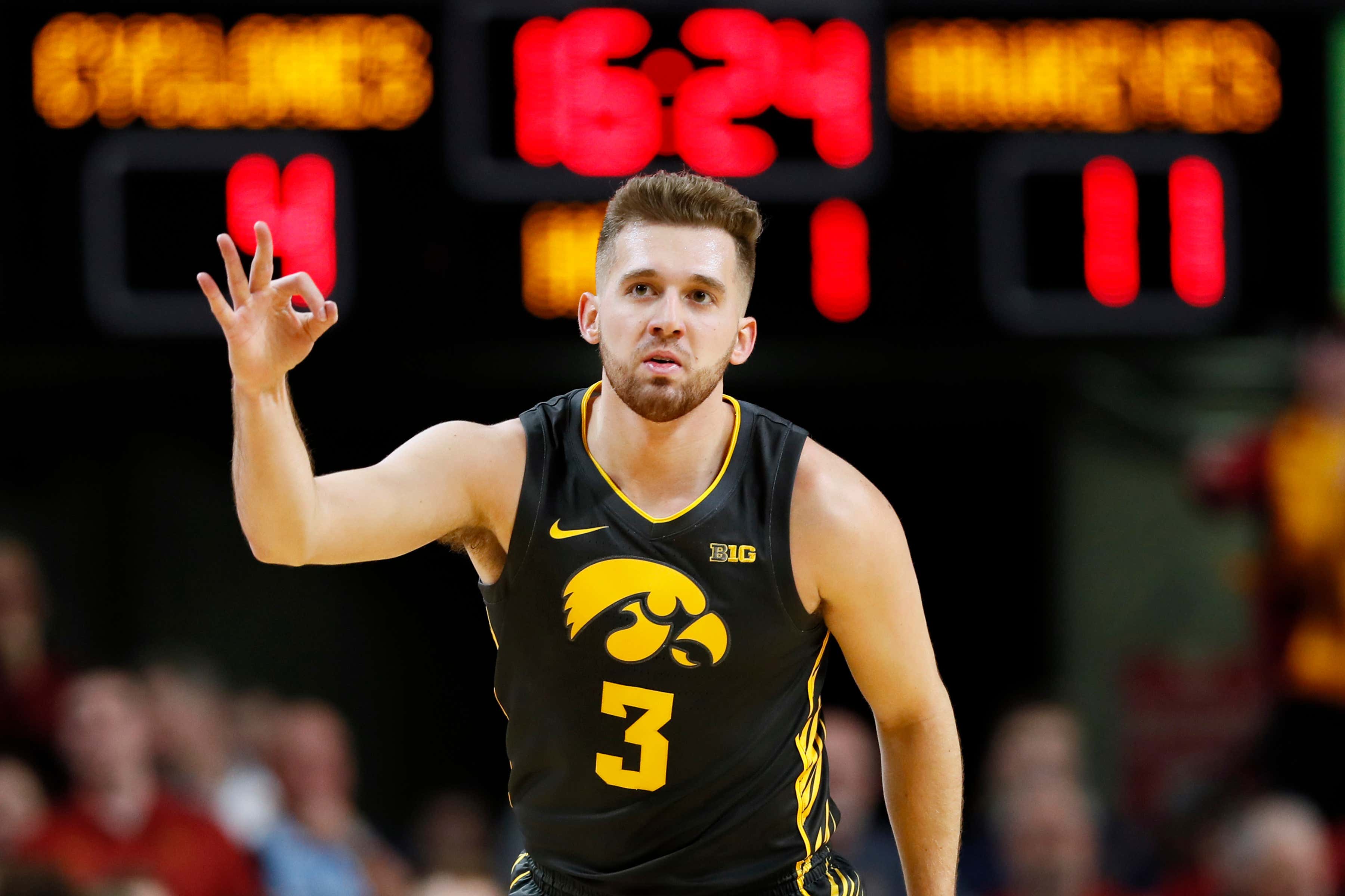 There are 14 scholarship players on this year’s Wisconsin team, and of those 14, ten are classified as freshmen. That is the opposite of the identity that the Badgers had last year, which featured a team that had four fifth-year seniors on it (and a lineup that was older than the Chicago Bulls). This year’s team starts with Brad Davison, who once again returns as the most familiar face on this Badgers team. The veteran has posted more points, rebounds, assists, 3-pointers, and steals in a Wisconsin uniform than the rest of his teammates combined. There is a lot of optimism about sophomore Jonathan Davis, while Tyler Wahl returns for his junior campaign. If freshman Chucky Hepburn can make an immediate impact at the point, the Badgers might be a surprise team in the B1G. As for the big man spot, Cincinnati grad transfer Chris Vogt and 7-footer Steven Crowl look to protect the paint in Madison. 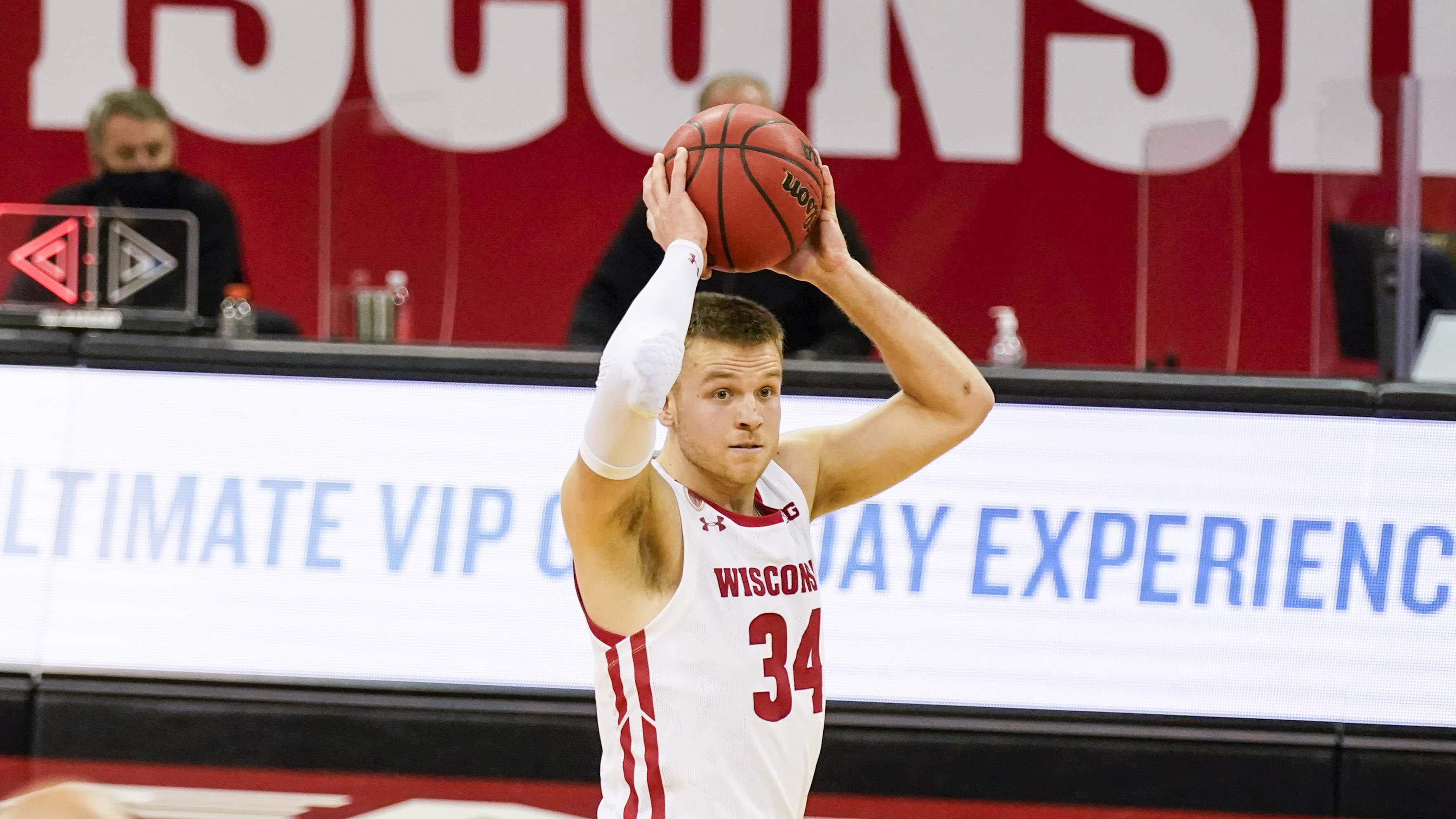 14 wins in two seasons certainly is not how anyone saw the Fred Hoiberg era in Lincoln starting off. Fortunately, the first five-star recruit in school history is here to try and save the day in Bryce McGowens. Fellow freshman Wilhelm Breidenbach (sounds like a 1700s scientist) and his goggles will probably make him some cash via NIL, and Arizona State grad transfer Alonzo Verge Jr. will have a major impact on this year’s team. The pieces are there, but the expectations are still not too high for Nebraska heading into the season. 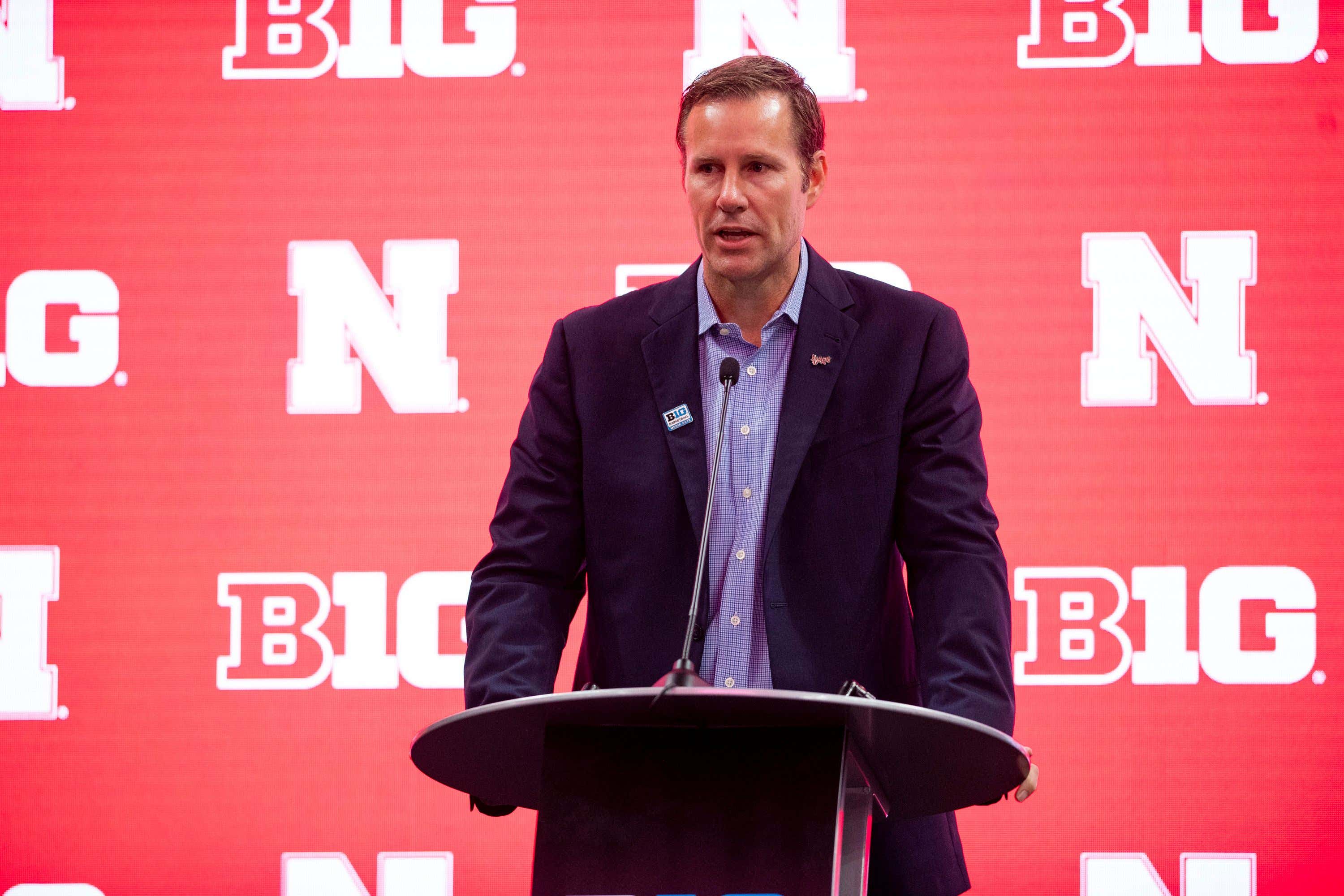 There hasn’t been much for Northwestern fans and journalism alumni to get excited over since the team’s tournament win in 2017. But the way Chris Collins is grooming this year’s Wildcats is similar to that magical team in terms of total minutes played. Guard Boo Bouie has the chance to be one of the best guards in the league, and showed flashes of it early in conference play last season. Pete Nance, Chase Audige, and transfer Elyjah Williams will hope to take their experience and climb out of the B1G basement this season. 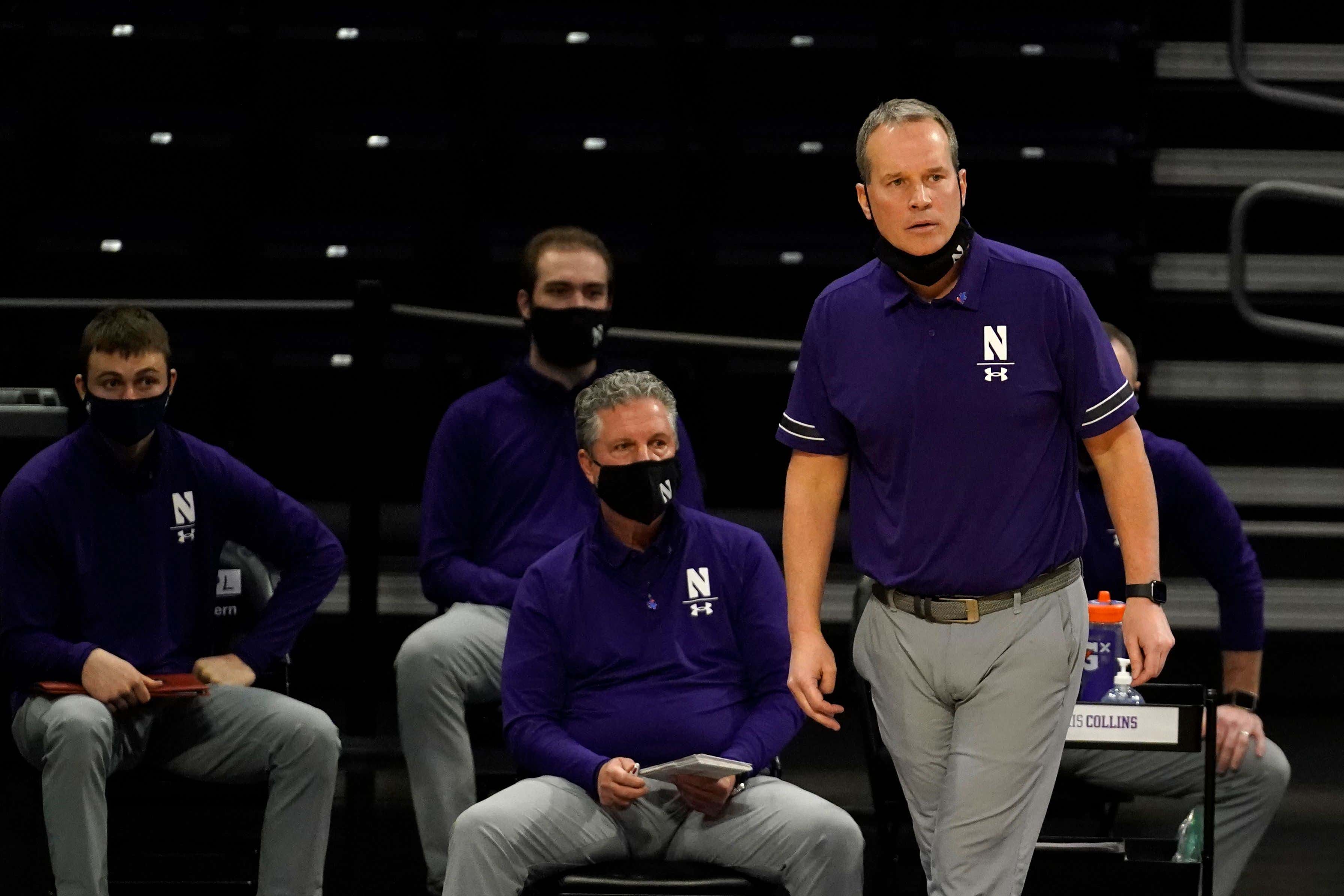 The Penn State program’s messiness with former head coach Pat Chambers caused six players to leave the program. Now, it’s a new chapter with Micah Shrewsberry, who has spent time as an assistant with Matt Painter and Brad Stevens. Seth Lundy is the team’s top returning scorer, and Sam Sessoms was a spark plug off the bench last season will play a bigger role this time around. John Harrar and Myles Dread are a pair of seniors who hope to be the foundation of this rebuilding year with the Nittany Lions. 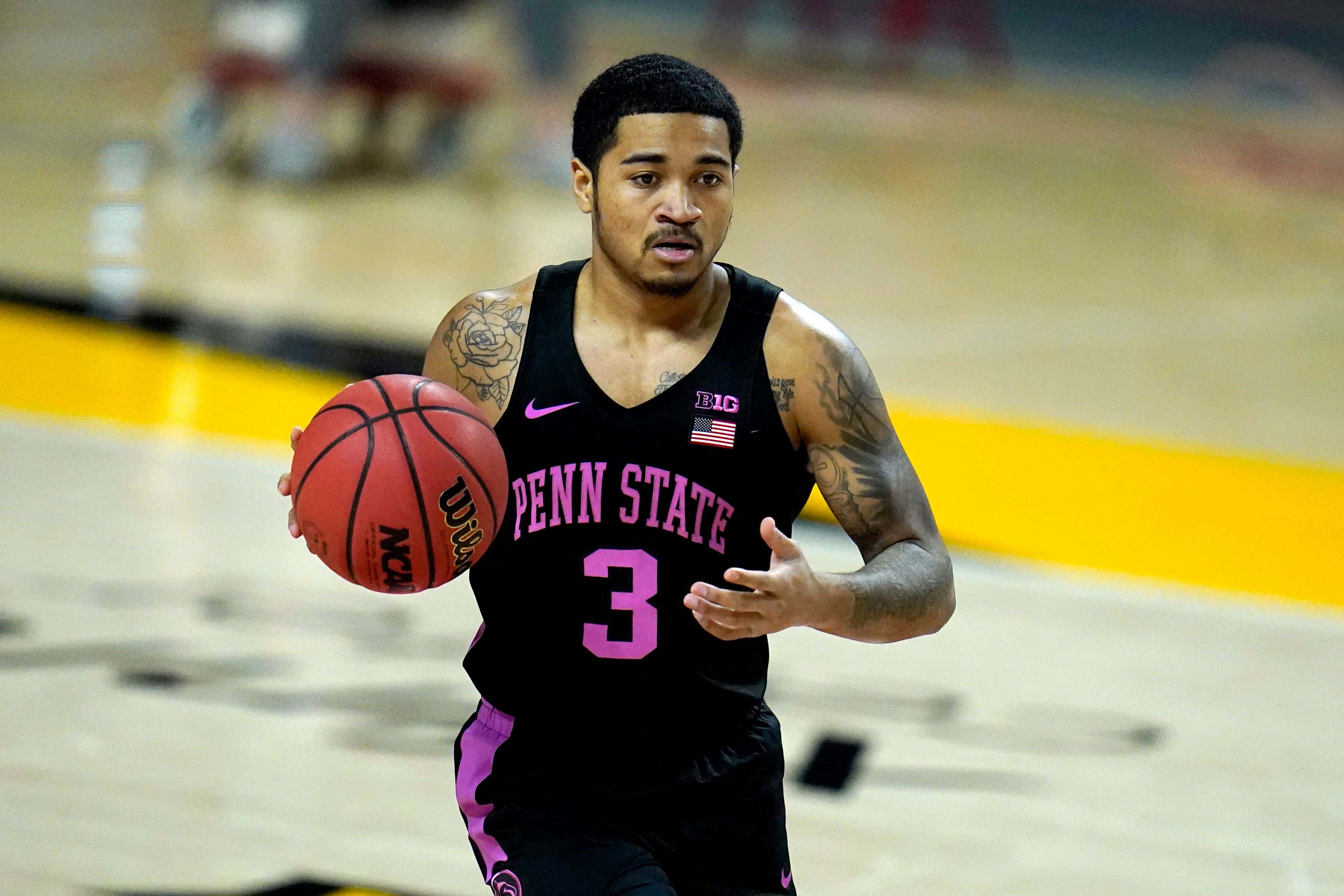 The Minnesota basketball program is basically starting from scratch. Former head coach Richard Pitino was fired, and all five starters from last season are out the door as well. In fact, just one player initially decided to stay at Minnesota after everything went down: Isaiah Ihnen, and unfortunately, he is out for the season with a knee injury. This is a team full of transfers that haven’t played with each other before, but it’ll make for an interesting task for first-year head coach Ben Johnson. 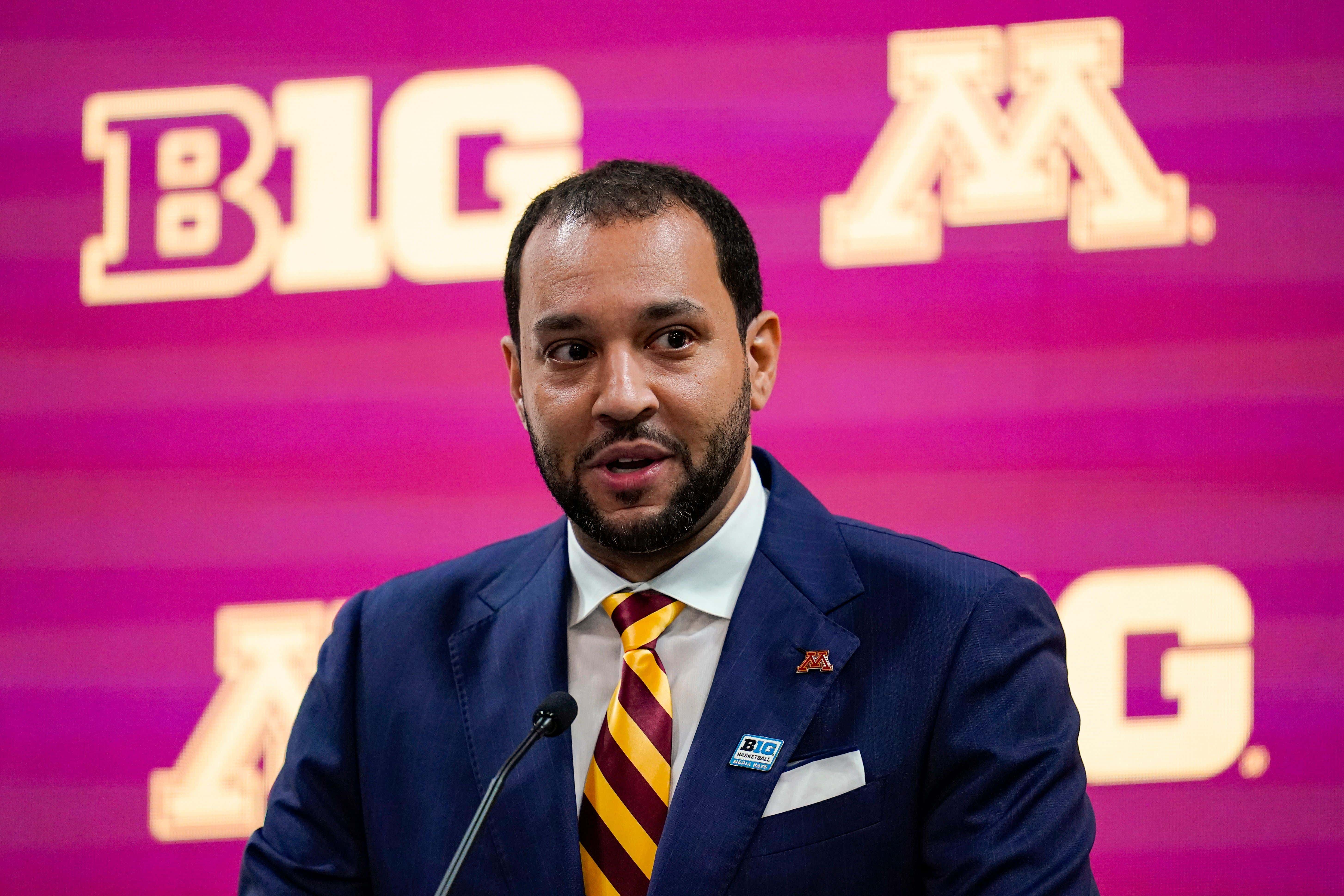 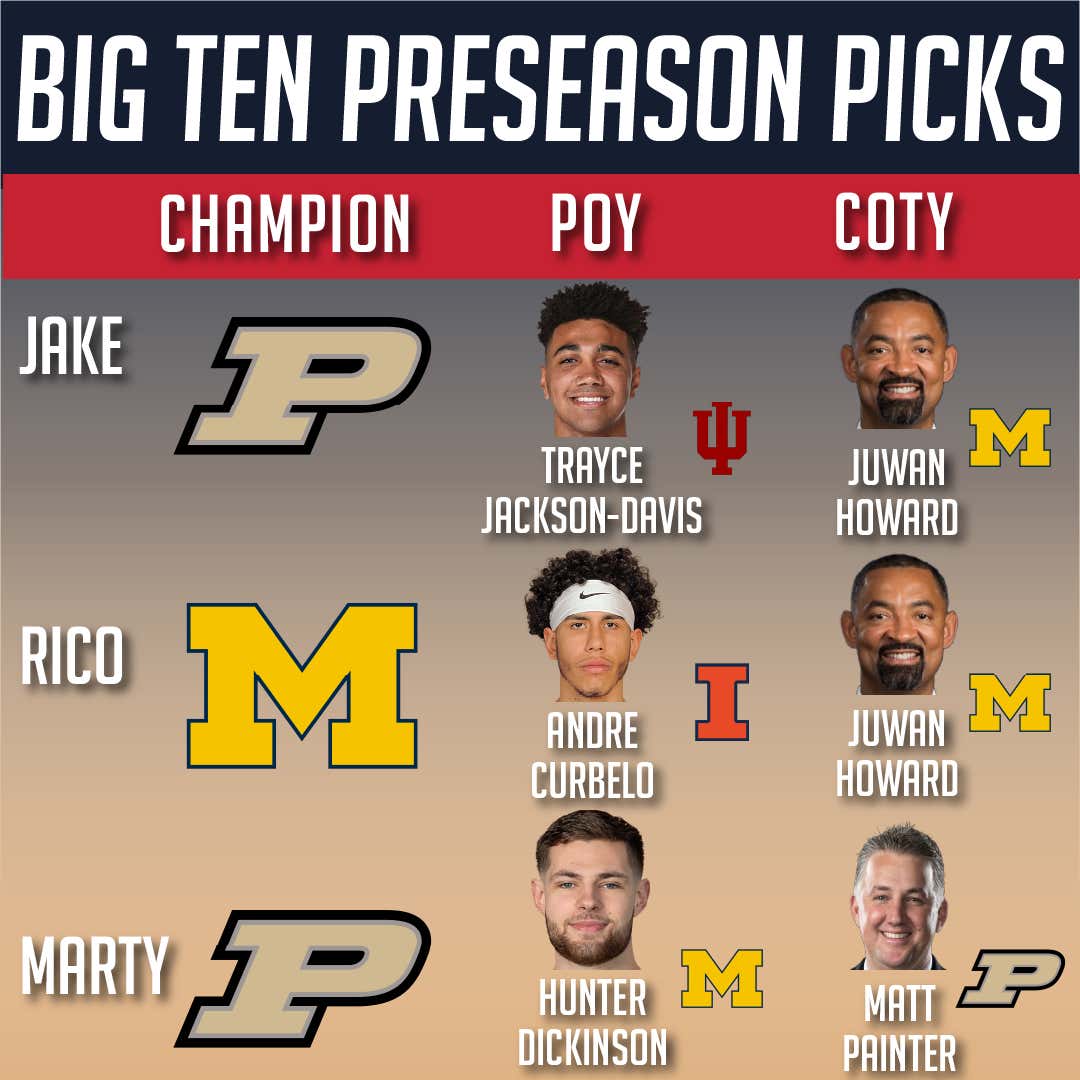 Do you agree with any of our picks? Who got left off the list? We also previewed the SEC on this week's show, and next week, we will hit on the Pac-12 and the smaller conference teams + mid-majors. 12 days until tip-off!