The SEC seems to live and die by football season, but now is the chance to hop on board the conference's basketball teams. I can't remember a season where there have been this many good teams in the conference that includes so many great players and coaches with big personalities, but that's exactly what we have here. Kentucky is expected to return to their usual form after a horrific season a year ago, Arkansas and Alabama are ready to aim for the top spot once again, while Tennessee, Auburn, Florida, LSU, and Mississippi State all can make the NCAA Tournament, too.

To say Kentucky basketball had a down year last season would be a major understatement. The Wildcats were never in a good spot since the jump, as proven by their 1-6 start to the season in non-conference play. Coach Calipari says the dissapointing season was "on him," and not any staff members or players. This year's Kentucky team is once again expected to win the SEC Regular Season Title, and the Wildcats will have plenty of options on the court. Four transfers with a combined 265 games of experience, a pair of five-star recruits (TyTy Washington and Daimion Collins, plus four-star Bryce Hopkins), and a handful of returnees gives Coach Cal the ammo to not only have a huge turnaround season, but a real chance to get back to the Final Four. 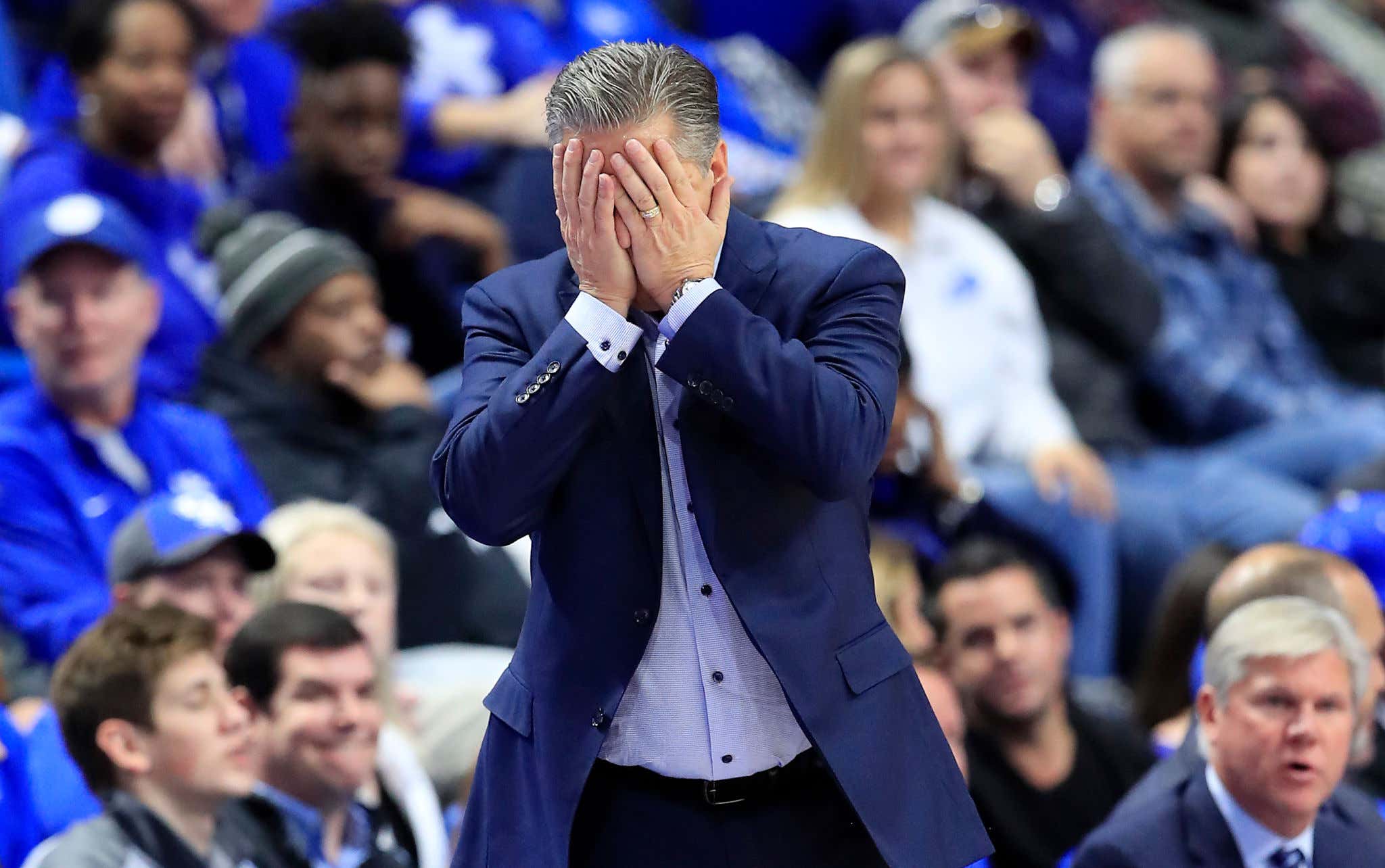 The way Alabama's season ended back in March was a wacky rollercoaster ride. The Crimson Tide went way above their preseason expectations, won both the SEC regular season title and tournament, and then made it to the Sweet 16. That game against UCLA in itself was an up-and-down ride, from the missed free throws, to the buzzer beater to force OT, and then the eventual loss to the Bruins. But this year's Alabama team certainly has what it takes to go much farther than just Round 3 of the NCAA Tournament. Jahvon Quinerly is ready to take over as one of the best players in the SEC, while Jaden Shackelfrd and Keon Ellis are other key returnees. 5-star freshman JD Davison and Furman transfer Noah Gurley will have major impacts as well. There is no doubt that this team will score and make their threes, as they did last season. Can they get the other pieces to work and make a run at the Final Four? 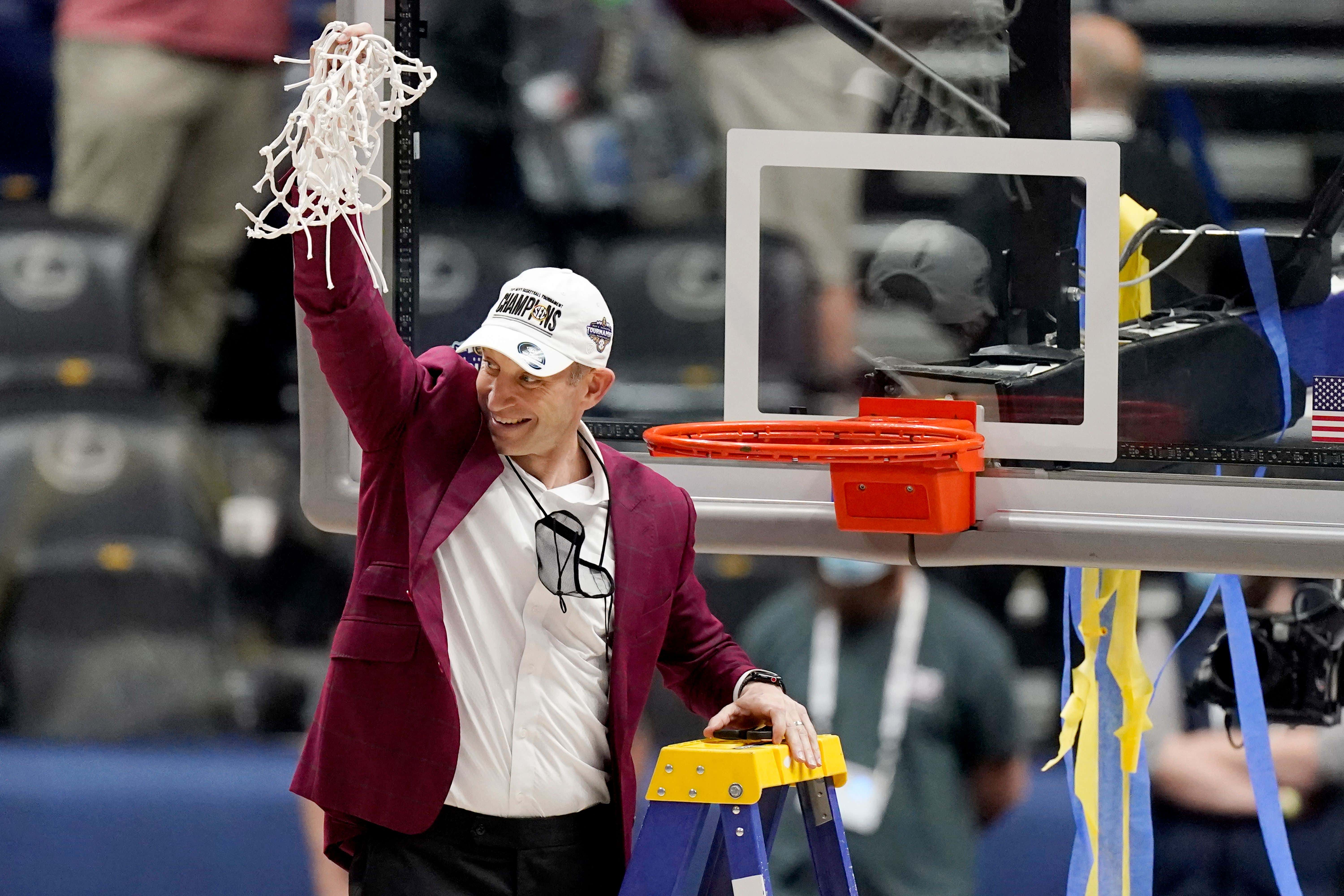 Arkansas was one of the most active teams in the entire country this offseason when it comes to the transfer portal. There are six new Razorbacks with the team this year via the portal, including Chris Lykes (Miami), Stanley Umude (South Dakota), Au’Diese Toney (Pittsburgh), and Trey Wade (Wichita State). SEC Sixth Man of the Year JD Notae returns in addition to Davonte Davis, Jaylin Williams, and Connor Vanover. There is no shortage of depth on this team, and the "Muss Bus" will be loaded this season. When our crew watched their practice over the summer, it was crazy to see the intensity shown by everyone involved. Coach Muss noted that he and his staff focused more on the portal rather than recruiting, simply because of the fact that due to COVID, they couldn't go out and meet with recruits. When you have established D-I players on tape, that's a valuable route to take as well. And we will see this season how much it has paid off. 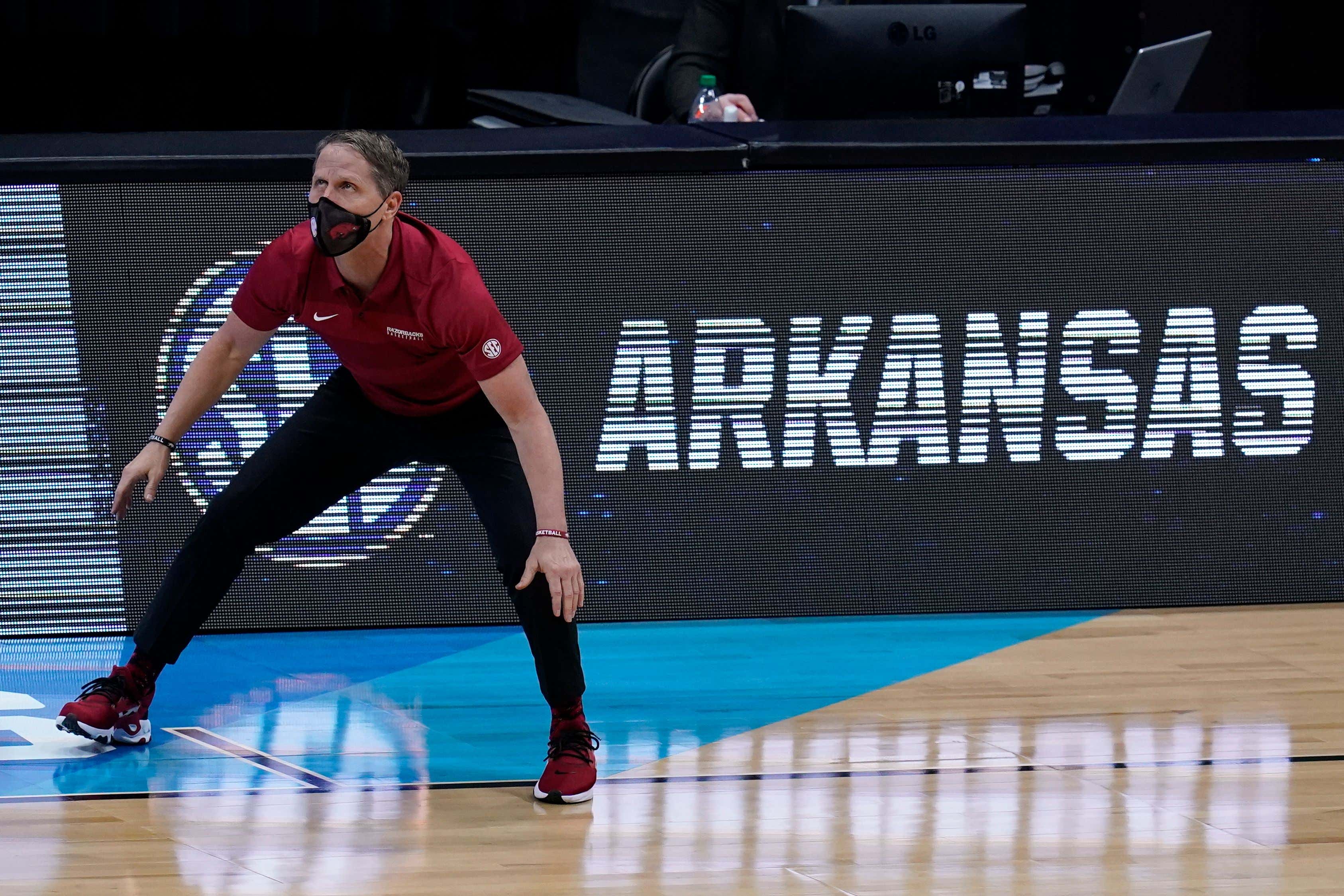 It was a tough start to the offseason for Rick Barnes, that included losing two assistant coaches, three players to the NBA Draft, and four guys via the transfer portal. John Fulkerson returns as a grad student as a man on a mission, who has his season cut short due to a facial fracture and concussion in the SEC Tournament. He is 24 years old and returning for his sixth season.The No. 1 point guard in the Class of 2021 is Kennedy Chandler, and he now calls Knoxville home. He is a 5-star from Memphis, one of two 5-stars on the team (Brandon Huntley-Hatfield). Victor Bailey Jr, Josaih-Jordan James, and Santiago Vescovi are all returning faces to a team that could lean on veteran faces in order to make a deep run, too. 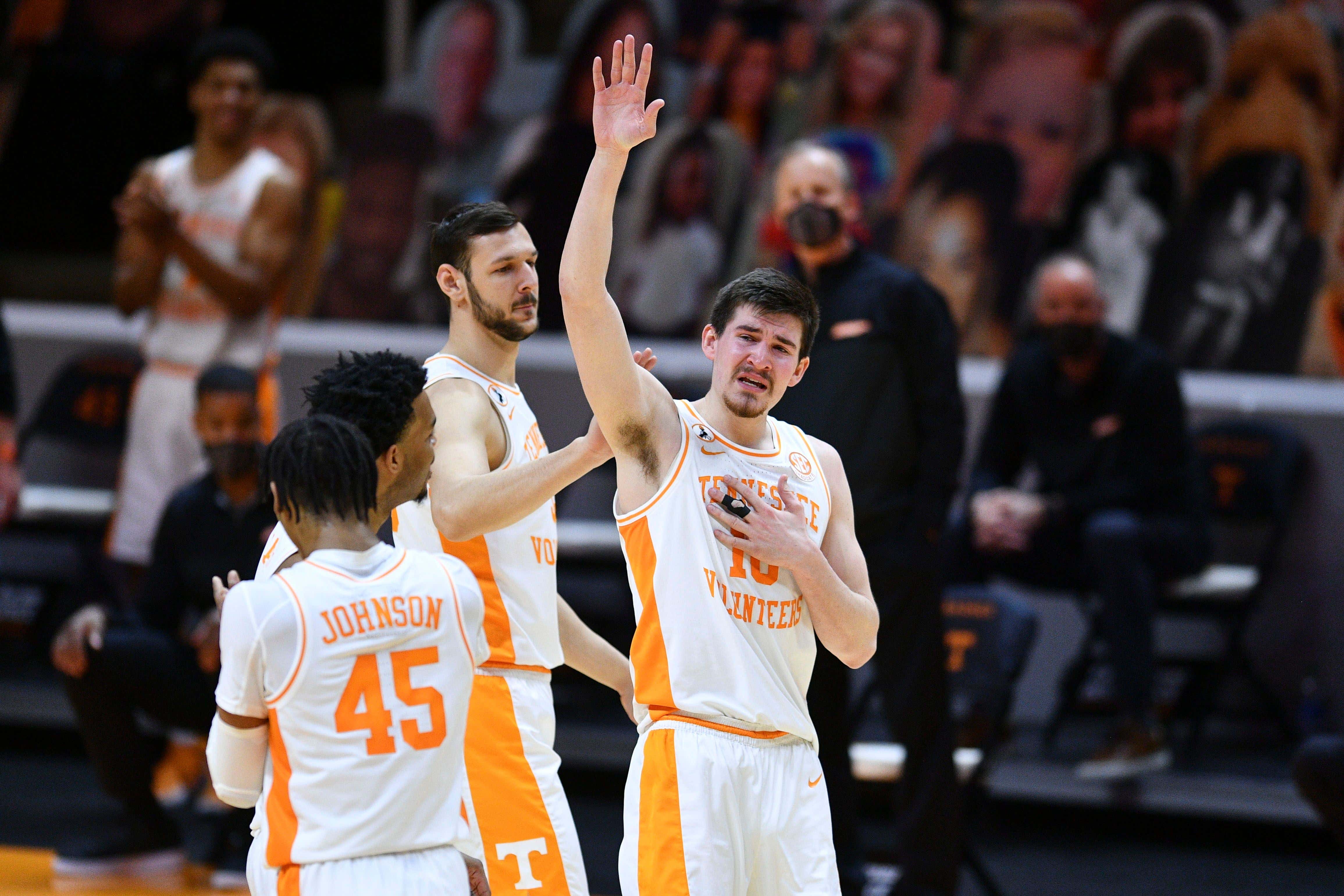 A self-imposed postseason ban put a dark cloud over last year’s Auburn Team, which still finished under .500 anyways. Sharife Cooper was a stud guard, but he entered the NBA Draft. 5-star freshman forward Jabari Smith Jr., North Carolina transfer Walker Kessler, and Georgia transfer K.D. Johnson will be the core of this year’s team. Expect Auburn to be one of top rebounding teams in the country and one of those under-the-radar teams in the SEC. 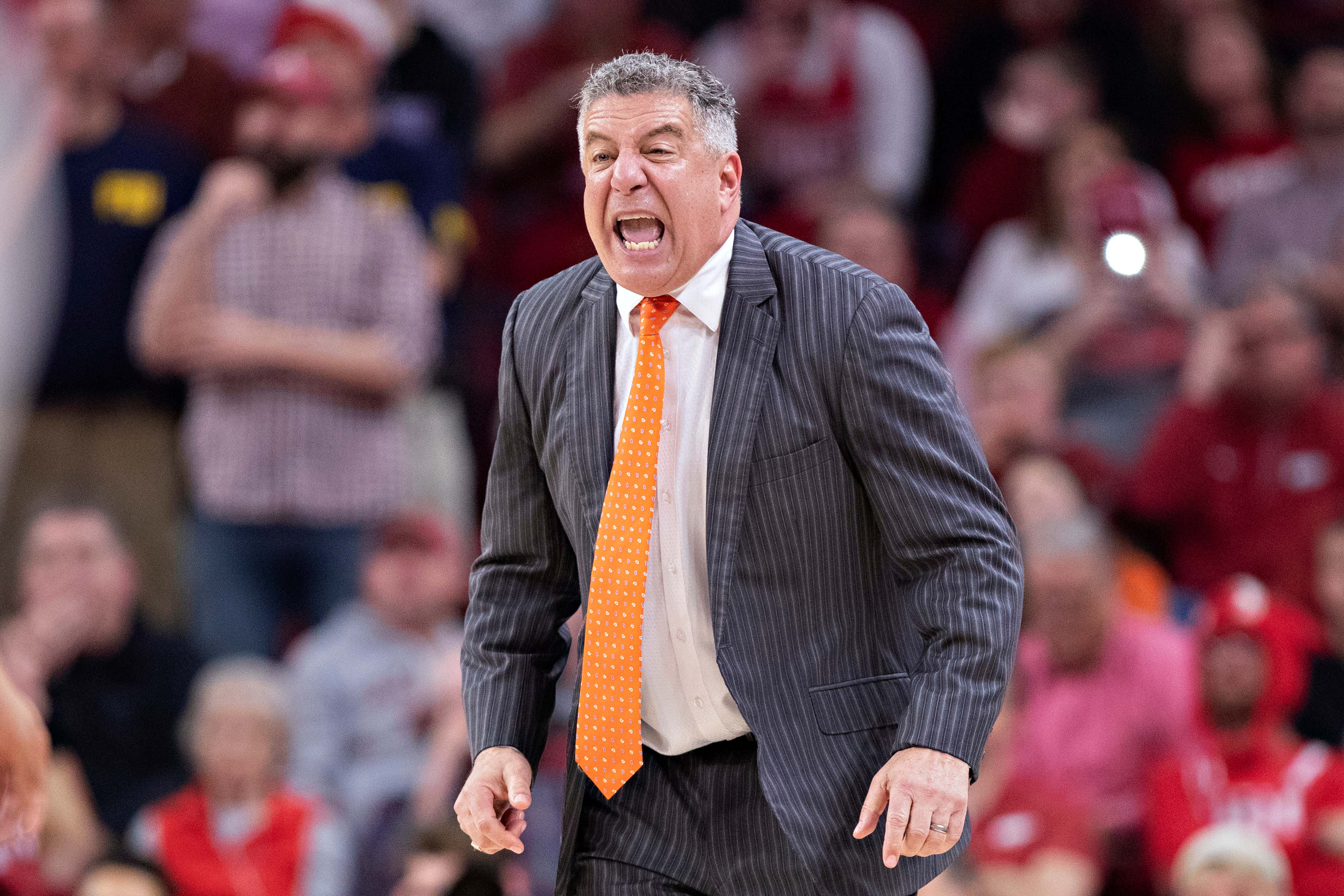 After losing to Michigan in the NCAA Tournament’s Round of 32 largely thinks to the Wolverines’ Hunter Dickinson, LSU HC Will Wade knew he needed a big man of his own. Enter Efton Reid, a 7-0, five-star recruit, and the No. 4 center in the Class of 2021. Darius Days is expected to be one of the best forwards in the SEC and will be the go-to guy for the Tigers this season. Unfortunately, LSU suffered a bad break when it comes to injuries already. Illinois transfer Adam Miller is out for the year with a torn ACL. Missouri transfer Xavier Pinson has worked hard to gain consistency with his shooting stroke during the offseason. The Tigers lose a ton of production from last season, but have the personnel to find their way to another NCAA Tournament. 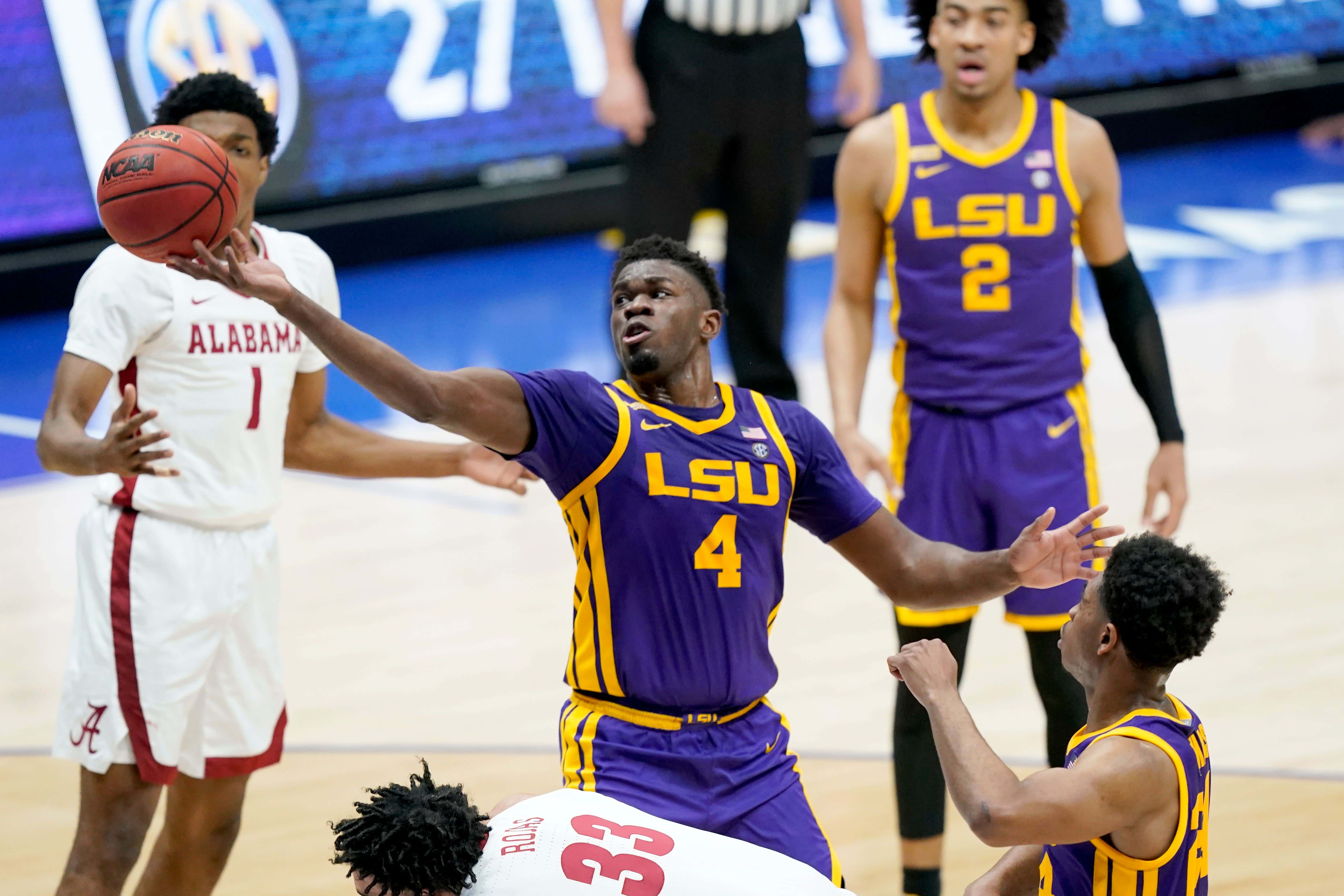 The fact that the Gators not only made the NCAA Tournament, but won a game in The Big Dance is very impressive, considering that SEC preseason Player of the Year Keyontae Johnson was out for the year after collapsing on the court against Florida State. As for this season, the return of Johnson remains in question. But the Gators do return three starters, including 6-11 star forward Colin Castleton. Tyree Appleby and Anthony Duruji are also back, while the Gators are also bringing in solid pieces via the transfer portal. Myreon Jones (Penn State) and a pair of grad transfers (Brandon McKissic and Phlandrous Fleming, Jr.) add experience to this Florida roster that will lead the way for freshman Kowacie Reeves, who might be the best kept secret in the SEC heading into the season. 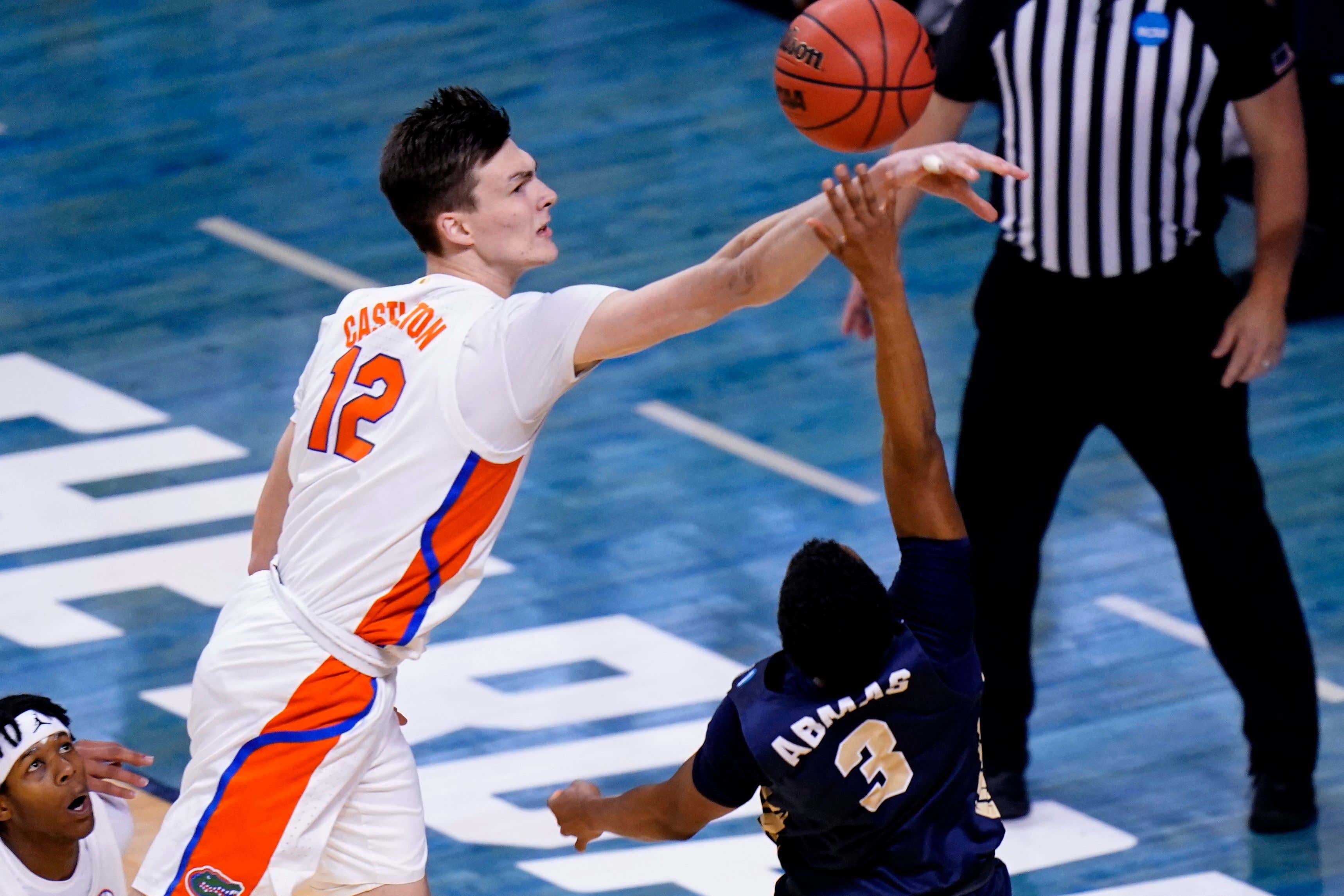 Mississippi State has a case to be the most underrated team in the SEC entering the season. A big reason for that is the experience on this year’s version of the bulldogs. Coach Howland returns three starters in addition to a very big haul via the transfer portal. Iverson Molinar is expected to take another big jump, while Rocket Watts (Michigan State), Garrison Brooks (North Carolina), and D.J. Jeffries (Memphis) are among the new faces with experience that can potentially lead this team to the NCAA Tournament. 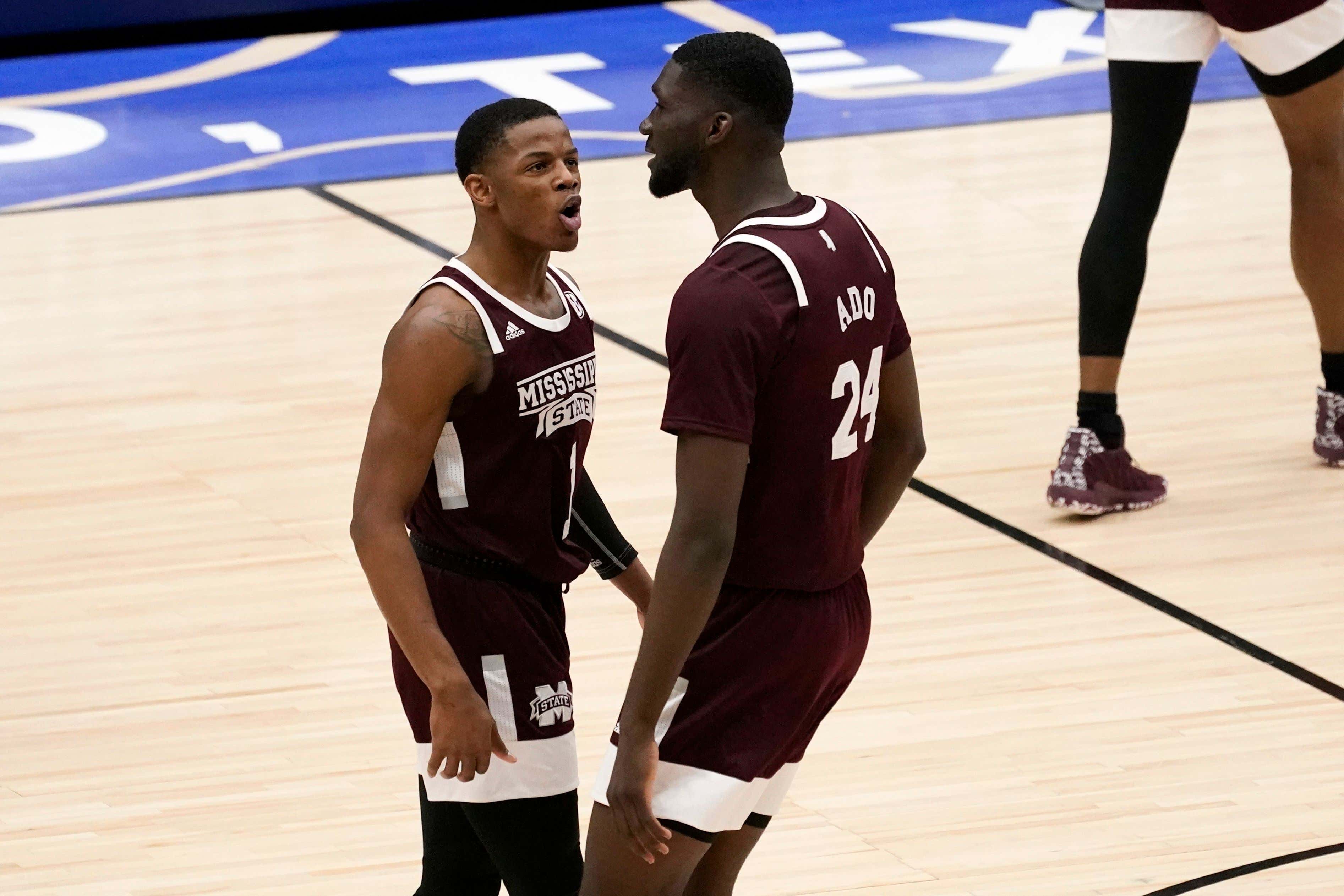 Seven newcomers joining this year’s team in Oxford presents a lot of uncertainty. Ole Miss’ defense was awesome last season (No. 25 nationally), but their shooting from deep range was far from that (312th nationally). Transfers Jaemyn Brakefield (Duke) and Nysier Brooks (Miami) join a squad that will most likely be led by Oxford native Jarkel Joiner, and four-star recruit Daeshun Ruffin. 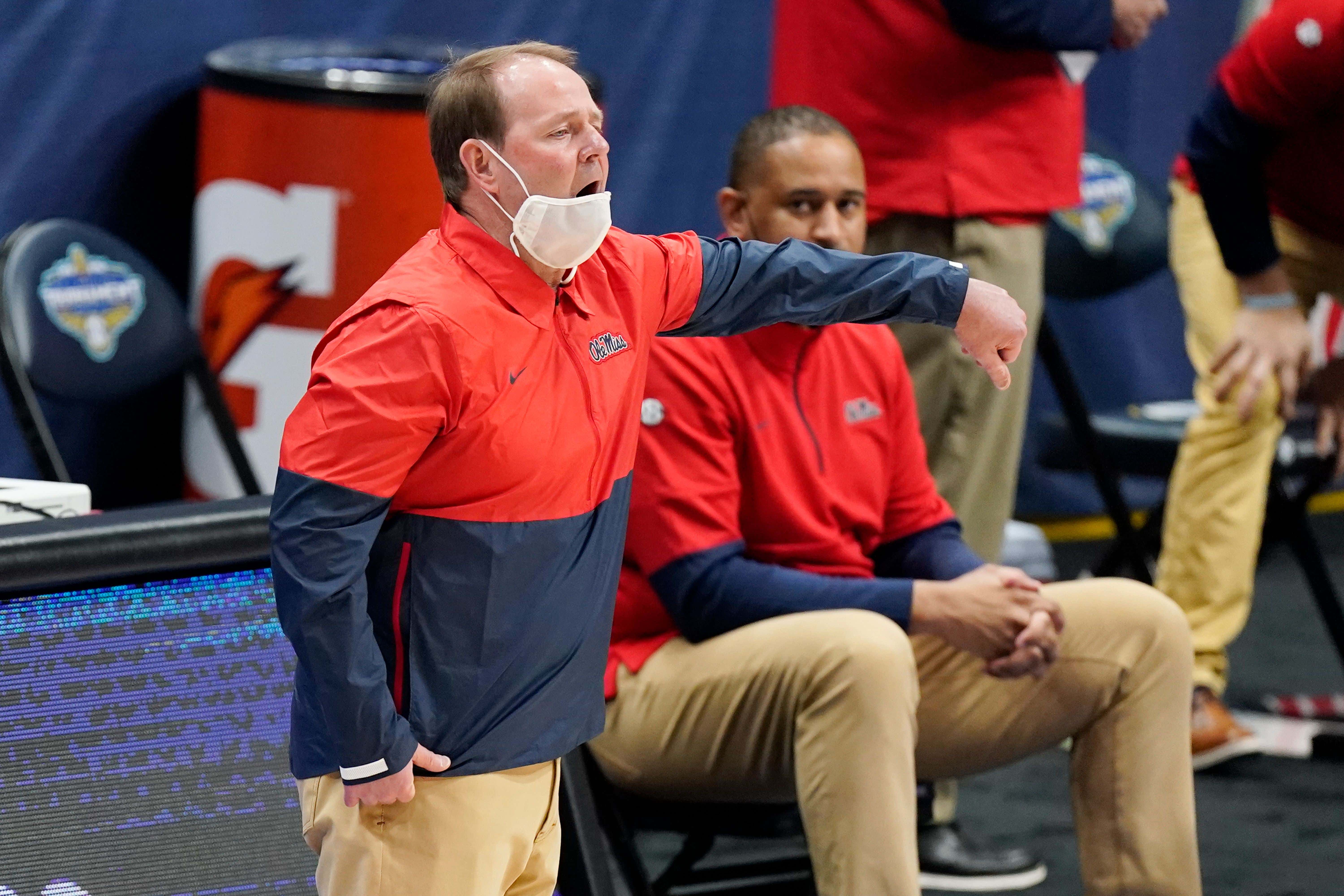 Missouri comfortably made the NCAA Tournament last season, thanks to being one of the most experiences teams in college basketball. Now, the bulk of that group is gone, making it a steep road ahead for the Tigers. Kobe Brown was one of three players to start in all 26 games last year, and the team will most likely go through him. The expectations on this year's team aren't nearly as high a season ago, but maybe less pressure will result in more wins. 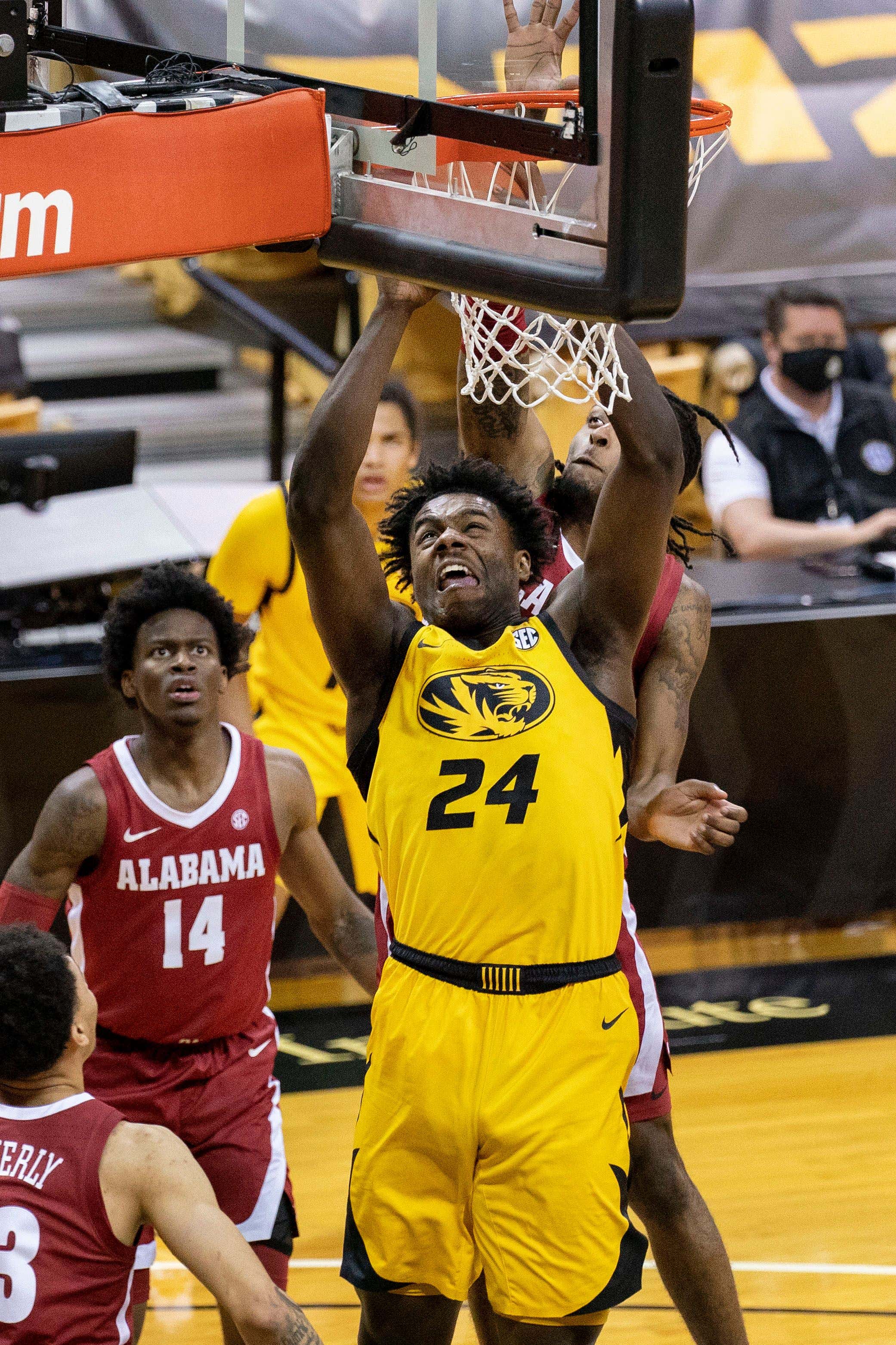 Frank Martin is a fantastic head coach and took the Gamecocks to the Final Four out of nowhere back in 2017. But since then, there has been no postseason for South Carolina aside from the SEC Tournament. With a coach like that, beating the Gamecocks will never be easy. Significant returnees include Keyshawn Bryant and Jermaine Couisnard, who zigged while eight other former teammates zagged this offseason and left the program. 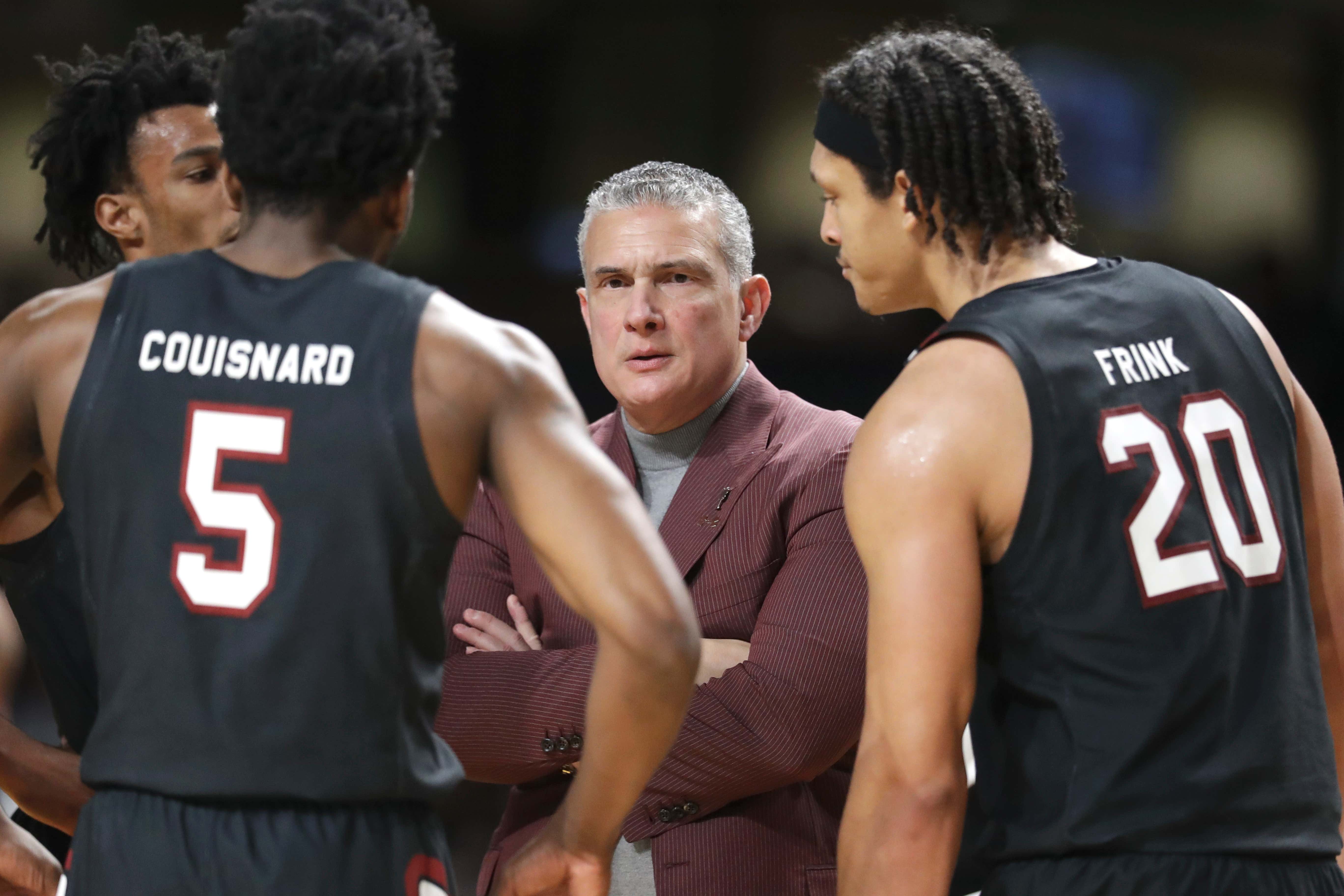 Any college basketball fan knows how good of a coach Buzz Williams is. He did great things with Marquette, took Virginia Tech to the Sweet 16 in 2019, and now has his work cut out for him in College Station. The biggest strength on this team will be its backcourt, which includes Quenton Jackson and Andre Gordon. 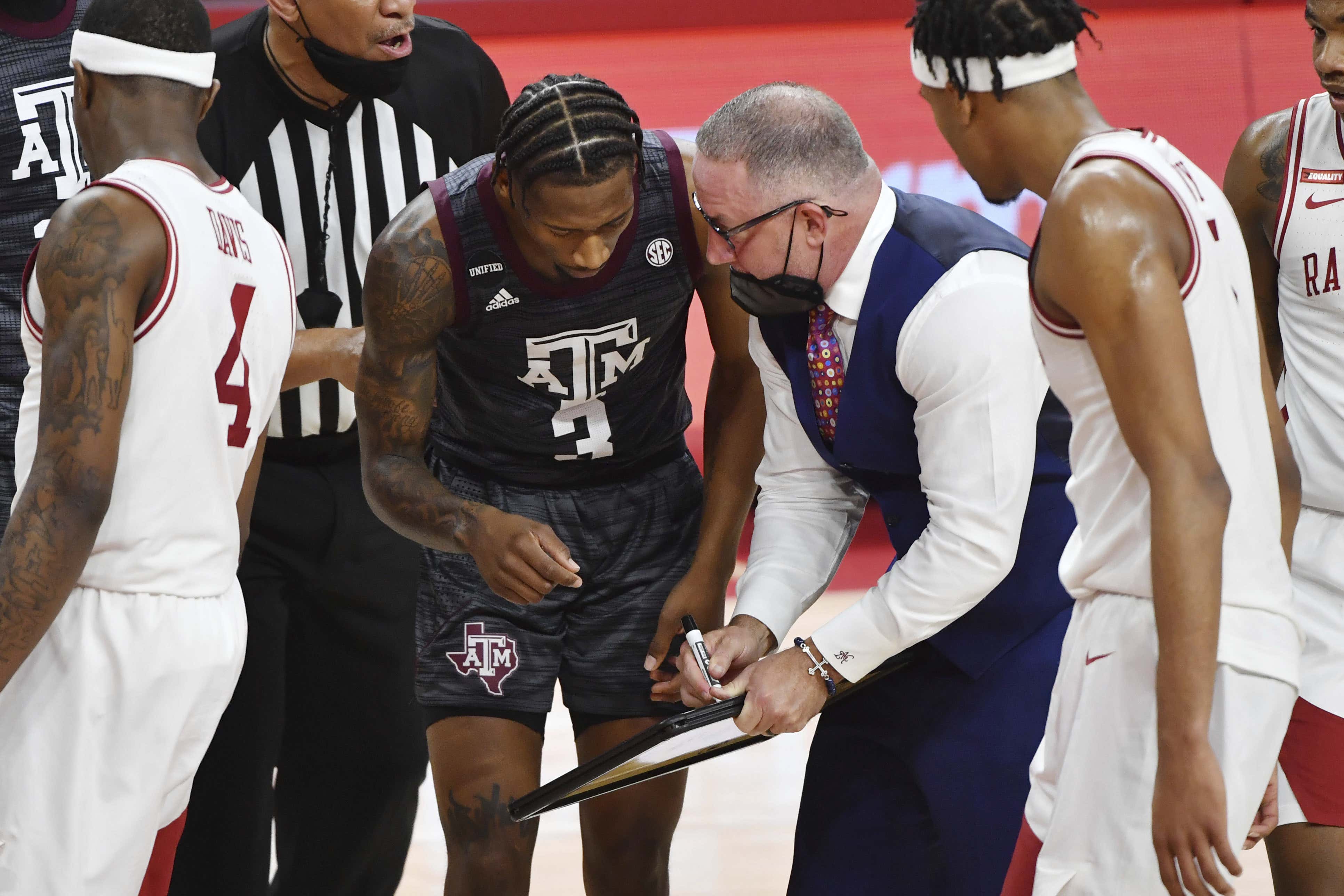 The bad news? Vanderbilt has found a familiar home towards the bottom of the SEC over the last few years. The good news? Scottie Pippen Jr. is returning to Nashville to hopefully change the identity of Jerry Stackhouse's Commodores. Throw in a big man in Minnesota grad transfer Liam Robbins and Dayton transfer Rodney Chatman, and Vanderbily actually has a handful of solid pieces heading into this season. 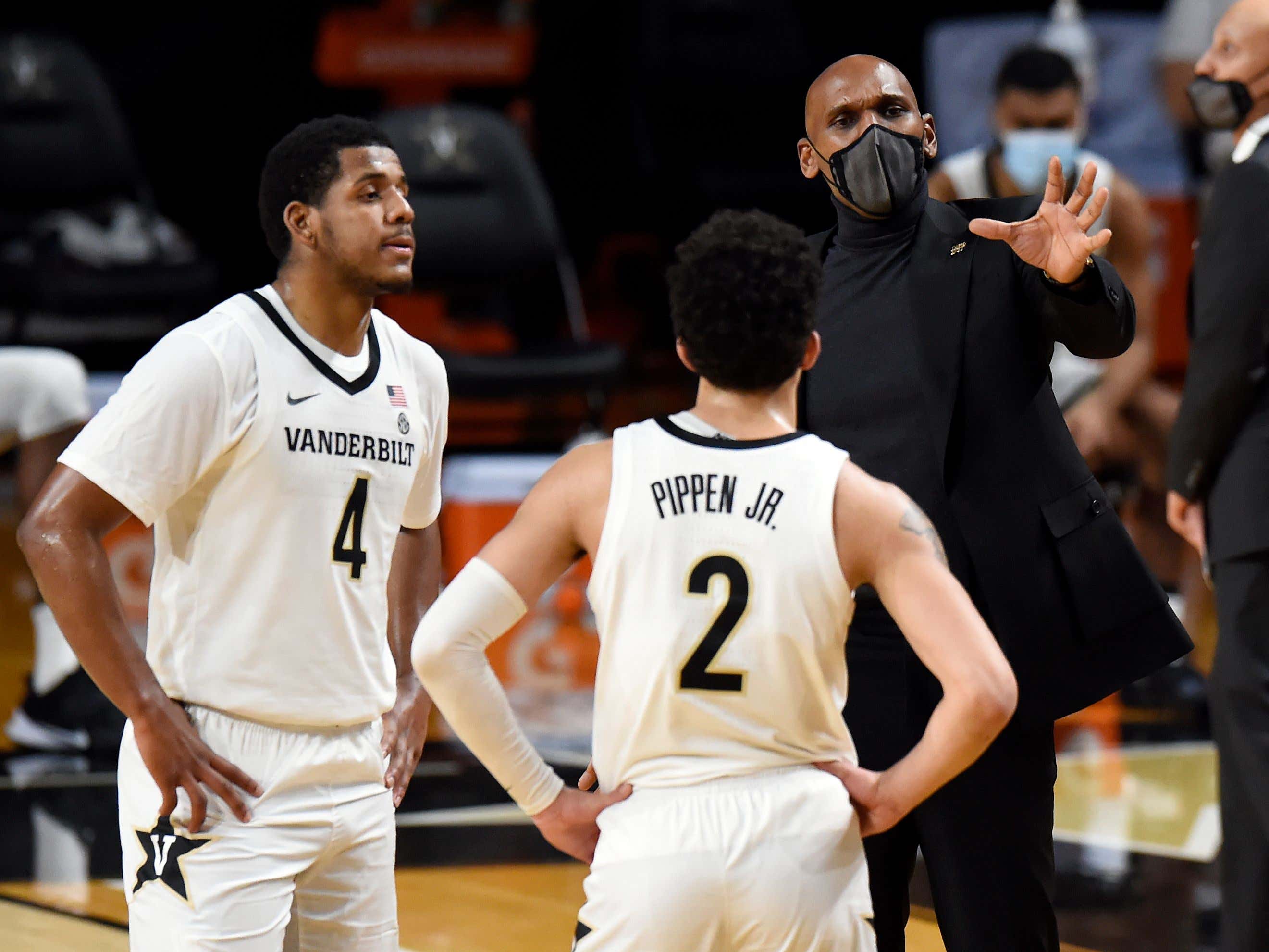 Since 2017, 13 of the 14 teams in the SEC have made the NCAA Tournament. The one that hasn't resides in Athens, and Tom Crean hopes to change that this season. Top scorers Sahvir Wheeler (Kentucky) and K.D. Johnson (Auburn) have left Georgia, but stayed in the SEC. It'll be a pair of super senior transfers in Jailyn Ingram (FAU) and Aaron Cook (Gonzaga) to pull off some upsets for Georgia this season. 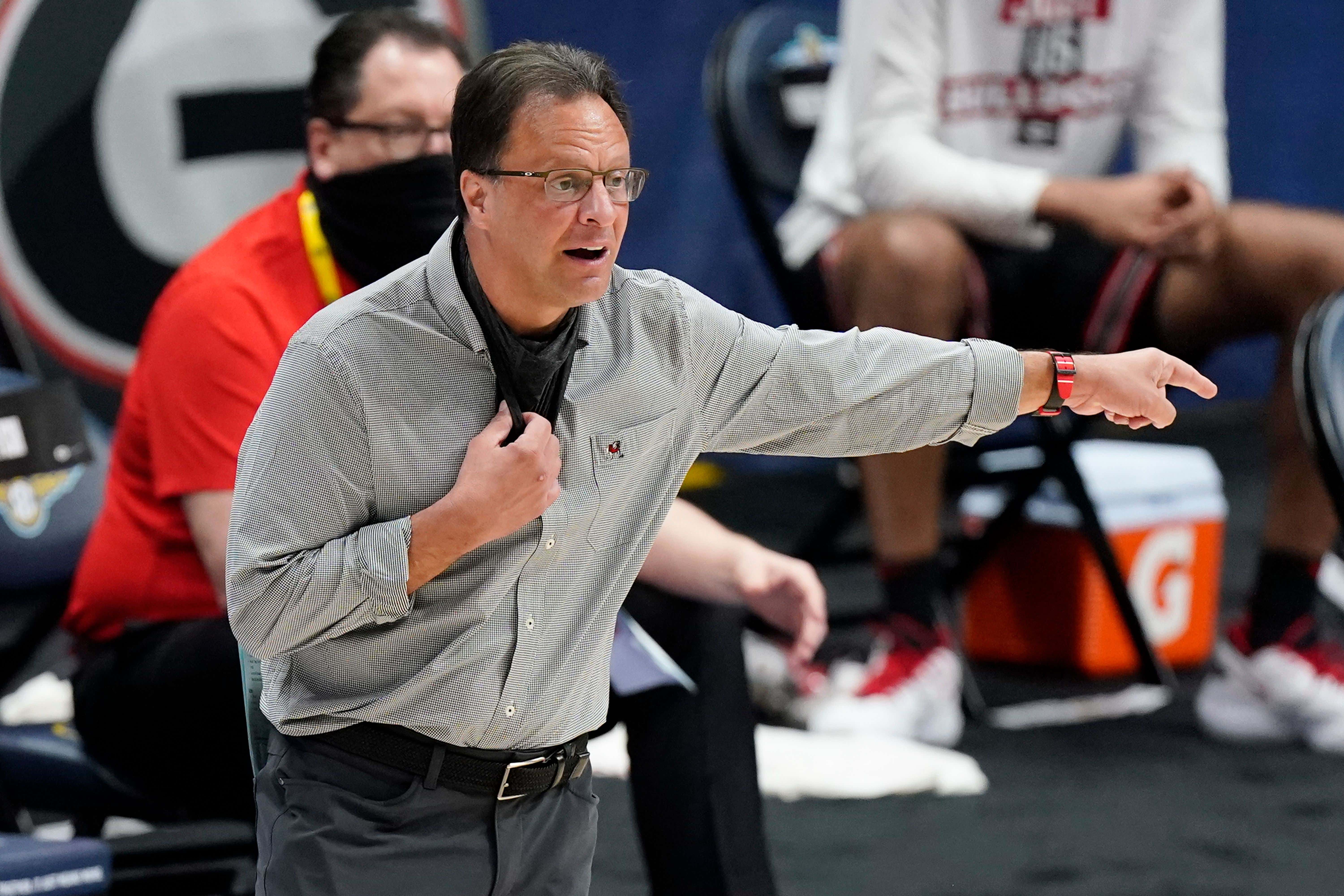 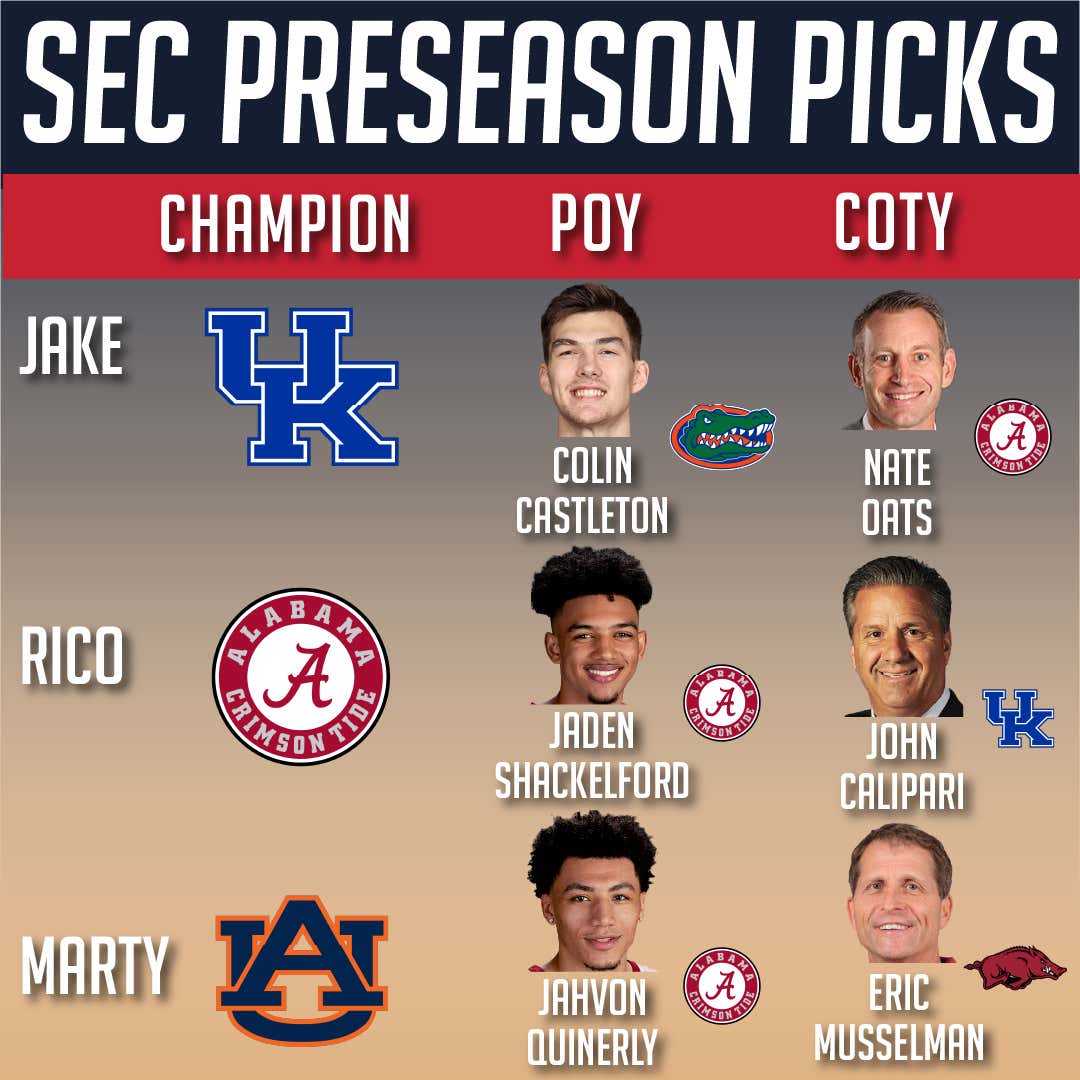 Do you agree with any of our picks? Who got left off the list? We also previewed the Big 10 on today's show, and next week, we will hit on the Pac-12 and the smaller conference teams + mid-majors. 12 days until tip-off!