The Big 12 was probably the deepest conference in college basketball last season. Not only did the league produce the National Champions, but there were seven teams in the conference that all comfortable made the NCAA Tournament. While the postseason production certainly wasn't there (aside from Baylor), there are so many opportunities for second weekend teams once again.

On today's episode of the Barstool Bench Mob, we previewed the Big 12 and Big East conferences, but in this blog, it's all about the Big 12. Enjoy this conference while it lasts, because both Texas and Oklahoma are off to the SEC in a few years. But this season should provide great drama in the Big 12, so let's dive into all 10 teams, with our conference picks to follow. The order we are previewing the teams is based on the conference's preseason poll:

While one of the biggest headlines from last college basketball were how the blue bloods were down, Kansas still comfortable made the NCAA Tournament as a No. 3 seed. Yes, the Jayhawks were bounced in the second round, so what did Bill Self do about it? Secure what is probably the biggest transfer portal splash this offseason: Arizona State's Remy Martin. He gives the Jayhawks a true point guard, something they lacked last season. We always had those debates about who “the guy” was for KU, and they answered that with this big get. They lose Marcus Garrett, but return pretty much everyone else of note, which puts them in a spot to be the favorites of the conference. Ochai Agbaji, Christian Braun, Jalen Wilson, and David McCormack will most likely round out the starters along with Martin. As for the bench Drake transfer Joseph Yesufu will make an impact and Mitch Lightfoot is still somehow on the team. He is approaching Perry Ellis range, in my opinion. There are no 5-stars coming into Lawrence this season, but the  4-stars include KJ Adams and Zach Clemence, and Bobby Pettiford. 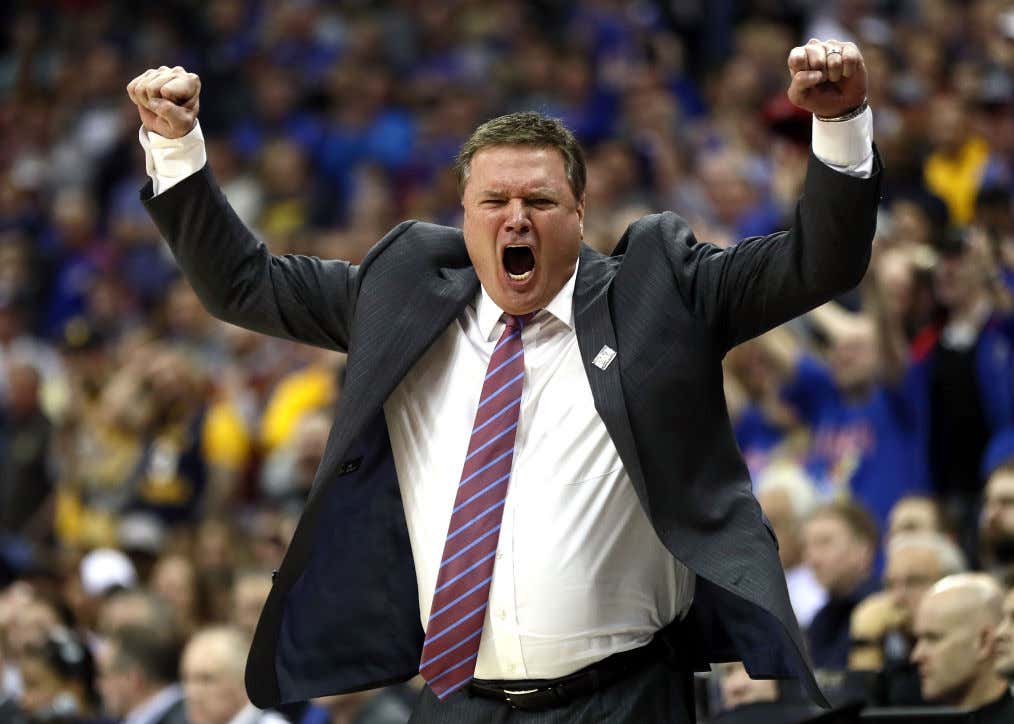 The most notable coaching change in the conference belongs to the Texas Longhorns. In a rare move, Chris Beard stayed in the league and in the state, but now calls Austin home. One of the biggest acquisitions in the country is coming to Texas in Minnesota transfer Marcus Carr. UMass' Tre Mitchell will also play a major factor on the team, while the bench is loaded with transfers, too. Devin Askew (Kentucky), Christian Bishop (Creighton), and Dylan Disu (Vanderbilt) are all ready to start new chapters with the Longhorns. There are a total of SEVEN incoming transfers for this Final Four contender and the team chemistry on the court is something to watch, as there are a lot of unfamiliar faces for the Longhorns. 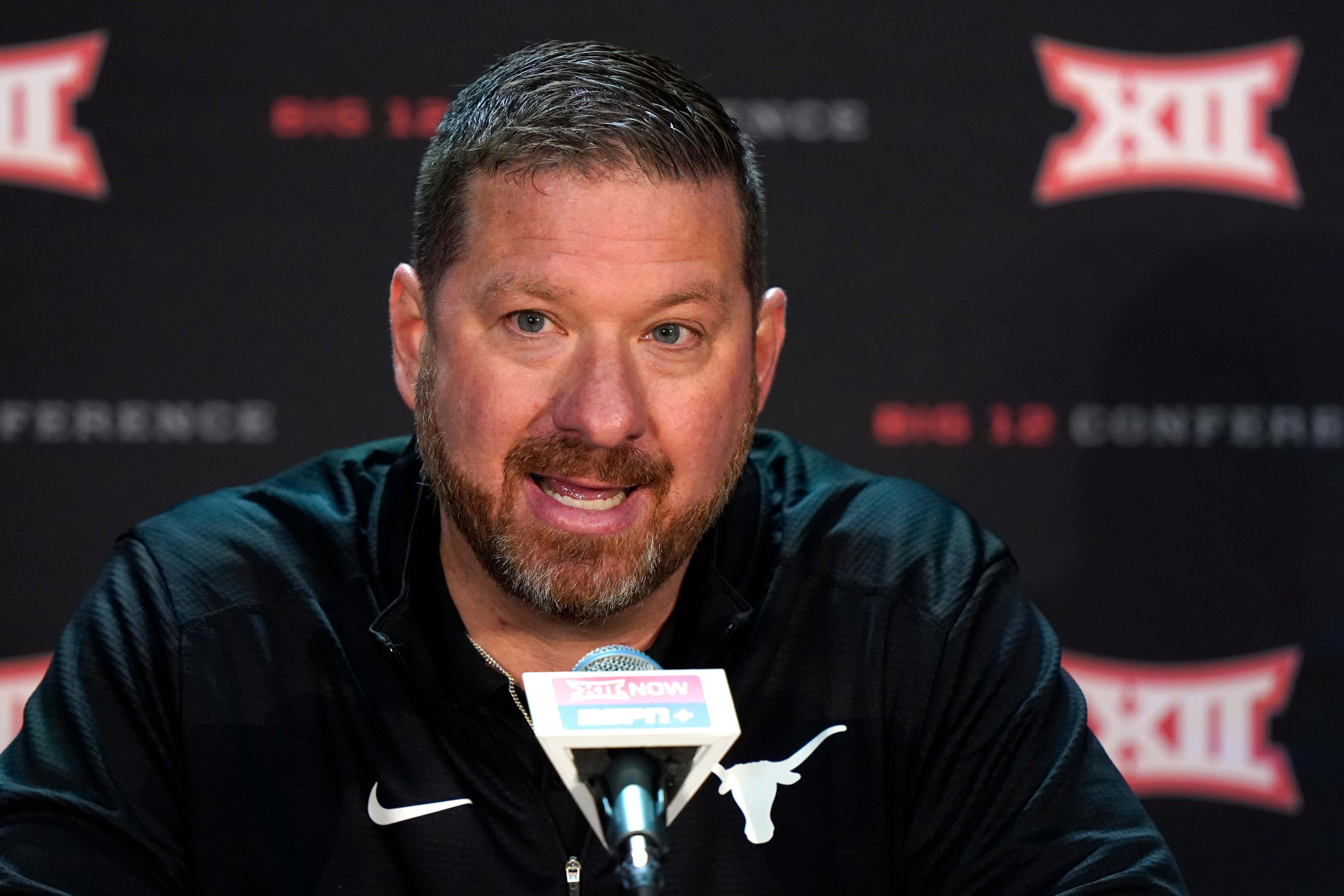 The defending National Champions have their work cut out for them this season. Four out of the five starters are not with Baylor anymore, but they do return a handful of role players from the squad that cut down the nets in 2021. Flo Thamba, mullet man Matthew Mayer, and Jonathan Tchamwa Tchatchoua are also back, in addition to Adam Flagler. The biggest new face to know on this team is Arizona transfer James Akinjo, who was first team al Pac-12 last year and second in the league in assists. LJ Cryer will be involved, too. The key con-conference games to circle are Villanova (Dec. 12), Oregon (Dec. 18), and Alabama (Jan. 29). 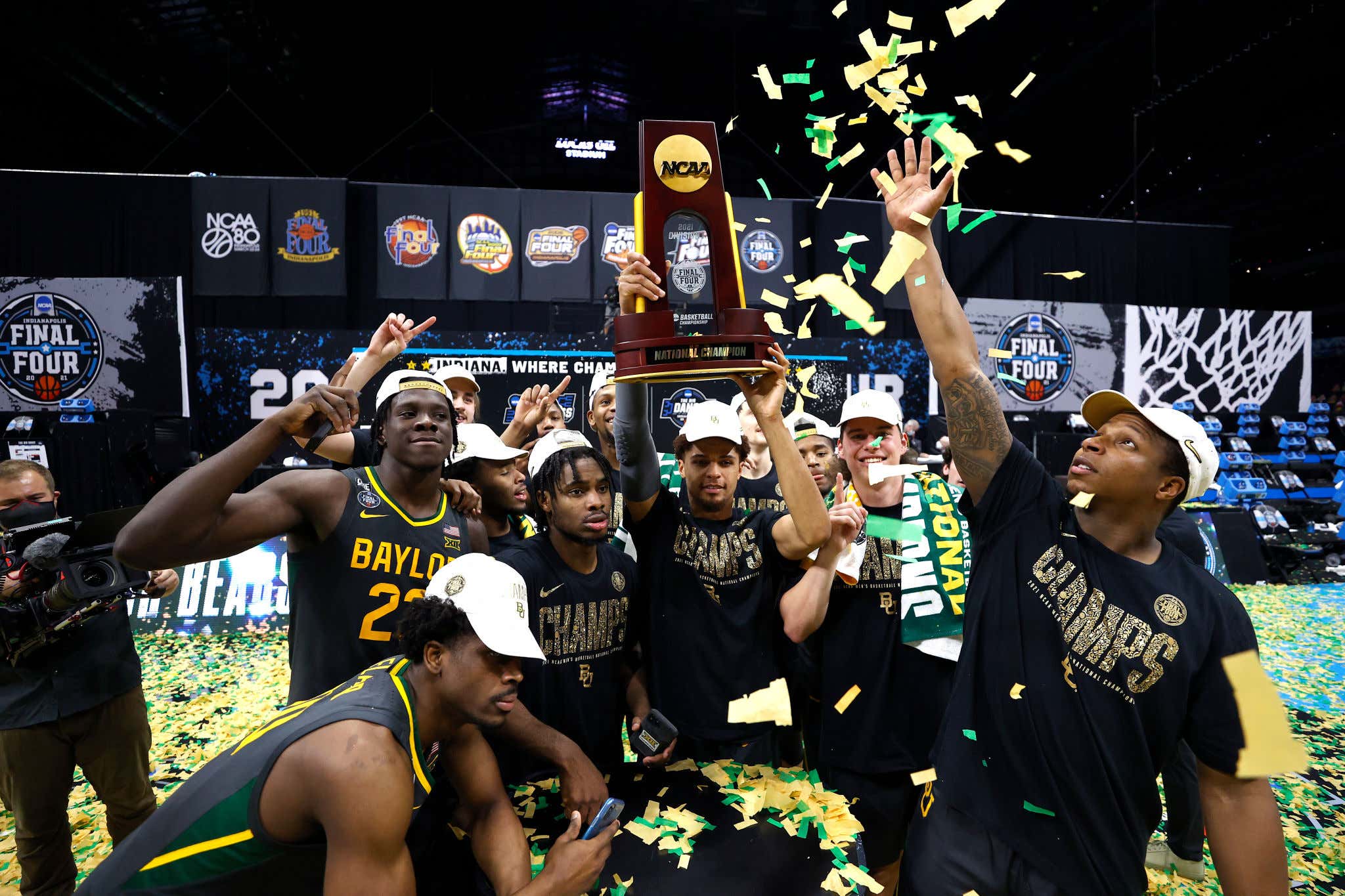 After being Chris Beard's right hand man, first time power conference head coach Mark Adams has the keys to the program. A few familiar faces return, most notable Terrence Shannon Jr., who has a chance to be one of the best players in the league. Other guys coming back at Kevin McCullar and veteran Marcus Santos-Silva. A major move in the transfer portal for Texas Tech was Oral Roberts' Kevin Obanor, who was one of the key pieces to last year's Cinderella team. UTEP's Bryson Williams joins the Red Raiders, too. Despite losing Mac McClung and Kyler Edwards (transferred to Houston), I think Texas Tech has enough weapons to return to the NCAA Tournament. 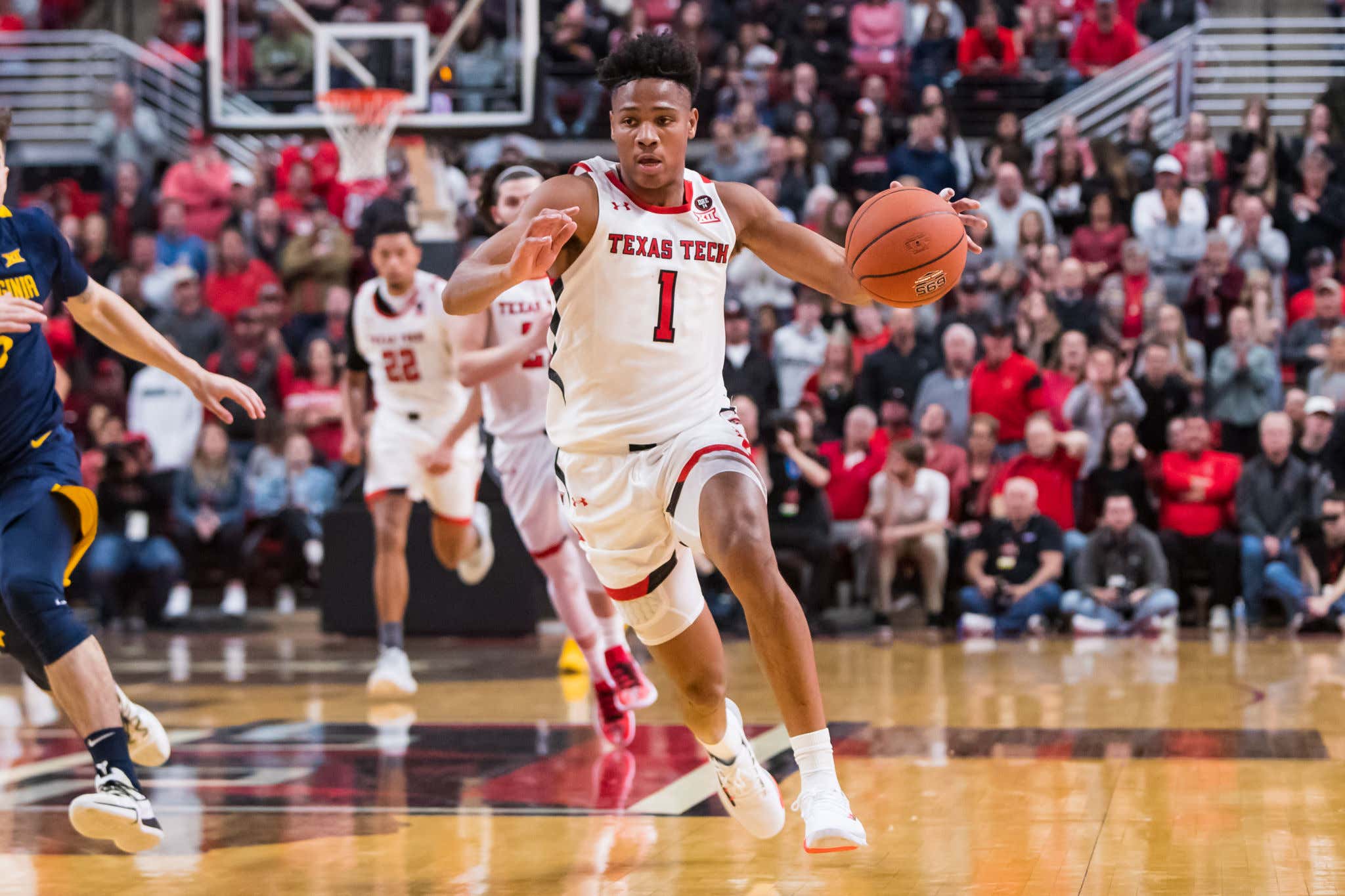 The post-Cade Cunningham era begins now. Oklahoma State appealed its postseason ban last season, and it worked (still TBD on this season). The Cowboys may have lost the No. 1 player in the country, but they return everyone else and add some transfers. Avery Anderson had 20 points in an upset over Baylor, Kalib Boone took a huge leap last year, and Isaac Likelele is a huge returning piece. Newcomers to watch include Bryce Thompson (Kansas) and Moussa Cisse (5-star recruit and Memphis transfer), in addition to Woody Newton from Syracuse. I think Mike Boynton is the most underrated coach in the Big 12, and he will prove that this season despite losing the best player in the country. 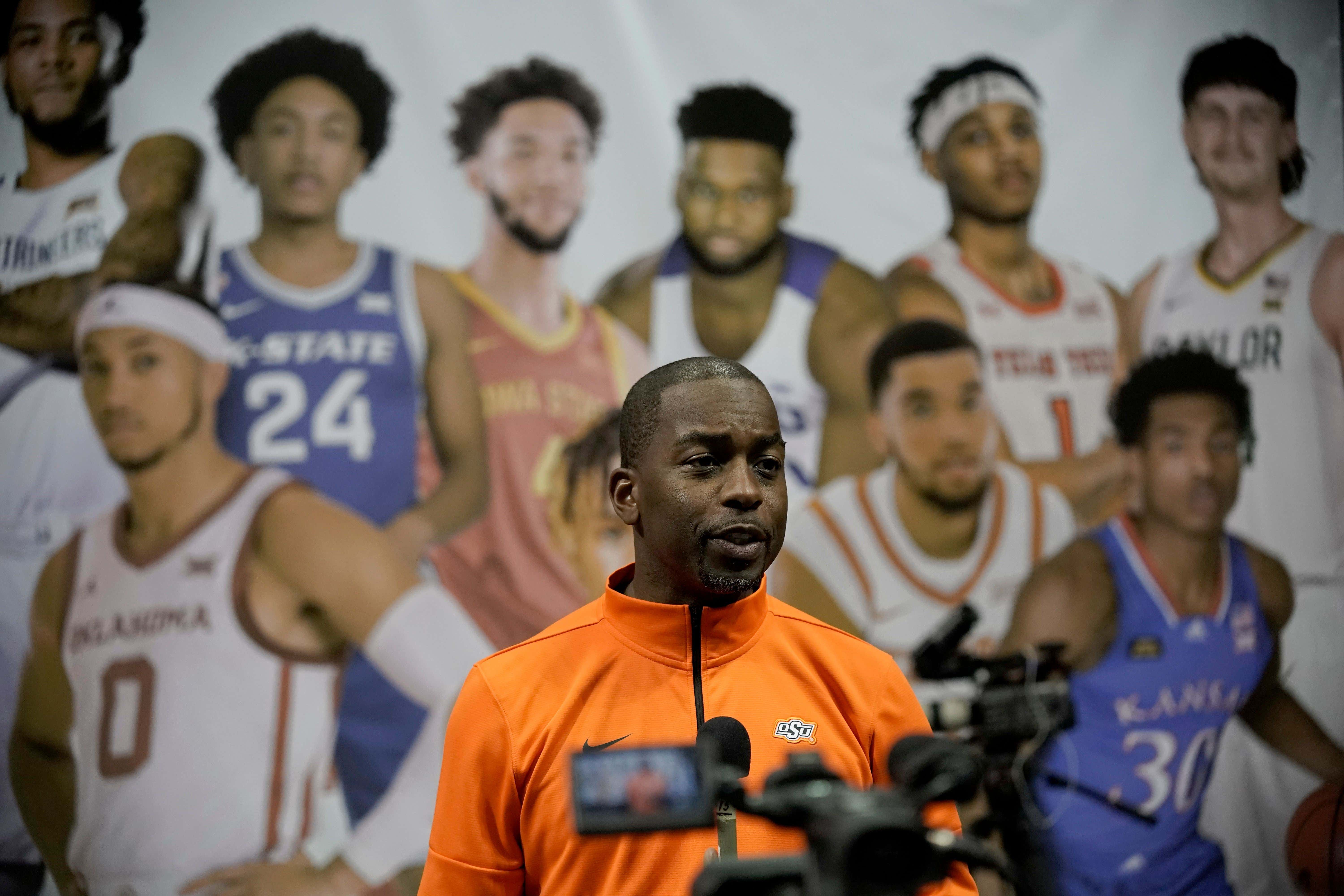 If the Mountaineers are going to have a successful season, it will most likely be because of Sean McNeil and Taz Sherman. Old Dominion transfer and super senior Malik Curry should play a big impact, in addition to freshman Kobe Johnson. Manhattan and DePaul transfer Pauly Paulicap stands out on paper, simply because of his name. But Bob Huggins doesn't have the most experienced team, however, I trust him to still turn this into a tournament team. 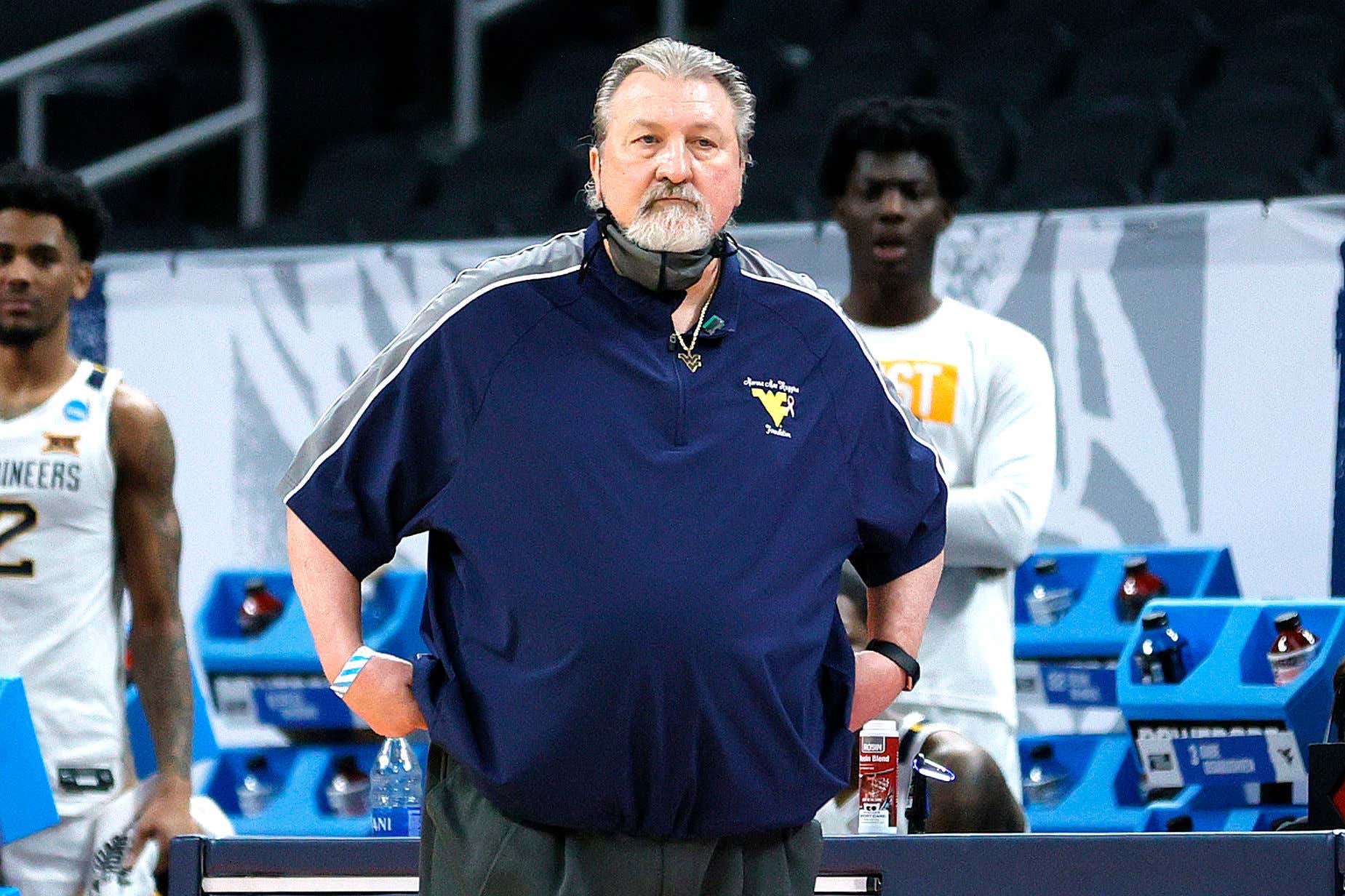 After putting Loyola-Chicago on the map by bringing the Ramblers to a Final Four and another Sweet 16, Porter Moser has graduated from the mid-major level and moved to Norman in the offseason. Coach Moser called Umoja Gibson (9.1 PPG last season) an "absolute workhorse," while Elijah Harkless will play a big factor, too. There are a few new, but familiar faces on the Sooners this season, including Duke's Jordan Goldwire, plus Tanner and Jacob Groves (Eastern Washington). It's a new coach, but not a complete rebuild for Oklahoma. 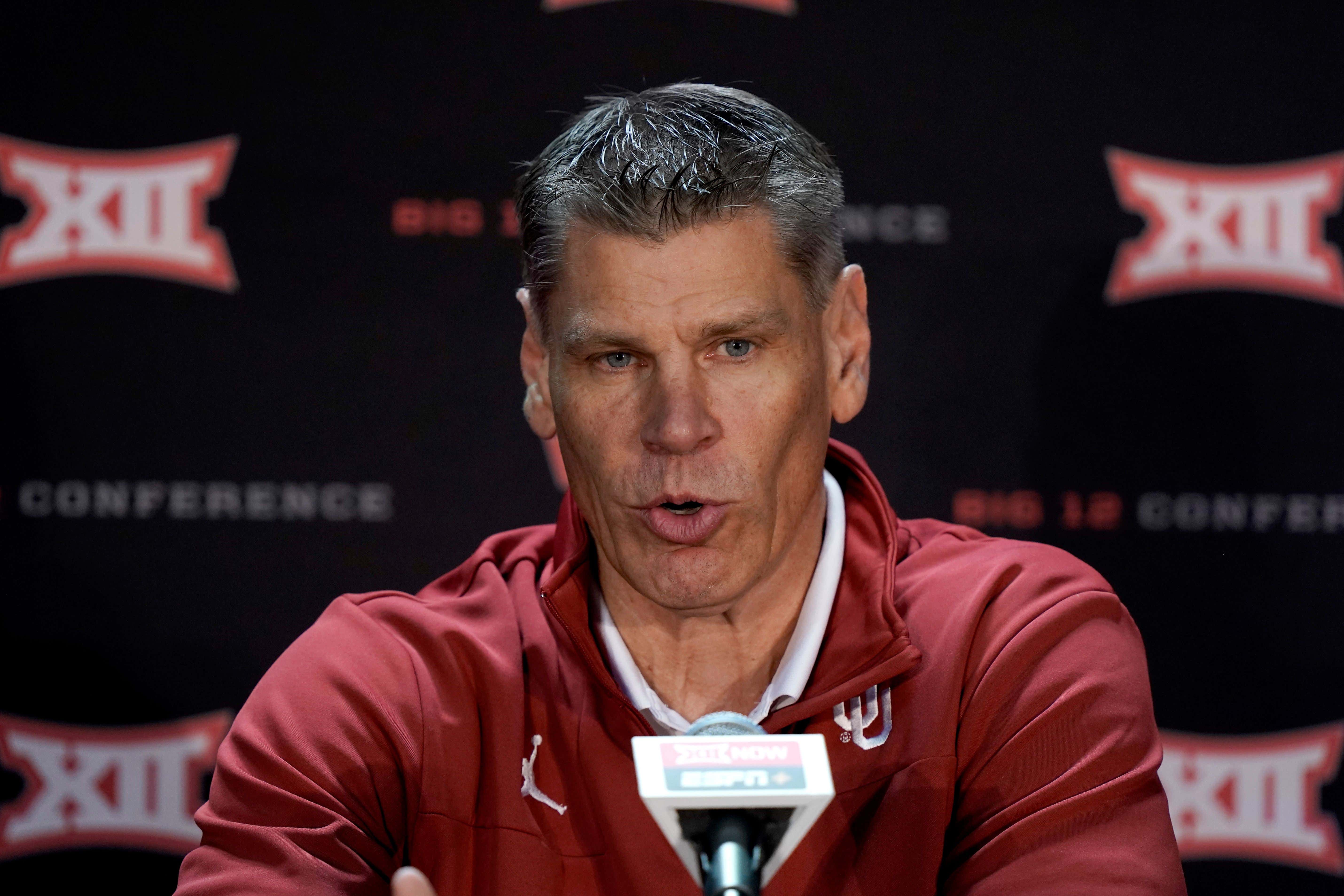 The pandemic hit every team hard last season, but TCU was towards the top of the list: every player on the team tested positive for COVID at some point last season. Luckily, the Horned Frogs have a veteran head coach in Jamie Dixon and if not for Cade Cunningham, Mike Miles might have been the best freshman in the Big 12 last season (13.6 PPG). TCU adds Texas Tech transfer Micah Peavy, who is another veteran face on this team who is capable of being a nuisance to some teams at the top of the conference. 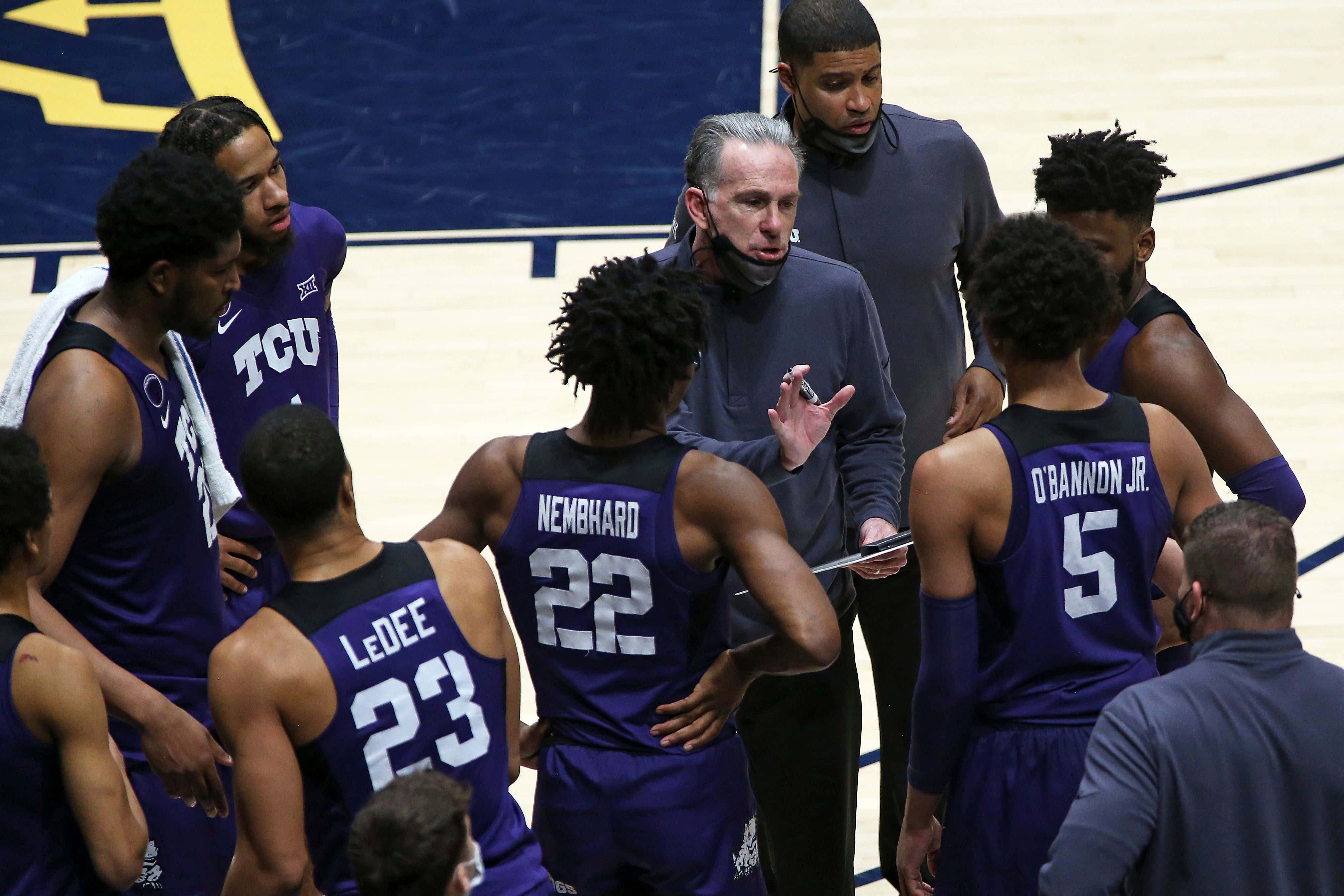 Entering last season, Kansas State has just four returnees. That immediately made it an uphill battle for the Wildcats entering a COVID season. However, they did win four of their last six games, and even pushed Baylor to the wire in the Big 12 Tournament. Now, Kansas State has eight returnees and added three transfers. Guard Nijel Pack was one of the few bright spots last season, and he is back, as is Mike McGuirl, who is the lone remaining player from the 2018 Elite Eight team. 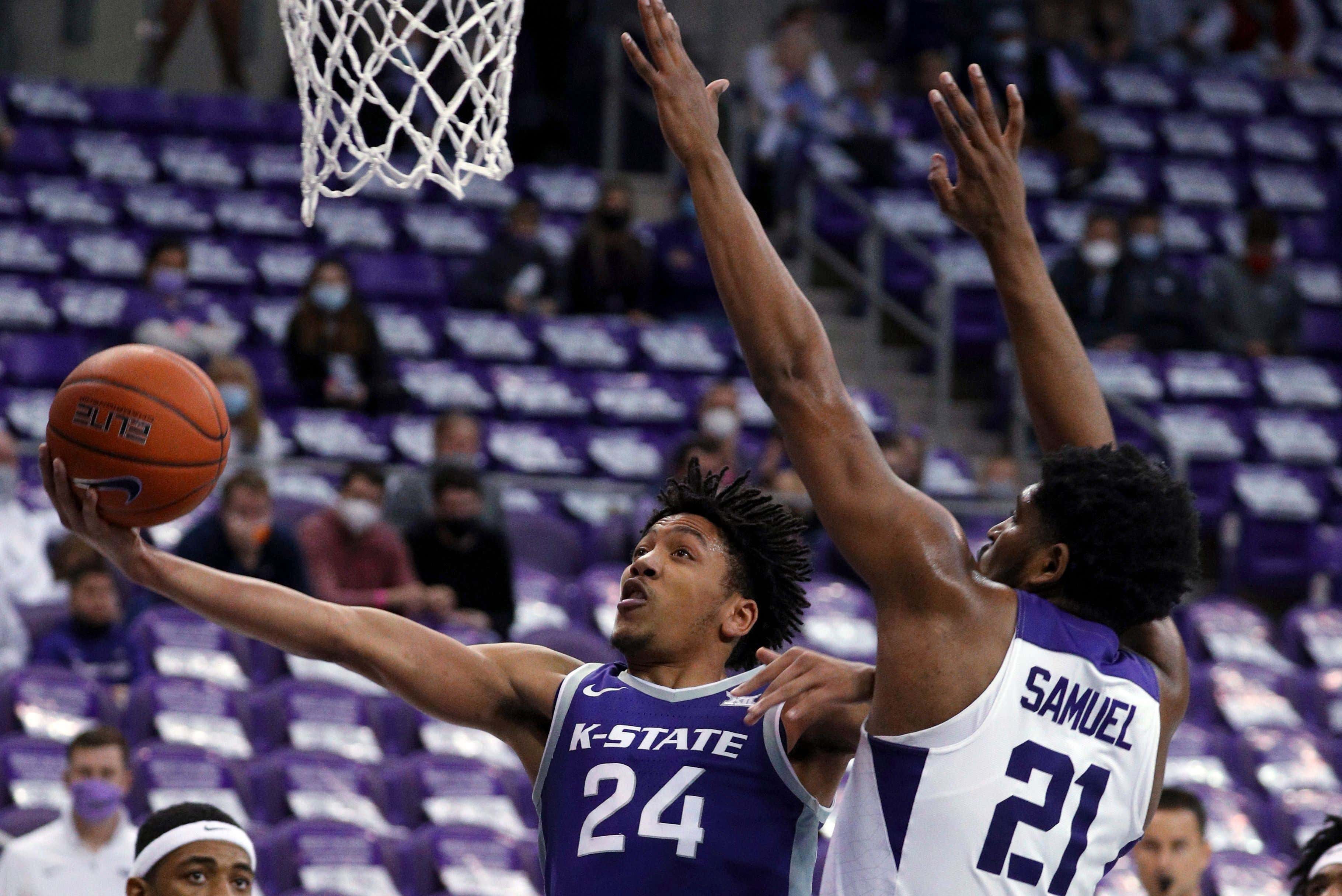 Things can only go up for Iowa State after going winless in conference play last season. There is a new head coach in TJ Otzelberger, who returns after two separate stints as an assistant in Ames (recently a HC at South Dakota State and UNLV). It's rebuild mode for the Cyclones, who have a team full of transfers but there is one huge positive in the recruiting category. Tyrese Hunter, the No. 39 player in the class of 2021, is the second-highest ranked recruit in program history. 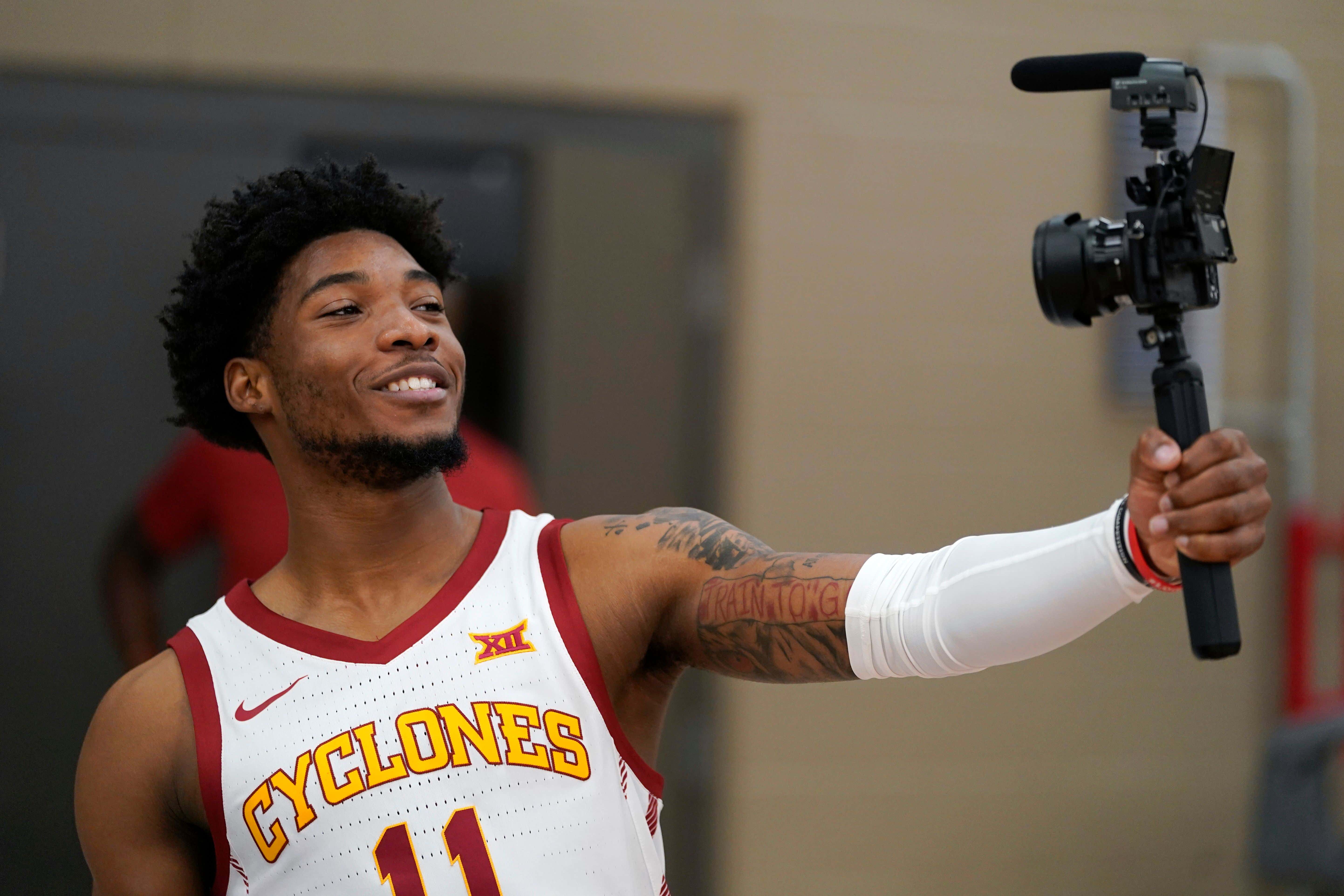 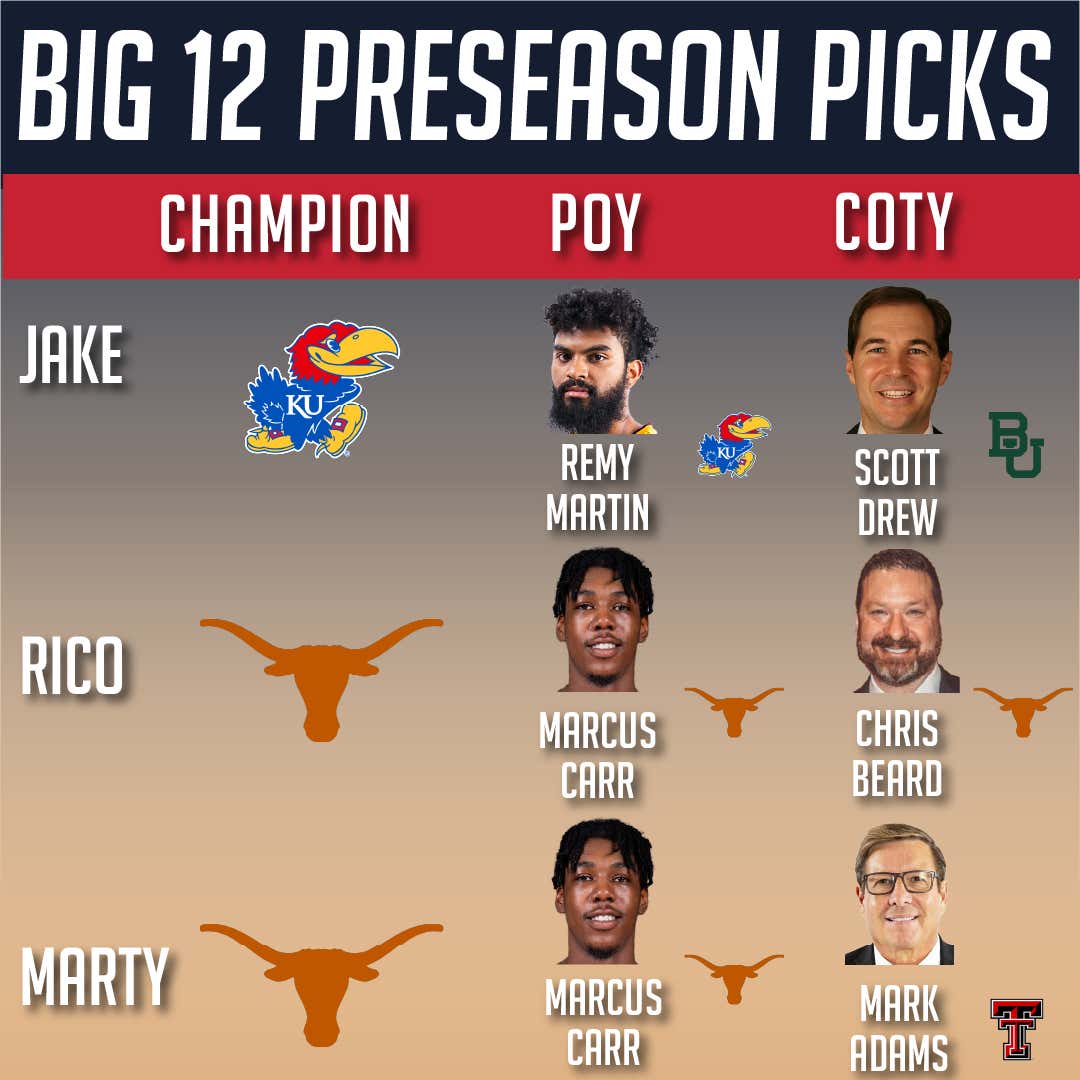 Do you agree with any of our picks? Who got left off the list? We also previewed the Big East on this week's show, and next week, we will hit on the SEC and the B1G. 19 days until tip-off!