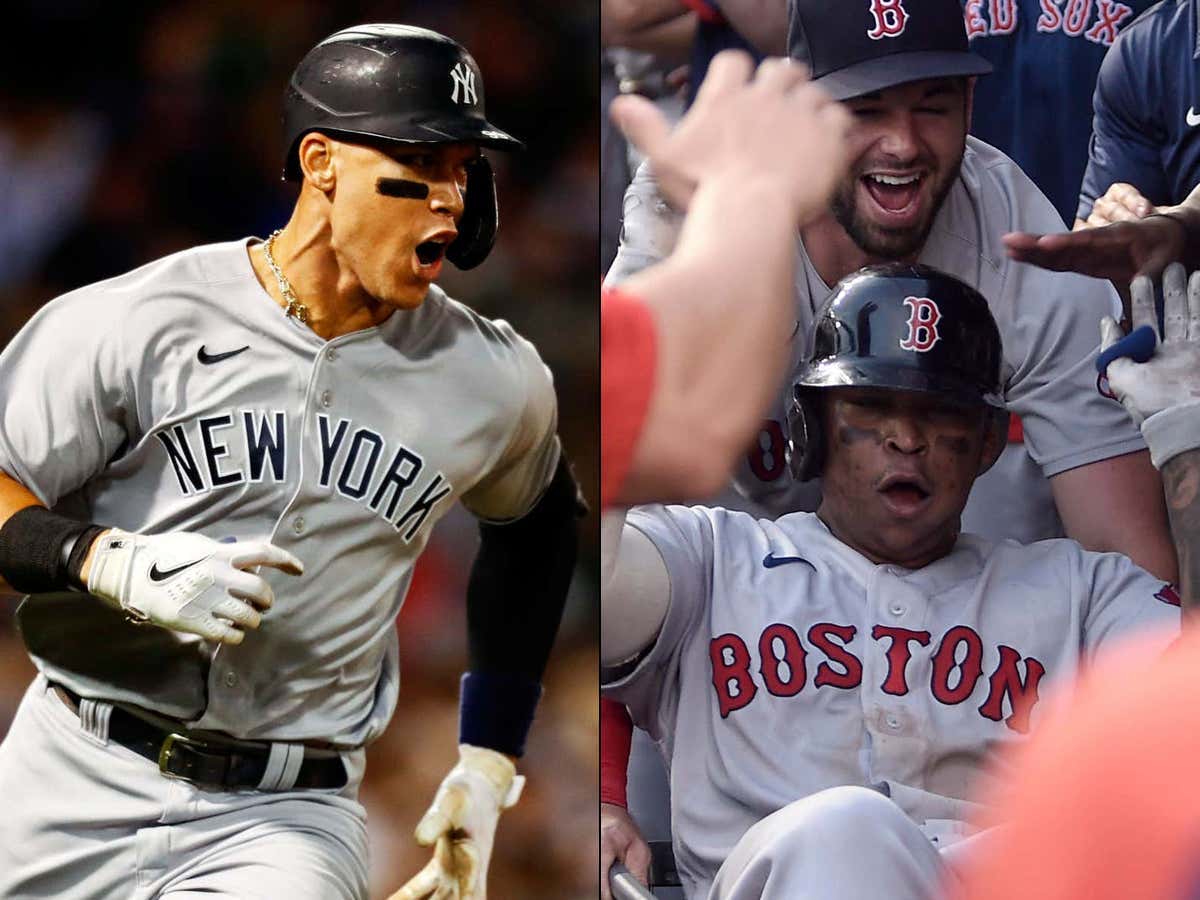 God do I hate the Wild Card Game. You watch 162 games all for your team's life to come down to one fucking game. Of course after all the back and forth chirping this season it comes down to one night between the Yankees and Red Sox to see who moves on.

For every fan with no skin in the game this is a wet dream. For anyone involved you wanna die until 8:00 hits. It feels like 8:00 is weeks from right now in my brain. Time is crawling. I'm having trouble breathing. My heart is racing. Let's talk about the game to distract my mind.

Both teams will be missing key pieces for this one. JD Martinez and Chris Sale were left off the roster for the Wild Card Game. Sale's absence was expected considering he started on Sunday, but I honestly thought there was a slim chance he'd end up on there to throw an inning or two because he's a maniac. Cora wouldn't let him. JD sprained his ankle on Sunday running out to the field in between innings and won't be able to go. That's a brutal loss for Boston.

There are no real surprises for the Yankees roster aside from the addition of Greg Allen who will be used off the bench for speed. Obviously they'll be missing DJ LeMahieu as he deals with a sports hernia which absolutely sucks.

The Sox took the season series 10 games to 9, but the Yankees won the final six including a sweep in Boston last weekend. None of that means a single thing tonight.

What matters is which version of Gerrit Cole shows up. Are you getting the guy from the postseason last year who stepped up when the lights got bright or are you getting the dude who struggled in his final 6 starts to the tune of a 6.15 ERA. For me the most important aspect tonight is how they handle Cole. In my mind the leash on him has to be short. We don't have time to let him figure it out for a few innings while the Sox tee off and add runs to the scoreboard. If he doesn't have it Boone must go to the pen early. You've got Luis Severino and Michael King ready to give you multiple innings to help bridge the game to the high leverage guys. In a perfect world Cole gives you 7 strong, Loaisiga comes in for the 8th, and Chapman closes it out. In reality I'm begging Cole to give me 4-5 good innings. 4-5 innings 2 runs or less and I'm feeling good. You've got King, Sevy, Wandy, Holmes, Green, Loaisiga, and Chapman rested and good to go. Use them.

Another interesting part of this is with DJ out, how do you set your infield defense? Rougned Odor has been manning 3rd in DJ's absence, but I don't feel too great about him. He's flat out not a good third baseman defensively by any means. Would it behoove Boone and co. to shift Gio back over to 3rd base and insert Andrew Velazquez to the lineup to play short? I know it's putting a ton of pressure on the kid but he's smooth at short and came through big time at the plate the last time Boston came to New York. The story of Velazquez coming through big tonight feels like it's meant to be. You also could go Tyler Wade there with Greg Allen and Velazquez able to pinch run with elite speed off the bench. My gut says they stick with Odor's experience, but man does he make me nervous over there.

Bottom line, I'm shitting bricks thinking about first pitch. The Yankees have to score first. They need to start fast just like they did two Fridays ago when it was Cole vs. Eovaldi and they jumped on the Sox right hander. You gotta give Cole some runs to breathe with and let him cook. Have to.

We'll be streaming tonight with Dave, Jared, Mush, Tommy, myself, Feits, Frankie, Coley, Hank, and Big Ev all in the Hoboken house sweating out every pitch. 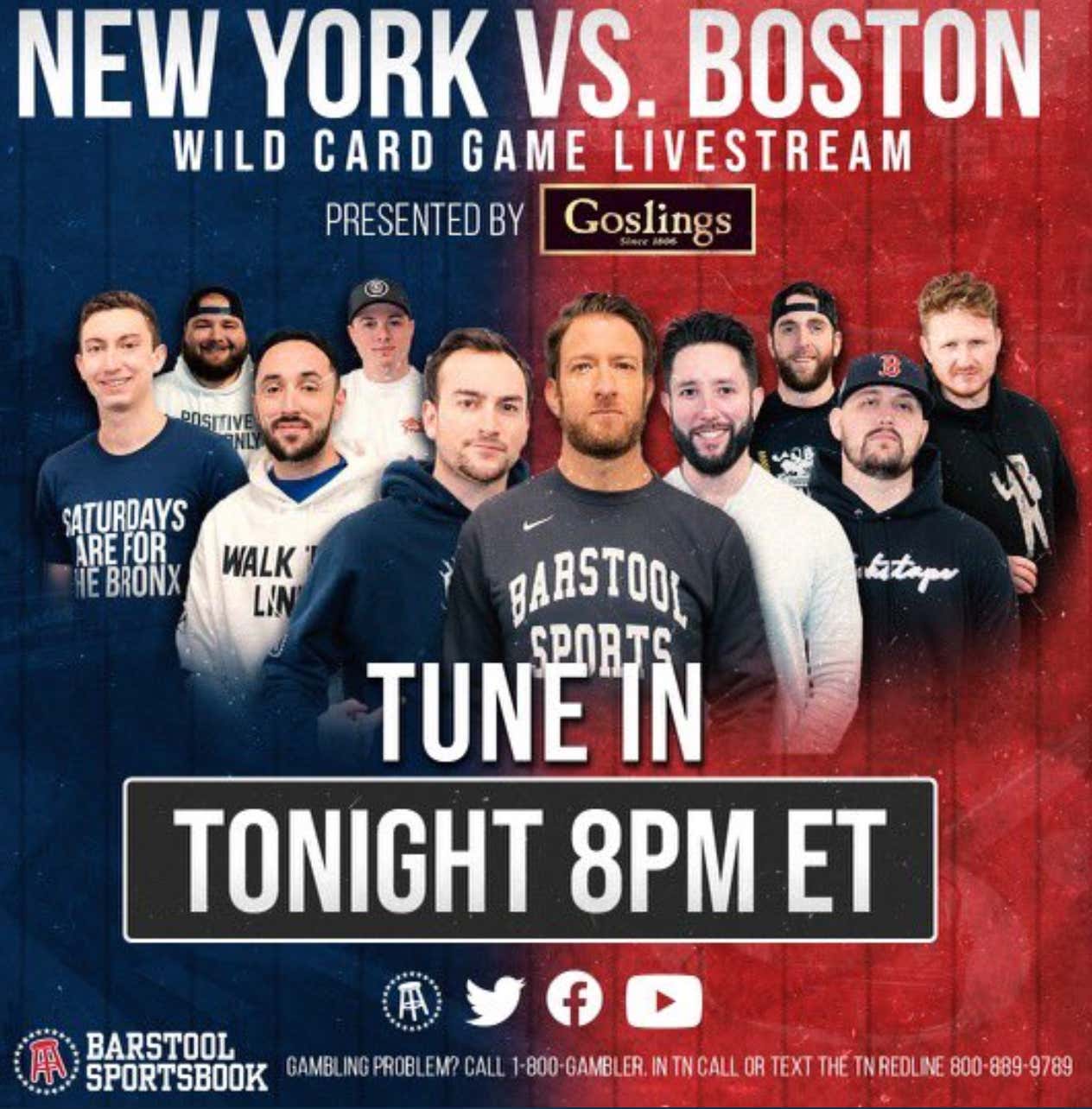 And we've got these boosts tonight for you guys to jump on as well. 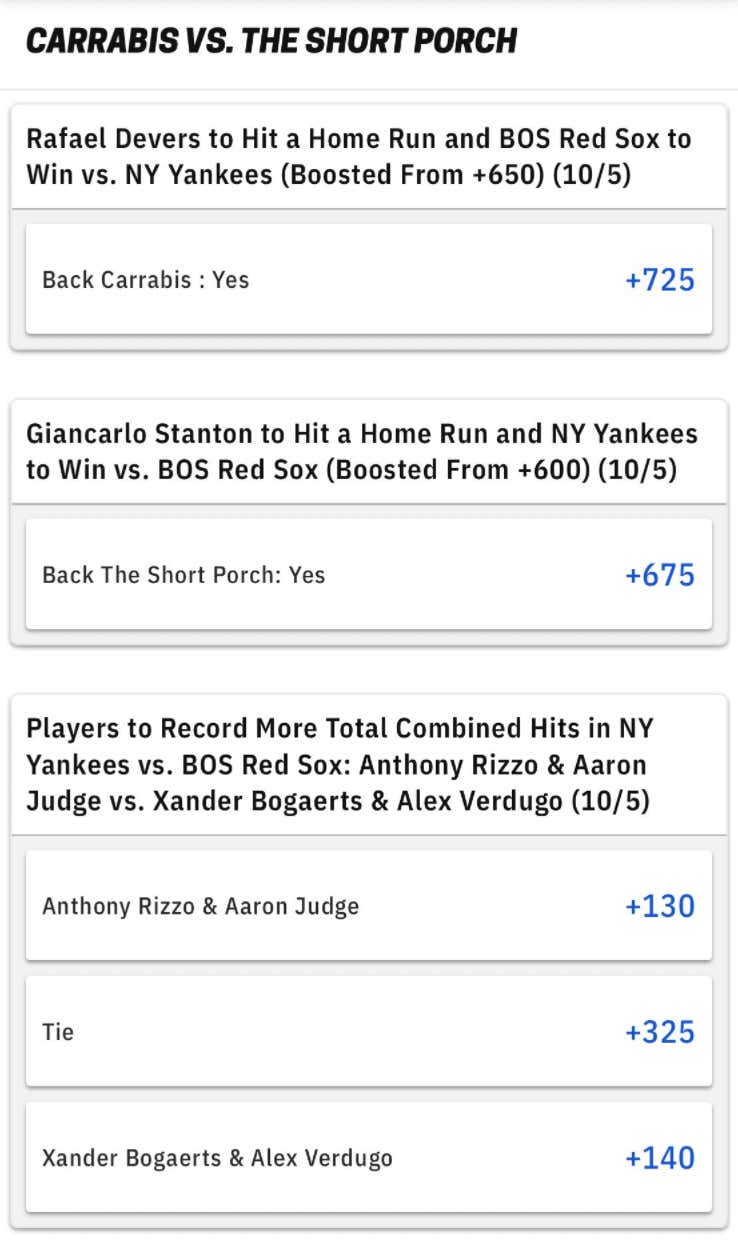 Listen to the pod as prep for first pitch