If you've been on Netflix or Twitter in the last two weeks, then you've seen or heard of Netflix's runaway hit "Untold: Crimes And Penalties". The hockey-centric episode of the streamer's new docu-series recounts the incredible story of the Danbury Trashers, a minor league team founded by a trash magnate who then put his 17-year-old kid in charge. It's an incredibly entertaining doc about a notorious franchise that played just a pair of colorful and controversial seasons.

It's also been tearing up #HockeyTwitter and now people wanted to get their hands on some swag. So much so that Drake hit up A.J. Gallante, the son/GM/team pres, for a jersey. A.J. must be a huge Drake fan because he literally took a jersey off the wall and out of its frame to send to him ASAP. 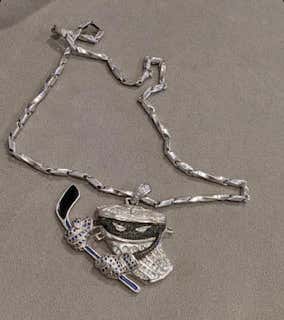 Right when the doc dropped, Grinnelli was on the Chiclets horn about getting A.J. on the show. He was happy to oblige and even busted out the incredible jewelry above just for us. We were also able to get former Trasher Brad Wingfield as well to make it a special Danbury Trashers episode.

If you haven't seen the doc yet…

I couldn't imagine being put in charge of a pro hockey team when I was a senior in high school let alone succeeding. But A.J. was and he has a hell of story worth checking out.