Back in December of 2011, I was a broke kid right out of college trying to figure out what to do with my life. I had just moved to NYC with no money and no direction. I got a job working in the cubes for an advertising agency and I hated it and I hated my life. The only thing I liked doing was playing poker. But unfortunately, playing poker is an expensive hobby, and even more expensive when you're making $35,000 a year. But it's what I wanted to do, so I took a Greyhound Bus to Atlantic City to play the $345 WSOP Circuit Event. It was a small buy-in, and I believe they slapped a pretty big guarantee on it to make it juicy.

I played day 1 and found a bag at the end of the day, putting I'd guess 20bbs into the bag to come back to for day 2. It was my first ever live tournament day 2 and I was thrilled.

I came into the day somewhat short, and on the first orbit of the day I was in the big blind with the QTcc (Queen of club, Ten of clubs). It folded around to the small blind who raised, and I looked down at my cards and announced all in. He tanked for a minute, and then folded, showing an ace. That one hand, that ONE HAND, gave me all the confidence in the world and I took OFF. From then on, I started dominating. As the day went on, my chip stack grew and grew. I recall I eliminated a short stack right on the bubble, and by the time there were only 6 tables left (36 players) I had something like 25% of the chips in play. I mean I had PILES. I don't have many pictures from it because this was a full decade ago (holy shit this was in 2011, god damn) but look at this fella! Glasses, weird winter hat, longest fingers this side of the Mississippi. 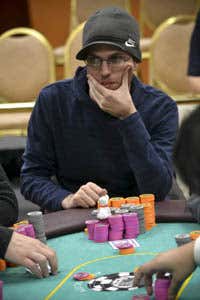 And I'm not sure when this one was taken but I had so many chips! 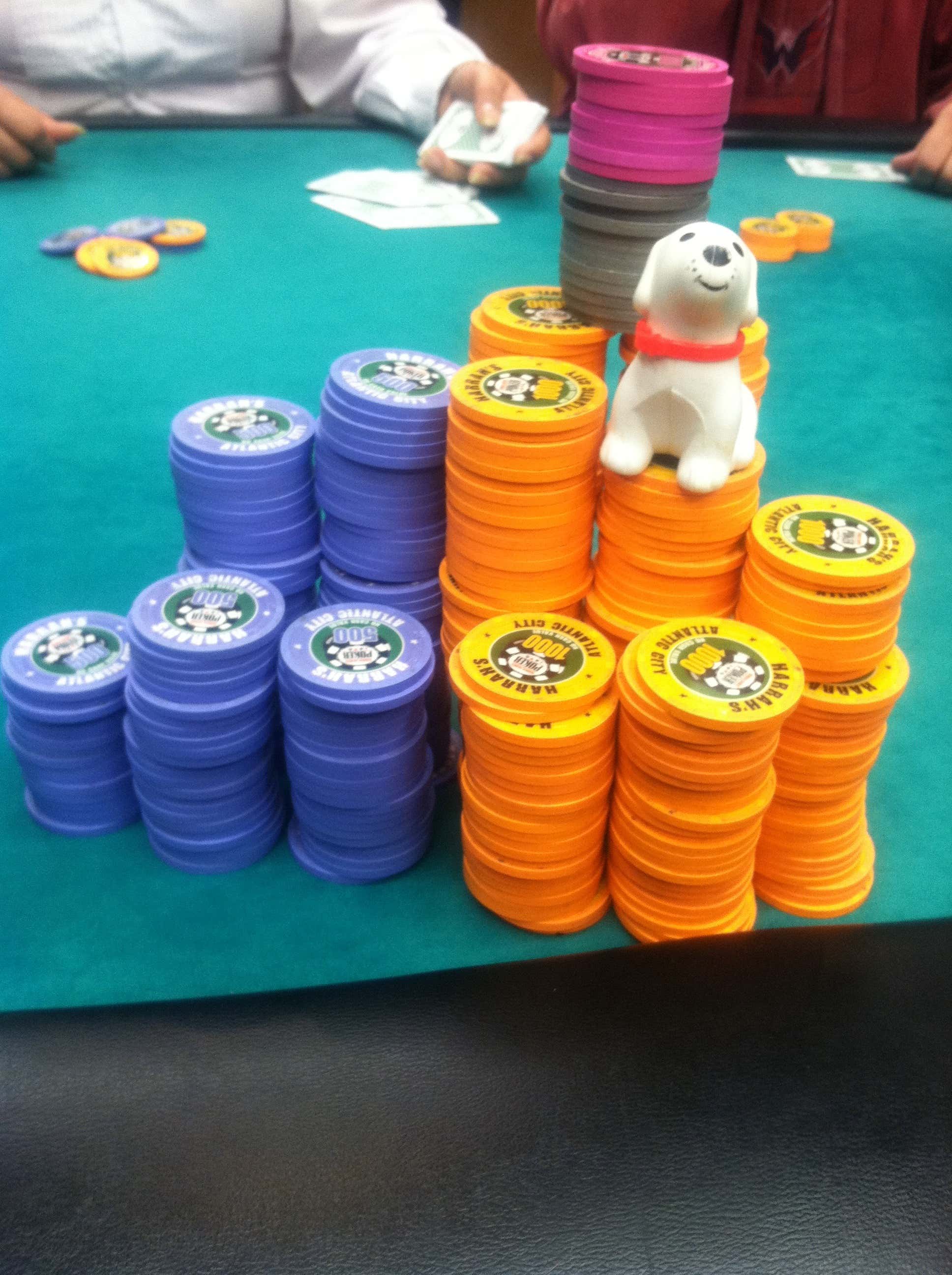 Shout out that dog, the real MVP.

I went into the final table 1/9 with piles and piles of chips. But then, as the story goes, I fucked up and played bad. Probably one of the bigger mistakes of my life. I had SO MANY CHIPS but I had zero experience and completely imploded, ultimately finishing in 7th place for $7,694. I remember being so excited, I had never held that amount of cash before. 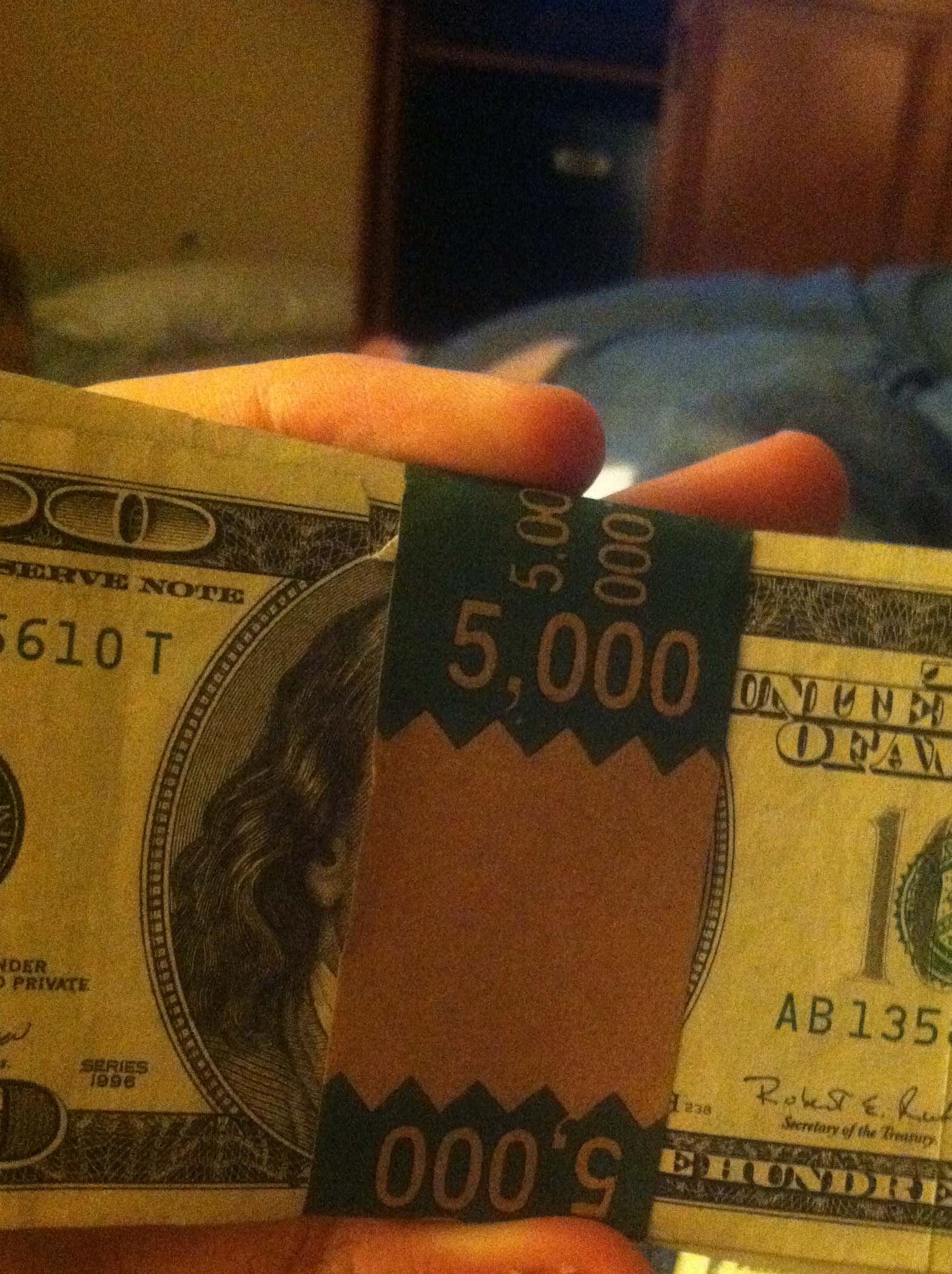 Not a bad payday for a 23 year old, even if I fucked up and it was $50k for first, I was still very happy. And all because of that QTcc hand. If not for that shove in that spot, none of it would have happened. That score allowed me to have breathing room to live life on my terrible salary in my dumpy NYC apartment, and that's why QTcc will forever be my "lucky hand".

On today's podcast, Mintz and Smitty also told their lucky hand stories, Smitty talked about playing poker while juggling being a new father, we talked about using HUDs online and how to focus at the live table (headphones? Music? Table talk?), and lots more. It was a fun episode for sure, and you don't have to even care about poker to enjoy!

And of course we have merch in the store. I recommend the light-weight hoodie, it's great.