CLICK HERE TO LISTEN/SUBSCRIBE ON YOUR FAVORITE PODCASTING SITE

It's been a rough week in Metsland with the Amazins getting their guts ripped out by the two best teams in the National League and Portnoy leading the #FrankWasRight brigade at the throats of KFC as well as myself.

I have no problem with Frank being upset about the Mets offense playing like shit because to be honest it's driven every Mets fan with a brain, a pair of eyes, and a first grader's knowledge of math nuts for the entire year. I don't even have a problem with Frank complaining every single time something bad goes wrong with the Mets then being quieter than a church mouse when they win since he keeps #MetsTwitter perfectly balanced, as all things should be. I have to mute Frank on Twitter during baseball season since watching the Mets makes me feel bad enough about the team but I understand he has a role in checking the hopeless optimists who think the Mets will win every single game, which is most certainly not me even though I'm painted as the forever optimist in this sick and twisted Barstool Mets fan world.

What I do have a problem with is him demanding apologies and stirring up the hornets nest to where I have a bunch of randos tweeting me #FrankWasRight since 90% of the people who do this are Yankees fans with #NYY in their profiles and/or Mets trolls just trying to rile people up. Mets fans have come too far after the universe cosmically shifted by dumping our broke boi owners and giving us a billionaire known as much for his massive brain as his wallet to have someone in our own camp unleash hordes of gabagool Yankees fans into my mentions like a #MetsTwitter Trojan Horse. 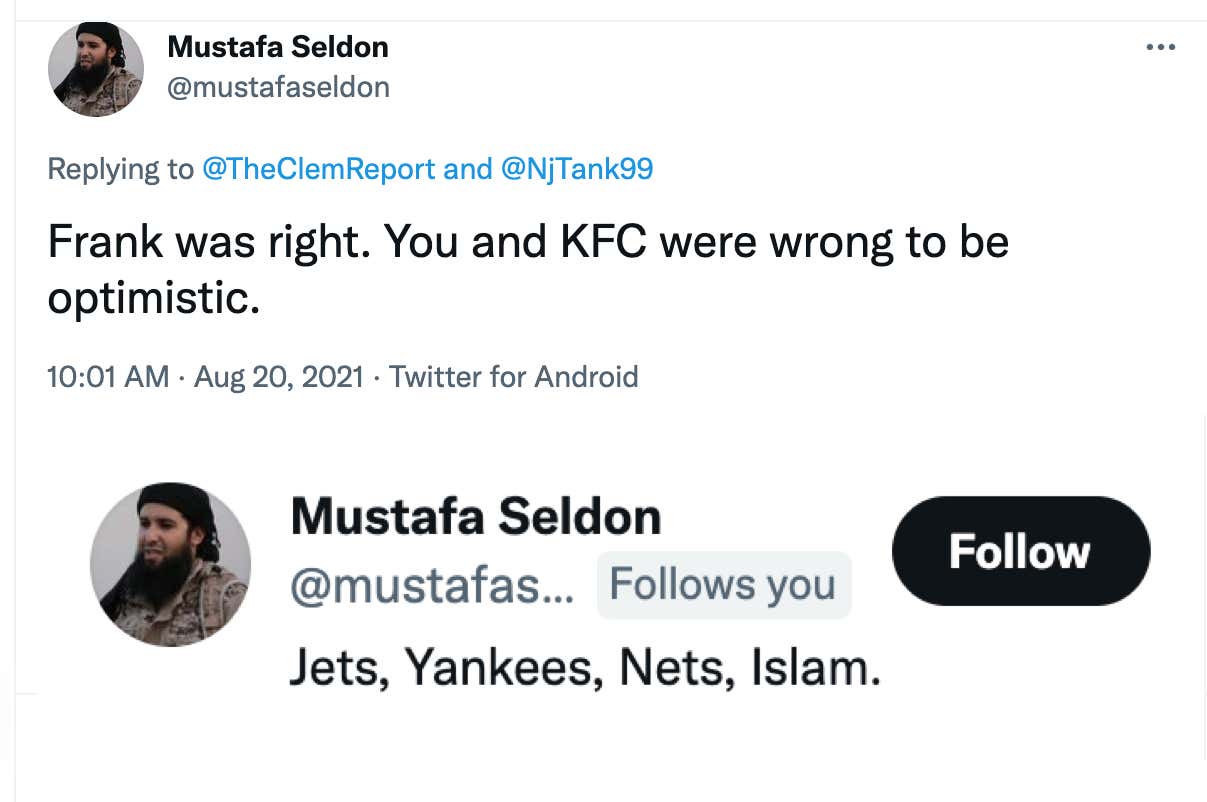 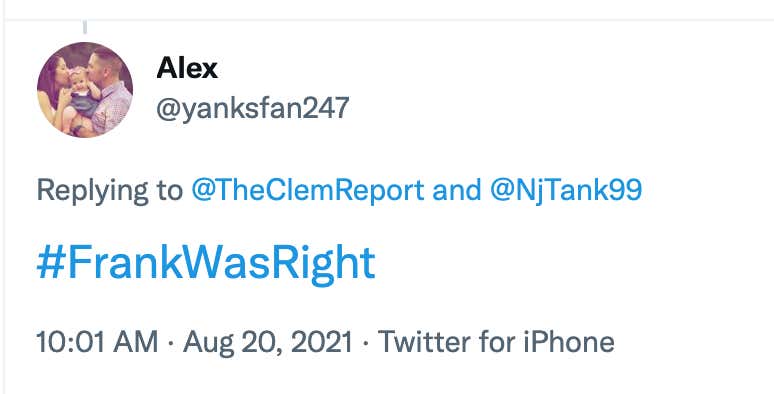 It's not even like Frank said the Mets were going to be in first place for the entire season and then fade as guys who were supposed to be good hitters either got hurt, had the worst season of their careers, or both. He said…well I'm not sure what he said but none of these are #right. 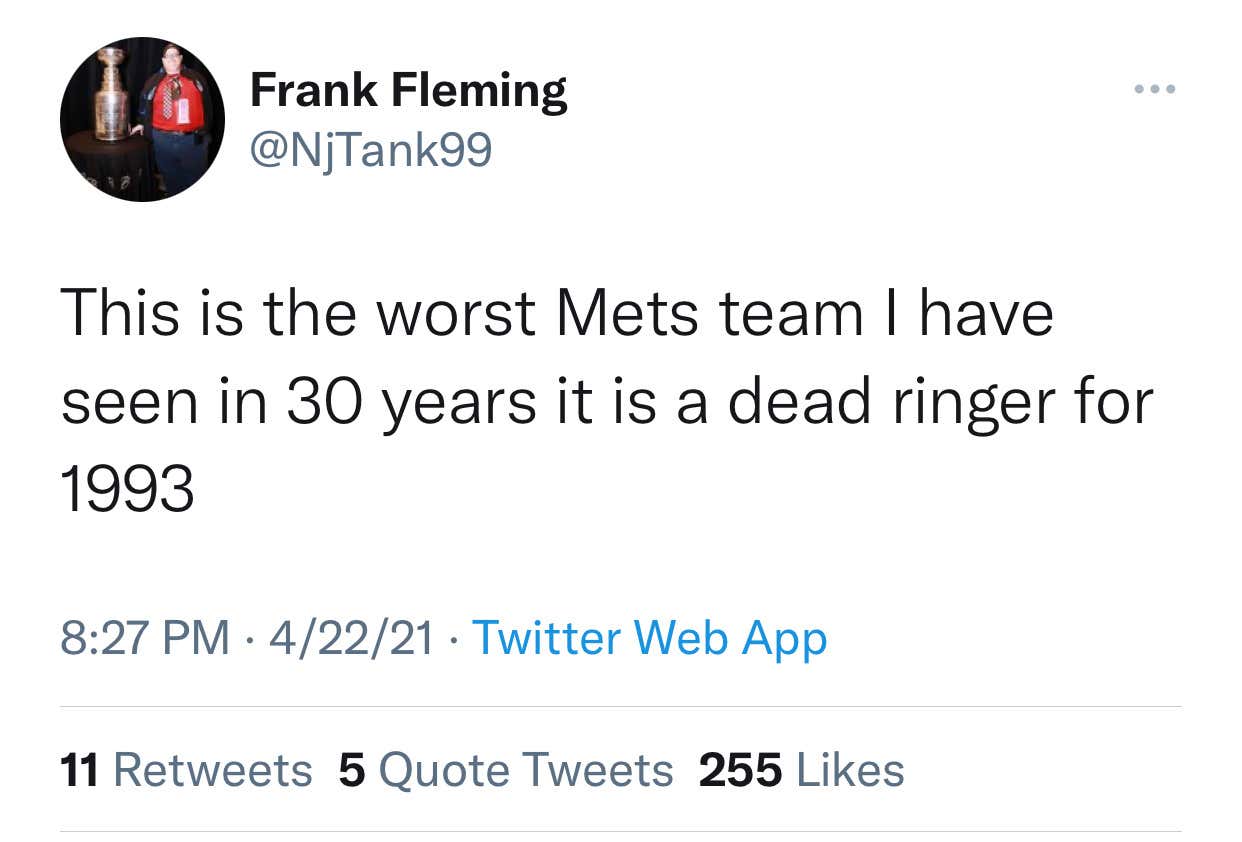 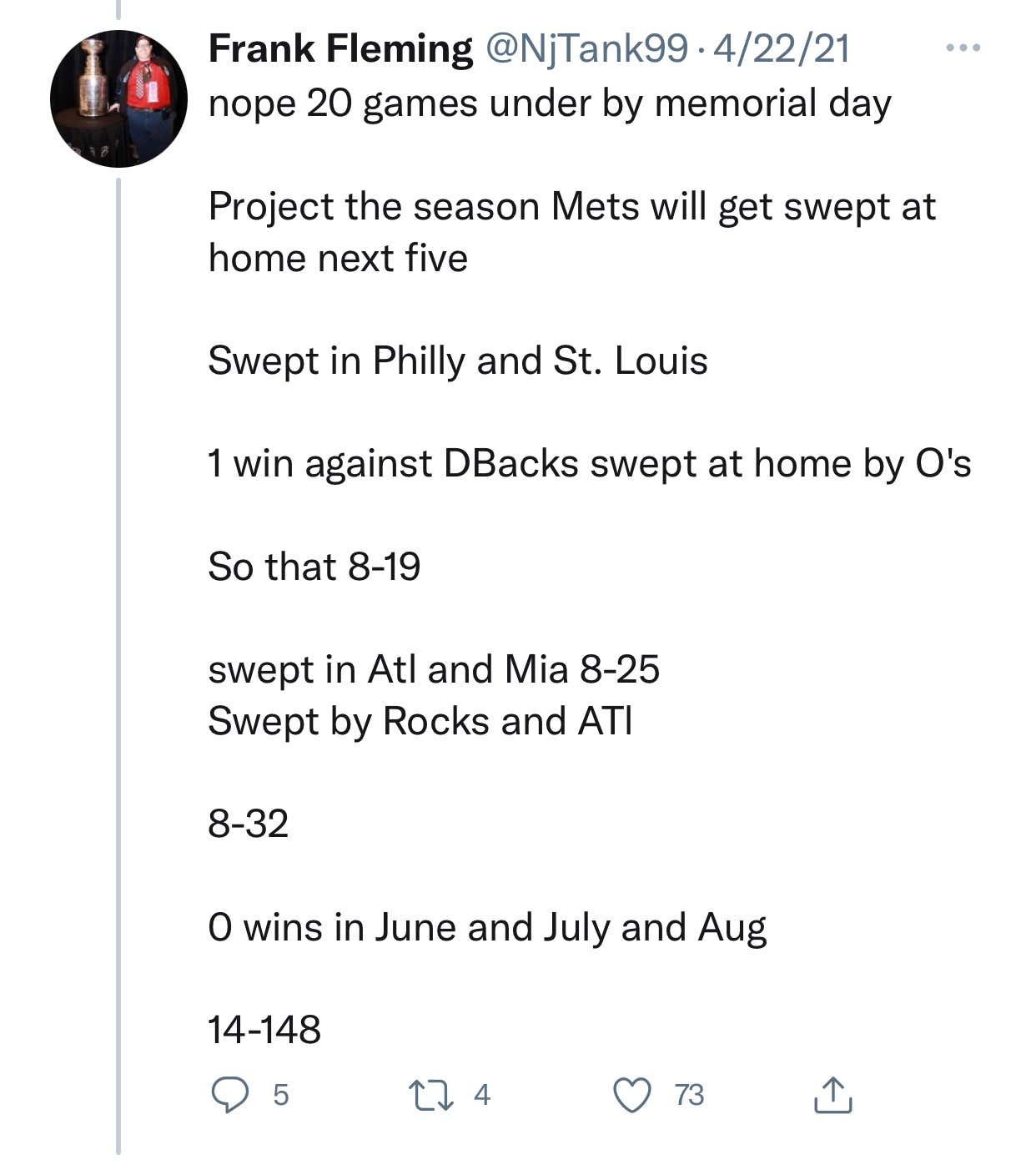 Any baseball fan can predict doom and gloom in a sport where the best teams lose more than 1/3 of their games and hitters being successful at the plate 1/3 of the time makes you a Hall of Famer. Conversely, you aren't a true baseball fan unless you complain about a random play out of the literal millions that occur during your team's endless season because that's what this stupid game does to the human brain. Maybe that's why Frank was starting to believe in May.

Or how he was #wrong about Francisco Lindor's value to the team, even without acknowledging he was getting hot in July after a nightmarish start in April and May.

In the end, the Mets may not be a playoff team or the worst team in franchise history. They are just a flawed team with good pitching, bad offense, and a chance to sneak into the playoffs like a ton of other teams in MLB history.

So the only comment I can go on Frank saying he is #right about is that the Steve Cohen Era is the same as the Wilpon Reign Of Terror because they hired a creep as GM, had some nightmarish injury luck that completely exonerated Ray Ramirez from any wrongdoing, and didn't sign Kumar Rocker, which is hardly the first MLB draft pick to not be signed. We can ignore Cohen signing a player to a contract twice the amount of anything the Wilpons ever spent, the gigantic contracts offered to Trevor Bauer and George Springer that were turned down, and not only listening to the fans' suggestions but also being a voice of accountability that the Mets never had as Jeff Wilpon let the franchise (and sometimes literally the stadium) burn around him.

I know we usually settle beefs at Barstool by stepping in the Rough N Rowdy ring but I would never challenge Frank to RnR because I like him wayyyy too much to fight him, every ring girl would be unable to focus on their jobs while us two hunks of beef were under the same roof, and the man has legit fists of fury.

So this is what I propose. If Frank TRULY feels like Steve Cohen is just another Wilpon with a different last name and a whole lot more money, he will accept my challenge of a Mets Fandom Retirement Match, which always gets the people going. If the Mets are just as bad in Steve Cohen's first five years as they were in the Wipons' last five years, I will bend the knee, say #FrankWasRight, and stop rooting for the Mets for the rest of my life. To be honest, I was thinking about retiring from baseball fandom after the Cohen sale fell through and it appeared the Wilpons would never give up the Mets and was going to raise my children as lacrosse players so they had the diehard hatred of baseball in their souls like every laxhead does.

However if Steve Cohen's Mets are better than the Wilpon Mets of 2015-2020 (I'll include the World Series season instead of the coronaseason as a sign of goodwill to Frank and because fuck 2020) Frank has to hang up his lightly worn Mets hat for good. Frank has already gone from being a Celtics fan to a Suns fan to a Nets fan, so jumping to a new baseball team shouldn't be that tough.

In fact, there's a case to be made that the one purging the Mets out of their lives is the real winner of this retirement match.

The stipulation for this retirement match is that:

1. Steve Cohen's Mets will have more total wins over the next 5 years than the final 5 years of the Wilpons' Mets. We'll throw out the coronaseason because it was shortened and fuck all things 2020, so Frank gets the magical 2015 season instead of last year's final year of the Wilpons where the Mets couldn't make the playoffs in a year where it was literally harder to miss the expanded postseason than it was to make it.

2. Steve Cohen's Mets will maintain a payroll higher than the Wilpons did over that time, which was on average the 14th highest payroll. I'll bump it up to Top 10 as a gesture of good will even though Top 5 is almost definitely going to be the case considering the Mets are currently the third highest payroll in Cohen's first season as owner.

3. Steve Cohen's Mets will make the playoffs more times over the next five years more than the Wilpons' Mets did, which was one postseason appearance and one Wild Card appearance.

The Mets are currently one game below .500 as I write this and are the worst Mets team Frank has seen in 30 years despite already having more wins than the 1993 team had all season. So I imagine Tank has no problem starting the clock on the bet with this season. I will also allow him to start the clock on the bet with next season since Steve Cohen owned the Mets for only a few months before Spring Training started.

I know I will honor this bet because I am a thickheaded Irish + Italian mamaluke and I know Frank will too because he once ate a piece of paper to make good on a bet back when he had 0 YouTube subscribers and we were years away from the INCOMPETENT NJ Transit blessing us by bringing the Tank into all of our lives.

Sentimental Sidenote: Shout out Frank for absolutely transforming his body for the better over the last year. Truly an inspiration to all of us big guys

The ball is in your court, Frank. Put up or shut the fuck up. 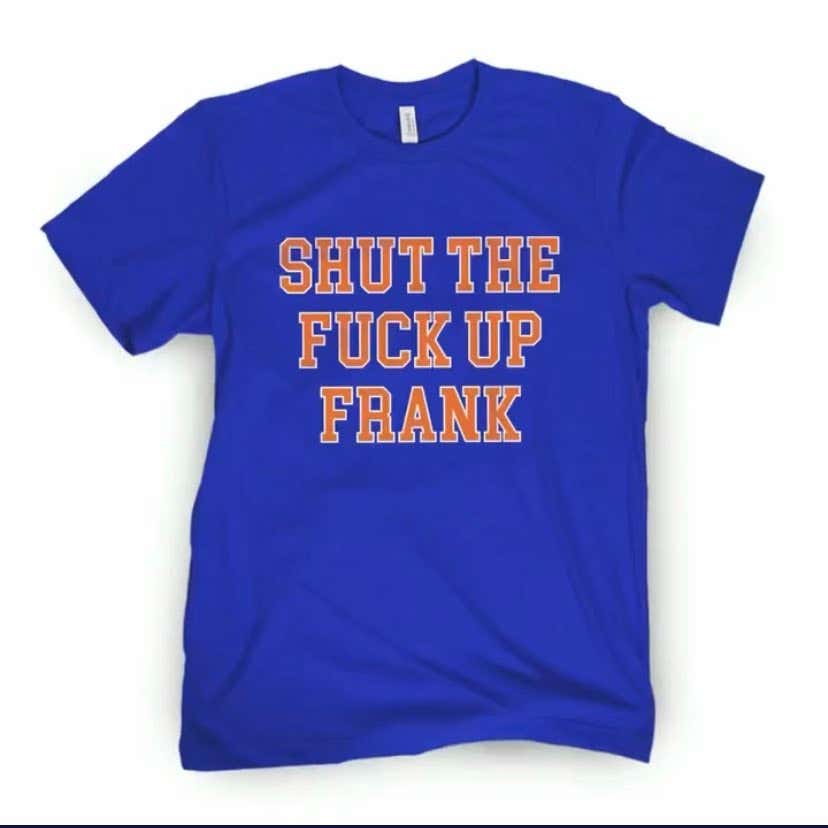 If anybody wants to send this blog to the Mets, I would truly appreciate it. I know a bunch of them can't stand Frank so maybe this retirement match will be what's needed to light a spark in those goddamn bats as they treat Frank like the owner from Major League. 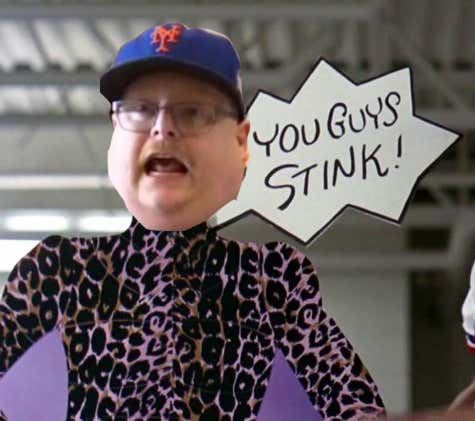