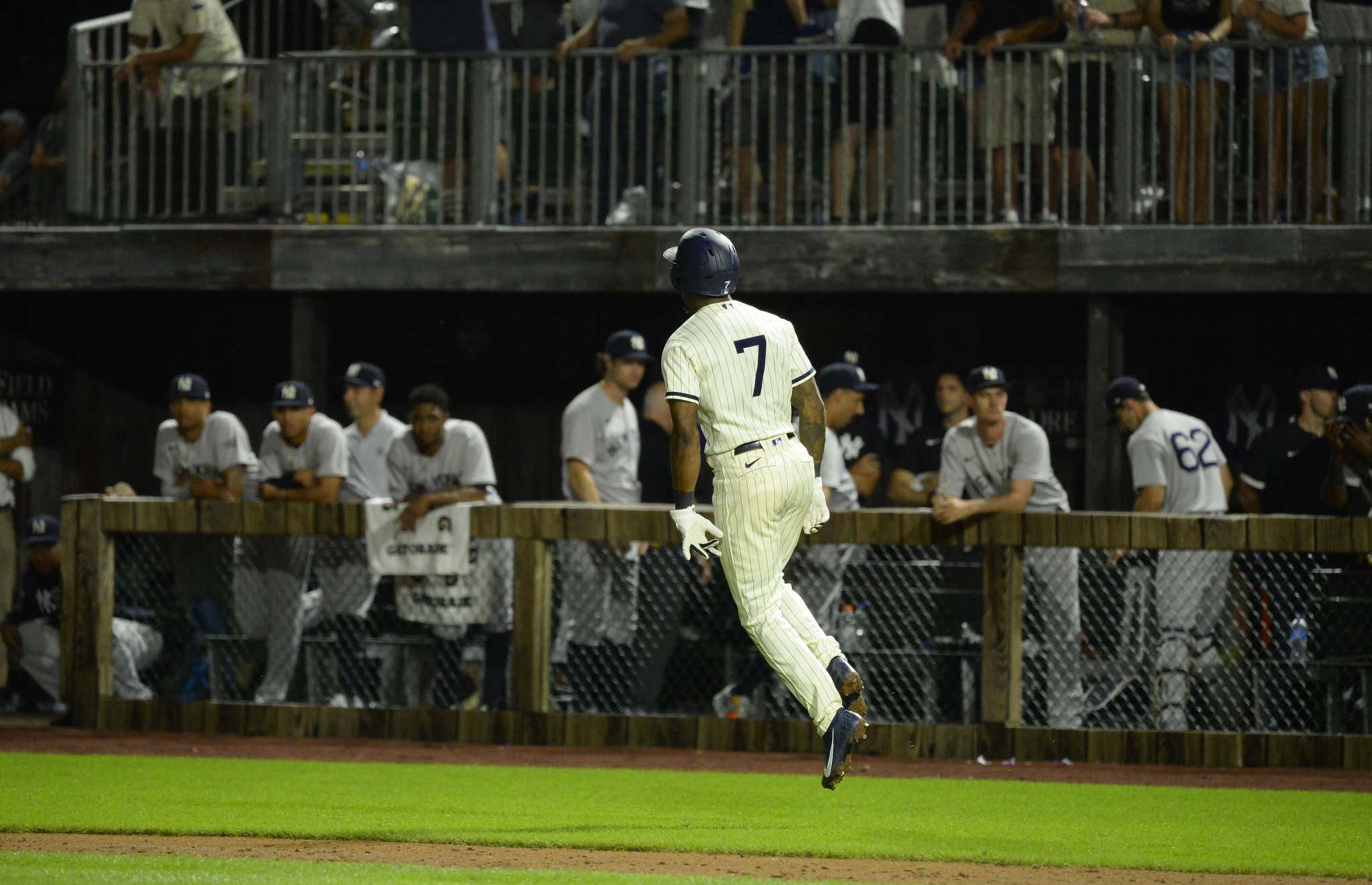 For non-Yankee fans out there Thursday's Field of Dreams game had everything you could have ever asked for. The spectacle of it all was a massive home run and of course the theatrics of the game itself were can't miss. Probably the most entertaining mid-season game I can remember given everything that went into it. Now if you're a Yankees fan, however, you wanna jump in the river, and this isn't the first time this year you want to do this…it's probably about the 8th or 9th unfortunately.

The Yankees started Andrew Heaney who is in my mind the single worst pitcher in Major League Baseball. I honestly challenge you to find someone worse. Give this asshole spider tack and steroids and I bet he still finds a way to get rocked. He was shelled for seven runs, all of which we expected him to give up. Through 15 innings with the team he's given up 15 hits and 15 runs. If George Steinbrenner was still kicking he would leave this bum in the middle of the corn field as the team bus drove away. Heaney had to start this game because of the Yankees' fucked injury situation. Basically he's alive, healthy, and technically can throw the ball forward to the plate. Those are basically the qualifications to be in the rotation at this given time.

Even with his expected incompetency on the mound, the Yankees offense found a way to take a lead in the 9th inning behind two, two out 2-run bombs from Aaron Judge and Giancarlo Stanton. It happened so quick…

Insane. Just insane. The Yankees were all of a sudden three outs away from their best win of the season. It would have been the first win they've had all year after trailing by 4 runs or more. Now in a save situation, Boone opted to pass on bringing in Jonathan Loaisiga for a reason I'm still not sure of. JL has easily been the team's best reliever, but he was left in the pen for Zack Britton, who has been plagued with control issues all season. Britton faced the 8-9-1 hitters, all righties. THE WHITE SOX MASH LEFTIES. EVERYONE KNOWS THIS. Nope, gotta go with Britton and leave the best arm in the pen. Shoot me. You bring Loaisiga in and there's zero room for second guessing. None.

After retiring the first batter, Britt jumped ahead 0-2 on the White Sox number 9 hitter. In classic 2021 Britton fashion he lost him and allowed the hitter to reach on a one out walk. That brought up the heart and soul of the White Sox in Tim Anderson who proceeded to blast this baseball into the corn to end the game. Just like that back to eternal sadness, a feeling Yankees fans are way too familiar with this season.

You couldn't write a better script! Yeah if you want the end of the movie to be me tying a cinder block to my ankle and jumping off a bridge. Some of you probably would like that and that's fair.

This game was fucked. I wish they just lost 7-4 and went 1-2-3 in the 9th off Hendriks. You really had to tease my heart like that? Those Judge and Stanton homers were fucking unreal. I felt alive. They were this close to gaining another game on the Sox and moving further ahead of the Jays. Nope, instead you blow that opportunity and a boat load of momentum. Whatever.

So what did Boone have to say about all this? I'm not mad enough as it is, let's find out!

THAT RUINED IT A LITTLE BIT, HONESTLY.

Uh….you fucking think dude? Who gives a shit about the whole day with Costner, the intro and the field.

Alright it was still very sick and still gives me goosebumps, but fuck man. You lose like that and you think it all got ruined just a little bit? Fuck outta here with that. I'm devastated. The little life I have left in me from this season is waning. How many of these losses can we deal with as a fanbase. Fucking killing me.

At least Andrew Heaney knows he sucks. No dancing around the outing, yup I just didn't do a single thing to help us.

Reminds me of Rob Schneider's food delivery character in Big Daddy. It's not his fault he can't read just like it's not Heaney's fault he started this game. It's not his fault he's on this team. It was well documented how bad Heaney was and Cashman still thought he could help this team while people were sick or hurt. Nope, not at all. Every game is massively important and this fucking bum is going out every 5th day sabotaging any chance the team has. Dude's a train wreck, but I bet he still makes another start (probably next Wed vs. Bos).

Do the right thing and leave Heaney + Britton in the corn field and let's move onto Chicago on Saturday.

We put out a quick 20 min reaction pod to the game and all that it was. Listen to our tears as per usual here below.