Real quick for those of you who don't know what's going on: DaBaby went on a homophobic rant during his Rolling Loud Miami set last weekend. Here it is...

If you didn't listen, which I'm assuming most of you didn't, he basically said "if you didn't show up with AIDS and aren't sucking dick in the parking lot, put your cell phone light in the air." It's important to note that he himself didn't put his cell phone light in the air, but that's neither here not there. Celebrities including Dua Lipa, Demi Lovato, Quest Love, Miley Cyrus, Elton John and others quickly took to social media to condemn the comments...

Which probably would've been the end of it until DaBaby WENT ONLINE TO DEFEND HIMSELF.

He also did an Instagram live that I'm not going to include, but that's not even the worst part. The worst part is that convicted felon and accused rapist/sex trafficker T.I. then got in the ring along with Lil Boosie, and Swaggy P of all people to not only defend DaBaby, but take shots at Lil Nas X seemingly out of nowhere.

"If you gonna have the Lil Nas X video and him living his truth, you gonna damn sure have people like DaBaby who gonna speak their truth," he said. "Ain't nothing wrong with none of it, it ain't got to be no hate — it's all honesty. Everybody living in their truth."

You can watch the entire thing HERE. Boosie also did his own Instagram live where he said the following…

(Lil Nas X) a “lil f****t ass” and “the most disrespectful motherfucker in the world.” He also proclaimed, “If I’m at an awards [show] and he go up there naked, I’ma drag his ass offstage and beat his ass.” 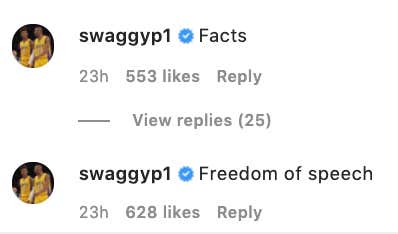 If you've stuck with me this far, congratulations, because here's where Lil Nas X came in and dunked on everyone in sight.

Boom. Simple. Effective. Hilarious. And to add insult to injury….

Nailed it. He's also been retweeting and replying to all the negative comments with a link to Industry Baby which is currently the number one streamed song on the internet. I'm not sure what else to say here other than ignorance is not culture. You're free to speak your mind and express your opinion, but if your opinion sucks, don't be surprised when you get ripped for it. DaBaby has since been dropped from the UK Parklife Festival as well as his clothing line, boohooMAN. Sucks to suck. Take it away, Nas!