Rough N' Rowdy 17 | 48-Hour Replay With All PPV OrdersBUY NOW
This week's episode of Twisted History is all about Las Vegas.  And when it got to the point in the podcast when I began talking about the more infamous murders that took place within Sin City's limits I couldn't help but go into great detail about the untimely death of former heavyweight champ, Sonny Liston.

You can listen to it at your leisure, or read about it now.

For those too young to remember, Sonny “The Big Bear” Liston was a legendary heavyweight boxer.

You've seen him before but probably didn't realize it because the most famous photo ever taken of Sonny was not at his best angle... More on that in a second.

There are no official records of his birth… His home state of Arkansas did not make birth certificates mandatory until 1965, but people believe he was born sometime around 1930-1932.

His father Tobe loved to fuck.  He had 13 children with his first wife and another 12 with Sonny’s mom… Sonny was the second youngest... Meaning Sonny was number 24 out of 25 kids.

The only thing Tobe Liston loved more than fucking was beating kids... He inflicted whippings so severe on Sonny that the scars were still visible in the ring decades later as an adult.

Sonny couldn’t read or write because his father worked him in the fields from the time he could walk… Years later, he got his wife to teach him how to sign his name just so he could give it to kids who asked him for it his autograph.

Around the age of 20, Liston inevitably turned to crime and led a gang of young urbanites who committed muggings and armed robberies… He was eventually caught and sentenced to 5 years in prison.

He got out of prison in ’52, won the Golden Gloves in Chicago, and went pro after less than a year… Unfortunately, the only financial backers willing to put up the necessary money for him to turn professional were local mobsters, and Liston supplemented his income by working for the local mob as an intimidator-enforcer.

He was a bit of a physical freak… He was 6 ft 1 in with a disproportionately long reach at 84 inches. His fists measured 15 inches around, which was the largest of any heavyweight champion. Sports Illustrated once wrote his hands "looked like cannonballs when he made them into fists." 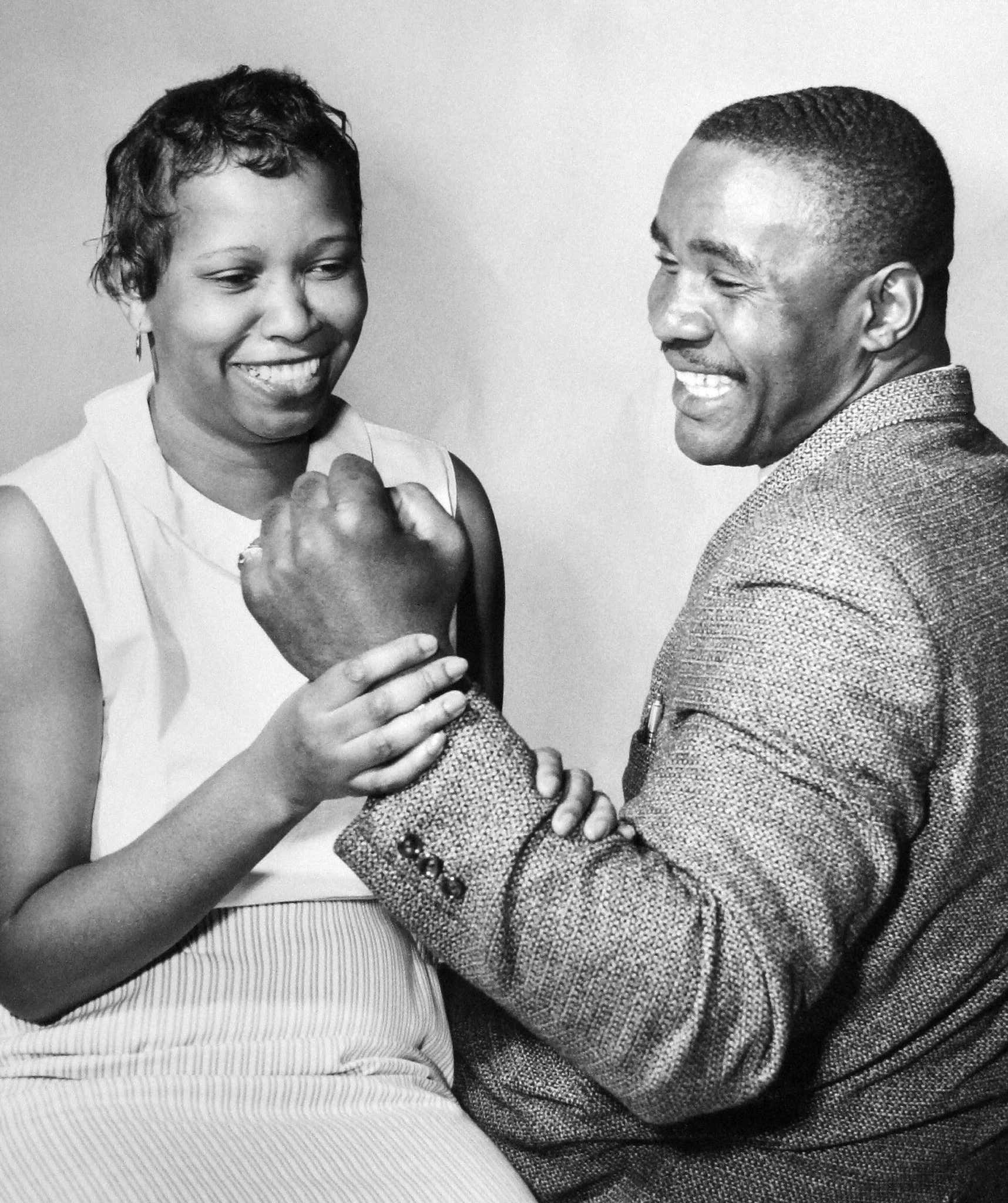 ("You know what they say about big fists, sweetheart?")

Liston had a noticeably more muscular left arm, but fought orthodox… Meaning his power hand was out front, so he had this crushing left jab and powerful left hook.

After some run-ins with the law near St Louis, Liston moved to Philly and picked up a new manager in 1958: another mafia guy named Joseph "Pep" Barone, who was a front man for mobsters Frankie Carbo and Frank "Blinky" Palermo.

Liston stacked up the wins and became the No. 1 contender by 1960, but the handlers of the heavyweight champ at the time, Floyd Patterson, refused to give him a shot at the title because of Liston's links to the mob.

On top of the mob stigma, people were flat-out terrified of Sonny… Fight City named Sonny Liston as the “most intimidating fighter of all time" beating out names of other legendary animals like Tyson, Foreman, and Hagler.  In all, 14 major contenders during his prime refused outright to fight him, the most for any boxer in history.

Patterson finally agreed to meet Liston for the world title on September 25, 1962, in Comiskey Park in Chicago… And everyone had Patterson.

An Associated Press poll had 64 of 102 reporters picking Patterson.

Sports Illustrated predicted a Patterson victory in 15 rounds, stating: "Sonny has neither Floyd's speed nor the versatility of his attack. He is a relatively elementary, one-track fighter."

Floyd Patterson was Ben Mintz's "Minty Lock Of The Week" and Megan Makin' Money loved Patterson in a decision. 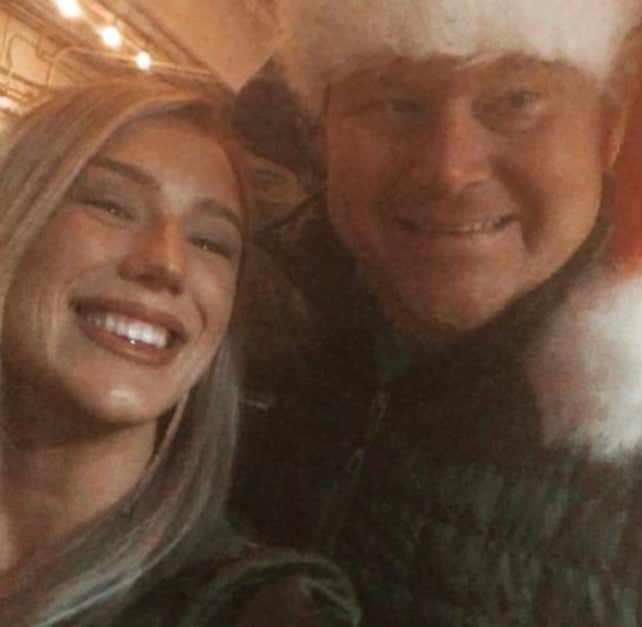 Only a rising contender at the time named Cassius Clay predicted a knockout by Liston in the first five rounds.

Sonny knocked out Patterson at 2:06 of the first round, with that powerful left hook to the jaw… It was the third-fastest knockout in a world heavyweight title fight, and the first time the defending champion had been knocked out in Round One. 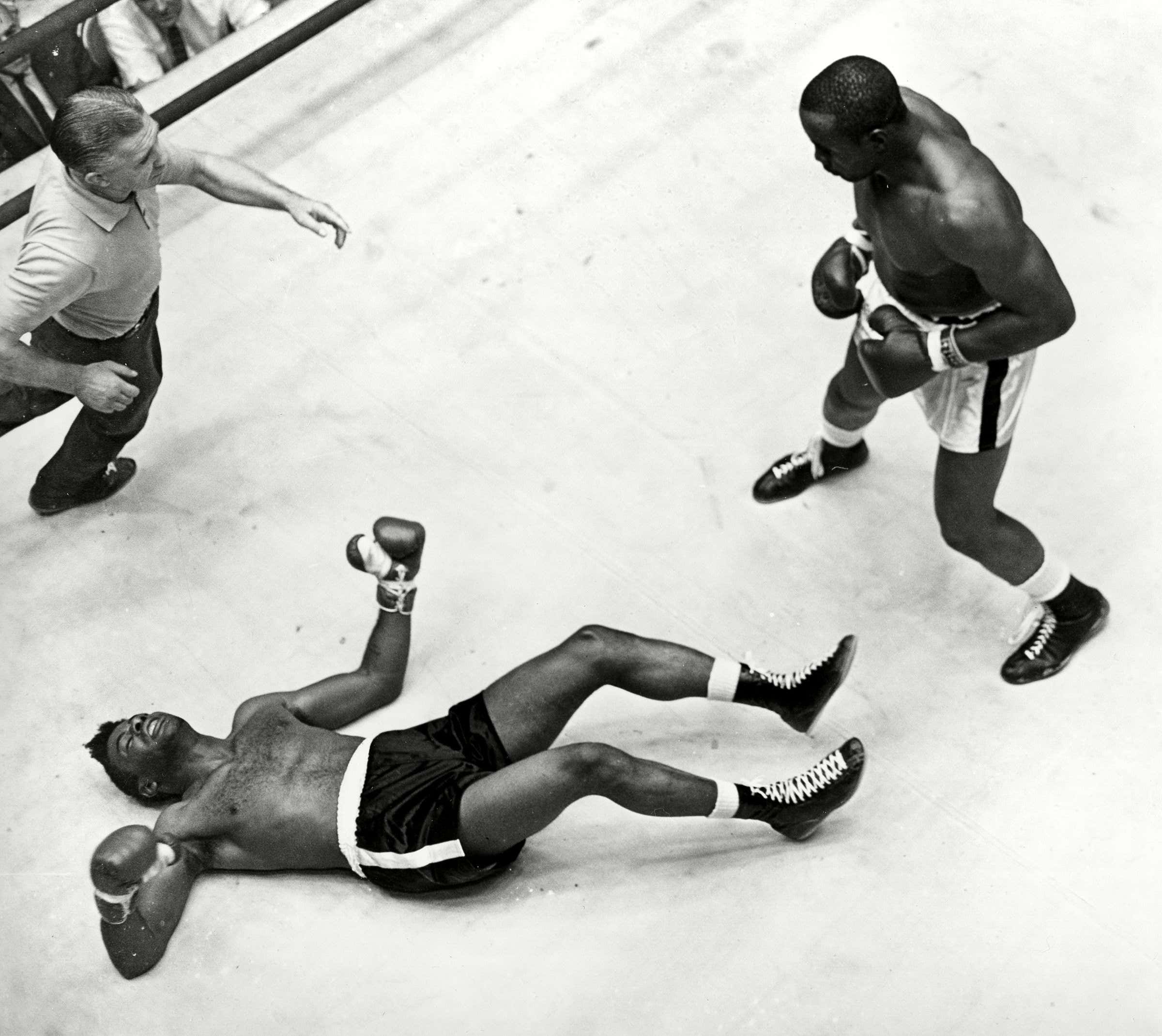 Patterson and Liston had a rematch clause in their contract, so they met again on July 22, 1963, this time in Las Vegas… So that was ~ 10 months after their first meeting. Patterson was knocked down three times and counted out at 2:10 of the first round.

"The public is not with me. I know it", Liston said afterward. "But they'll have to swing along until somebody comes to beat me."

And that guy did come along and beat him… Twice… And it was Muhammad Ali.  Although in the second fight, Liston appears to have taken a dive… Again with the mob stuff.

Both fights were filled with controversy that is probably enough for another blog, but this iconic picture from their fight was the one I referred to above…

You've probably seen it a thousand times, but you may not have known who the poor bastard on the ground was until now.

Liston’s last fight as a professional was against Chuck “The Bayonne Bleeder” Wepner… He was given that nickname because his eye would open up during the National Anthem. The bout was stopped after the ninth round due to cuts over both of Wepner's eyes. 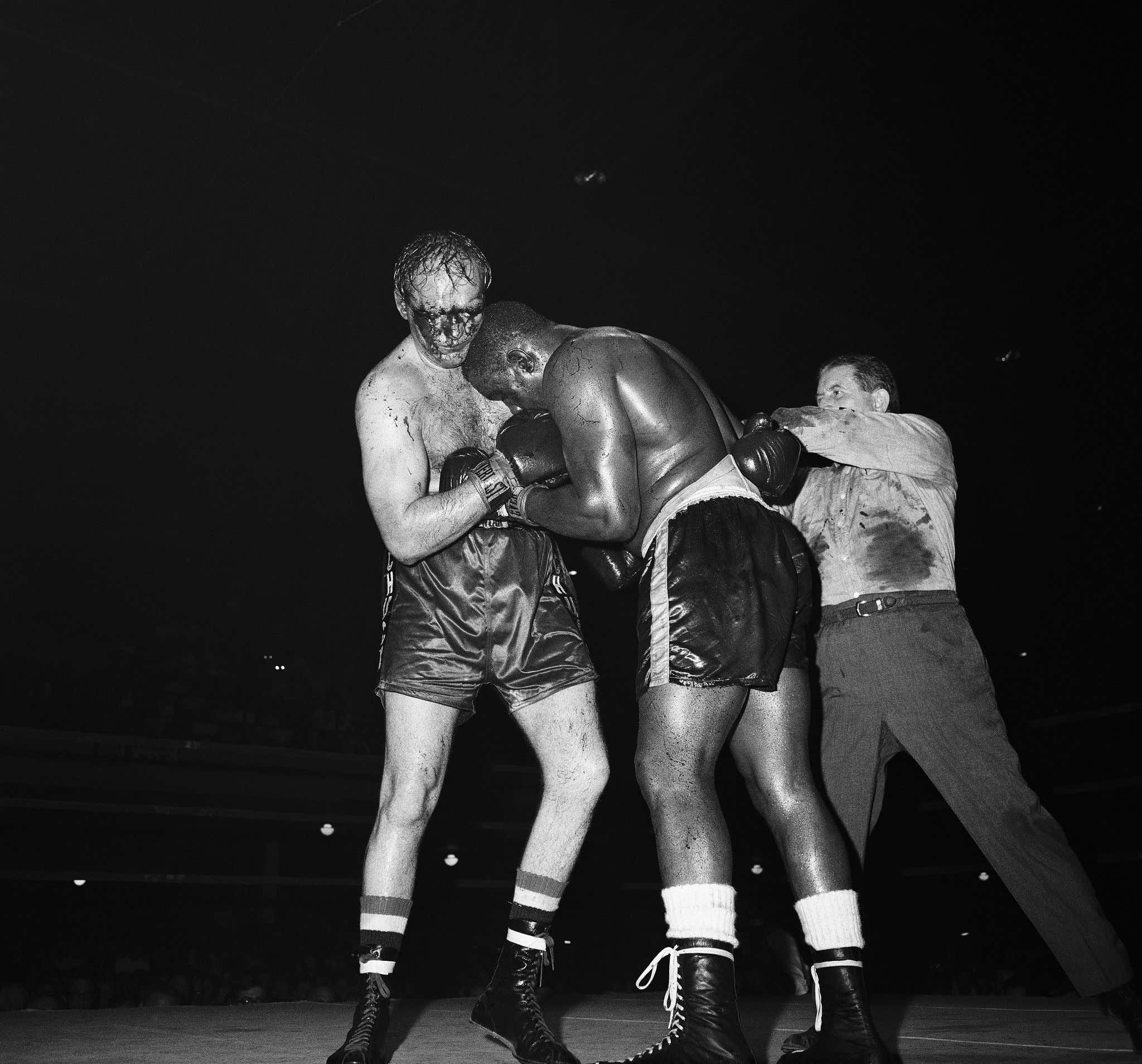 Wepner needed 72 stitches and suffered a broken cheekbone and nose… And the ref needed a new shirt.

Wepner, who also fought George Foreman and went 15 rounds with Ali before being knocked out (that fight was Stallone’s inspiration for Rocky), said after his career was over that Liston was by far the hardest puncher he faced.

Last thing I will say about a heavyweight champ who was an ex-con and a leg-breaker for the mob… He was deathly afraid of needles.

According to Liston's trainer, Willie Reddish, Liston canceled a planned tour to Africa in 1963 because he refused to get the required inoculations. Liston's wife also recalled that her husband would refuse basic medical care for common colds because of his dislike of needles.

Now you know who he is… Here’s how he died.

He was found dead in his Las Vegas home on January 5, 1971… Six months after the Wepner fight.

Liston’s body was discovered by his wife who was returning home from a two-week trip.  The coroner said that there was not a lethal amount of heroin discovered in Liston’s system during the autopsy, but authorities still attributed his death to an accidental drug overdose even though police on the scene could not locate any drug paraphernalia that Liston presumably would have needed to inject the fatal dose… Such as a spoon to cook the heroin, or a tourniquet to wrap around his arm, or maybe a needle that he was fucking terrified of.

SO here are four theories behind who killed Sonny Liston at only the age of 40.

(1) Liston had been deeply involved as a bill collector of a loansharking ring in Las Vegas. When he tried to muscle in for a bigger share, his employers got him very drunk, took him home, and stuck him with a needle.

(2) Liston was murdered by drug dealers with whom he'd become involved.  Sonny was once told by local police to stay away from a drug house that was the target of a police raid. Because of that, the dealers may have thought Sonny ratted on them and they shot him with a hot dose as retribution.

(3) The mob promised Liston some money to throw the second Ali fight, but they never paid him. As the years passed and Liston's financial situation worsened, he got angry and told the mob he'd go public with the story unless they gave him the money. That got him killed.  In 2013 the son of a deceased mafia hitman published a book claiming that his father confessed to murdering Liston via forced drug overdose.

And (4) Liston was supposed to take a dive when he fought Chuck Wepner 6 months earlier, and killing him was payback for his failure to do so.

His death is still a mystery, but Mike Tyson puts flowers on his grave every year at Paradise Memorial Gardens in Las Vegas.  The grave's headstone reads Sonny Liston: A Man. 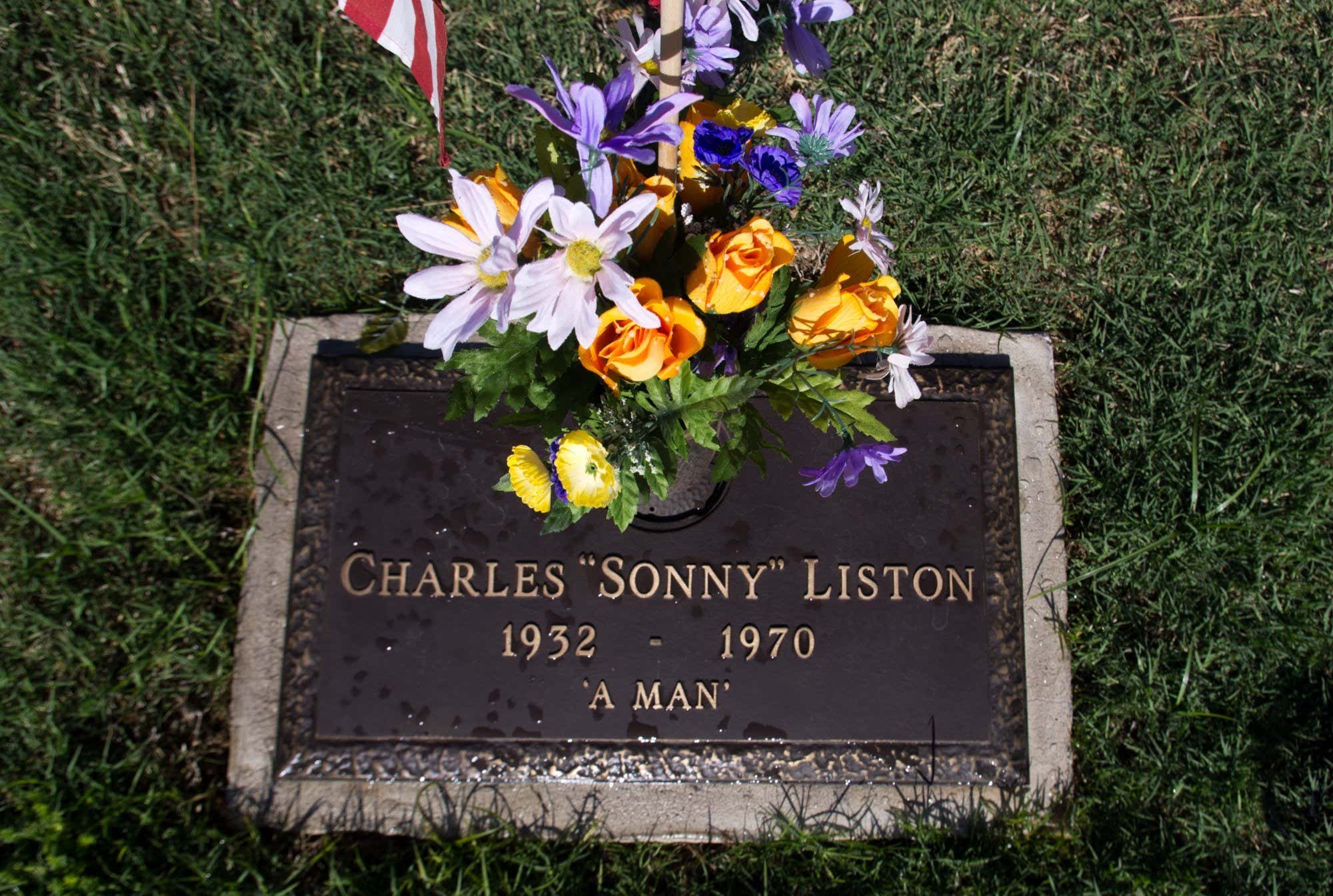 And for music fans, a wax model of Liston appears in the front row of the cover of the Beatles' Sgt. Pepper's Lonely Hearts Club Band… He is seen in the far left of the first row, wearing a white and gold robe. 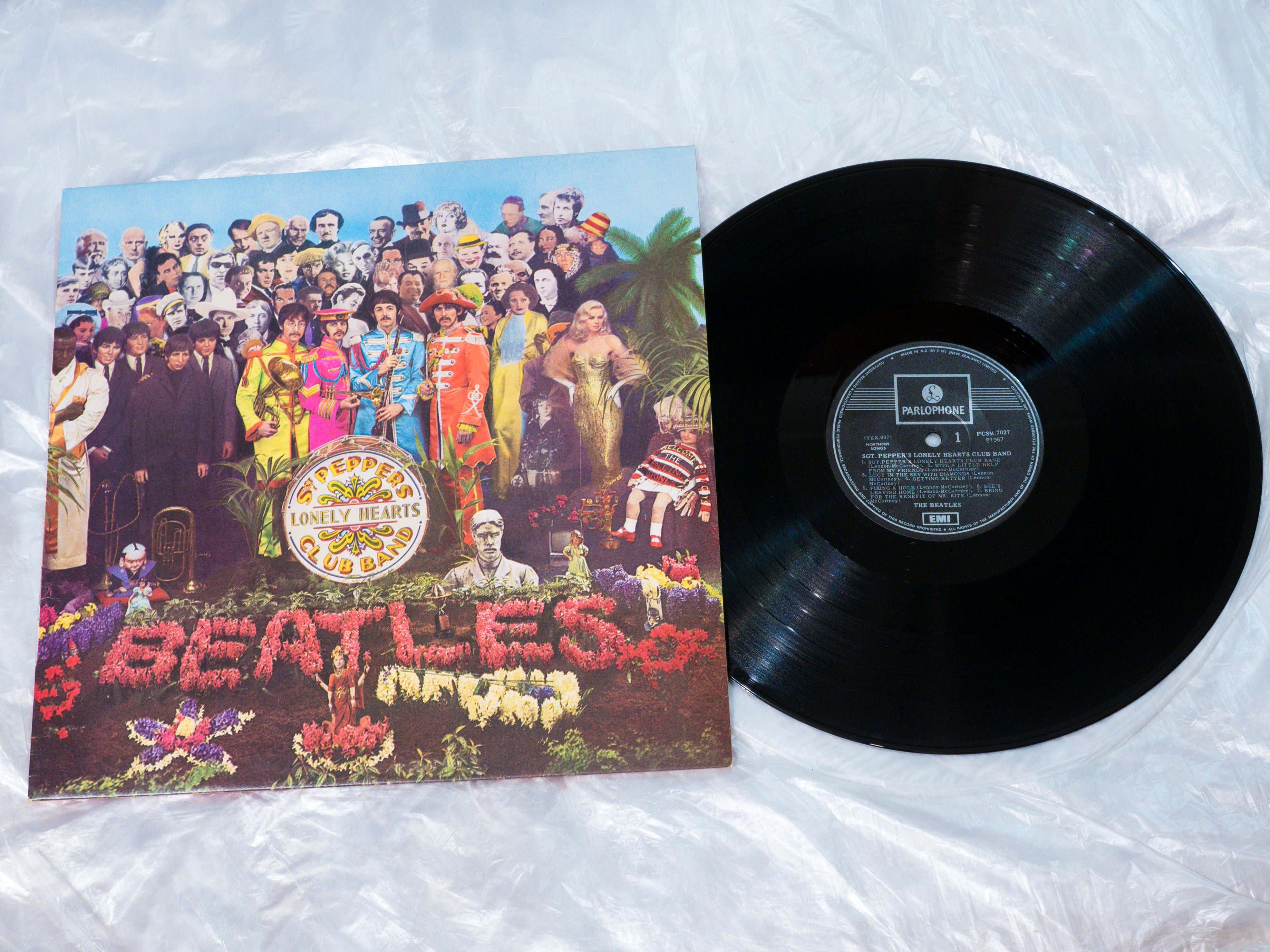 There are a ton of other dubious deaths and (hopefully) little-known facts about Vegas in this week's episode.

Check it out and take a report.