On today's episode of the Barstool Bench Mob, we cover a plethora of offseason topics around college basketball. Kansas makes a big splash in the transfer portal with Arizona State's Remy Martin, Louisville is in the midst of another scandal, and Mac McClung locks in his destination for next season: the NBA.

Another topic we touch on has to do with one off the court, in fact, it really doesn't have to do with basketball. Michigan's Hunter Dickinson is coming off a stellar freshman season in Ann Arbor. The B1G Freshman of the Year and AP All-American was enjoying his time off down in Miami last week and posted the following on Instagram:

Rico Bosco was not initially a fan of the outfit, making the claim that Dickinson had a "LA vibe" to his post. 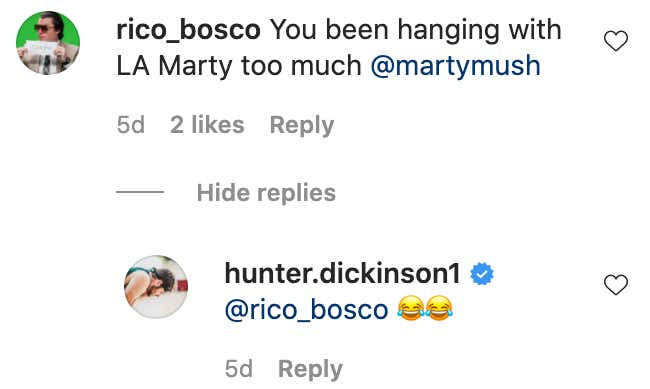 This is interesting, because I feel like there are two clear sides to how college basketball players dress off the court. You have guys like Dickinson, who pose for a photoshoot in sunny South Florida, and then there are other players who you will ALWAYS see in their team gear. Tee shirts, hoodies, joggers, jumpsuits, etc. Whatever it is, and no matter what corner you turn, you'll see a portion of student-athletes rocking their team colors and gear.

Can we expect some more trendy pregame outfits from Hunter Dickinson next season? Only time will tell.