We recorded our first post game show of the year immediately following the game last night, and needless to say, Carl is in on Mitch. I've heard it, you've heard it, we've all heard it. It's impossible to miss if you follow him on social media, the blog, or on any of our podcasts or radio shows.

Go and listen to the episode:

I got a major beef with him right now, with all due respect to a popular sandwich in the greater Chicagoland area. I sent this tweet yesterday after THE FIRST MITCH PASS OF THE SEASON:

Clearly a joke and half assed tweet. But it's because I can't stomach insincerity, so I felt obliged to construct this blog. But the title of the blog was this, and before you read it, make sure you're sitting down. You might not be able to handle this HYPOCRICY:

A Lot of People Owe Mitch An Apology

These days, Carl won't stfu about being in on Mitch Trubisky. Save for the fact that nobody in their right mind was "in" on him going into the season, at least not in terms of *actually* thinking he was going to finally play like the 2nd overall pick is expected to, the only people that say they are "in" on him are saying so because this was the year to sink or swim with him. I am one of those people as I know there isn't really an alternative option.

But Carl... Jesus fucking Christ, Carl. I mean this fucking guy. Just won't stfu about him being "in" on the exact same QB he SHIT on the vast majority of the 2019 season. That's not to say that he shouldn't have shit on him, it's to say that he is so goddamn wishy washy and I refuse to let him fool the people.

Let's get to specific examples:

Fast forward to about 10 mins, 19 seconds. Carl just roasted him every which way. Says his mechanics suck. Calls him dumb. Says he has no idea how the NFL works. Not very "in" like. Fuck outta my face.

Fast foward to 1 min, 15 seconds. Carl says the only time Mitch looks somewhat confident or is "worth a shit" is when he's in a 2 minute drill offense. Says he's a "joke". Blames the defensive shortcomings in this particular game on Mitch not being able to stay on the field for any extended amount of time which would allow the defense to catch their wind.

He says "Mitch sucks" at the 5:30 mark. Shaking my fucking head.

Just listen to the whole show. He's out, out, out on Mitch.

Carl says he'd rather have Jameis Winston than Mitch, which isn't true, but clearly isn't "in" on Mitch.

Carl says he was watching Ben Roethlisberger highlights on YouTube and claims he was completing passes Mitch couldn't dream of making.

That was basically it from our postgame shows last year. But check out these tweets!! 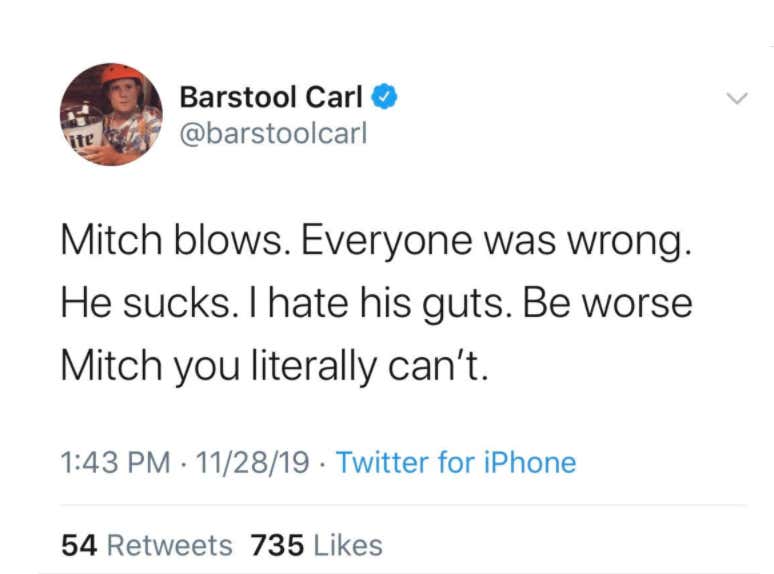 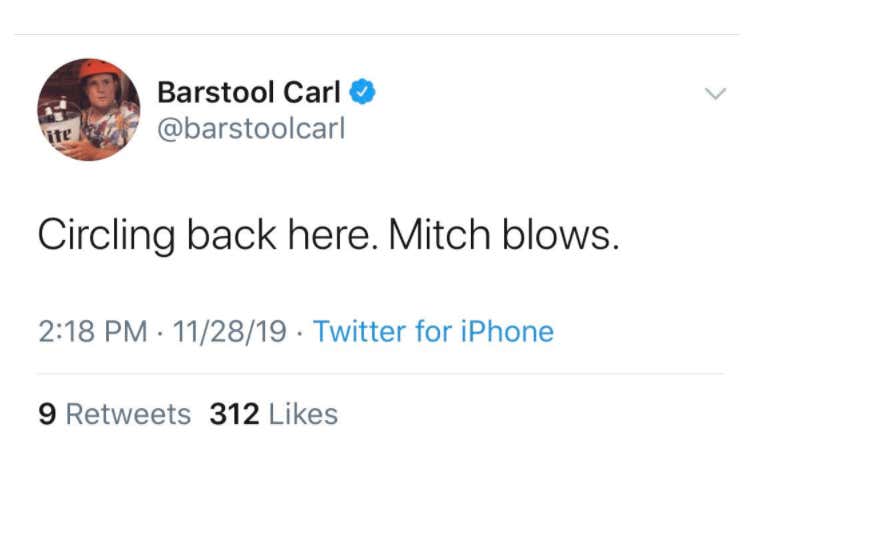 My GOD!!!!! I mean he's not wrong but he's definitely not IN ON MITCH!!!! Now Mitch looked great for a quarter this week vs. Detroit. He was so good and that go ahead touchdown pass he hit Miller on was maybe the best pass of his career. Can he keep that momentum going? Probably not. But there's at least a glimmer of hope. He's healthy, which he wasn't for much of 2019, and with no crowd noise (boo birds) raining down on him each week, maybe the pressure of playing for his NFL life isn't as much as it would be in a normal season. We'll see. Here's to being hopeful. But don't let Carl fool you. He ain't in on Mitch anymore than anyone else is.

So Carl… If ANYONE owes Mitch an apology, it's YOU!!!

Now with that said… buy a shirt: